From Hong Kong to Waiheke: Sarah Judkins is back home among the grapevines (and arts) on Waiheke Island Zach, Sarah, Madi and Jason Judkins enjoy summer on their Waiheke property even more now they don’t have to manage the syrah vines — that’s done by Kennedy Point Vineyard next door.

A third-generation Waiheke Islander has her feet firmly planted on the soil. However, her head and heart are often off with the arts — in a supporting role at least.

There’s a batty nursery rhyme about a little old lady swallowing creature after creature until she dies after eating a horse. Well, of course, she died when she swallowed a horse.

Ask Sarah Judkins why Roxy, an aged and badly behaved highland heifer, has the run of the home paddock on her busy family’s Waiheke Island property, and she quotes that nonsense poem (although she is much too young to have heard Burl Ives crooning it on the BBC’s radio show Children’s Hour at its peak popularity in the 1960s).

Old Lady Who Swallowed a Fly

“We got Roxy because of Sammy, the labradoodle who chased the sheep, who were supposed to eat the grass beneath the grapes, which Mum owned. The sheep that is — that Mum owned. (We owned the grapes.)

“But when Sammy started chasing the sheep, Mum got the huff and took her sheep home, so we got some highland cattle to eat the grass under the vines. But they don’t do that, they use their big horns to lift fences and move netting off vines and then eat the grapes, and then they eat my garden. They eat everything except the grass. Of course.” Sammy, the labradoodle, now in contented middle-age, is no longer an annoying sheep-chaser, preferring to rest in a sunny patch until family entertainment begins.

When the grapes are of a fine syrah variety destined for the premium wines of Kennedy Point Vineyard, only so much illicit net-lifting and fruit-scoffing can be tolerated. The cattle were dismissed and sent to a home for wayward heifers. Except for Roxy — quite how she got to stay is forgotten, but she did.

Dolly the donkey, Roxy’s paddock mate and criminal accomplice, also mihis back to Mary Stevenson (Sarah’s mother), who bred donkeys on Waiheke Island. Waiheke is not often noted for its donkey breeding, and Sarah thinks the donkeys’ heyday ended when alpaca supplanted them in the islanders’ affections. Fortunately, Sarah’s father, architect Ron Stevenson, knew a lot more about the requirements of a family home than Sarah and Jason when they (pre-family) asked him to design them one. From their busy corporate lives in Hong Kong, they dreamt of space, light and a connection to nature.

Dolly, the last of the donkey foals, made an appropriate dowry for a daughter of Waiheke such as the third-generation Waihetian Sarah (nee Stevenson) on her marriage 22 years ago to Jason Judkins, formerly of Tauranga. Jason might well be the last bloke in New Zealand to have received a dowry of a donkey, and Sarah is likely to be the only Waiheke bride who came with one.

Little did they know such distinctions lay ahead when the pair met on their first day as fresh-from-uni interns fronting up at Westpac’s Auckland corporate finance division. Was there a hint, perhaps, when Jason (sometime later relocating for a better job to Wellington) cast around among his friends for someone special to be given custody of his extensive collection of houseplants? The plants didn’t make it, but the relationship did. It survived the demise of the houseplants and the receipt of a donkey dowry and many years working abroad in Hong Kong (both for KPMG) while dreaming of a one-day home on Waiheke.

It positively flourished on a trip back to the island for a friend’s wedding and was further consolidated when the couple spied a “For Sale” sign on a property not far from Sarah’s family home in the valley between Surfdale and Palm Beach.

They saw it once and immediately loved its stand of native bush and thought it had something special. They left New Zealand, heads full of the property, for a planned birthday holiday in Thailand to celebrate Jason turning 30. Soon their hotel fax machine was pounding with the back and forth of sale and purchase documents, and they sat on a beach in Thailand dreaming of the family home they would build for their yet-to-arrive family. 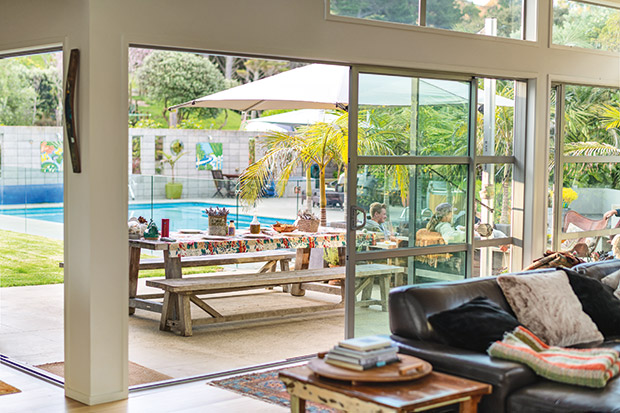 The family eat most of their meals outside, often cooked in the pizza oven. Everyone loves fig jam pizza (made with homegrown fruit) and blue cheese, pear and pinenut pizza.

Back they went to Hong Kong and got on with the task of saving to pay off the property and planning that new home in conjunction with another member of Sarah’s extensive, creative and useful Waiheke-based family — her father, architect Ron Stevenson.

“We were trying to visualize what it would be like to have a family. Luckily, Dad had a much better idea of it than we did.” Ron persuaded them to move the existing house forward on the four-hectare site and create a flat building platform — a genius move, Sarah notes with hindsight.

On their many return journeys to the island to see progress on their new home, they struck up a great friendship with neighbours Neal Kunimura and Susan McCarthy, founders of the Kennedy Point Vineyard. One night, after a glass or two, the subject of Sarah and Jason planting half their land in syrah grapes for Kennedy Point was suggested. “Oh, it’ll be easy,” they were assured, “and we’ll help.” 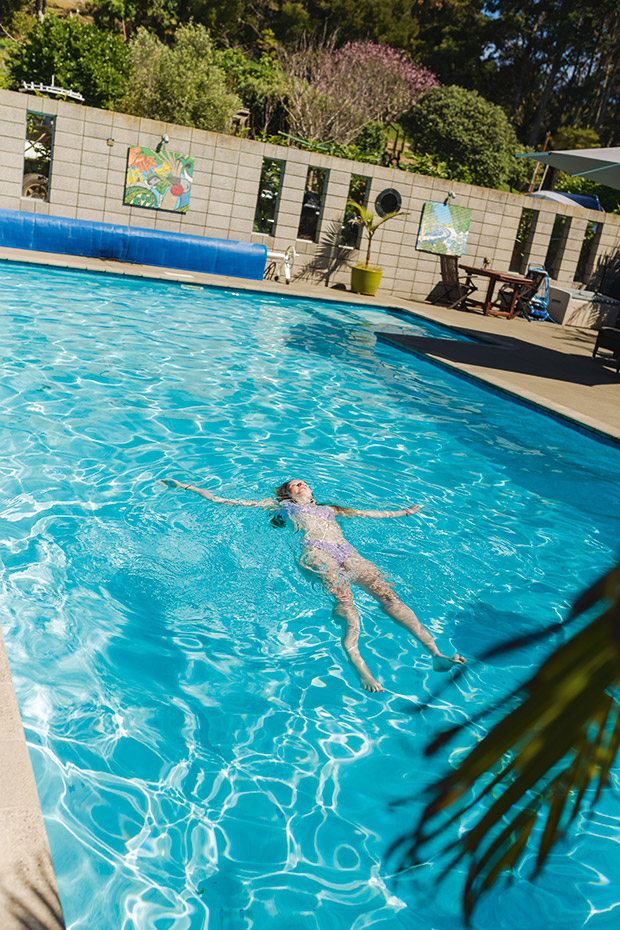 And thus it was that Sarah returned to Waiheke Island on the midday ferry with first child Zach (having fled Hong Kong along with all ex-pat KPMG staff in the face of the pandemic threat of the day, SARS 2002) to learn that their newborn syrah vines were following her and arriving on the 2pm ferry.

“No, I didn’t plant vines on the day I arrived home from hospital with my newborn, but Jason did. I think I made scones. The thing was, we didn’t think we had yet got to the ‘commitment stage’ on the idea of planting grapes — and then they arrived.”

It is just one more thing this couple took in their stride as life straddled Hong Kong, new babies, long-distance building, property management and viticulture. By 2007, the island’s call was too strong for them to ignore, despite their fondness for the East. 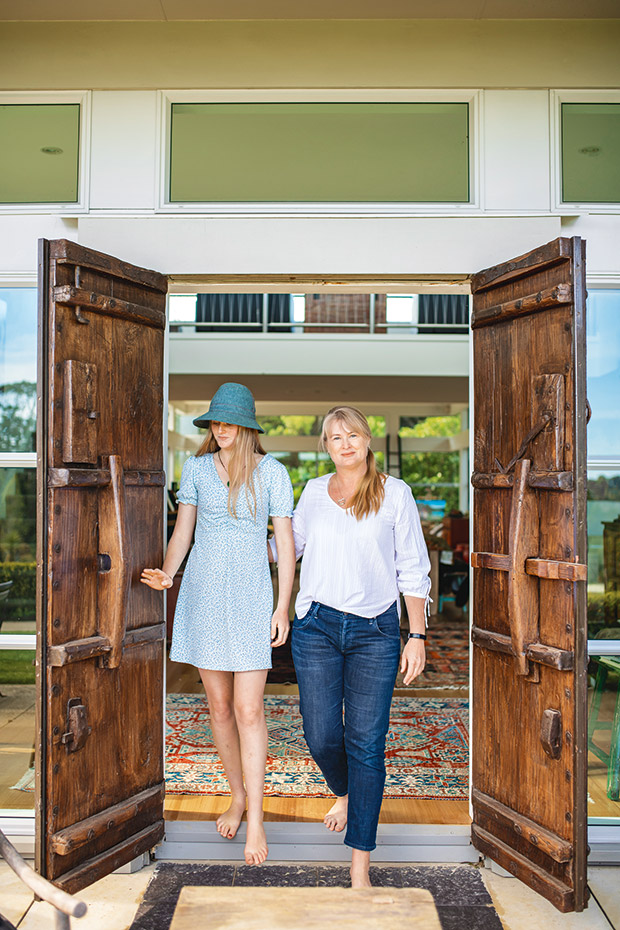 The needs of two small children were likely to be better met on an island of 7500 residents an hour by ferry from Auckland than on an island of 7.5 million, an hour off the coast of mainland China. Jason headed up Yealands Wines while Sarah took on the thorny task of reimagining the business of media with a strategic management role at what would become NZME (owners of The New Zealand Herald, radio stations, websites and regional newspapers).

Alongside the challenges of senior corporate roles, now undertaken on behalf of Fonterra (as head of mergers and acquisitions), Sarah and Jason (today, CEO of Hop Revolution, grower and producer of flavour-intensive hops for premium beers) have maintained production and management of grapes and children (Madi, their daughter, arrived 15 years ago). But the day-to-day management of both is now out-sourced (vines to Kennedy Point Vineyard and offspring to St Peter’s School, Cambridge). 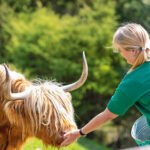 Roxy, the wayward highland heifer, waits for treats at the gate after Sarah’s morning walk. 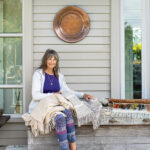 Sarah’s mother Mary Stevenson has shorn sheep, spun their fleeces and created rugs and throws to sell at the Waiheke Island Gallery. 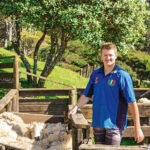 Zach was initially drafted into shearing duties with his grandmother to hold the sheep in place. Now he shears them himself. 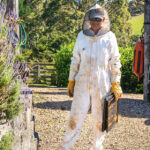 Jason, the family apiarist, learned his trade at Taylor Pass Honey Co in Blenheim. One hive supplies enough honey for the year.

More stories you might like:
Bean tales: How Crete beans made their way to New Zealand in the name of love

This leaves Sarah and Jason a little time to pursue that other great hobby always percolating in the background, their love of the arts. When she arrived home, Sarah wanted to become more involved in Waiheke life, so she joined the local art gallery board — the gallery runs the successful bi-annual Sculpture on the Gulf — then six years ago, she joined the Auckland Arts Festival board.

“My family has always been creative, and even though to some extent, I have a boring finance job (though I love working with the passionate people at Fonterra), I have always wanted to be creative. I know I am not really, but I love the idea of it.”

During the long winter and spring pandemic pause of 2021, Sarah and daughter Madi set out to discover if they had inherited the family’s creative genes. A pottery wheel discarded in an old shed was hauled out, dusted off and pedaled into action as the pair began making small clay figures that they later painted. “I never want to get so busy that I am not doing things myself; that is where my passions lie in creating these gardens and this property,” says Sarah. “Waiheke is my home always, and it is nice to have that sense of belonging. It was exciting buying the property so long ago and knowing that would always be a family home for us and our kids.”

The jury is still out on whether the artistic genes are there or not, though Sarah says Madi is a natural and shows better potential. In this period, they also mounted a family competition to decorate one of four letterboxes made by Jason in his extensive man-shed workshop. The mailboxes were for four old cottages being restored on Great Barrier Island, where the extended Stevenson and Judkins family holidays every summer.

“This forced downtime, when the kids were at home and with us, was a blessing in many ways. We are very lucky to still have a job and the ability to work remotely, but it was tough on my team with young children. That is what I think is the hardest, and I don’t know how they do it, to be honest. It was challenging and hasn’t been a blessing for every sector. “I’m just grateful for the brilliantly clever artists who do interpret what is happening globally and give us all some sense of the world. This is where I feel I can be of use, making sure their voices — their art — see as much light of day as possible. The arts have been so badly affected with events shut down and no exhibitions. I want to bring my business skills into helping where I can.”

SCULPTURE ON THE GULF Sarah, who helps organize Waiheke’s bi-annual Sculpture on the Gulf, says she can’t claim artistic talents herself, but she is hugely grateful for those of others. The 1.6-kilometre Sculpture on the Gulf walking trail hosts a temporary collection of works by the who’s who of New Zealand art.

It starts at the Mātiatia ferry terminal, can be steep and narrow, and shade is limited. It is very popular (attracting 65,000 people in 2017), so consider a mid-week walk as a more peaceful opportunity. See the many fine sculptures and beautiful properties along the route and enjoy the glorious view south across the Hauraki Gulf to Auckland City. sotg.nz