The stone glasshouse in the hills above Lake Hawea 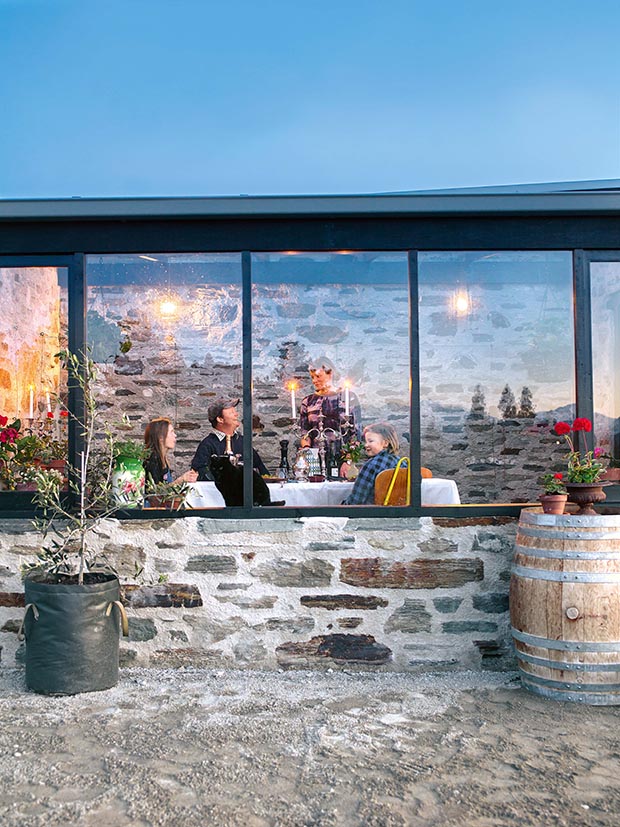 So she said: ‘I’d really like a stone glasshouse.’ And he said: ‘Sure, I know exactly what you mean. I’ll build it.’ And he did.

Across a crowded room, in the country’s premiere party spot beneath southern mountains alongside a chilly lake, a brickie from Surrey with a public-school accent caught sight of a beautiful young woman – a trained nurse and former medical rep who was, at that time, a student of textile design.

She’d previously left her home city of Dunedin, gone nursing in Auckland, become a medical rep in the North Island and then, acknowledging her unrequited passion for fabric, returned to Dunedin to study textiles.

Having just earned his bricklayer’s ticket, he’d left Britain for New Zealand to visit mates he’d met during their OE stints as barmen in London. On arrival in Wellington, he worked at Three Foot Six (part of Weta Workshops) where his skills as a stonemason came in very handy on the sets of the first two Lord of the Rings films. He says, with endearing self-deprecation: “I was just moving tussock around.” She interrupts to say: “He’s a natural artist and that’s why they wanted him on the film sets.” 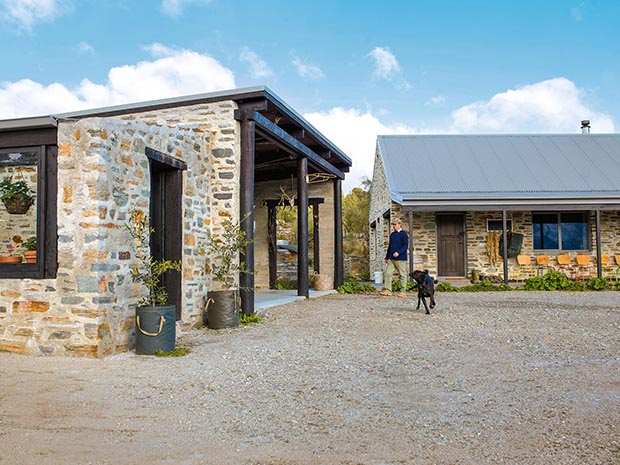 Ros says every area of the house gets used all year round.

He was heading home to Britain but, on the advice of his mates, he went via Queenstown for a bit of southern grandeur and a touch of nightlife. It was the outdoors that initially hooked him. “I started fly-fishing the high-country rivers and got completely obsessed. I’d have one week in the hills and then one week in the valley of sin – that’s Queenstown.” Which is where Jimmy met Ros. “And that,” he says, “was double trouble. I had no intention of staying. I’d come to see buddies, have a bit of a fish and go home.”

Her textile design career was put to one side, and she opened a tiny café in Queenstown called BIG before launching a catering company which she loved (said with emphasis) and then started nursing again (at Queenstown Hospital). She also ran an online clothing label called Rosalind Nelson (now Scarlett & Victor). That party was 13 years ago. Victor, Ros, Jimmy, Scarlett and Oscar the dog on the “deck” of their home. As stone is such a brilliant insulator, the house stays cool in summer, and the only heating needed in winter comes from a wetback stove.

At first, Jimmy Edwards wanted just to fish – and fish, – for the rest of his life (well, in addition to the alternate week-off visits to the fleshpot of Queenstown).

“But I couldn’t find a fishing buddy for love nor money. Everybody loves hunting around here, but there are not many fishermen. So I hooked up with this Glenorchy guy called Geordie Watson, and we set up a fly fishing business called Trout Stalkers.

“We always let the trout go, by the way. I did it for a few years, but I got over guiding. I’d misread it. I’d thought: ‘I love people and I love fishing, there’s the magic duo.’ However, I came to another realization. ‘God, I’m wrong about this. I love fishing, but I hate guiding.’ So I stuck to my knitting and went back to stonemasonry, which is pretty much what I’ve been doing ever since.” 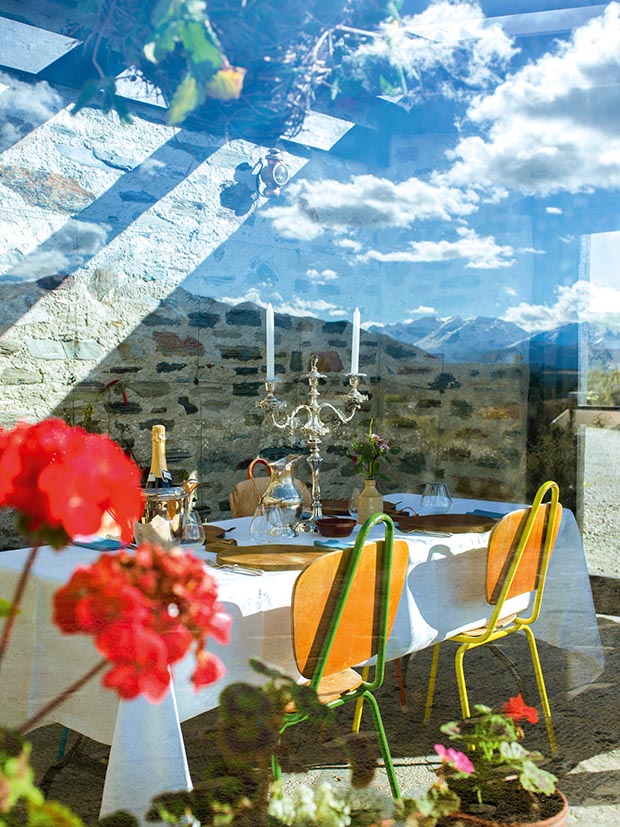 Ros wanted a glasshouse/garden room where she could set up an old trestle table and have a dinner party. Stonemason Jimmy was more than happy to oblige.

Jimmy is a native of the idyllic and quintessential English country town of Shere in Surrey and claims to have become a stonemason for the money. He’s probably joking – which he does quite a lot – because Ros says that he is really an artist and trained as one. He laughs and refers to his education at “Seaford College arts school” (which, upon later Google searching, seems to be a rather well-appointed rural boarding school in Surrey – no mention of the arts). “But actually,” he argues his case, “the older boys in my village were brickies and stonemasons, and they got paid more than the others who worked in the local butchery or as mechanics.”

Whatever. Proof that he’s damned clever with his hands and skilled with an artist’s eye is all around, but then so is proof of Ros’ cleverness. In addition to the very junior-royal-Princess Katherine range of children’s clothing is a beautiful house, walls, barns, pizza oven and fireplaces as well as the half-stone half-glass house, which is the envy of many. 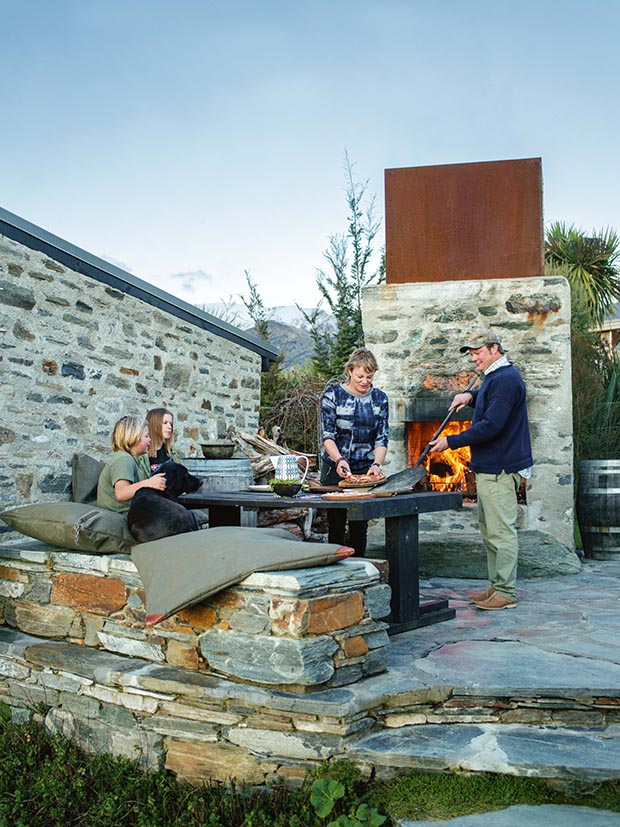 Ros planted the produce gardens close to the pizza oven and kitchen door for easy access to fresh ingredients.

Jimmy’s training, on the historic stone buildings of Shere, has come into its own in the property on a hill above Lake Hawea. “It wasn’t hard to give up the idea of returning home to the UK. Just look at that deal-breaker sitting across the table,” says Jimmy waving his Friday evening bottle of Speights in Ros’ direction. The couple, who got engaged the first night they got together, haven’t quite gotten to the wedding bit yet.

More stories you might like:
How the Big Bang Theory transformed Glenn Jones' art and design business

“He would have stayed in New Zealand even if he hadn’t met me as he was so into the fishing. He’s more Kiwi than most Kiwi boys,” she says. In truth, there is a stack of similarities between his hometown and Queenstown so it never really felt like a huge challenge.

“I moved from one high-profile, very beautiful small town, to another one. Shere is an hour from Westminster in midnight traffic and two hours at any other time of the day. All of a sudden, about 15 years ago, everyone from London looked at our village and rushed there to live, pricing everyone out. It’s full of yuppies and bankers – half of them are Kiwis and South Africans.” 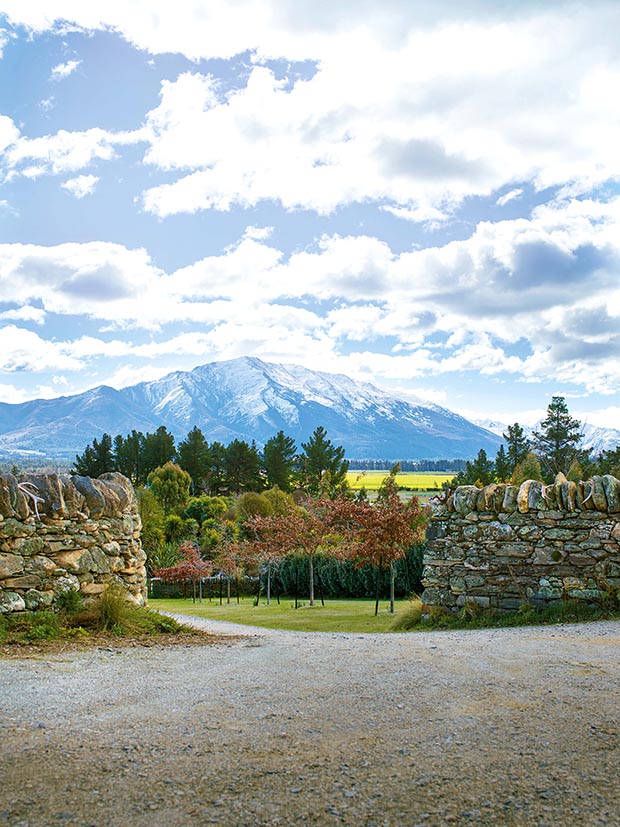 Jimmy got the stones for the property’s dry stack walls from a farmer nearby who was only too pleased to have him clear his paddocks of them. Mt Maude is in the distance.

Thus it was in Queenstown. So they left behind Queenstown’s steeply rising land prices and steeply rising sun-blocking mountains for an elevated, large, sunny (initially broom-covered) section overlooking the McKerrow Range in Lake Hawea – an area warmly known as Hippy Hill. “Sun and land. That’s what we were after and what we got.”

Jimmy’s skills are highly sought after in the ever-more-intricate stone-building climate of the Southern Lakes District. Initially he commuted over the Crown Range daily to work but the boom times have well and truly struck Wanaka, and now most of his work is in his own backyard. He’s thrilled that the tastes of some new home builders now utilize the skills he honed on the listed buildings of Shere. 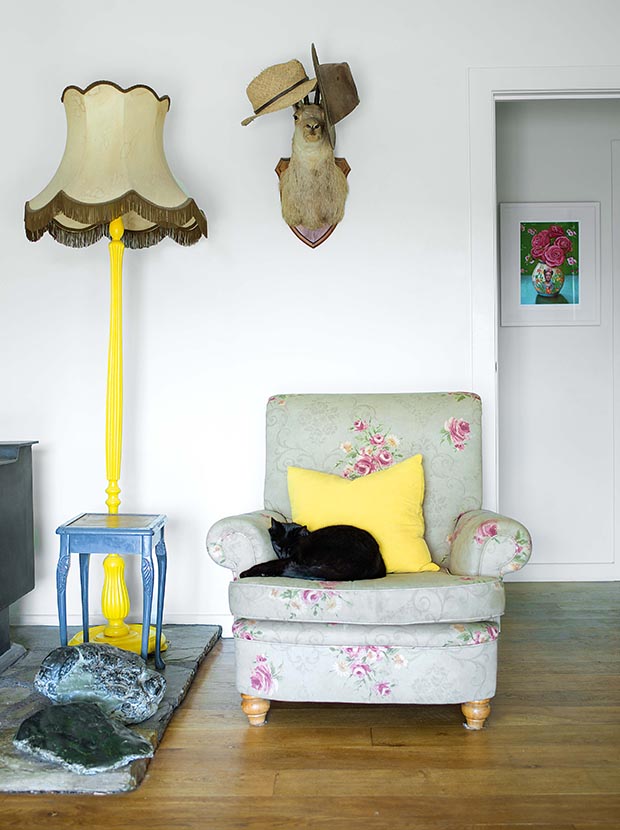 Ros has also stepped into the sunlight with her ever-busy life now including her role as mother to 11-year-old Scarlett and nine-year-old Victor, and mixing the practical life of a nurse with the aesthetic adventures of a clothing designer. When she is not nursing at a local medical centre, she designs and cuts patterns for her Edwardian-inspired range of children’s and adult clothing, which is then sewn by out-workers in Dunedin. 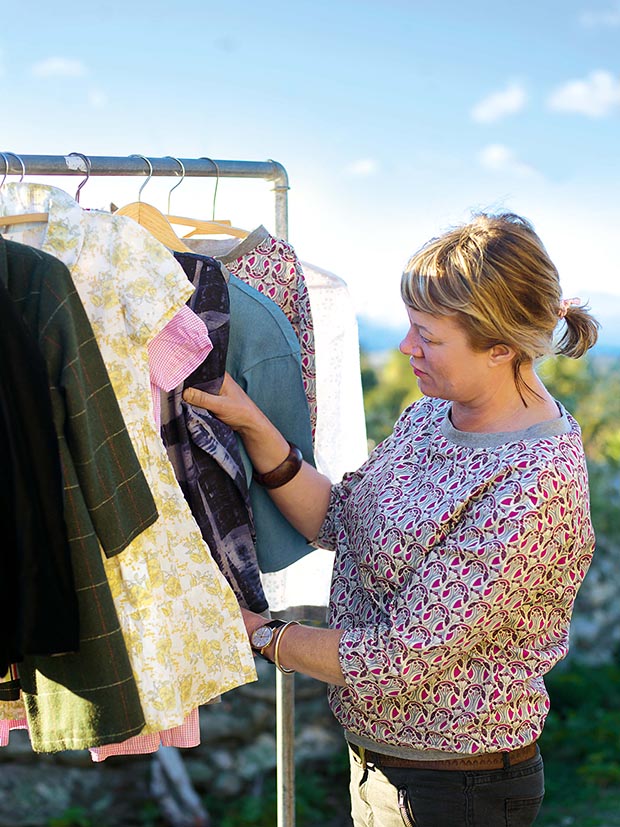 Ros checks over designs for her clothing label, Scarlett & Victor.

And her love of textiles, despite her varied and full life, has never deserted her, so her current big excitement is an about-to-happen trip to Jaipur, India, for a textile printing course. She’s also just launched a range of denim duvet covers, which are going very well. And did she mention her outdoor plant bags and cushions made from decommissioned glamping tents from Minaret Station’s alpine lodges? No, well, they are also gorgeous and going well. “I love the combination of the practical and aesthetic.”

It is a shared love, and it explains why this pair is prolifically productive when it comes to creating, building and growing. Ros’ vegetable beds are practically commercial in size and the number of broad beans she produces is enough to raise a curious glance. “I just give them away,” she says. 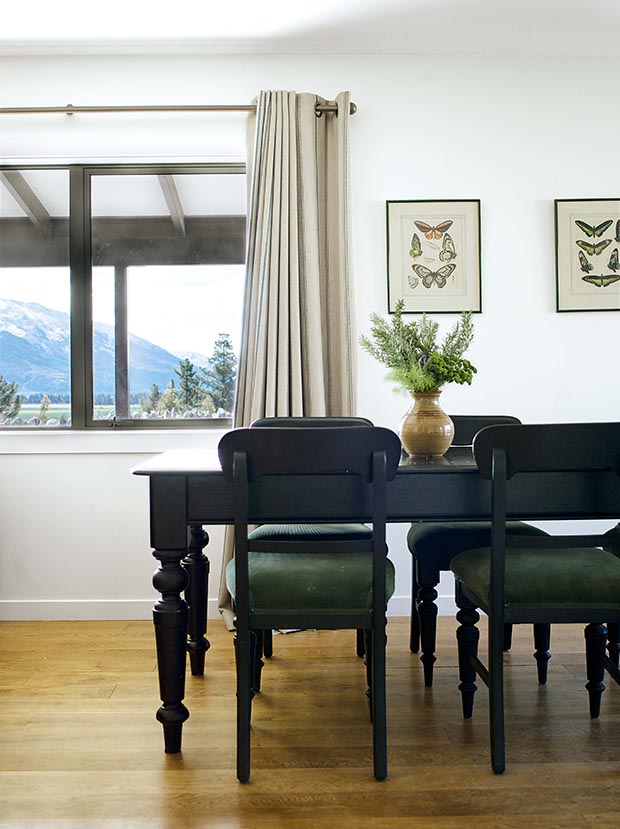 They’re both wired the same way, and often see what can be created with almost the same eye. The stone glasshouse for example. Reads like an oxymoron, doesn’t it? A stone house made of glass. But Ros says when she described it, and Jimmy’s eyes lit up, she knew he could build it. And he did.

FOR THE LOVE OF IT
Jimmy: Why I love working with stone
“It lasts forever, it doesn’t rot, and it makes things look authentic, old and wise – if it’s done properly. And it’s reliable.” thestonemasonsltd.co.nz 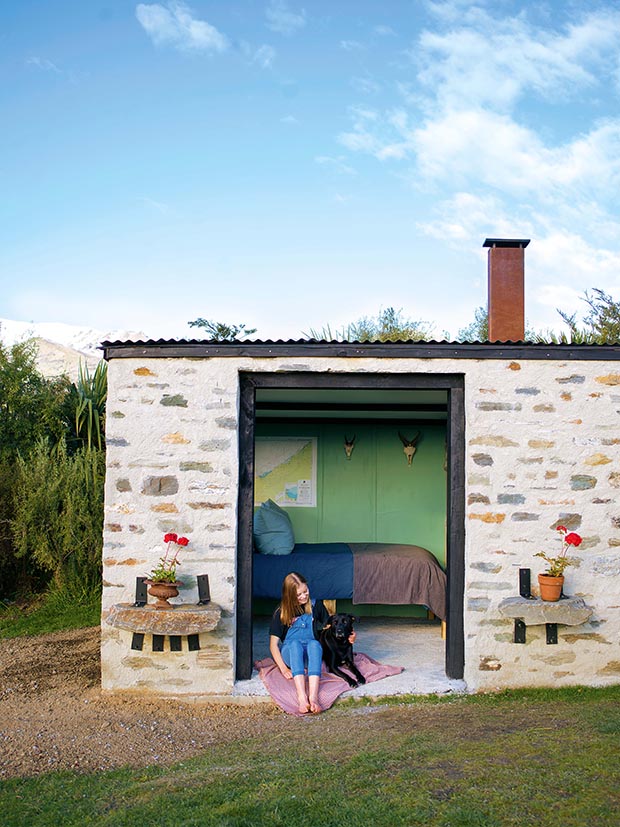 Scarlett with Oscar the dog.

Ros: Why I love working with fabrics
“It’s my form of art. I appreciate beautiful things and enjoy the construction, pattern, colour and texture of fabrics. Often I purchase the material first and then decide what I am going to do with it. Liberty (the London department store) was my favourite shop when I was seven, and it still is.” scarlettandvictor.co.nz