Off-grid living: This Bay of Plenty couple are still finishing their log cabin after 24 years They live off-grid in a log cabin, drive an electric car, and measure their progress in toilets. Meet a pair of earth nerds living their great adventure.

Who: Wendy Montrose and Ross Dredge
What: 174ha, mixed grass and bushland
Where: Manawahe, 40km east of Rotorua
Web: nzearthnerd.wordpress.com

Ross Dredge and Wendy Montrose were deep in the bush, midway between Rotorua and Whakatane, when they came across a waterfall.

They were gathering plants for a native regeneration project. Instead of digging up seedlings to take home, Ross decided to buy the land and build their home in the bush.

“He fell instantly and madly in love with the place,” says Wendy. “I thought he’d lost his mind.”

Once over the shock, Wendy decided it wasn’t such a bad idea after all. In 1995, they sold everything they owned, got jobs, got a mortgage, became the owners of a mixed bush and farmland block, and set off on what they call their big adventure.

Today they live in a beautiful, off-grid log cabin nestled within a native paradise. At the start, they had nothing: no money to build, no power, no running water, no toilet, no phone, no driveway. But they had a plan: build a house within five years and sell off half the property to clear the mortgage. 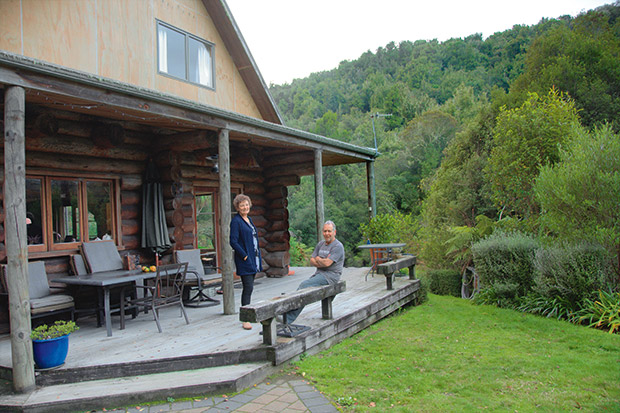 But when they got to the five-year mark, they couldn’t bear to part with any of the land. Twenty-four years later, the house still isn’t finished, but it’s finished enough, says Wendy.

“We still chip away at it, but it’s too comfortable. There’s no pressure to finish.”

They built the log house themselves, painstakingly lifting and fitting each Douglas Fir log perfectly in place.

The house nestles in their valley as though it grew from the native bush that surrounds it. It feels larger than its 63m² footprint. The interior logs glow warm and friendly, even on a cloudy winter’s day. It smells great. But it took a lot of work.

“It was good not knowing what we were in for,” says Wendy. “Otherwise, you wouldn’t start.”

Both worked day jobs in town so their early farming was done by torchlight. Building was weekend work. They lived in two 2m x 1.5m huts lent to them by friends; they were the forerunners of the tiny house movement before it was a movement. Wendy was the log-building assistant.

That meant a lot of time waiting around until Ross needed a hand to lift a log in place or engaging the handbrake on his resurrected crane, which involved throwing posts down in front of the wheels. 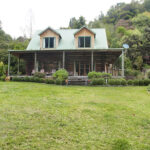 The couple have spent 24 years building their log cabin. 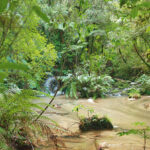 The waterwheel at work. 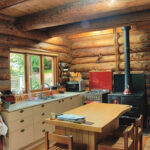 While she waited, Wendy pottered around with free cuttings and seedlings. Over the years, she has taken out what she calls her garden’s ‘fluffy stuff’. Now, the food-producing beds blend in with the surrounding bush. Tomatoes, even in the glasshouse, are impossible to grow due to low light and the cold. It takes a sturdy, rabbit-proof enclosure around the garden to make sure they get vegetables at all in summer.

There’s an orchard of plums, peaches, currants, grapes, pears, and apples. Citrus shivers in the frosts that settle in the low-lying valley between April and December, but a lemon and a mandarin do produce fruit. Six feijoa trees do not.

The one luxury Wendy insisted on from the start was a washing machine. She told Ross she wasn’t going to be washing on rocks in the stream. The original generator ran the washing machine and power tools for the build. Lights ran off a battery; Ross took it to work to recharge each day. Otherwise, they lived without power. 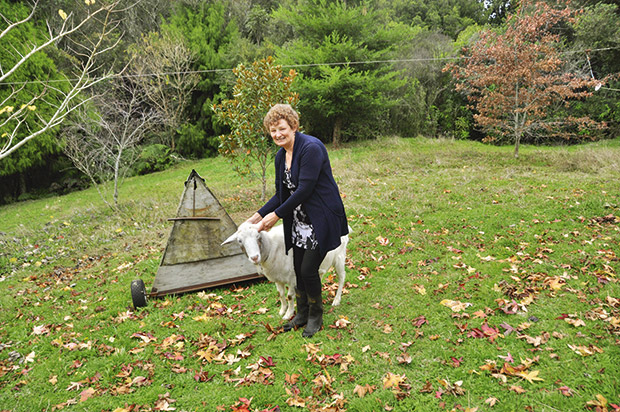 Wendy with Ginny the goat.

Today, the thought of living and raising a baby in these conditions would have most of us – and the local authorities– in conniptions. Pragmatic Ross and Wendy describe it as their adventure, not a hardship. When you build things yourself, there are days you think it’s never going to happen, says Wendy.

More stories you might like:
Māori leader Amokura Panoho led negotiations with the Crown over the 1881 invasion of Parihaka for seven years

“But the day they do, it’s pretty awesome.”

Like August 2006, when they decided the house was finished enough and moved in. Like the day Ross built a waterwheel and Wendy bought herself a bright red toaster. “The toaster is the best thing ever.”

But power isn’t everything. Wendy still prefers her Wagener Fairburn wood stove to the gas oven, is blasé about the microwave, and says the TV is the big reason the house is unfinished.

THE POWER OF WATER

There are two sets of pylons that cross the couple’s land, but connection costs mean hooking into the grid was never a consideration.

Instead, nestled 100m away from the house in a diversion of the Karaponga Stream, is their handcrafted waterwheel. Ross bought himself a copy of The Mother Earth News Handbook of Homemade Power in a second-hand book shop and did everything himself.

Water runs down ducting into the top of the waterwheel.

Waterwheel Mark I was 1.5m high, built from marine plywood. Its 22, 600mm-wide buckets spun in the stream, powering a 24-volt system. It finally disintegrated during a flood after 10 years of service.

Mark II is the same design but constructed from 3mm marine-grade aluminium, powering a more efficient 48-volt system. Its output depends on water flow; it can peak at 1000 watts, then cease altogether if the river level rises above the centre shaft.

Typically, it provides 750-850 watts, 24 hours a day, much more than Ross and Wendy can use. Excess power is dumped into hot water, stored in a battery bank, or used to charge their Nissan Leaf electric vehicle (EV).

The battery bank is comprised of the same batteries as their EV, installed to provide charging capacity for the car. The 49 lithium modules and inverter cost $12,000, roughly a third of the cost of a typical lead-acid battery off-grid storage system. 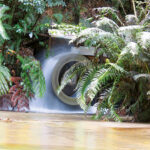 The Mark 2 version of the wheel is built from aluminium. 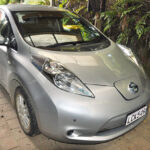 The couple’s Nissan Leaf recharges overnight using the power of the waterwheel.

More stories you might like:
Water cooler: How to fight moths, make a lavender cutting and our review of The Handmaid's Tale

It’s an investment that’s quickly paying off. Wendy calculates they travelled 28,000km in 2018 and saved $3124 in petrol costs. Wendy uses the EV to commute to Kawerau for work two days a week, powering out of their valley up their long, steep driveway, then recharging the batteries on the downhill run to town. It doesn’t work in reverse due to their rugged driveway, so the waterwheel charges the car overnight.

Longer trips to see their daughter in Wellington are broken up by quick-charge coffee stops, or in Taihape for an overnight slow deep charge. Ross might be the qualified mechanic, but it’s Wendy who services the Nissan, filling the washer bottles and checking the tyres. That’s all the maintenance required between the warrant of fitness checks on the chassis and brakes. The Leaf engine has just 22 moving parts, compared to over 2000 in an internal combustion engine.

Wendy says you can measure their progress over the years by the toilets.

“We started with a toilet seat on a beer crate over a hole in the ground – that required an umbrella if it was raining.”

She wouldn’t let us publish a photo of Ross sitting on it.

Ross built a proper long drop toilet, which they used for 14 years.

The first toilet in the house was in the laundry. “That’s the coldest hole in the whole wide world,” says Wendy.

Today, they have a bathroom upstairs, next to the bedroom. “The chimney goes up right next to the toilet seat. It’s fantastic!”

How this New Plymouth couple transformed a steep, wet block with earthworks

Jungle of delicious: Explore the North Waikato lifestyle block bursting with tropical fruit in the middle of dairy country