Jungle of delicious: Explore the North Waikato lifestyle block bursting with tropical fruit in the middle of dairy country 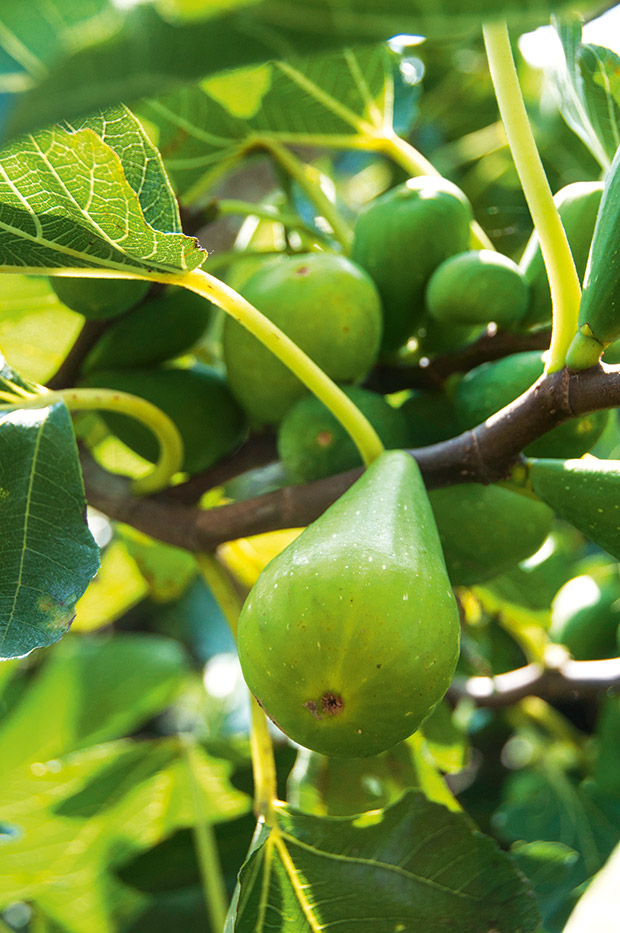 Thirty-three years ago, Hawi and Susann Winter decided to create a jungle of the most delicious kind.

Who: Hawi & Susann Winter
Where: North Waikato, 1 hour south of Auckland
Land: 10ha (25 acres)
What: over 200 fruit and nut varieties

If tree aficionado Hawi Winter could give you one piece of advice, this would be it: don’t plant pine trees.

If Susann Winter could give you one piece of advice? Don’t plant pine trees.

They found out the hard way. They’re still fighting to get rid of the ones they planted, but they love the thousands of other trees covering their block, an hour’s drive south of Auckland.

When they bought the land 33 years ago, it was pasture, completely exposed to the westerly winds, with no trees at all. Today, there’s barely any open space left. There’s row after row of windbreaks, woodlots, macadamias, chestnuts, pip fruit, stone fruit, avocados, cherimoyas, citrus, and a lot of unusual edibles.

“Our philosophy was to develop a natural ecosystem by having as many plants as possible, as many species as possible, in a fashion that they are beneficial to each other,” says Hawi. “There’s safety in biodiversity; never put all your eggs in one basket.” The couple, originally from Germany, wasn’t used to the climate of the hilly, westerly North Waikato. With no internet to help them back in the late 1980s, they researched, questioned locals, and relied on trial and error.

When they first began planting, their block received winter temperatures as low as -7°C. Today, the sheer number of trees has elevated the microclimate to an almost frost-free environment. Hawi describes it as a sheltered, tropical-looking plantation. Not so much a ‘food forest,’ he muses, as an organic, organised food jungle. It’s also home to incredible biodiversity, full of bugs, birds, fish, and a special army that happily helps out in the understorey.

“Chickens are our workers,” says Hawi. “They prevent explosions of pest and bugs, in particular green vegetable bugs in the macadamias. We don’t have those; we have a volunteer army and too many eggs.” 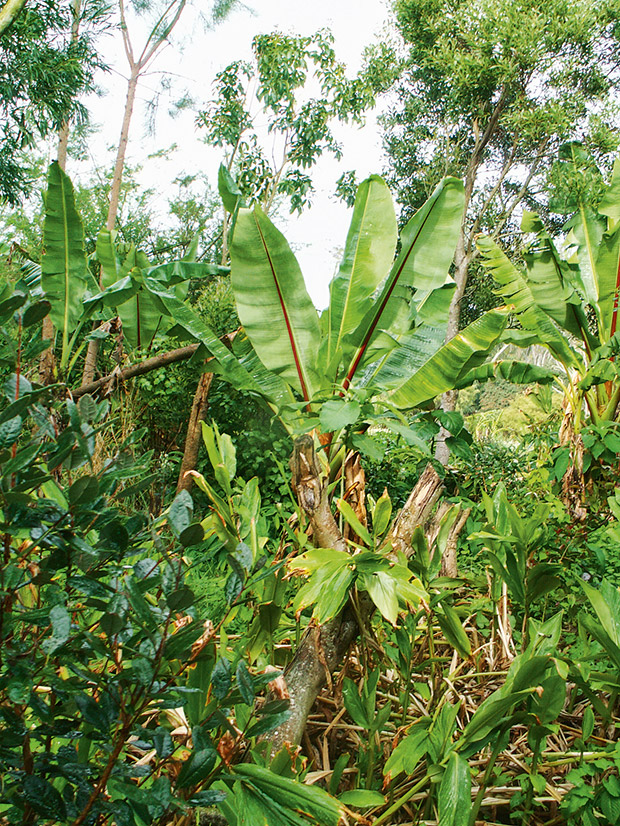 Their jungle produces enough food for everyone in the family, with lots leftover to give away to friends and to sell. Now their jungle is relatively mature, Hawi and Susann’s main tasks are: 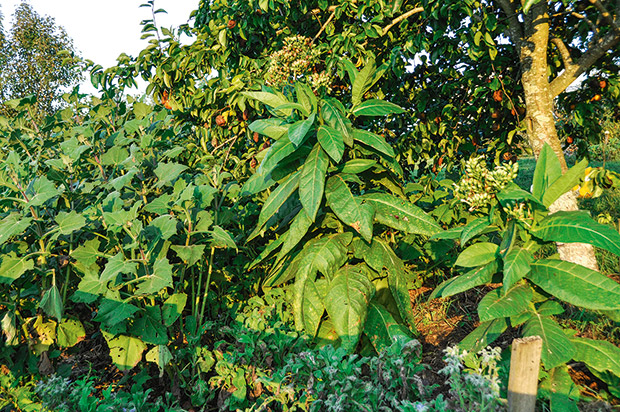 Then there’s the hardest task, developing their marketing skills so they can sell their crops. They battle daily with introduced weeds such as banana passionfruit, privet, woolly nightshade, Japanese honeysuckle, and jasmine. Controlling pests such as rats, possums, and rabbits, is ongoing, but the couple is always happy to share their fruit with the local kererū.

Their planting regime isn’t the key to wealth, says Hawi, but it is the key to satisfaction. 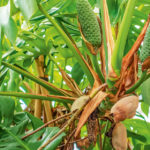 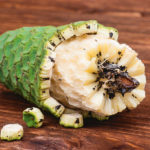 More commonly thought of as a house plant, the architectural Monstera deliciosa (also known as fruit salad plant) thrives in the understory of Hawi’s jungle. The fruit tastes horrendous as it grows – it’s so high in oxalic acid, rats and possums ignore it. But the bitterness dissipates as it ripens over a year. While it requires patience and care to get a crop to harvest, the delicious flesh is worth it; the Latin name ‘deliciosa’ refers to the taste of the fully ripe fruit, a mix of banana and pineapple.

Hawi’s tip: only eat fruit where the exterior scales have fallen off. 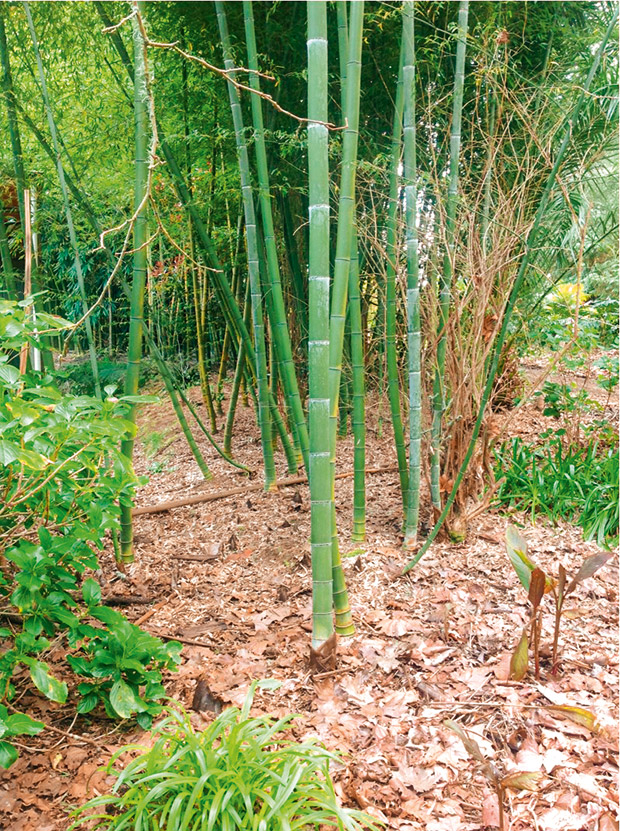 Moso bamboo shoots are a delicacy.

This is quick-growing once established. As in super quick – more than 30cm per day at its fastest. Phyllostachys edulis is an attractive and edible windbreak for a food forest.

Terrifyingly, it’s also one of the ‘spreading’ bamboos, and we’ve all heard horror stories about what they can do. However, it’s relatively slow to spread. If you harvest the new shoots during their growing season (six weeks in early spring), it can be kept in check. Susann cooked it in a tasty risotto for lunch. It’s firm, slightly crunchy, with a mild, unique flavour.

All fuchsias are edible (both berries and flowers), but some taste better than others. Hawi’s fuchsia grows multi-stemmed to about 2m. Each stem bends over due to clusters of berries, which are tipped with a stunning red flower. The 2-3cm oblong berries progressively ripen to a dark purple colour. Their flesh is soft, delicious, with a hint of ripe fig, and contains small seeds. Hawi says his one is probably Fuchsia corymbiflora, commonly known as the Peruvian berry bush, a deciduous, frost-tender shrub.

Mark Twain called the cherimoya (Annona cherimola) “the most delicious fruit known to men”, and Hawi agrees, rating it as his favourite. The soft, fist-sized fruit is reminiscent of ice-cream in both flavour and texture. It’s rarely available to buy as it’s too easily damaged during processing and transport. 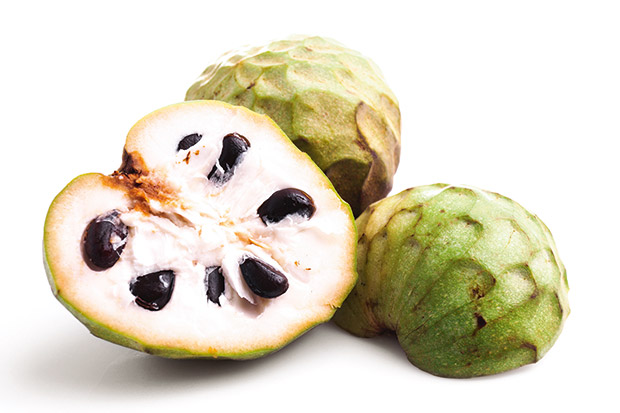 The tree is easy-care, dense, and fast-growing, reaching about 5m. It thrives in the Winter’s frost-free climate and produces masses of fruit from late winter to early spring.

Figs are another of his recommendations for a food forest. They’re an easy-care tree, and you get good crops if you harvest early in the morning and beat the birds. Hawi has seven different varieties that spread the fruiting season over a long period. Figs can sucker and create a thicket, so you need to prune them back if you don’t have a lot of space. The advantage is that you can give away the trimmings which strike easily. If you love bananas, Hawi and Susann’s trees will make your mouth water. They have more than 10 different types, some named varieties,  others from fellow enthusiasts, such as Waiuku Choice. Hawi considers them an essential part of their food jungle, providing regular, ample bunches of small tasty fruit for little effort.

The red pineapple (Annanas bracteatus) is slightly more cold-hardy than the tropical yellow variety sold in supermarkets. It grows and produces best in full sun, but Hawi also has them growing successfully in the understorey of his jungle. The waist-high spiky bromeliads send up a flower stalk that develops into a pineapple. It’s pretty to look at and very tasty when ripe. Unfortunately, the fruit Hawi had been waiting to ripen was eaten before he could harvest it, possibly by possums or rats.

Plums are the reliable mainstay of any orchard and do well in temperate or subtropical food forests. They’re so easy-care and prolific they tend to be disregarded by a lot of gardeners. But there’s a wide variety of flavours to suit every taste, from delicate greengages to the intense damson. Hawi believes that plums – particularly freestone varieties – should be included in every food forest. If you can’t eat them, you can follow his example and turn them into very drinkable wine.

Apples might seem boring, but home-grown ones vary so much in taste and flavour and are quite different from the limited varieties you can buy in supermarkets. Hawi rates them as the most productive fruit of everything he grows.

Hawi’s tips:
• Choose the rootstock suitable for your soil and climate, so they naturally thrive.
• Plant a selection that extends the season; he has early apple varieties which start fruiting in January, right through to late ones such as Granny Smith, still hanging on the tree at the end of autumn. 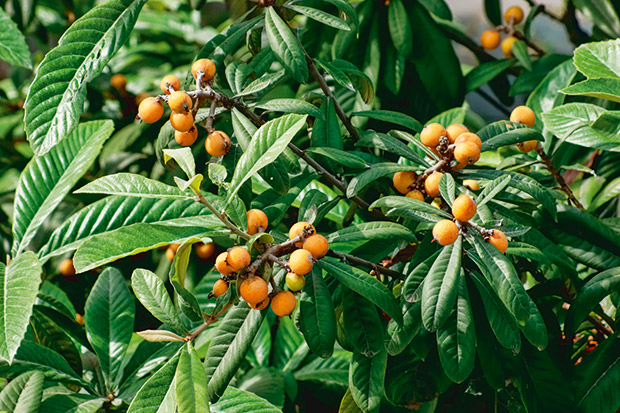 This is a cold-hardy, tropical-looking tree, with green, thick leaves all year round. It’s easy-care and worth including in a food forest for its looks alone. The bonus is the delicate yellow fruit, which ripens in early December. The only problem says Hawi ruefully, is too many are usually consumed by the other animals that inhabit their block (birds, possums, rats).

This rampant self-seeder is considered a weed by some, but Physalis peruviana is also a no-maintenance option in a food forest’s herbal layer. It’s a member of the tomato family, so grows as an annual in colder climates, but if your place is frost-free, it will survive for several seasons. 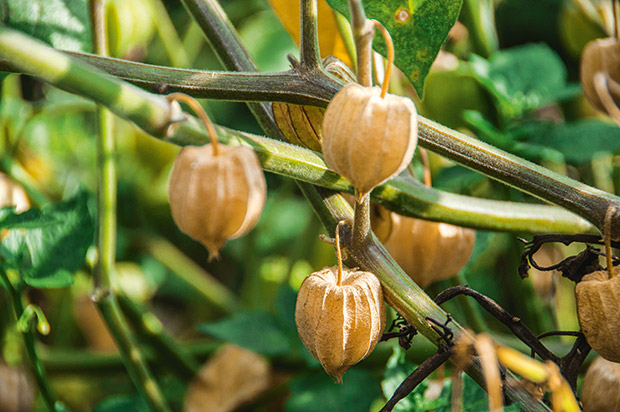 It produces prolific amounts of small, Chinese lantern-like husks that turn from green to a transparent brown. Inside is a tasty golden berry full of tiny seeds, similar to a tomato. Birds love them and spread the seeds which pop up everywhere. They seem to do exceptionally well if beside or under canopy trees.

Guavas are tropical looking but frost hardy, and notoriously easy care (feijoas are a type of guava). Hawi rates the yellow cherry guava as his favourite. He has a selection of different varieties from an old growing trial that were imported from South America. He says some are more attractive to a herd of roaming wild goats than others and have been chewed off several times. There’s a wide variation in the size, shape, and flavour of the fruit. Guavas grow into woody shrubs or small trees and produce prolific amounts of cherry-sized fruit.

The easiest way to harvest ripe guava: lay weed mat or a sheet of canvas around the base of the plant, then shake the bush. 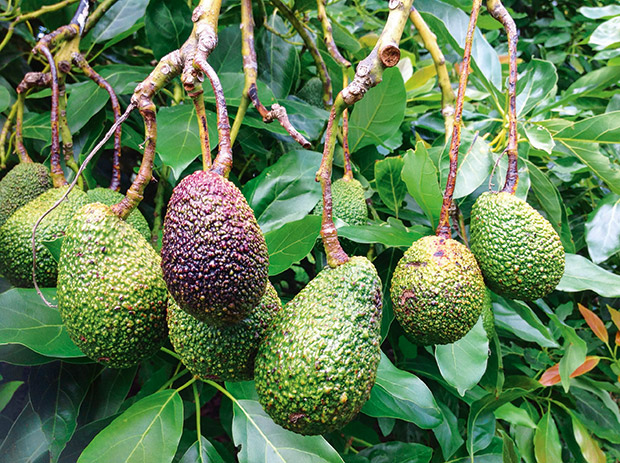 One of Hawi’s trees ripens in mid-winter.

These are easy to grow from seed. Place the stone in a glass of water and sit it on a windowsill, or plant it in a compost pile.  Hawi has several named, grafted varieties and produces enough avocados to sell. He also has some that haven’t produced anything in 20 years. However, there is one that has a thin skin and looks like a smaller version of the Hass variety. It ripens very early (in the middle of winter) and has such striking, new, red foliage that Hawi says it’s worth growing for its beauty alone. • 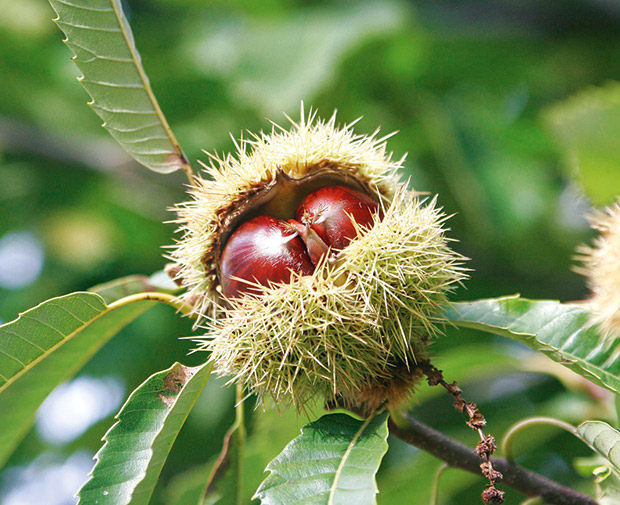 Hawi and Susann are amazing gardeners, but even their green thumbs couldn’t overcome issues with these trees:

• stone fruit, as most fruit succumbed to brown rot;
• sweet chestnuts, due to poor quality of nut flavour, processing properties, and shelf-life;
• pine nuts, which require specialty machinery to harvest and process;
• pecan nuts and cherries, which don’t produce enough in their climate.

• always plan 50 years ahead.
• you can’t expect to be in equilibrium with nature when you first start.
• debris should be left in place to be decomposed by saprophytic organisms (ie, fungi).
• the most important thing is to have ultra-reliable tools, particularly when you have to drive a distance for repairs.

If he had his time over, there’s one group of trees Hawi wouldn’t plant.

“Don’t plant woodlots – I wouldn’t do so again. There’s so much timber (for firewood) coming from other trees like windbreaks.”