From motherhood in Taranaki to entertaining festival crowds: The dual life of singer-songwriter Victoria Girling-Butcher (aka VGB) 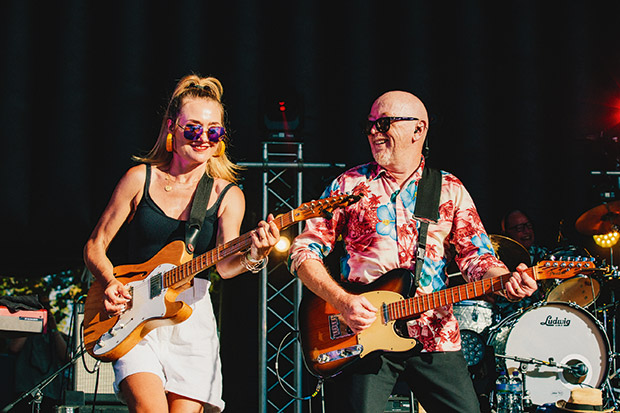 This Taranaki singer-songwriter writes her own rules for thriving in Aotearoa’s competitive music scene.

In the nineties, two female musicians asked a bank for a car loan ahead of their South Island band tour. Despite their profit projections, the bank manager shook his head. “If you were a rugby club, the answer would be yes,” he told them.

One of those women happened to be Victoria Girling-Butcher, a Taranaki-bred singer-songwriter (also known as VGB) who would go on to release four albums and perform in some of the nation’s largest stadiums. Suppose that bank manager had known she would someday coo summer ballads to thousands of festival-goers, sharing the stage with musical legend Sir Dave Dobbyn. What would he have said then?

“New Zealand isn’t always a place that values the arts, compared with somewhere like France where it’s so valued,” says Victoria. “Here, we value practical, tangible things such as a good rugby game.”

But not even a bank rejection could stop 19-year-old Victoria and bandmate Felicity Millar from touring the south. They borrowed a rumpty van and prayed to the live-music gods for a safe voyage. That’s Victoria for you — never letting inconveniences get in the way of her music. 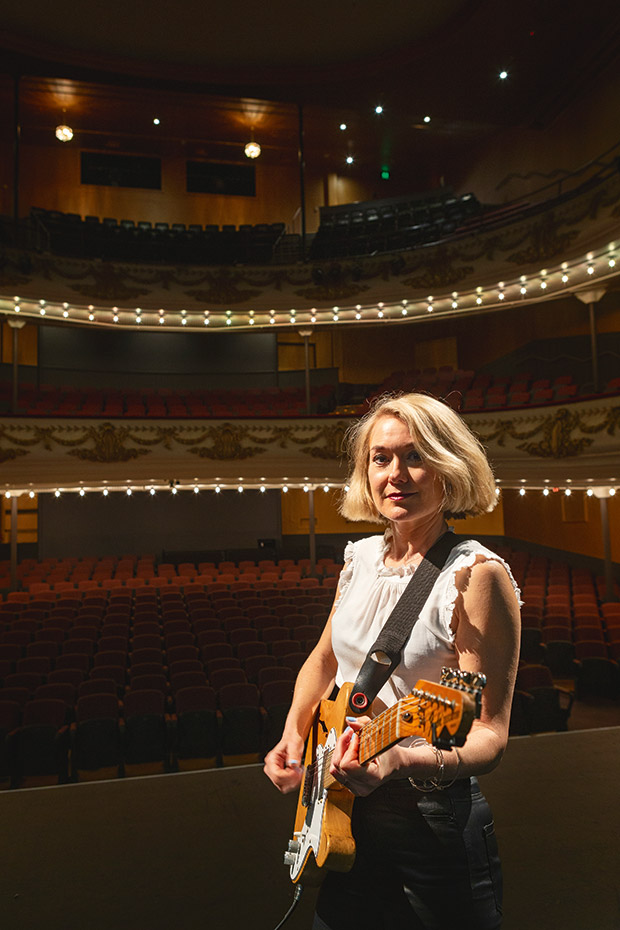 At age seven, Victoria Girling-Butcher sang for the first time on stage at the New Plymouth Opera House as Gretl von Trapp in The Sound of Music. The theatre (renamed the TSB Showplace) that stands today was designed by her great-grandfather (and prominent local architect) Thomas Herbert Bates back in the 1920s after a fire destroyed the original building in 1916.

Today, on a quiet street in New Plymouth, Victoria fills the dishwasher and folds her seven-year-old daughter Camille’s clothes. The daily tempo is a beat slower than this summer past when she and Dobbyn’s band played for some 50,000 people at Auckland’s Eden Park as part of a star-studded extravaganza headlined by Six60.

More stories you might like:
No matter this 1962 Austin A40 Farina is rife with quirks — its owner loves it all the same

Since striking up a friendship with Dobbyn through their mutual manager in 2008, Victoria has toured with his band, on and off, as a back-up vocalist and guitarist. “Dave’s songs resonate with New Zealanders in a particular way, and it never seems to tire. When you’re playing for these big crowds, they are fully with you. You sort of feel invincible after shows where you are performing for thousands and thousands of people.” 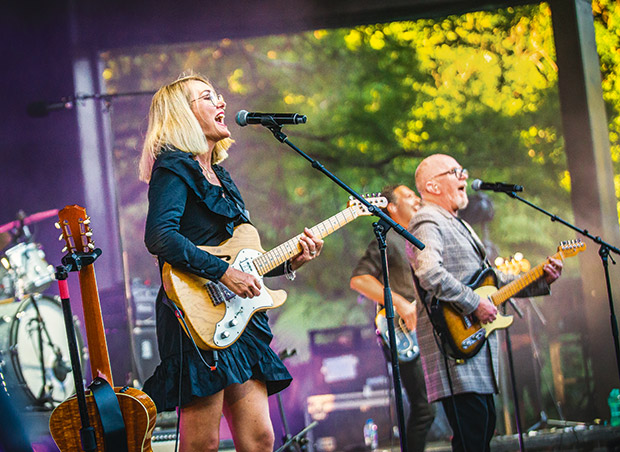 Victoria has played with Sir Dave Dobbyn’s band at various stadiums and venues around the country, including Western Springs, Rhythm & Vines’ Waiohika Estate vineyard, and her hometown’s TSB Bowl of Brooklands. Her wedding at Ahu Ahu Villas in Ōakura was one performance she’ll never forget. When she and Gregori married in 2012, Dobbyn sang her down the aisle with his 1999 single Beside You — her favourite of all his songs. (Photo: Jenny Feaver/ muzic.net.nz)

In the off-season, motherhood and songwriting take centre stage. When Victoria’s not recording in Auckland or at her local studio, she spends her days playing music and dreaming up new lyrics until it’s time to pick up her daughter from school. She has written and half-written “possibly hundreds” of songs in preparation for her second solo album, which will be released by the end of the year under her moniker, VGB.

Like most creatively inclined souls, musicians often find themselves wading through self-doubt, even when on the brink of their finest work. Victoria is no exception and relies on a tight-knit circle of musicians and producers to help her decide which songs are album-worthy. “Unless I have someone else hearing what I’m hearing, I’ll throw it all away. I think it’s normal though, especially as a singer,” she says.

There was never any doubt Victoria would make music her métier. Like many creatives of her ilk, school and exams didn’t come easy as a child. Music was her refuge; by age 13, she could play the piano and had a head full of original lyrics. Years later, she was diagnosed with dyslexia. “I always felt a little bit on the outside of things. But I think that’s a good thing as a songwriter. You end up getting quite good at looking at things from a different perspective,” she says.

Maybe she was destined to go about life slightly differently — at least creatively. Her mother Ali was a painter, and her grandmother a piano teacher. Her father Lance was editor of the Taranaki Herald and Taranaki Daily News and has gone down in history for his editorial decision to call their local mountain Taranaki instead of Egmont.

Victoria moved to Auckland to “get serious” after a few starving-artist years in the South Island (studying music in Nelson and hitchhiking to venues with her guitar). When she met future bandmates Marcus Lawson and Derek Metivie at an Auckland party, they clicked. In 1999, they formed an indie band called Lucid 3, with Victoria as frontwoman. 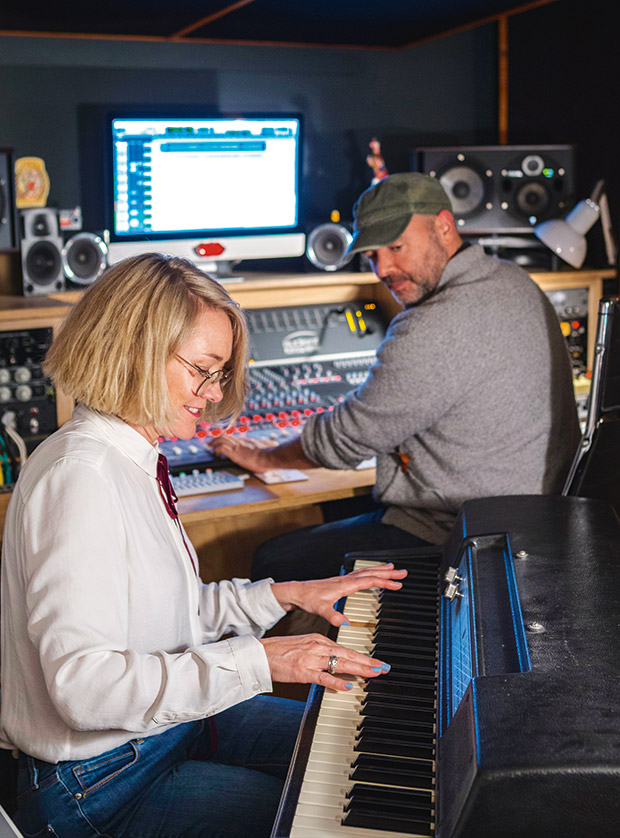 In her 15-year stint with the band, Victoria wrote three albums’ worth of songs, including the folksy-bluesy hit, AM Radio. Inspired by her father, she also carved another niche — journalism — with a part-time job in documentary research and an interlude to study the craft at the Western Institute of Technology. “Ever since I started songwriting, it was always to communicate my angle on authentic human experiences. I love to tell stories in any form. That’s also what drew me to journalism — my curiosity about people and how they see the world.”

In her 30s, Victoria was having a ball of a time. Professionally, she was juggling Lucid 3, prepping for a solo album, and performing with Sir Dave’s band. She had also met a French-Japanese chap named Gregori Matsunuma while camping at Ōakura Beach. Everything was looking spectacular until her debut album Summit Drive dropped in 2011. Her physical health called for a sudden intermission. 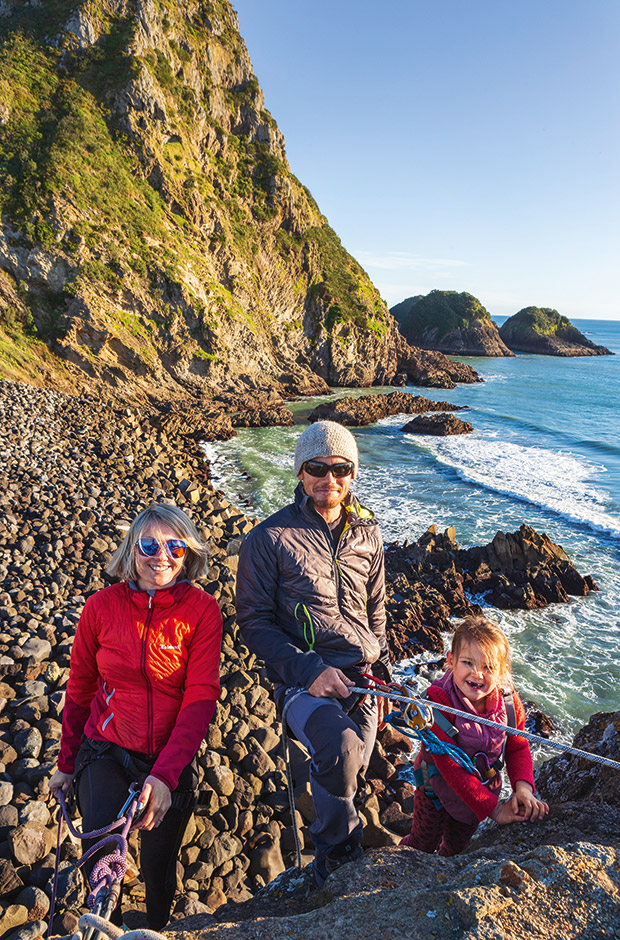 In 2011, Taranaki’s internationally renowned “Surf Highway 45” brought Gregori Matsunuma to this corner of the world — he met Victoria on a beach south of New Plymouth. Immigrating from France to Aotearoa has suited his outdoor-driven lifestyle — an abseiler by trade and mountain climber, surfer and snowboarder by weekend. It’s not uncommon for him to take Victoria and seven-year-old Camille on adventures, such as rock climbing near Paritutu Rock (pictured). “He spends his life hanging on a rope and loves being outside. If he had to sit at a desk all day, he’d probably end up going mad,” says Victoria.

She was diagnosed with early onset of Sjögren’s Syndrome, an autoimmune disorder that demanded a 180-degree lifestyle change. Stress-exacerbated symptoms such as fatigue were not exactly a great match for show biz. So she and (now husband) Gregori moved away from Auckland, first to New Plymouth, then a smidgeon further — to Paris.

France was supposed to be a sabbatical of sorts, but music tends to latch onto Victoria wherever she goes. She was hired by the owners of a bilingual rock school popular with children of the rich and famous; never will she forget the day Jarvis Cocker (frontman of English band Pulp) observed her teaching lyrics to his son’s class.

“I was thinking ‘Surely, he’d like to contribute since he’s one of Britain’s most famous lyricists?’ He didn’t say a word.”

Paris was enchanting and exhilarating, but Taranaki’s backcountry charm and magical maunga force has a way of luring people back home. Sure enough, when Victoria became pregnant with Camille (pronounced Cah-mee) in their second year in France, she and Gregori only envisioned Taranaki for their future. Victoria with daughter Camille. Gregori regularly speaks French to Camille, who understands and mostly replies in English. “Multinational families tend to make a culture of their own,” says Victoria.

Seven years later, Victoria is hitting the right chord in both life and music. Daily beach walks and regular Pilates keep her symptoms subdued, which means summer concerts and lengthy recording sessions in Auckland are doctor approved. While living in a rural corner of the country may seem a roundabout way to go about a career that demands an audience, history shows this Taranaki troubadour never shies from a challenge.

“As long as I’m maintaining personal satisfaction of expression with my music, then I’m achieving. As with anything creative, why do we do it?”

Who: Victoria Girling-Butcher’s stage name, VGB, has been a long time coming. “My name is ridiculous. It’s far too long,” she says.
What: Her second solo album is an alt-pop-ish medley of Victoria’s talents — lyrics, vocals, piano and acoustic guitar. But she won’t take all the credit. “After a full day of voice recordings, I go into a catatonic state of ‘that’s just too much me’. Other people breathe another perspective into it.”
When: VGB’s single The Giver and The Gift was released last year as a prelude to the album release. She expects the album to be released by the end of 2022, pandemic permitting.
Find: Search ‘VGB’ on Spotify or YouTube. facebook.com/victoriagirlingbutchermusic