The child of two cultures, Lyzadie Renault found that where she was born is not actually where she belongs. The journey to find her true place, however, has been unexpected.

The young Lyzadie Renault padded to her bed over an earthen floor worn soft as velvet by generations of bare feet. As she waited for sleep, she picked idly at the rammed earth wall, pulling out the bits of straw and small branches to which the mud bonded.

At some level, she was intrigued by the concept, although she was too young to realize it.

She was also too inexperienced to comprehend that, in the matrix of identity, she was a bit like those strands she pulled from the wall. While both sets of grandparents eyed each other across a suspicious cultural divide, Lyzadie and her brother and sister, Natacha and Cedric, were the little neither-one-nor-the-other treasured petits-enfants, the grandchildren that held it all together. They were the aggregate that kept the family from falling down because it was an unusual union, the boy from France and the girl from the village in the New Caledonian countryside. But grandchildren are master-ambushers of unsuspecting hearts so, despite themselves, despite their fears and prejudices, the respective in-laws rallied for love.

Lyzadie’s father, Serge, left Normandy at 22, running from the legacy of one war and the reality of another. He was an artist and adventurer at heart, although his parents thought he ought to be more serious, so he studied accounting. He washed up in New Caledonia and fell in love with 21-year-old Celine, who must also have had a courageous spirit because she all too happily stepped out of society’s norm to marry this man. Lyzadie and Michael and their children Ashe, Jaden, Coco and Océane.

In New Caledonia during her school holidays, Lyzadie and her cousins played a favourite game in the coffee plantations, pulling down the vines that hung like serpents from the trees and laying them out in a floor plan that depicted a wee house. Even then, she was eyeing up and understanding space. She became very connected to the outdoors and felt the pulse of the earth beneath her bare feet.

In France, in the cities where there was a decided lack of grass, and that which did grow often sprouted signs exhorting that it should not be walked on, Lyzadie was overwhelmed and overshadowed by buildings without any rammed earth in sight. No bits of stick or straw to extract here; the only “aggregate” to be idly picked at were brave bits of lichen clinging to the stone and brickwork and the detritus of rogue winds. 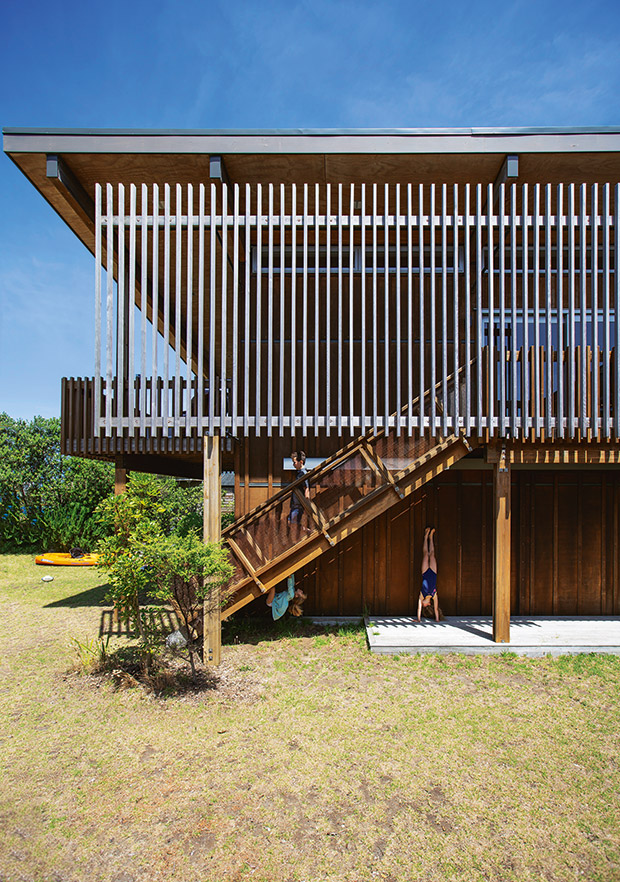 But the cities were elegant and sophisticated and their quintessential French-ness, that indefinable bravura the French can’t quash, drew her to them. The older buildings, in particular, were constructed from the natural and raw materials that Lyzadie once inherently – and now also consciously – loves, her childhood instincts no doubt influenced by her patriarchal line of furniture-makers, engineers and builders.

When she was 14, her parents packed up the family and moved to New Zealand, a country they had visited and with which they had fallen in love. (The previous year, Lyzadie had also taken part in a student-exchange programme here.) Aotearoa fitted her like a glove. For the first time in her life, she felt she belonged, although perhaps before then she hadn’t realized she had been so adrift. 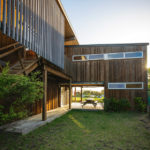 Lyzadie chose cedar for the exterior because it requires no maintenance apart from oiling. 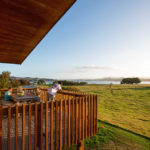 The build took eight months and many seven-hour round trips for Lyzadie, who managed the process from Auckland. 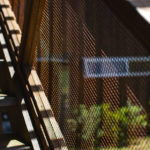 It was an ordeal but still she endured it for her love of architecture, designing and finding solutions.

It wasn’t easy – the bi-lingual Lyzadie became the chief of her little tribe. Her parents’ English skills were limited and, in a way, Lyzadie became the family caregiver. It was a big ask and a big task, but she was up for it. In New Zealand she could do what she wanted; there were no traditional restraints in being a woman.

She had never considered herself a feminist, but she did expect equality and resented the view that, in French society, there were more gender-specific roles. 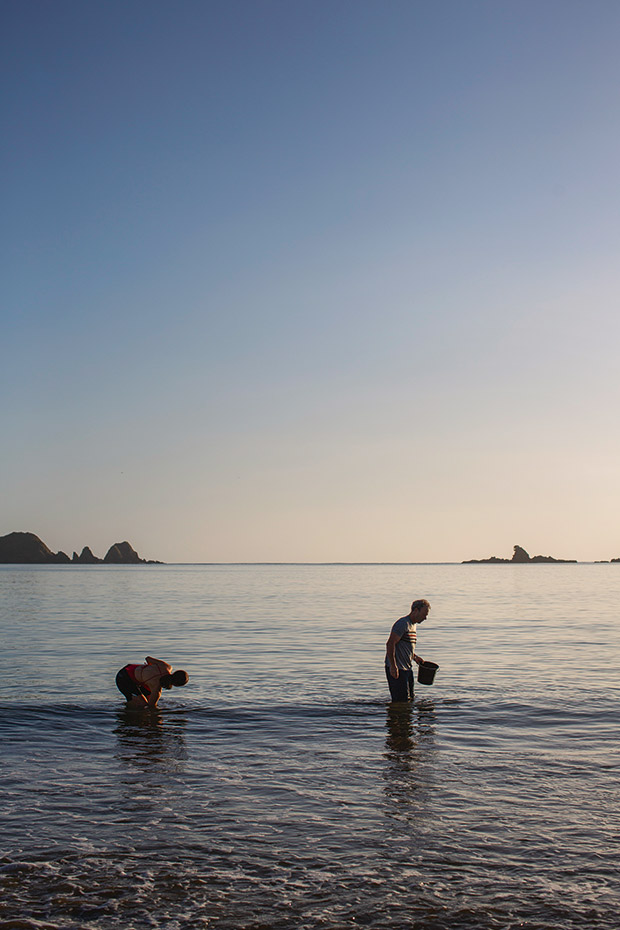 When she wasn’t playing advocate for her family, she threw herself into sport and the great outdoors. She left her footprints on West Coast beaches and, just as they quivered and blurred and were absorbed back into the wet sand, back into the land, so was she. It was hard to explain; it still is.

She found herself inexorably welded heart and soul into the natural world of Aotearoa and has never had the slightest urge to extricate herself. 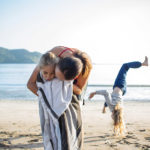 Why not photobomb your sister’s fit of pique with an impressive flip on the sand? 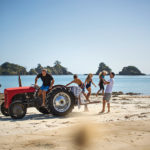 What would a bach be if you didn’t have a tractor? 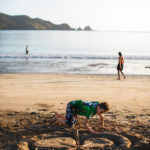 What is a beach without a magnificent sand creation the tide will sweep away, or your siblings will destroy, just because they can?

Of course, after university (languages, literature and architecture for Lyzadie and law for her now-husband Michael Pollard), she did the almost pre-requisite big OE; she had become Kiwi enough to be expected to take that opportunity.

Not surprisingly, architecture had become her prime interest, so much so that she worked extremely hard to land herself a place at the Architectural Association (AA) in London, the oldest architectural school in Britain, and she and Michael headed for the British capital. The AA was the alma mater of visionary architects such as Rem Koolhaas, Steven Holl and Amanda Levete and the now late, great, Zaha Hadid.

More stories you might like:
Home delivery drinks business the Cocktail Collective is shaking up the party

Lyzadie’s experience at the school almost deconstructed architecture in the way she knew it. Sure the tide leaves the same pool behind every day, but who knows what might lurk in it this time?

It was challenging and pushed her. She loved it and learned a lot. But there were personal decisions to be made, not least whether Michael, who had been offered a promotion at work, would commit to a few more years in London or if they should come home to start a family.

Although Lyzadie had felt she was a bit over the caregiving role, having spent her teenage years at that serious task and wasn’t rushing to have children, there was the expectation of les enfants at some stage. 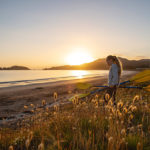 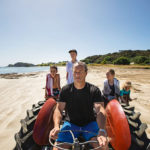 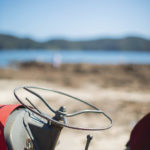 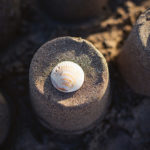 They did return to New Zealand and four children later – Ashe, Jaden, Aveia-known-as-Coco and Océane – Lyzadie not only learned a lot about herself but also reignited her interest in space because children take up so much of it, in energy if nothing else. She was also more forcibly reminded – if she had indeed forgotten – that the planet could very well be in dire straits and if she wanted her children to have a future, she needed to act.

Although after six years of living in London she had come to love it, the city was one that was in danger of drowning in its own glee. It was hurtling forward so fast it could barely keep up with itself. It was an unhealthy juggernaut, and if it had ever practised a sustainable and circular economy, it was long gone, although some were belatedly trying. 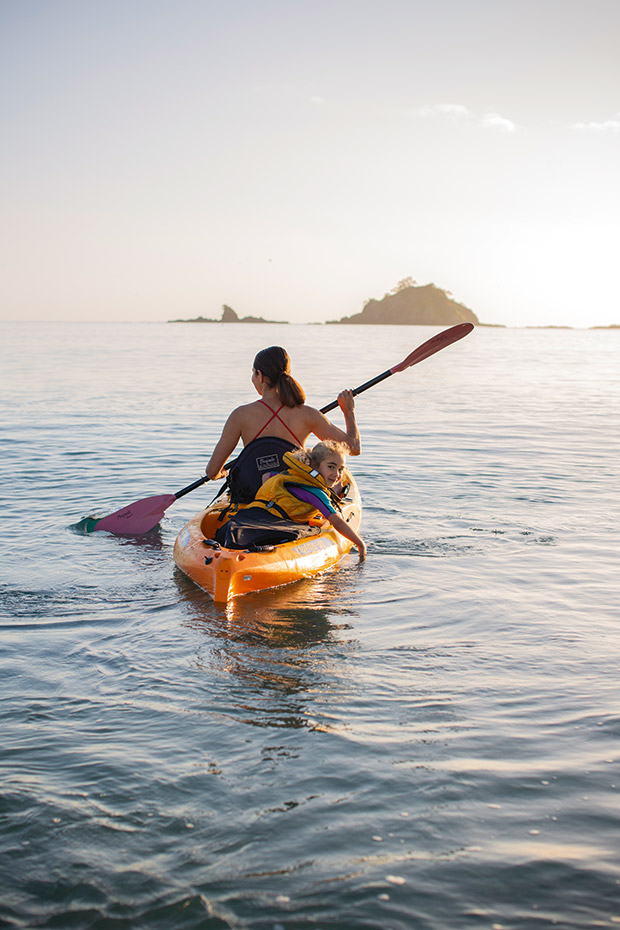 How come the school run is chaotic, but you’ll fall over backwards to be the one behind mum in a kayak?

Her own view of sustainability was instilled in her by her parents and reinforced by her years of living in New Zealand, a country that hadn’t been almost hammered into environmental hopelessness. In New Zealand, Lyzadie thought, doing something good for the planet and local communities was still both possible and realistic.

In 2018 she set up LyZadie Design Studio, founded on her abiding love for Aotearoa. Here she designs and collaborates with those of like minds to do something good for the environment and its people, to furnish spaces in what she hopes will become recognizable as New Zealand furniture, in the way that Nordic or Italian pieces, for example, are instantly discernible. 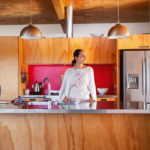 The interior is made from pine, which is sustainable and offers the type of finish that makes “it feel like a bach”. 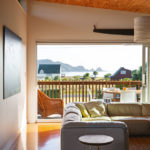 The floor is structural plywood; usually, this would have a finish on it but Lyzadie decided to leave it because she likes being surrounded by “honest”, raw, natural materials. 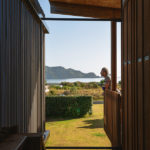 Bland Bay is not the least bit bland; it is beautiful. Just a narrow strip of land separates it from Whangaruru Harbour.

She engages local craftspeople who use sustainable or rescued materials such as rescued river rimu or mātai. Aotearoa’s natural kingdom inspires her collections, and each is aligned to a charity that benefits from a sale.

Her Flow collection, inspired by the braided rivers of the South Island, aids NZ Forest & Bird; White Cloud, inspired by Aotearoa, feeds children; Black Tree Fern supports Starship Hospital; and Re-LEATHERED, fueled by telling the stories of New Zealanders, helps the homeless. Tūī, too, will soon find a worthy cause to support. The studio also donates to Trees That Count to offset its carbon footprint. 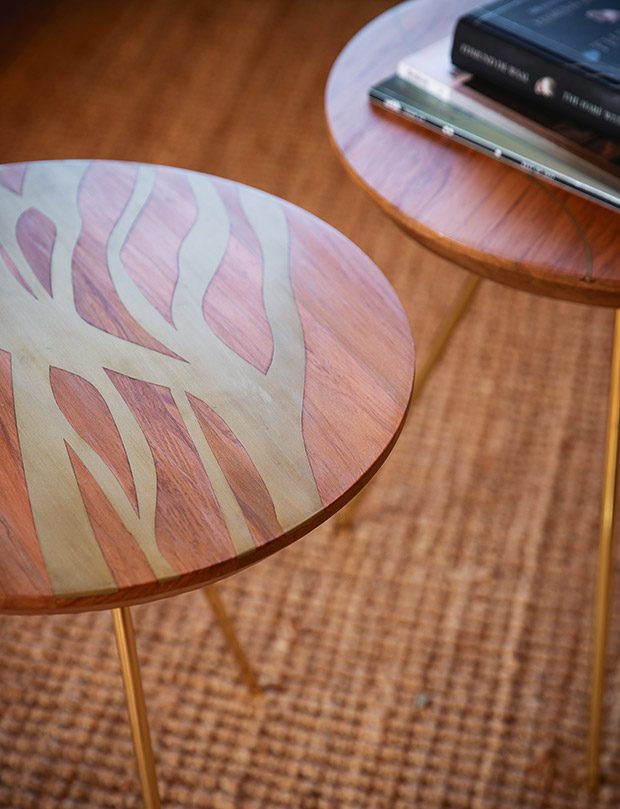 The brass motif flows across the rescued-rimu surface of a table from Lyzadie’s Flow series, which was inspired by the braided rivers of the South Island.

In 18 short months, Lyzadie has made her mark. Her first collection, six months after it was launched, was a finalist in New Zealand’s Best Design Awards. She was invited to exhibit at Milan Design Week 2019 and was named a designer to watch. She has shown at 3daysofdesign in Copenhagen and is now represented by European sustainable-luxury network, 1.618 Paris, and procurement agency, Dodds & Shute.

In design and in Aotearoa, Lyzadie has not only found a purpose but, most importantly, she has found herself; her heart and soul are now intrinsically bound to this sliver of a cloud-draped country. 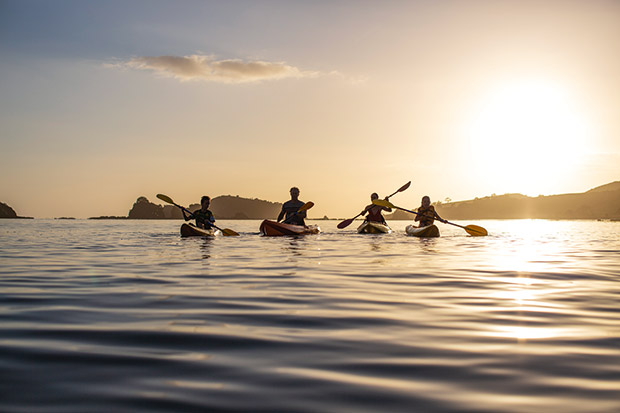 In all the best movies, they sail off into the sunset; why shouldn’t famille Renault et Pollard?

These outdoor pursuits help her connect with who she is. She also trained in karate for more than 10 years and became New Zealand karate champion under 60 kilogrammes in 1988 and was invited to compete in Cairo (Egypt) but couldn’t attend as her parents couldn’t afford to send her. This Japanese martial art also influenced the way she understands space and affects the way she now designs.

It was while she was in Britain, with the country in the throes of panic regarding foot and mouth and mad cow disease, that Lyzadie began to follow an organic diet. She started to pay more attention to the ingredients labels on the food she bought and was taken aback. The bach is large enough to accommodate three families.

She decided that she couldn’t trust what she bought, that so much emphasis on foodstuffs was the bottom line, not what went into the product. She also missed the New Zealand outdoors with its bush, rivers, lakes and beaches that have so nurtured her soul and inspired her design.

Her decision to eat organic gave her back that relationship, she believes; it renewed her connection with nature. Michael is also passionate about New Zealand, and the couple has passed this depth of feeling onto their children, traveling throughout the country.