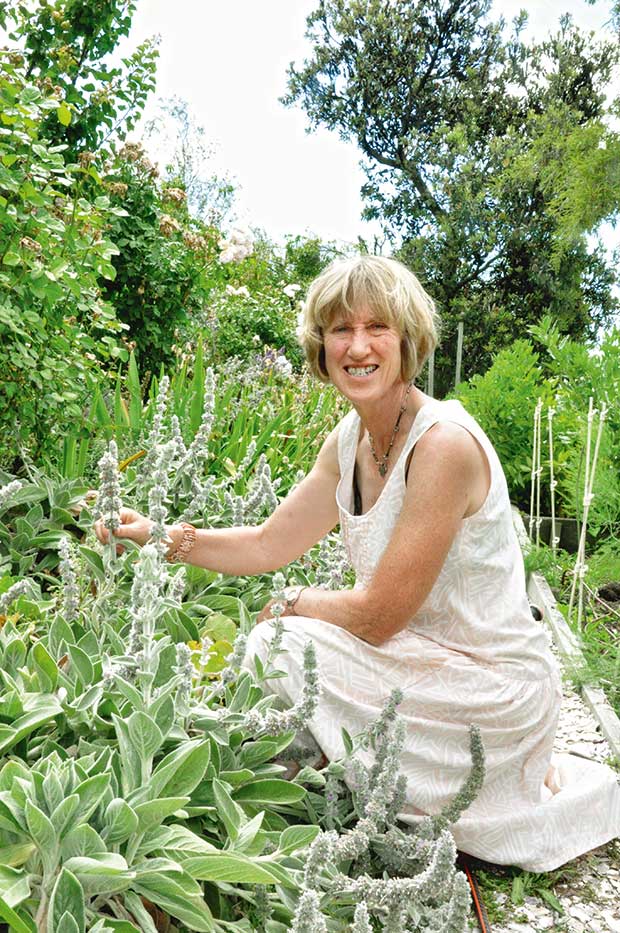 A garden doesn’t get much trickier than a steep slope by the sea, but this one produces enough to feed a family, a community, the birds, and the bees.

Mary Sullivan’s eco-paradise sits high on a slope overlooking a picturesque seascape. The passionate cook has a terraced garden – “the way to do it on a steep slope” – growing an abundance of flowers, herbs, berries, fruit, and vegetables.

She bubbles with enthusiasm as she wanders through her garden, 22 years in the making, and still evolving.

In summer, tomatoes grow like triffids. Luscious raspberries hang from bushes, herbs and flowers are interspersed among a bounty of vegetables. Espaliered pears line the paths. Even the citrus trees are blooming on this tricky site.

“I’ve had no aphids for two years,” boasts Mary. “By having this diversity of plant life, we’re bringing beneficial insects into the ecosystem.”

But even after two decades, Mary is still experimenting. “I’m trying a new treatment for psyllid, using a high dose of silica. It’s about strengthening the cell walls, so the psyllid can’t penetrate.” Mary has learnt to make the most of her South Island coastal micro-climate. She is especially proud of her latest project, trialling three varieties of kumara which tend to do best in the northern half of the North Island.

“I like trying something quite edgy, that is, not straightforward. Kumara is expensive to buy, and people want to grow it, they just don’t know how. Once I can grow it successfully, I can transfer the skills to others.” 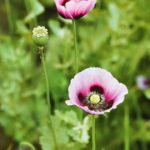 Bluebread poppies are one of Mary’s favourites. “Aren’t they beautiful?” says Mary. 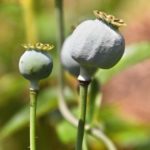 “You open up the case and the seeds just fall out.”

Around the greenhouse are pots of marginal plants including ginger, true turmeric, and galangal. “Just for the challenge,” says Mary.

A pot containing a pepino cutting sits under a plastic bag. “My mist unit,” she laughs.

Ask Mary about anything in her garden, and she’ll give you the rundown on its history, propagation, and source, along with great recipes for healthy, delicious food.

Mary puts much of her garden health down to diversity. The more variety in the landscape, says Mary, the fewer the issues with insects and predators.

“There’s so much variety they don’t see the plant they should be attacking. I also provide host plants. For example, my cleomes are a host plant for the shield bug, so they feed on the cleomes rather than my tomatoes.” Mary is proud of her latest successful experiment, growing a type of kumara known as Okinawa. The young shoots and leaves are edible, and the tuber itself is beautiful, says Mary. “Purple all the way through!”

More stories you might like:
White sapote, kumquat and cherimoya: 3 exotic fruits to add to your garden this winter

Growing without herbicides and pesticides seems obvious to Mary now, but it wasn’t always the case.

Her father was a classic, conventional vegetable gardener who grew all the family’s spuds for the year on a half-acre Dunedin section. Mary followed in his footsteps, attending Lincoln College in 1979, 1980, and again in 1985 to study horticultural management. 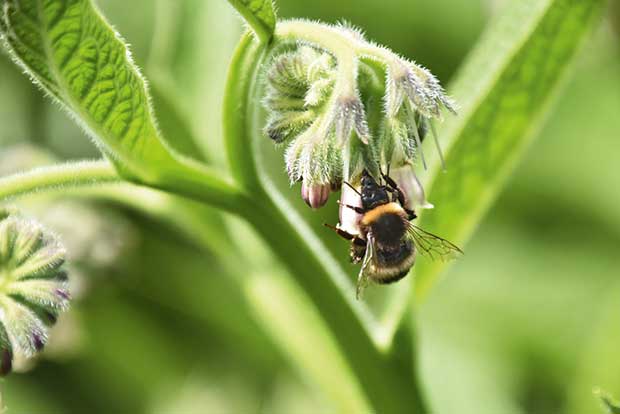 Insects play a huge role in Mary’s garden, from pollination to predator control.

Organics was a fringe movement. Chemicals were still the first port of call for garden problems. Mary’s husband, Elton, admits he was happy to use a bag of Nitrophoska Blue.

“I still made compost, but it was easier to go and put a few granules around to kick things along.”

While working for a large horticulture company, Mary remembers a flatmate telling her the stuff she was selling was not good for the soil. “At that point it was too early for me to understand why.”

After the birth of her daughter in 1996, Mary grew more serious about exploring sustainability. 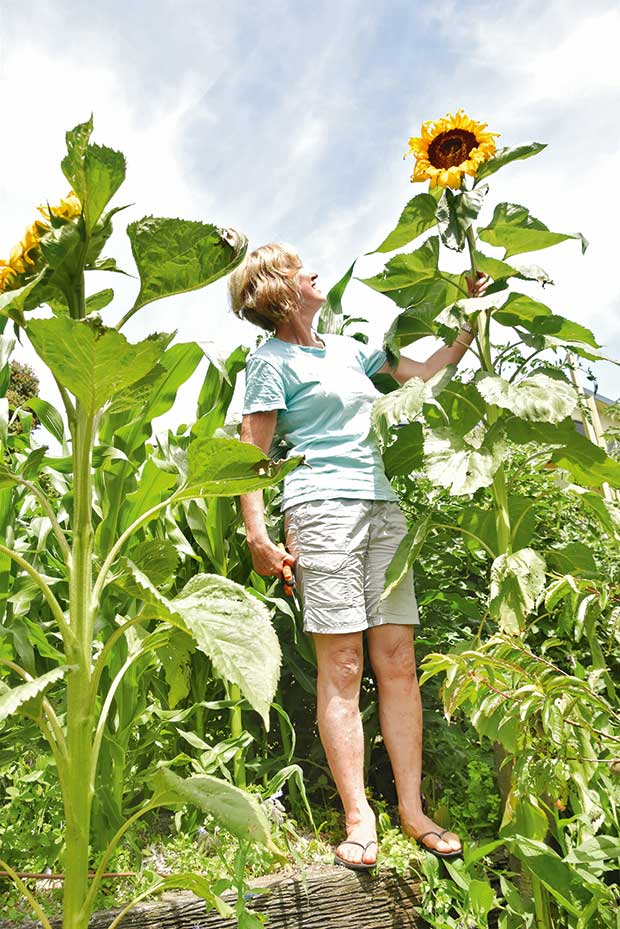 “I realised the impact sprays were having and that how we were growing would impact our daughter. The same message kept coming through in my reading. I needed to take action.”

“All the bugs they had, they had local solutions for, without using chemicals,” says Mary. “They would make up concoctions of garlic and chilli peppers. I’d heard about it, but it was the first time I had seen it, the use of traditional practices to grow things sustainably without the use of chemical sprays.” 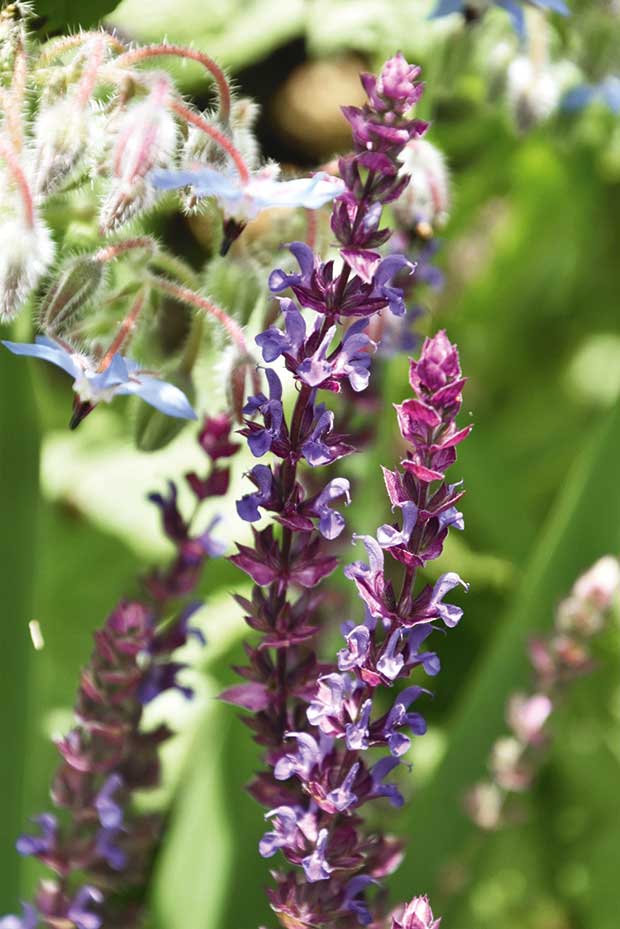 Sage flowers poking up through a patch of borage.

“A lot of our seed is now corporate,” says Mary. “But what happens to all the diversity that’s in locally-sourced-and-saved seeds?

“If you grow garlic here in a humid environment, then the seed is less likely to get diseased next season than if it comes from Marlborough where it’s dry.”

LESSONS FROM URBAN PERMACULTURE IN CUBA

In 2017, Mary spent seven weeks in Cuba. The trip was run by Canadian permaculturalist Ron Berezen who takes groups every year.

Permaculture is big in Cuba. Most of the population is poor and grows their own food. Most don’t have access to fuel, sprays or fertilisers thanks to a trade embargo that has been in place since the Cuban Missile Crisis in 1962. Most use donkeys and oxen on their properties as they can’t afford to buy or run tractors or other machinery. 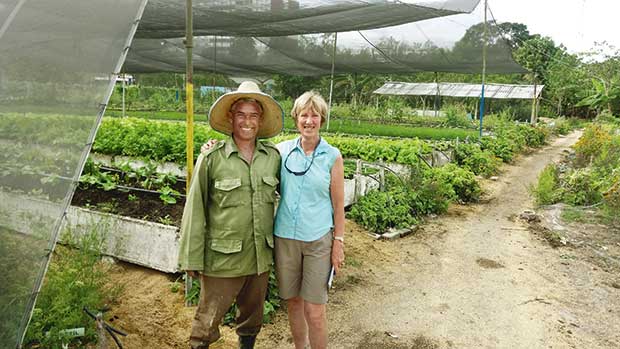 The principles go beyond the garden. Permaculture design principles are used to create communities that foster resilience. “It’s not just about growing food,” says Mary. “It’s about building strong communities. This is part of the permaculture message.”

She visited growers all over Cuba, from Havana down to Santiago de Cuba. Many growing projects she visited were church-based, catering for low income or disadvantaged groups – the elderly, physically and intellectually disabled – something close to her heart.

“It was about healing and redeeming the Earth. That was why it was so good for me.”

She says much of what she saw could be used to help those on low incomes in her community.

“I saw people on $US30 a month…they were really resourceful, just amazing. They’d take a plastic soda bottle, punch a few holes in it, connect it to a hose and that would make a sprinkler.” 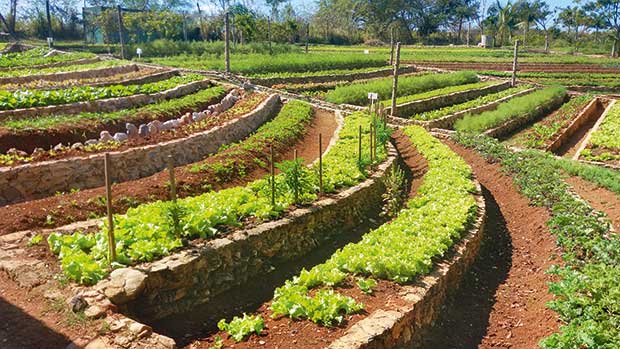 This is Finca Marta, an 8ha model organic farm, 20km from Havana. Farmer Fernando Funes turned what was barren, stony ground into a productive garden in just four years.

The trip reaffirmed to Mary that good food starts with the soil.  “The soil is the building block to health. If you look after the soil, everything else comes quite easily. I saw a thousand different ways to make compost.”

Mary says she learnt a lot she could apply to the Moutere Hill clay in her garden.

“If the alpine fault went near Nelson then Nelson would be cut off from the north and south. There is only three days food supply in Nelson. And what happens then? It’s the same scenario in Christchurch.

“It’s also about communities. How do communities support each other after a disaster? We need to create our own security of (food) supply.”

Originally derived from the words permanent agriculture, coined by Australian ecologists David Holmgren and Bill Mollison in the mid-1970s.

It is a system that mimics patterns in nature to create sustainable, resilient food supplies. There is no use of chemicals or petroleum-based fertilisers.

He says in essence what you are attempting to do is create a framework of plants and animals that is self-steering, that supports itself with no outside inputs required.

Animals are a normal part of the growing system, says Mary.

“If you look at traditional societies, they all have animals. It’s more difficult to achieve a healthy microbial soil balance if you don’t have animals.” 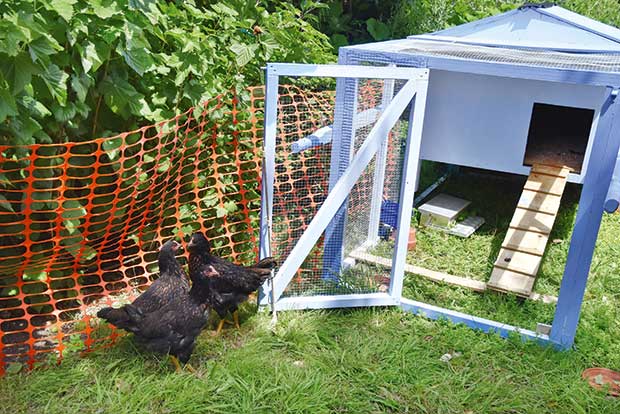 The latest additions to Mary’s garden are three Barnvelder pullets in a mobile run.

“It’s not just about eating eggs,” she says. “They eat things like codling moth larvae and scratch up the soil, and they add fertiliser.”

DEALING WITH THE GLUT

The production rate of Mary’s garden is impressive. Fortunately, she is a passionate cook, happy feeding two people, or 200.

“Bringing people together over food is another permaculture principle,” she says. “And I love finding recipes for dealing with the glut in my garden.”

Any surplus produce is donated to refugee families or Kai Food Rescue, a charity run by the Nelson Environment Centre. It reduces food waste, and helps vulnerable families get food for free.

The amount of food grown in this garden is so remarkable that even the birds are happy. Mary’s raspberries are proof, growing unprotected and unmolested by scavengers. “They obviously already have enough to eat!”

Mary also enjoys her garden as a healing space. In 2016, she had a mastectomy, following a breast cancer diagnosis.

“Just being in the garden was a source of healing. It reinforced for me the connection between food, what I grow, and health.”

Mary grows sunflowers for their beauty. She believes people can get too purist about having edibles.  “We’re not just practical human beings, we also have a soul that responds to beauty. So we want to nurture that side
of us.”

THE FIGHT FOR THE TOMATOES 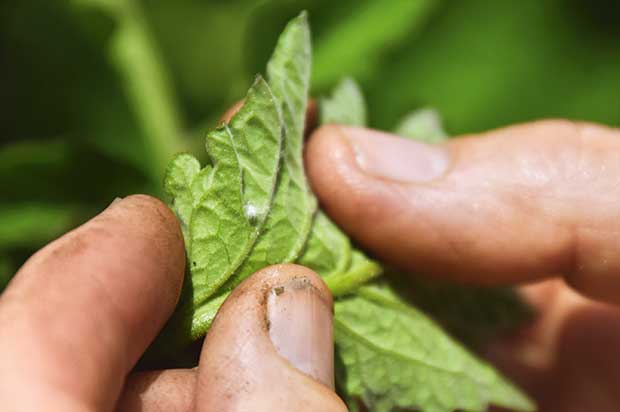 Psyllid on tomatoes is difficult to control. Mary has had moderate success with three products from Wally’s Gardening Products: