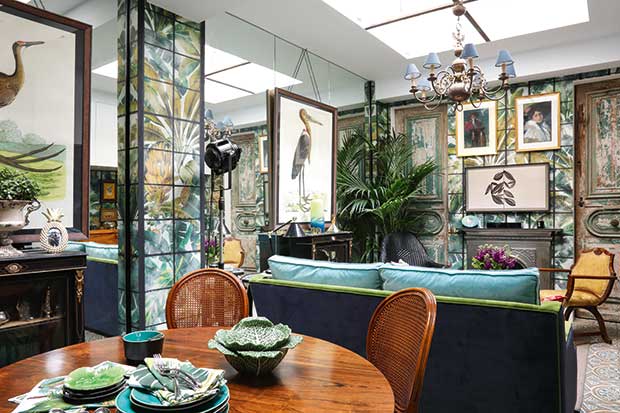 A top interior designer has a new London pied-à-terre and a modern side business — one that builds on the links between home, wellbeing and state-of-the-art technology.

Some might argue that a 65-square-metre apartment, without any side-facing windows, might best be decorated in calm, pastel tones to enhance its sense of space.

“Oh yes, some might say that,” agrees designer Neil McLachlan who has more than once surprised and delighted NZ Life & Leisure readers with his creativity.

“But not me. Oh no, I’ve gone for visual illusion — all the way. It’s mad, it’s fun, and it is fair to say that I would not necessarily wish to live in the space for 365 days a year. But then, I don’t have to.” 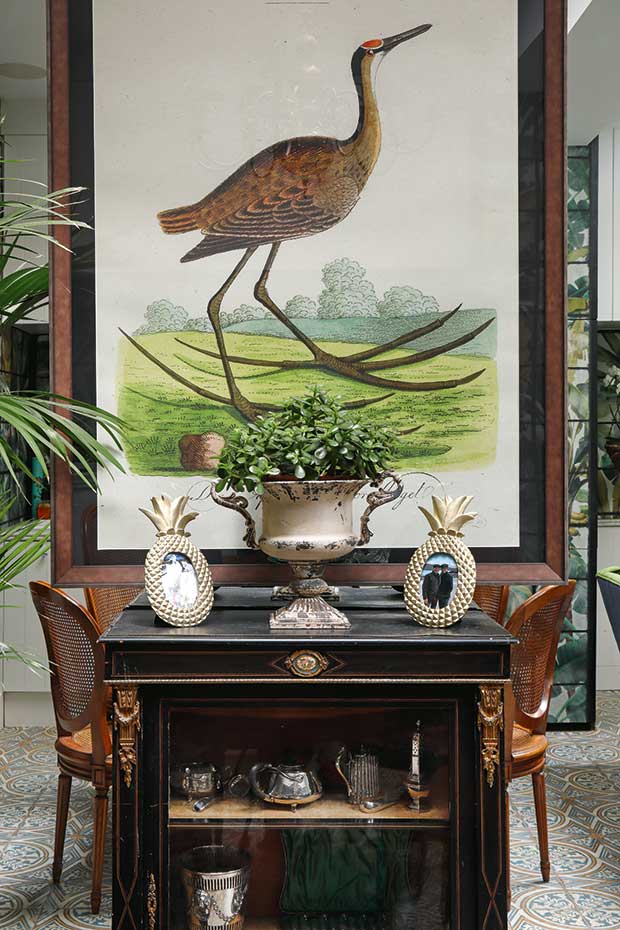 The matching glazed cabinets beneath the bird prints came from a local auction house and display silver that he is carrying — piece-by-piece — to London from New Zealand in his hand luggage. “The silver originally came from my great-grandparent’s home in Worcester, so it has done a full circumnavigation of the globe in the past 140 years,” he says.

Neil’s international interior design business takes him around the world, with clients in several European countries as well as Australasia and North America.

He blames “a certain magazine editor” (indeed, the author of this story) for recommending he buy a bolthole in London given the amount of time he spends there. His excitement, once he began looking, grew with the realization that London property represents excellent value in this post-Brexit era.

“I expected a hovel when I first saw the online ad for an apartment in Russell Court, a very handsome mansion block and a great London address. For an affordable flat in that area, I thought it must be a basement dump. However, it is a wonderful space in a courtyard behind the block — in the original workshops. Even though it has no side windows, there are huge overhead windows.” 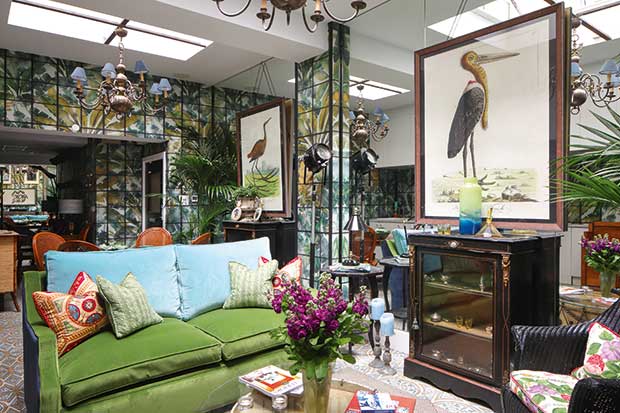 Designed by Neil McLachlan, the interior of this tiny apartment in London’s famous Russell Square takes its cue from the Edwardians’ fancy for palm houses and reflects the exuberance of the original locals, the Bloomsbury set.

In Neil’s world, there are three non-negotiables for a decent living space — light, volume and architectural elegance. In this lean-to toolshed for a London mansion block, he found the holy trinity. Since opening his magician’s box of smoke and mirrors, he has transformed every centimetre into a useful two-bedroom, two-bathroom home away from home.

Neil says the Edwardians were crazy about palms and loved having aspidistras everywhere, so he has happily followed their lead.

The wild, palm-covered wallpaper comes from Transylvania (where else?) and is called The Orangery, the chateau doors came from France via eBay, and the two elegant framed birds were discovered in a quirky little shop in nearby Covent Garden. 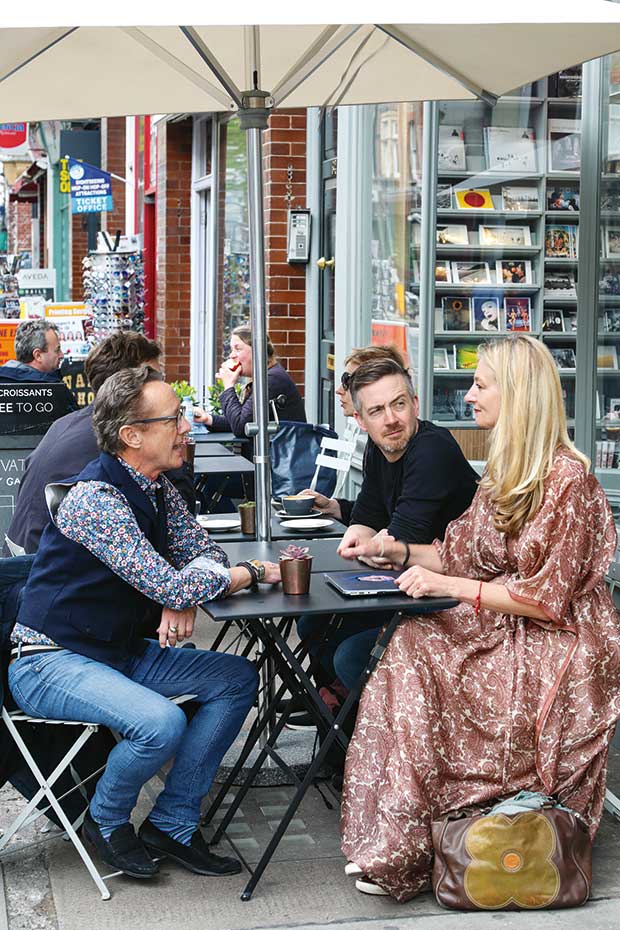 Maxine Hamilton Stubber (right), osteopath to the Royal family and household, with business partners Neil (left) and Tom Roberts, says integrated wellbeing spaces are a sign of the times.

“I found everything locally or on eBay. It’s been such fun hunting around. Those barmy bird engravings were just 20-centimetres high but, with technology, I was able to copy them and have them blown up to this enormous size for framing.

“Gorgeous, original artworks with presence. Just like that. One bird looks as though it is wearing antique wooden skis, and the other is dressed for a formal dinner party.” 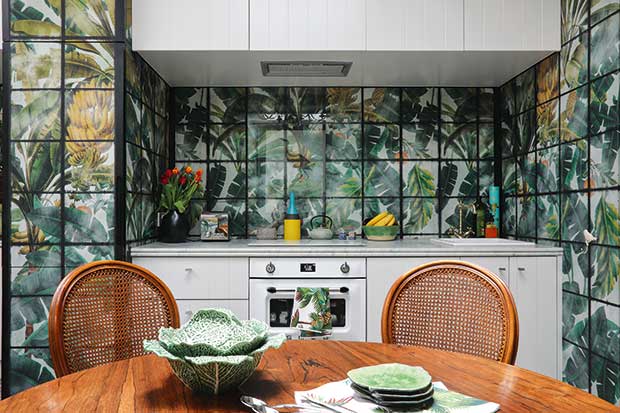 Wishing to “warm up” the apartment, Neil purchased what’s nowadays known — somewhat derisively — as “brown furniture”. “This furniture is beautifully made and, at the moment, as cheap as chips because of the inexplicable preference for modern mass-produced rubbish.”

Neil’s reinvention of this space attracted the interest of his lifelong friend (and former Aucklander) Maxine Hamilton Stubber, whose long-standing, London-based 21-year career in wellbeing and osteopathy includes regular clinics in Buckingham Palace, treating the Royal family and members of the household.

Maxine knew from her business WOW (We Own Wellbeing) that people need time-out from the hectic bustle of life. In response, she and Neil and a third partner, graphic designer Tom Roberts, launched room 2 breathe (r2b) to provide wellbeing “awakening spaces”.

More stories you might like:
Made to last: This Wānaka-based couple is embracing circular design with flax and plant-based resin 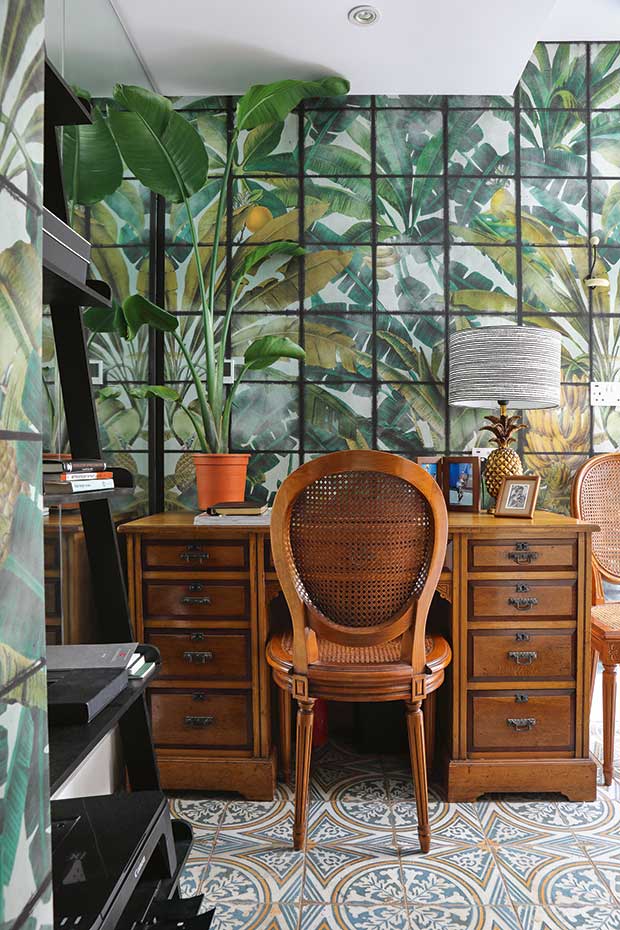 “Maxine describes them as ‘consciousness hacking spaces’; places where people can recalibrate their mind and integrate their whole state of being,” says Neil.

“The premise is to create an environment that transports people completely, so they shift consciousness and meditate. Such spaces allow people to go to a different level of being. To launch the project, I had to volunteer up my bedroom as the prototype space.”

The bedhead in the master bedroom folds down to create a meditation platform, bathed in light from a backlit three-dimensional tetrahedron that uses Arc Crystal technology developed by the Resonance Science Foundation, says Maxine. 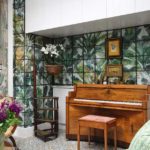 The art deco piano was another eBay find. Neil says all visitors presume the Spanish-looking floor tiles throughout the apartment are original, but he imported them from Ireland. 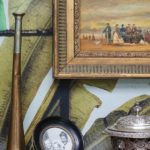 In the small, round black and white photograph are Neil and his older brother Craig and their late mother, Phyl, whose forebears came from Hanley Hall in Worcester. 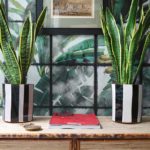 Neil’s great-grandfather emigrated with his silver and, on the family’s arrival in Christchurch, started Davis Gelatine, which became one of the city’s largest employers.

The foundation, a global non-profit based on the theory of unified science by physicist Nassim Haramein, maintains that everything in the world is connected.

“Another r2b signature element is art,” adds Maxine. “For example, for the prototype, we used an ori”ginal photograph of a jetty stretching into still waters by Nelson artist and photographer Craig Potton.

“Several influential British businesspeople have come to visit the space and talk about the project as potential backers and investors.” 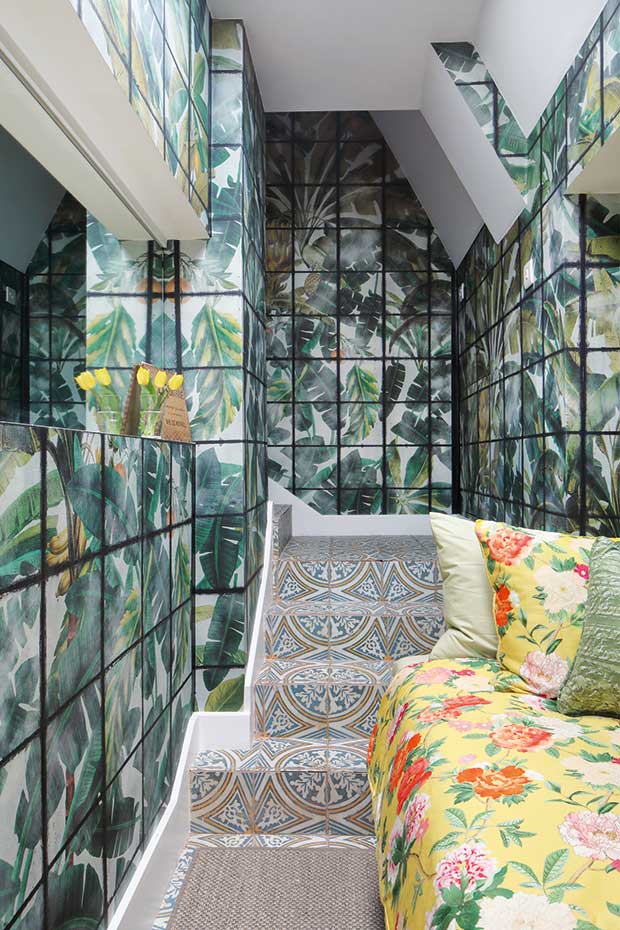 Maxine says the timing is right for the business. “We are at an interesting time in human history, which doesn’t necessarily mean getting answers to our questions but asking different questions — a time for stillness, reflection and contribution,” she says.

“It’s inspiring to be collaborating with Neil, who is a lifelong treasure, in this new venture. R2b offers breath work and meditation drop-in classes with not only traditional teachers but also the latest in technology, giving live bio-feedback from the brain and heart — hacking consciousness.” 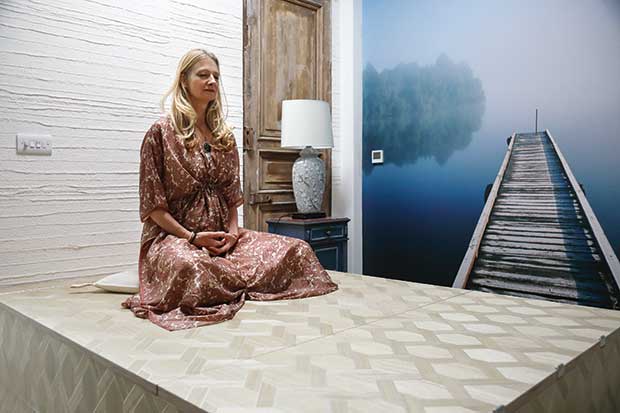 The master bedhead folds down to provide a meditation/wellbeing platform bathed in light and looked over by an original Craig Potton photograph.

“This is not just a money-making idea,” adds Neil, “but a genuine belief that the world is in such a crazy state that people need a sanctuary. People’s homes are no longer the peaceful places of respite they once were thanks to the wretched phone and laptops.”

Creating spaces which, in old parlance sound remarkably like churches (“peaceful places of solitude where world noise is pushed back, and the environment is conducive to contemplation”) is not just a “hippy-dippy idea” but part of an international movement. 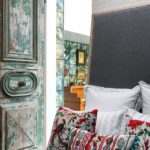 The bedhead folds down to provide a peaceful meditation/wellbeing platform in a small urban space. 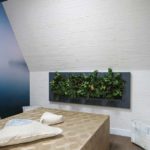 The apartment does have the smallest guest bedroom in the world,” says Neil. “But that’s for a certain editor when she comes to stay, and she can’t complain as I hold her quite responsible for me even having the flat in the first place. Anyway, my friend Tall Paul, who is 6’4” [1.93 metres], has just stayed in it, and he loved it”. 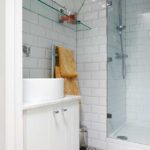 Tiles imported from Ireland continue into the bathroom.

“This idea is topical worldwide, with people recognizing that technology can be embraced healthily,” says Neil.

“People are beginning to treasure handmade items again [r2b meditation cushions are individually made and embroidered by British charity Fine Cell, which supports prisoners], seeking unique pieces and bringing foliage and plants into their homes.

“They are looking to nature again to nurture wellbeing and health.”

A WALK THROUGH RUSSELL COURT

Russell Court, just off Russell Square in London’s Bloomsbury area of Camden, was built in 1937 for £250,000 and houses 500 individual flats.

It is considered an excellent example of Art Deco architecture — a style that arose following the 1925 International Exposition of Modern Decorative and Industrial Arts in Paris. 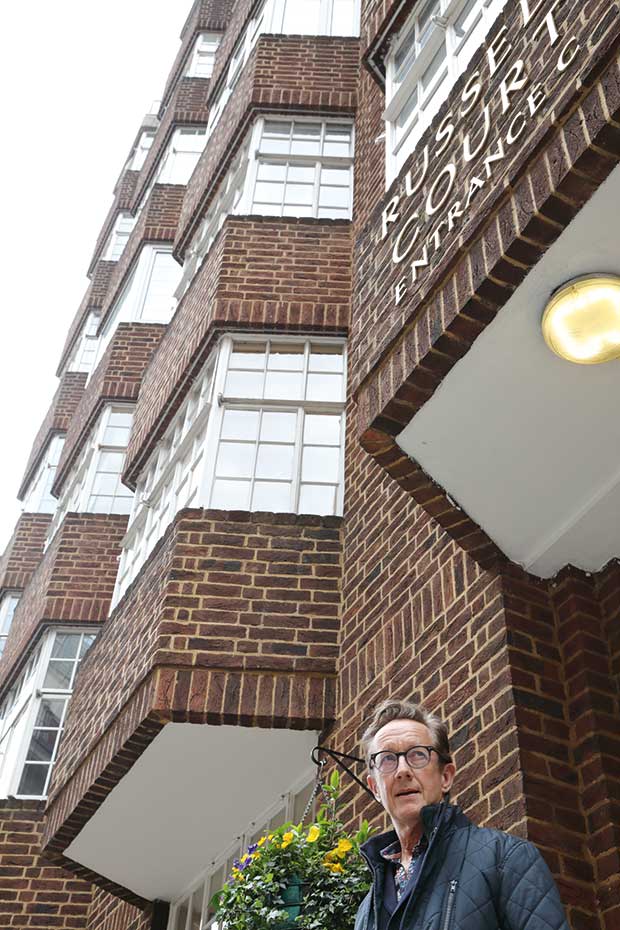 The trend was short-lived; World War II brought it to an abrupt end, leaving early skyscrapers, cinemas and some public buildings including BBC House in London as its  finest examples.

The famous gardens designed by Humphry Repton (1752–1818), were commissioned in the late 1700s by the area’s predominant landowner of the day, the fifth Duke of Bedford.

The gardens were among the largest in the district, with lawns and tightly clipped hedges of privet, hornbeam and limes providing screened and secluded walking areas.

In 2002, the gardens were restored to their original layout after many changes in the preceding 200 years.

A Timaru roller-derby dame’s slice of life is colourful, retro, and everything in-between