From pest to pretty: A Dunedin furrier transforms pelts into soft furnishings 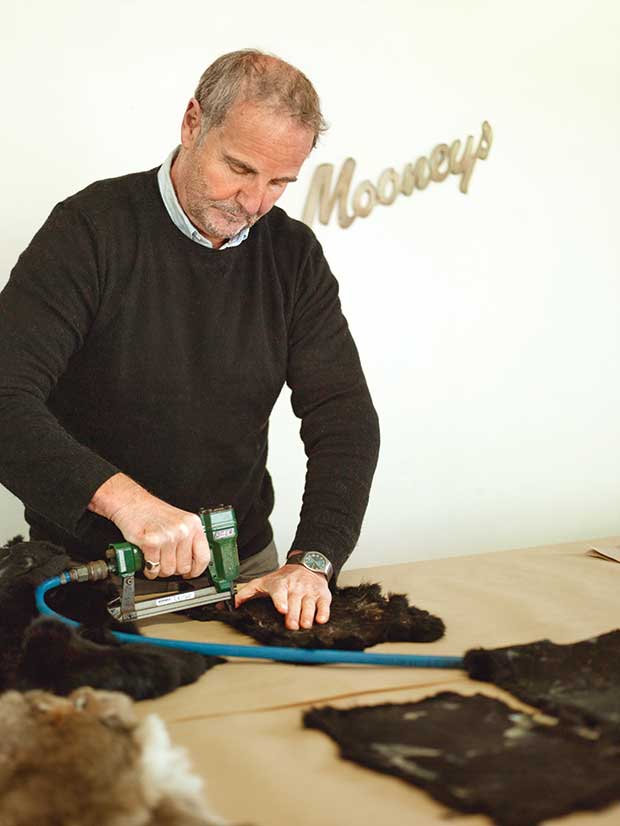 Freshly-tanned skins are stapled down to a board to help stretch them.

Mooney’s Furriers in Dunedin can turn a home-caught possum or rabbit skin into a gorgeous soft furnishing.

Possums might be one of the New Zealand’s most destructive pests, destroying native forests and feeding on native birds eggs, chicks and invertebrate, but their lusturous underwool is wonderfully soft and warm.

After close to 50 years as a furrier – not a farrier, which many people mistake him for – Max Wilson still delights in the feel of a high-grade fur.

His practiced eye and fingers can grade it, stripe it, ‘damage’ any rips or holes (which, confusingly, means to fix damage) and strand it. His sewing is so fine, seams are invisible on the pelt side. Max came to New Zealand in 1987 to work in the Mooney’s Furs workroom in Dunedin. He’s a second-generation furrier, learning the trade from his dad.

“He had his own workshop and rooms. It was an interesting and a busy time. We were doing lots of exotic furs, which are no longer acceptable. The use of fur common, even In the 1960s. It was a by-product of the pet food industry and the French appetite for eating rabbit. 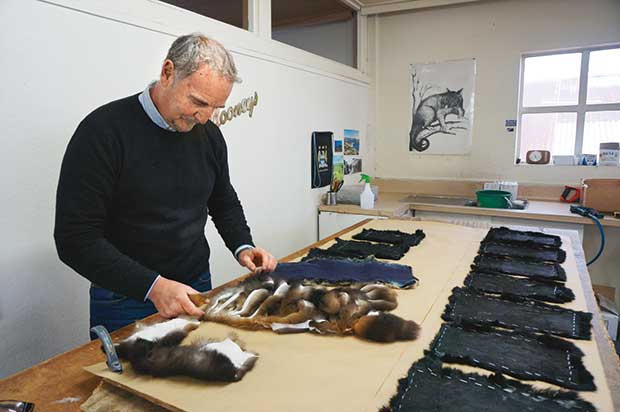 “We had a lot of what we called ‘fun furs’… you’d have a little bit of rabbit fur around the bottom of your short jacket, just a bit of bunny. ”

Mooney’s started in the 1920s as skin merchants, with manufacturing bases in Dunedin, Wellington and Auckland. It also owned tanneries in Dunedin and Woodville,
to better control its supply chain. 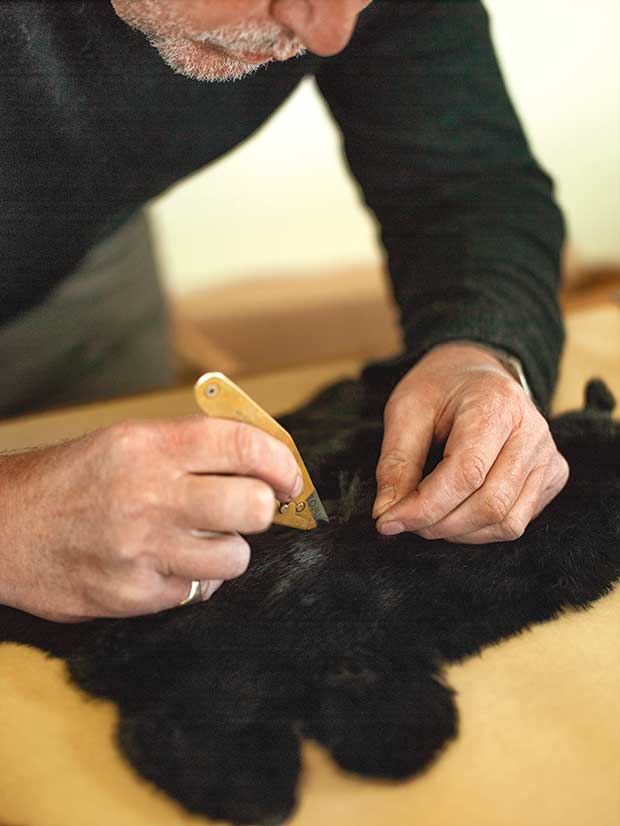 He then uses a special knife to cut the fur into strips.

Even when Max joined 67 years later, it was still a big operation, with at least 10 furriers in the workroom, plus salespeople and showroom staff. That included Heather Kirk, Max’s business partner. She started at Mooney’s in 1963 as a seamstress, before moving into sales.

While they used some local possum back then, mostly it was rabbit fur imported from France and Belgium. There was no interest in harvesting New Zealand’s most prolific pest. 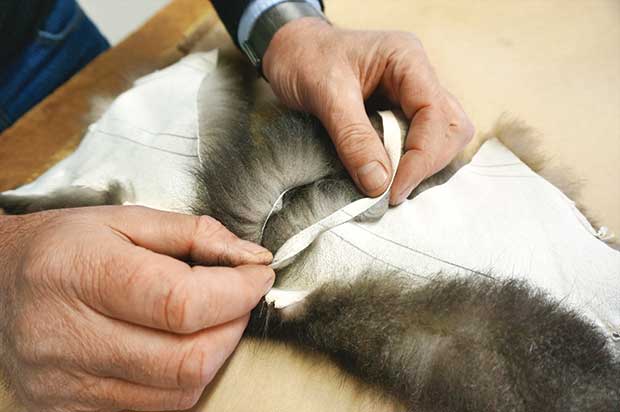 Each skin is cut into thin strips.

“Possum wasn’t worn as a garment,” says Max. “Most of it was shipped to Korea to be used as linings in winter coats.”

More stories you might like:
8 cute-as-a-button tiny homes around the country — from suburban Auckland to Central Otago

When the previous owners decided to sell during a tough time for fur in the late 1990s, Heather and Max teamed up to make a go of it. 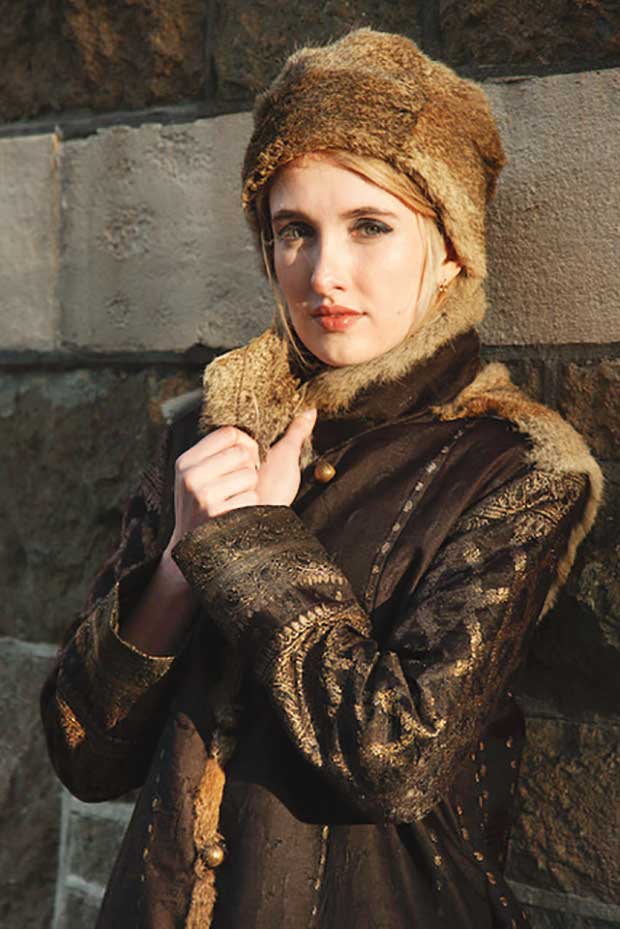 Today Mooney’s Furriers is a team of two. Max does the cutting, stranding, and sewing. Heather uses her seamstress skills to attach fur trimmings meticulously, and deals
with sales.

“Fashion is cyclical so within a year fur was back in fashion, and we’ve had lots of work since then,” says Heather.

Fashionable because the focus these days is on using ethical fur, which is the only kind of fur Max and Heather will touch.

“In this country, possum and rabbit fur is quite sustainable,” says Max. “So that’s all we use, aside from antique coats that people want repaired, or made into cushions or throws. Antique coats are very common in second-hand stores so not worth much, but they make great cushions.

“If there’s sentimental value, it makes sense to make something usable from a coat that was just going to sit in the wardrobe and get eaten slowly.” 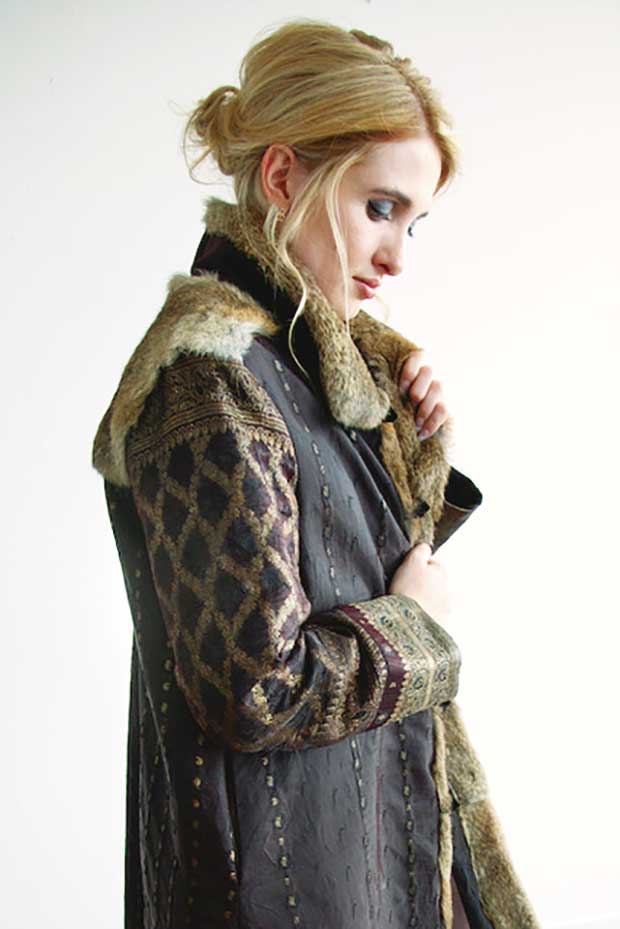 The focus is now on using ethical fur, the only type Max and Heather will touch.

Possum is the main fur Mooney’s deals with these days. They also use a little rabbit on academic trim (mostly imported fur), or locally sourced furs on fashion garments, such as for Dunedin design label, Lapin.

“We make coats and jackets out of possum skins for New Zealand shops and tourist outlets,” says Heather. “We make a lot of throws, fur collars, and cuff sets, headbands, pom-poms. We’ll make anything that can be made out of possum fur.”

HOW TO GET FROM PEST TO PRETTY

Max is more than happy to take furs from the public if they’ve been properly tanned and treated.

Every skin is stapled to a board to stretch and smooth it. Then Max gets out his curved, German-made furrier’s knife that is as sharp as a possum’s incisors. Probably sharper.

It takes a delicate touch to slice the skin but not the fur fibre. 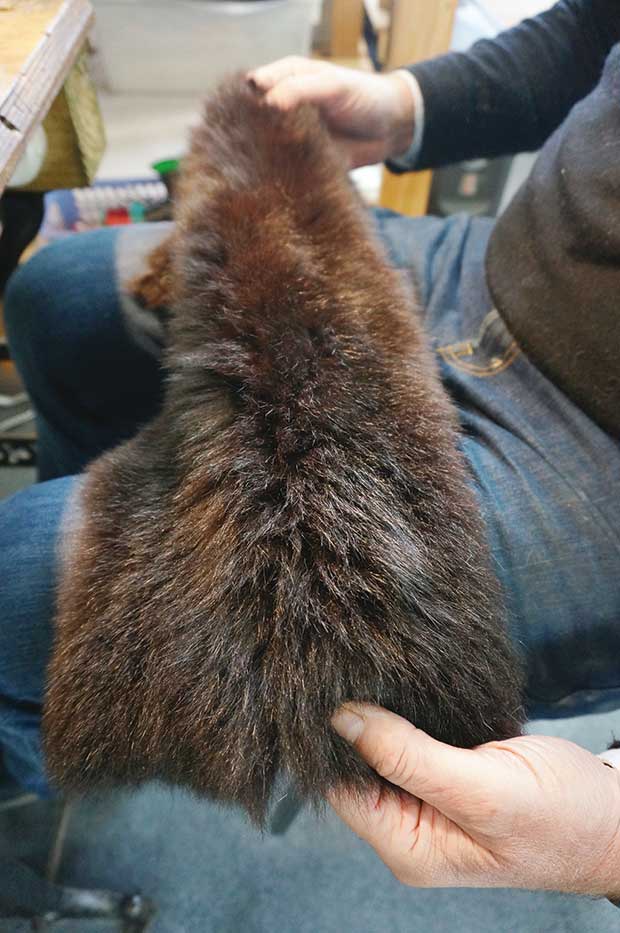 The result is a straight piece of fur that is easy to use in clothing with no visible seams.

First, he cuts away the undesirable belly fur (it’s not strong enough to work with).

Even a beautiful pelt is not perfect. There is a natural taper to a possum, and the hair is longer at the top than at the bottom. To create a perfect-looking final product, Max must cut each skin into thin strips in a uniform width. He pencils in lines in 1cm increments; any wider and the difference in the hair starts to show on the pelt-side.

He cuts, then severs the skin at the edge. Each strip is then moved lengthways slightly, a process called ‘stranding’. The strips are then sewn together using a special machine which makes the seams invisible. 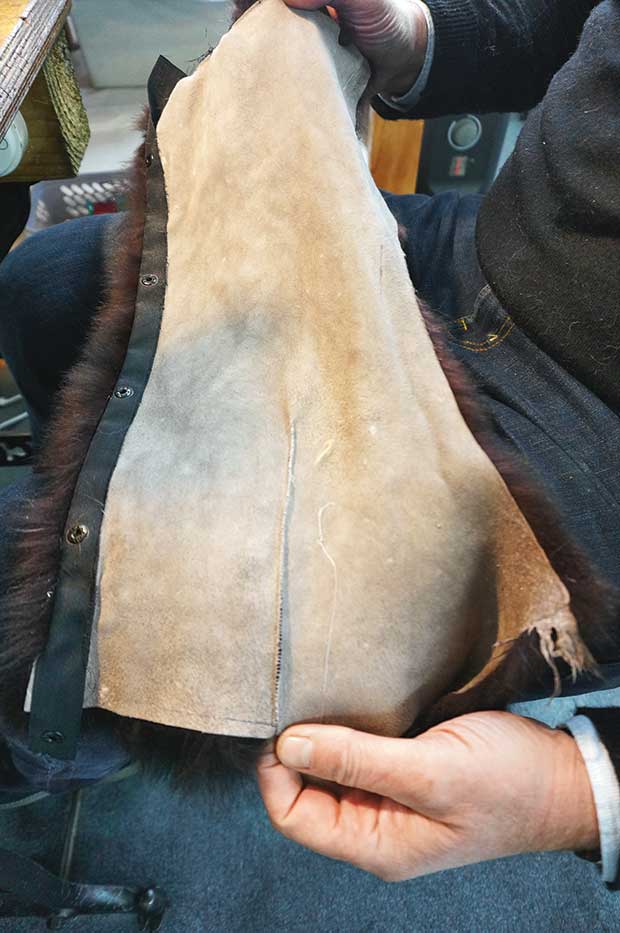 The seams are difficult to see, even on the underside.

This clever technique means 55cm-long possum pelt can be lengthened into a maximum 120cm strip of fur. It is also more supple, has a better drape, and moves more freely.

Each strip can be sewn to other strips to create a garment or furnishings like cushion covers and throws.

If it’s to be attached to a cape, coat or collar, Heather’s nimble fingers take over, turning over just enough of the fur to sew it into the fabric.

It’s not cheap to have a possum throw or footer made for your bed. 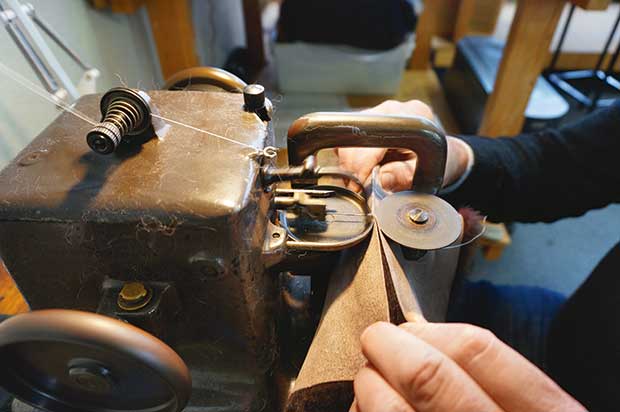 “We need two skins for a cushion cover and 40 skins for a double bed-sized throw,” says Heather.

“We used to sell a lot of 60-skin throws, not so much now. They’re beautiful but heavy.

It’s cheaper if you can supply your own skins. Max says he finds his work very satisfying. 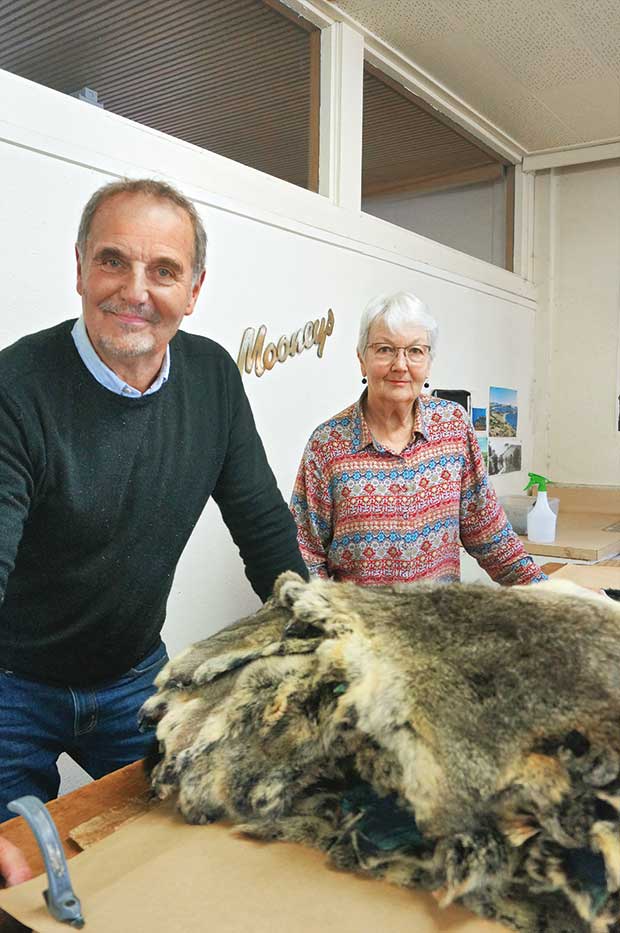 “I enjoy working with fur. I find it quite creative, working with your hands. And you get to make a bundle of skin into something quite unique and beautiful.

“You’re problem-solving – always trying to make the best possible job out of what you’ve got.”

MAX’S TIPS TO GETTING THE BEST POSSUM SKINS

If you’re going to supply possum skins, you want to catch them with their winter coat. It’s best to trap a possum rather than shoot it, then kill it with a bolt to the head to prevent damage to the skin.

Then have a close look at the skin to check it for quality. 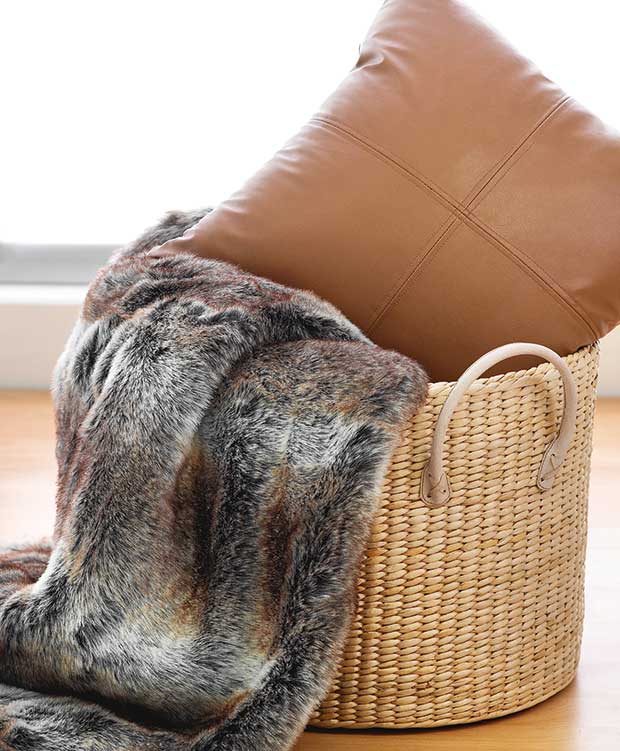 “You’re looking for density,” says Max. “There must be a good underwool – the shorter, softer fibres – and as little damage as possible. You don’t want what we call ‘windows’, which are the bald bits. These can make the fur sparse and weak, so it becomes a third or even fourth-grade fur. You’re looking for something that feels good to touch.”

If it passes the test, the possum should be carefully skinned (there are plenty of video tutorials on YouTube to show the best techniques), bagged and frozen for freshness, before it is couriered to a tanner.

HOW TO PREPARE A SKIN FOR TANNING

Properly treating a skin, before sending it off to a tanner, will prevent it from arriving as a smelly mess. You will also receive a pristine pelt.

1. Skin the possum cleanly, leaving as much fat and tissue on the carcase, not the skin, to minimise the risk of rotting.

2. Cool the skin quickly once it is removed from the animal. This stops bacteria from creating a bad smell or causing the hair to fall out. Hose down both sides with cold water to get the skin and fur as clean as possible.

3. Ideally, roll the skin up, bag it and put it in the freezer. If freezing isn’t possible, cover the flesh side with salt and roll it up, flesh-side inwards. Bag it up and courier it to the tanner as soon as possible.

It’s a good idea to double bag skins and pack newspaper, or something else, around the skin to keep it cold. 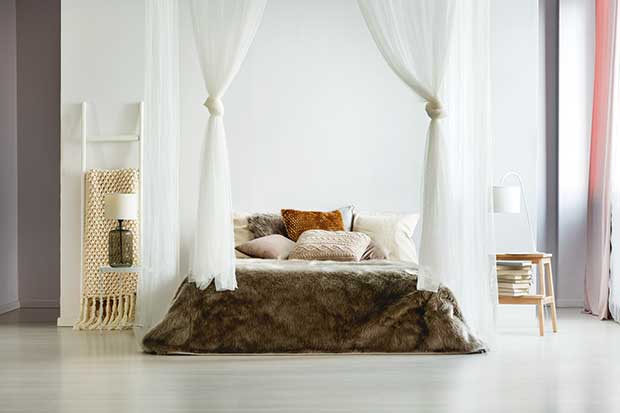 A king-size possum fur throw costs over $8000. These are made out of 60 skins and are beautiful, says Heather, but very heavy to lift.

Prices for tanning vary. You can pay around $20 a possum skin (less if you have more than 10). But if the tanner needs to clean the skin further, or there’s any damage that makes their job harder, they may charge more.