At Farewell Spit, NZ Life & Leisure staff Cheree Morrison and Jane Ussher saw nature at its most beautiful and most cruel.

As the rising sun traced pink shafts across the long fingerling of sand that is Farewell Spit, a horrendous reality was revealed. We’d come for a pre-dawn close-up with nature, wanting to capture the sun rising over the aptly-named Golden Bay, but nothing could have prepared us for what nature delivered in the morning light. More than 400 pilot whales were dying before our eyes on the sand at high tide mark. Closing our eyes didn’t help. A soft song of cries, calls, and sighs drifted on the early morning breeze.

We were first to the scene of perhaps the largest stranding of pilot whales in New Zealand, and certainly by far the largest our guide Paddy Gillooly has ever seen, and he’s been guiding people around Farewell Spit since the 1980s. The helplessness set in as we realised there was nothing we could do. Instinct was to rush to their side, to help. To do anything. But the tide was too low for us to move the massive mammals back to water. High tide wasn’t due for another four hours. Even if we’d had sheets and buckets at the ready, we three people were but a drop in the ocean.

So we waited, and they came. DoC first, then Project Jonah. Teams were assembled, and we waded in, looking for signs of life, for the flick of a tail. Over half were still, maybe more. The rest were coaxed into an upright position, the volunteers in their wetsuits and hi-vis murmuring quietly to them, encouraging words peppered with stern telling-offs as the whales rolled back onto their sides. “Come on buddy. Shove over mate. You’re alright.” 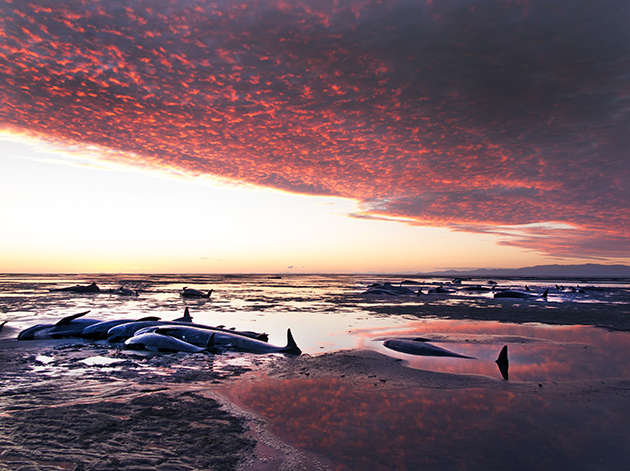 As the long arm of Farewell Spit hugged the tired whales tight, the volunteers took up their fight. They arrived by camper, by car, by foot, briefed by Project Jonah and ferried down the beach in Paddy’s now-repurposed Eco Tours bus. Young, old, local, international. Some who had seen this before, others who wished they never had. All ready to help, all waiting for what high tide would bring – respite, relief, and hope.

Just 100 whales were refloated on the mid-morning tide, but they have caused concern by swimming back into the bay. This story is ongoing. Volunteers remain with the whales and will do so until all is done. For updates: www.facebook.com/projectjonah