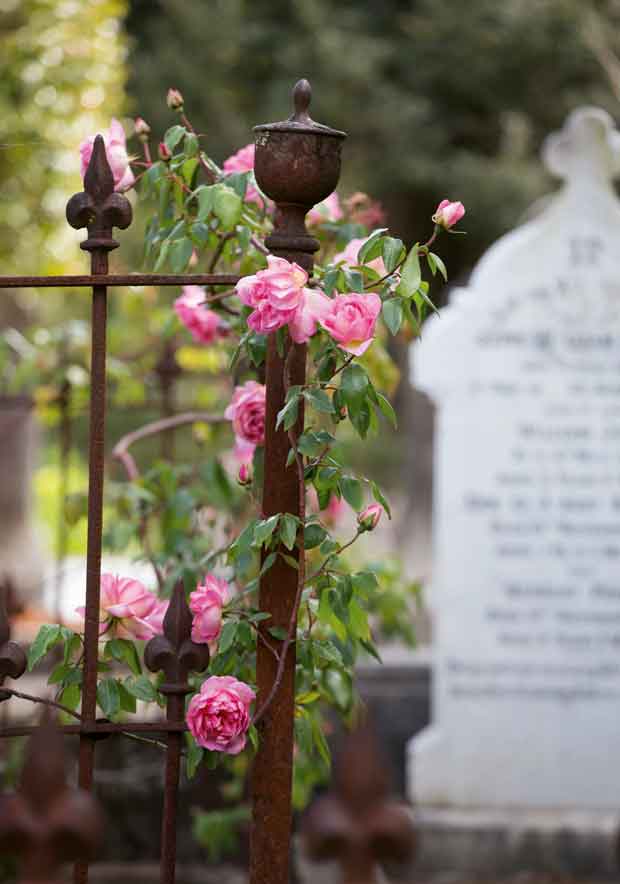 An old cemetery — the final resting place of many notable Taranakians — is fully appreciated by the still (thankfully) alive and kicking due to the efforts of a bunch of hardworking volunteer gardeners.

The Te Henui Cemetery is blooming with life. Kererūs swoop in to feed on magnolia flowers and cherry blossoms, holly berries and karaka fruit. Tūīs and waxeyes dine on the nectar of pokers, red cherry, and camellias. Swan plants attract monarch butterflies which overwinter in the grounds and salvias, echiums and single dahlias are buzzing with bees. 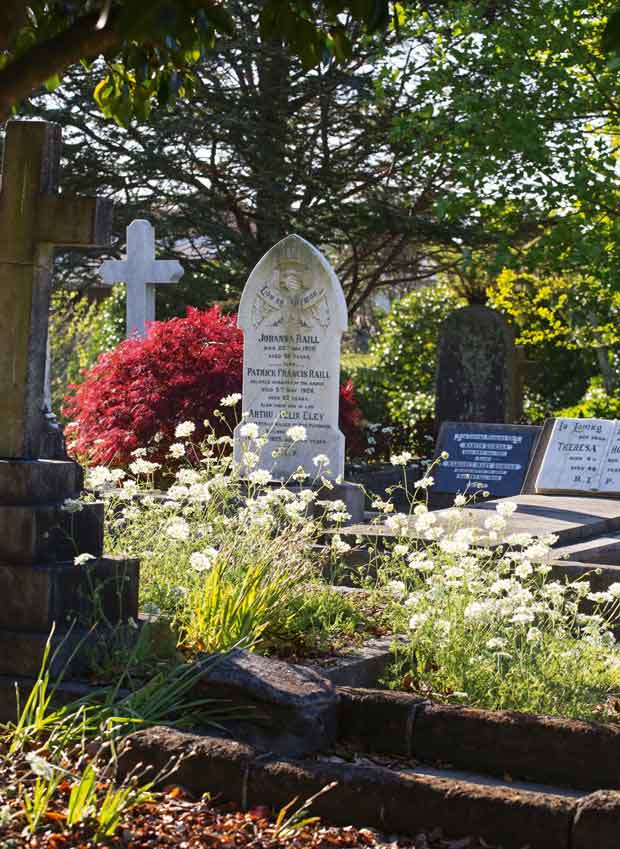 Orlaya grandiflora, an annual similar to queen anne’s lace, was chosen for its dainty looks and is planted throughout the cemetery.

Human visitors of the running, dog-walking, child-entertaining and school-bound variety also roam this historic inner-city New Plymouth graveyard daily and in their dozens. 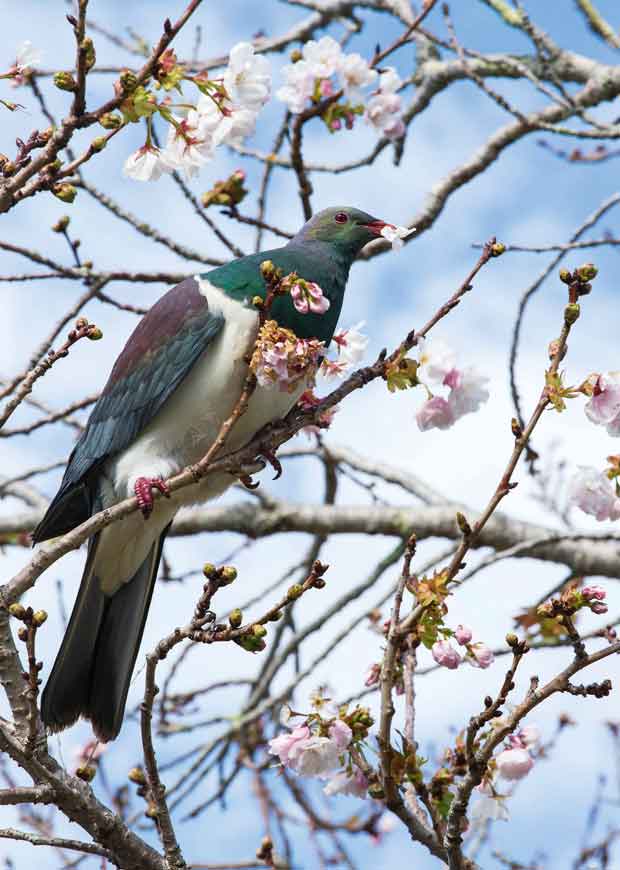 A kererū perches in an ornamental cherry. The garden is teeming with bird life, and during winter tūīs are sometimes given sugary water.

They come to picnic, to enjoy the beauty of walking among many flower-filled graves, to linger in the shade of mature trees, to hear the laughter of children at play and their chatter as they dart around the graves on their way to school. It is a busy place, yet maintains an air of the serenity deserved of sacred ground. 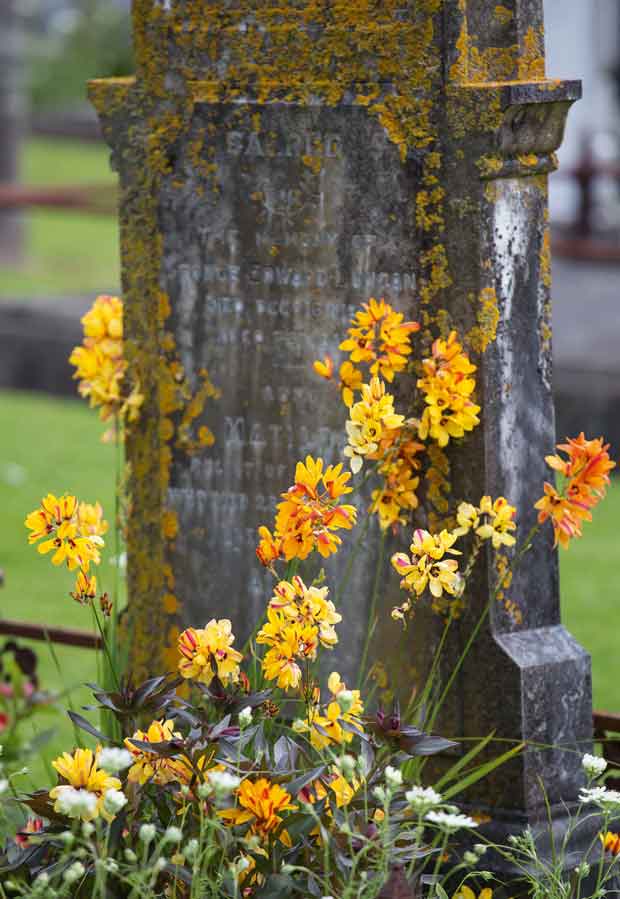 Spring-flowering yellow ixia was selected for its height.

Established in 1861, what was once a seldom-visited cemetery is now a spectacular garden, teeming with blossoming trees and bright flowers planted flush against the headstones. The New Plymouth District Council’s park department began restoring the oldest part of the garden on Arbour Day in 1984. Trees have matured to create a tranquil park with pōhutukawa, ornamental cherries, crab apple trees, and flower beds. 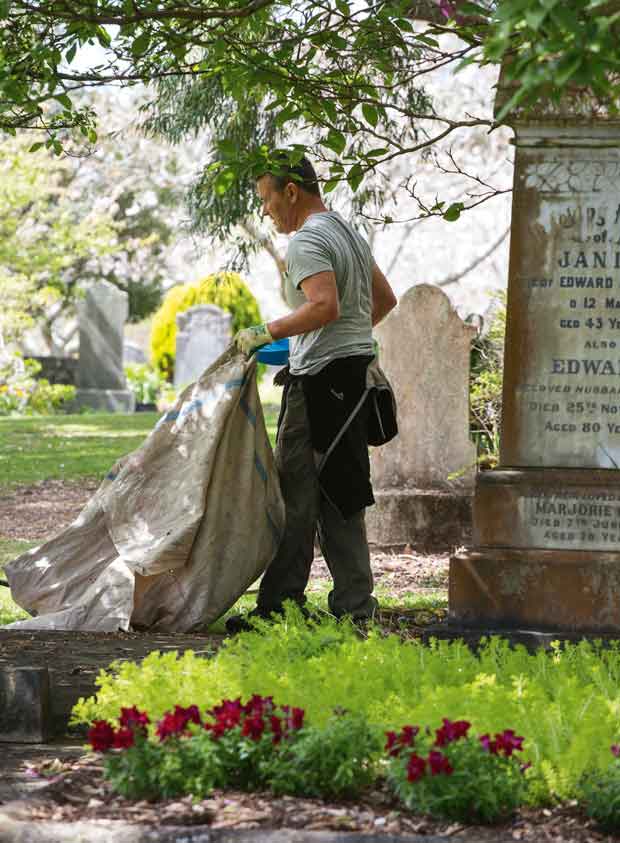 Volunteer Nick has been working at the cemetery since 2017.

In the past 10 years, seven volunteer gardening angels have taken the ground under their collective wing and are hard at work year-round weeding, trimming, deadheading, mulching, planting, dividing, and transplanting plants — and uprooting them when they change their minds. 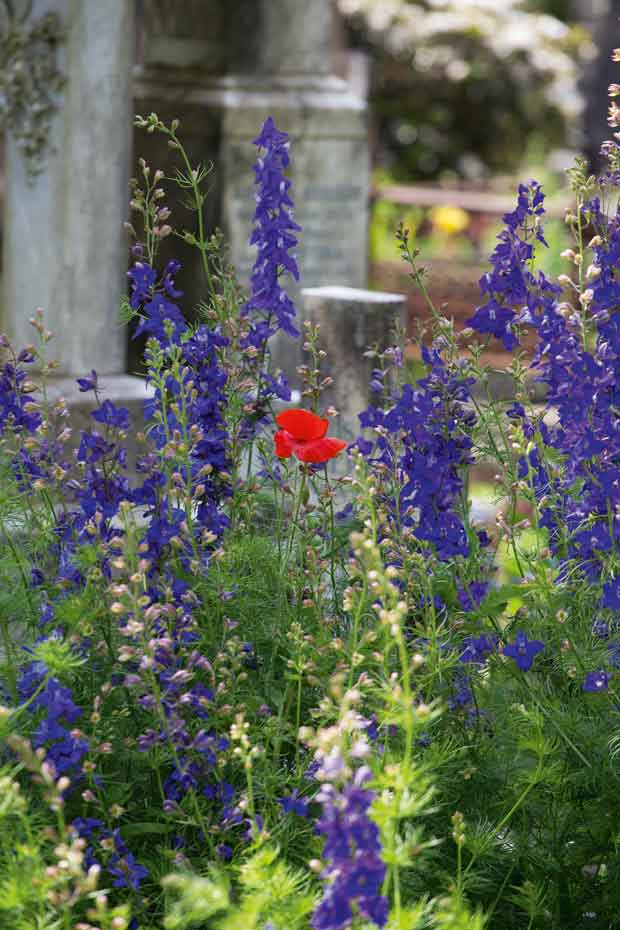 Susan has been doing this for several days each week for the past decade and has yet to have a bad day in the cemetery. She lived nearby for 18 years before she even discovered the cemetery existed and then, on her first visit, saw that it lacked love. Volunteer Mary has been gardening at the cemetery since 2015. Though the lavender, planted here near an ornamental cherry tree, is frustratingly short-lived, the volunteers persevere as they love the violet colour.

She was busy popping in some overflow plants from her own garden when Mary, a regular dog walker, stopped for a chat. While the two women introduced themselves, they idly reached down to pull out a few weeds from an overgrown grave. By the time they had completed introductions, the grave was freshly weeded and looked loved. They enjoyed the sense of achievement and on their next meeting, tidied up another grave together. 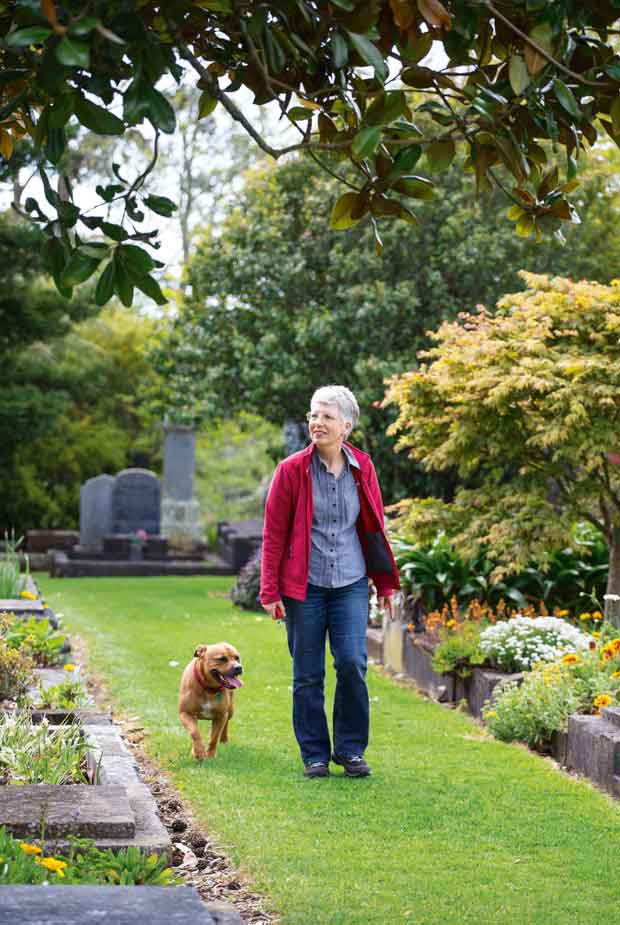 Shuna and her dog Harry are regular visitors to the garden.

One grave led to another, and now they are joined by regulars (called “vollies”), all of whom bring their own set of skills, including Shuna, who weeds as she walks through the grounds with her dog Harry. Shuna has supplied so many bluebells for the garden that a walk has been named after her. 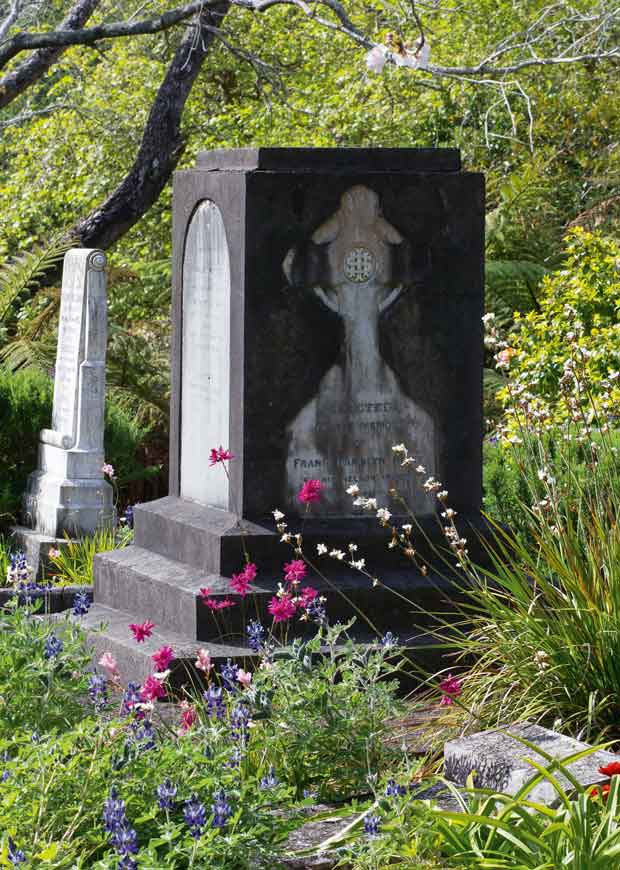 The square grave belongs to the Foote and Hamblyn families and was the first official burial in the garden. The flowers planted around it are hot pink ixia, blue admiral lupin and white libertia.

The Te Henui Cemetery is the oldest cemetery in New Plymouth and includes graves of soldiers who died in the New Zealand Wars (1845–1872). Te Henui is the final resting place of Frederic Carrington (1807–1901), a surveyor and draughtsman who laid the first stone for the main breakwater at Port Taranaki. It’s also where Monica Brewster (1886–1973), a women’s rights advocate, arts patron and founder of the Govett-Brewster Art Gallery, is buried. 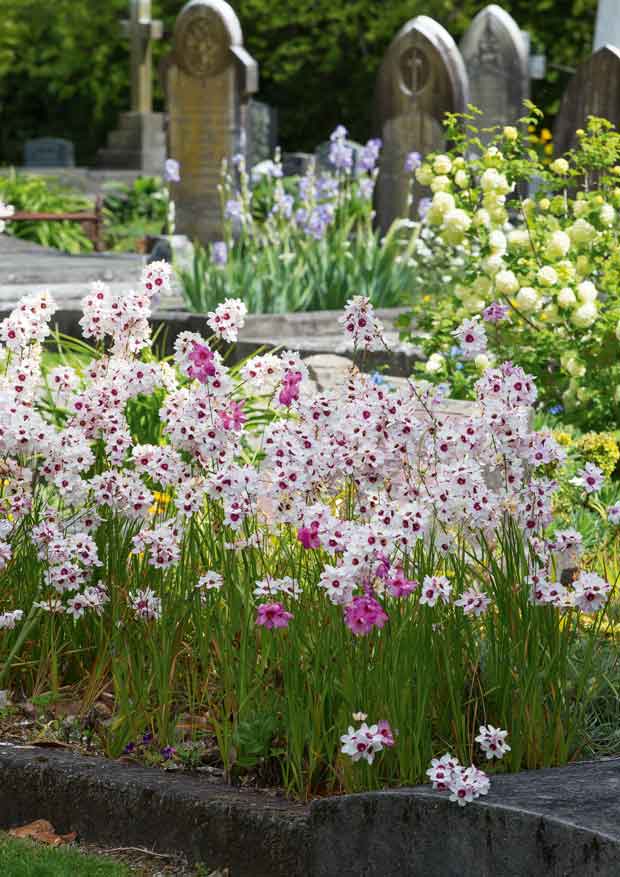 This white and pink ixias is one of many at the cemetery. Most spring bulbs are donated by volunteers, regular visitors and garden groups.

The cemetery was divided into seven different religious groups but became interdenominational in 1935. Abraham Walley (Wali) Mahomed Salaman (1885–1941), a famous Taranaki herbalist of Indian descent, is buried in a tomb built in a traditional Islamic style. The large crypt takes up the space of 10 plots, and the structure cost £2500, more than an average house at the time.
The Te Henui gardens are in bloom year-round. 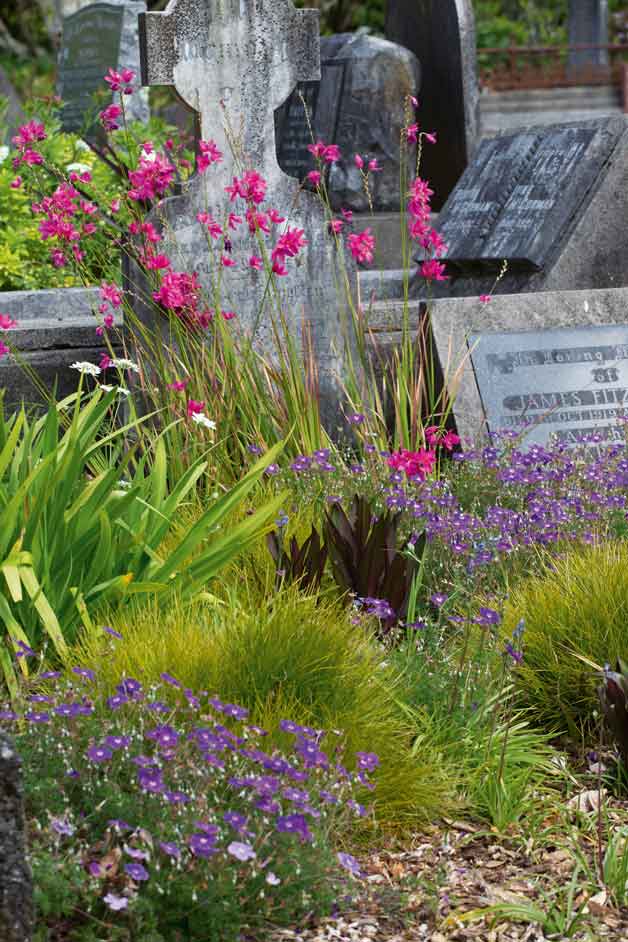 When choosing flowers, volunteers take into account the colour in adjoining areas to create year-round vibrancy. Some graves may be bare one month but full of colour at another time. Here, hot pink ixia and purple geranium contrast with a dark-leaf eucomis.

In summer there are hydrangeas, lilies, dahlias, and in winter the garden is vibrant with michelias, daphne, luculia, snowflakes, narcissus, red pokers, tree dahlias and leucadendrons. Spring bulbs include daffodils, snowflakes, bluebells, muscari, sparaxis, freesia, tritonia, ixia, babiana as well as crowd-favourite tulips, which will be in bloom around the time of the Taranaki Garden Festival in early November. 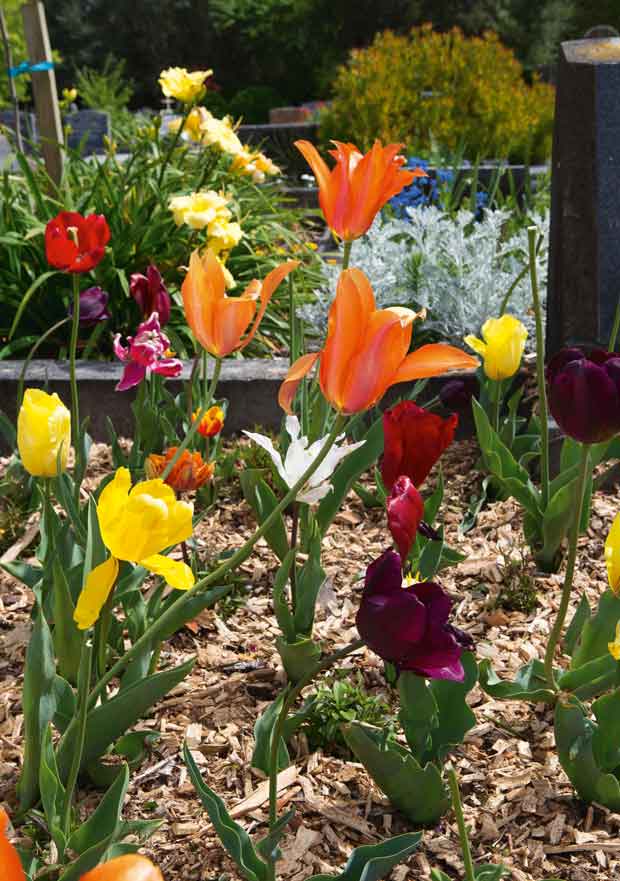 Although Taranaki doesn’t have the best climate for tulips, the volunteers think they are a good investment as they are extremely popular with the public. Approximately 600 to 700 tulip bulbs will be planted this winter, which is only enough to fill three grave sites.

Relatives of those buried in the gardens are welcome to remove plants should someone think their late great-aunt Doris wouldn’t abide dahlias on her grave. However, most of the gardened parts of the cemetery have graves dating from 1861 to 1945, which are often no longer visited by relatives. 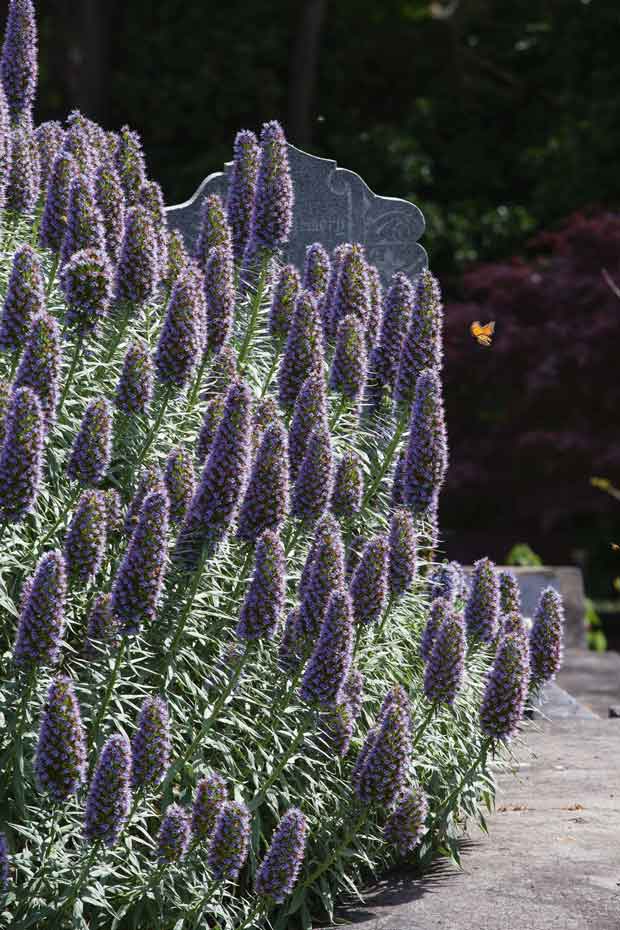 Echium fastuosum is a bee magnet and flowers for about three to four weeks in spring. It grows quite quickly and can reach one metre in height, but it only lives for about five years. Bletilla, a form of orchid, is easy to grow and provides a pop of colour in spring

The Te Henui Cemetery is open all year and will be in full bloom during the Taranaki Garden Festival, 1 to 10 November. A free programme, including a map, will be available in July, and tickets can be purchased at gardenfestnz.co.nz 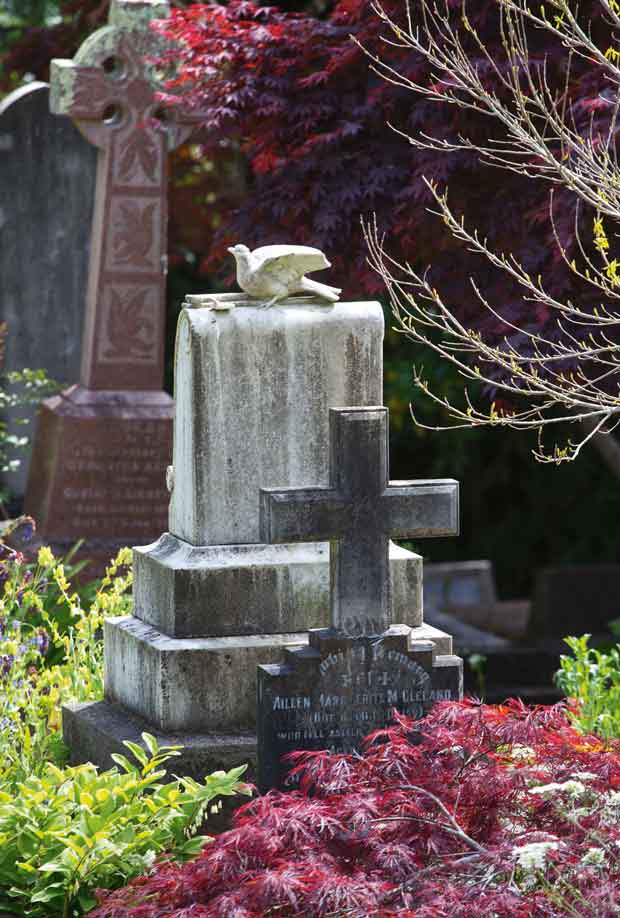