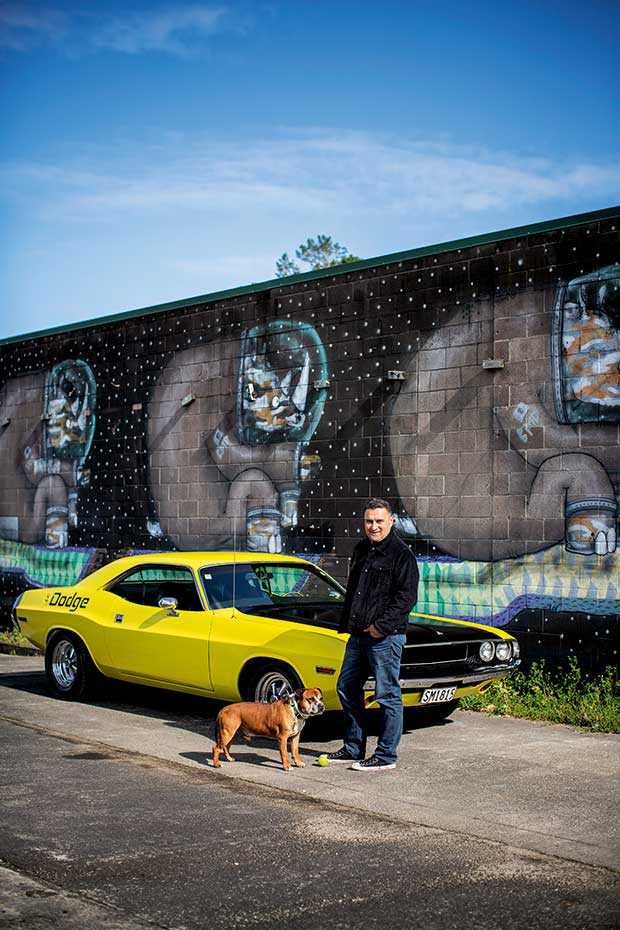 Few muscle cars have more fans than the Dodge Challenger. Gary Covich found one and brought it back to life. But it took more years than he cares to remember.

She would rumble up, all four feet nothing, sitting on a cushion so she could peer over the steering wheel of her boyfriend’s 1967 Shelby Mustang. Then she would scoop up assorted children and off they would go.

It was magic, that car. The boyfriend must have been besotted; little Gary Covich certainly was. He loved his aunt, of course, but the car? Take that love up a notch or two. An American car was rarely seen outside of movies in Aotearoa in the early 1970s; the chance of riding in one was close to zilch. 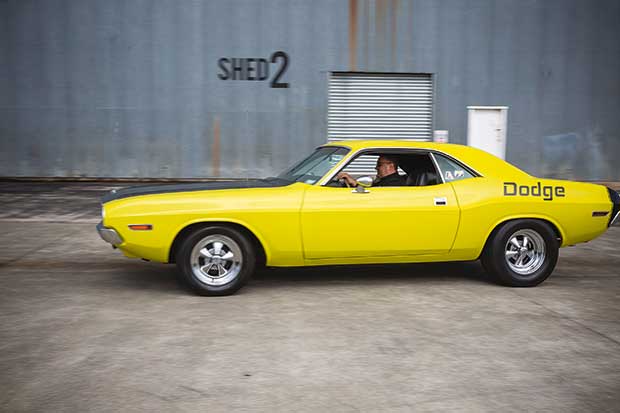 For Gary, no other car could match the Mustang. That was until he saw the car-chase film Vanishing Point and its outrageous Dodge Challenger. But what one wants is not always what one gets, particularly if one first has to grow up and be at least as tall as one’s aunt.

Gary tootled around in his mum’s Honda Accord while he scraped together $200 for an Holden HR Station Wagon. But those American muscle cars were never far from his mind. He looked for a couple of years and, when he was 20, it happened. He got a 1966 Fastback Mustang, one of only a few in Auckland.

It wasn’t a Dodge Challenger, but it was the next best thing.

Then it all crashed around him — not the car, but the economy. The company Gary worked for went belly-up and, out of work, he had to sell his beloved pony car. It was snapped up by musician Margaret Urlich, who took it away to Christchurch with the other Cats. 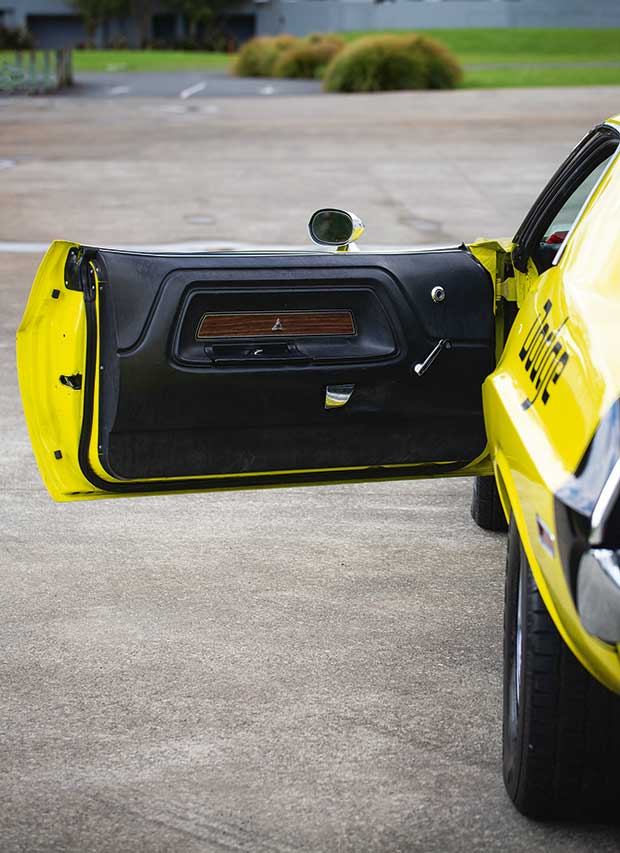 Then there was a frustrating wheel-less period that made even his mum’s Accord look appealing. Another Mustang, newly imported from Hawai’i, showed up. Unfortunately, a friend of his brother’s got to it first; unfortunately, he totalled it. It sat on its owner’s front lawn in its mangled state only a few streets away. Gary couldn’t bear to see it like that, so he bought the wreck to restore it.

More stories you might like:
A grandmother's artistic spirit lives on through a baby blue 1966 Hillman Imp

It wasn’t a Dodge Challenger, but it was the next best thing.

Maybe it was meant to be because while he was finding his way around car restoration, his cousin came across a Challenger in the same state. A Challenger, an actual Dodge Challenger, and because of its sorry condition, at a bargain price. Gary was prepared to buy it sight unseen, but he went and had a peek, which was just as well. So Gary got his Dodge Challenger. It was a big risk because it was unregistered and without a vehicle identification number, or VIN. He wasn’t even sure he would be able to get it on the road, but it was a Dodge Challenger, his dream car.

His friends thought he was crazy. Even his father, who was notorious for bringing home wrecks for restoration, went quiet. It seemed like an impossible project; Gary started to doubt it would get done. He parked it on his mum’s driveway for a year or so. She was terrified it wouldn’t get finished and she’d be stuck with her ghastly driveway ornament.

Public opinion started to annoy Gary. He took the open doubts of his friends and family — and his mother’s aghast neighbours — as a personal challenge and got stuck in. He wasn’t sure he would ever get it on the road but he was confident he could make it track-worthy, which was a start.

It was mostly a shell of a body. The interior looked like it had been eaten by a pack of coyotes, not beyond the bounds of possibility because it had sat for years at a desert storage yard in California. 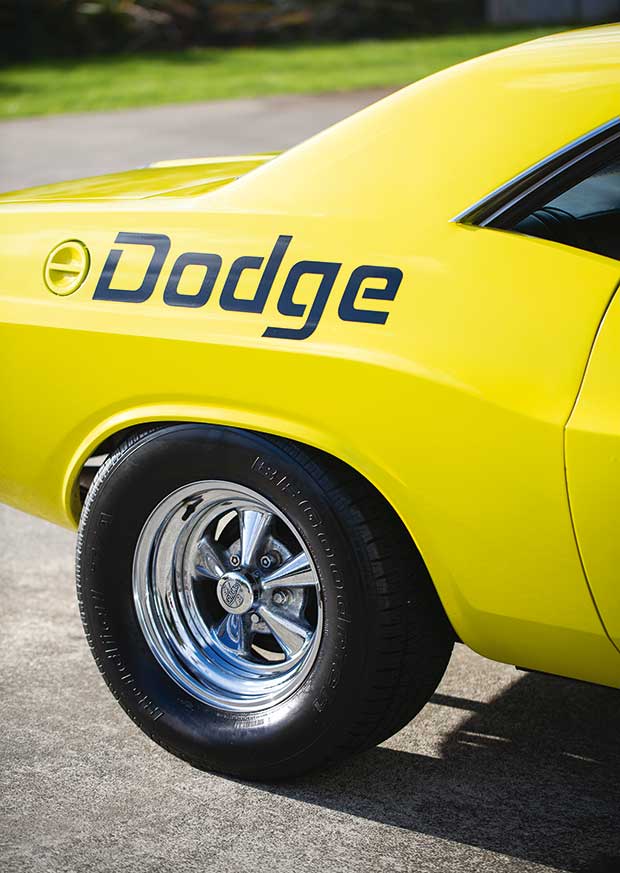 But, amazingly, Gary managed to source most of the parts he needed in New Zealand. He hadn’t expected that, but once people knew what he was looking for, car restorers and specialists kept an eye out.

It took four years to get it roadworthy. Fortunately, Gary had a lot of friends who were mechanics and bodywork professionals, and all he had to do was lug the vehicle around between them. Not particularly mechanically minded, he nevertheless reassembled much of the car on his own, except for pulling apart the engine and transmission; this he left to the experts.

The vehicle’s original colour was dark green, but Gary had a magazine picture of a Trans Am Challenger in a factory spec shade called Curious Yellow. It wasn’t an easy match, but eventually, he found it at Dominion Paint Centre, a small paint shop in Auckland’s Dominion Road.

As if to remind Gary how far he had come on the journey from his mother’s Honda, the almost exact match for Dodge’s Curious Yellow was Honda’s Bitter Lime.

Gary didn’t know it, but the hardest part of the restoration was yet to come. The process of getting a VIN nearly defeated him. More American cars were being imported into New Zealand due to the deregulation of the car industry. But the transport authorities were trying to align left-hand vehicles in a right-hand world. The new rules were open to interpretation and grey. At one point, Gary even looked at shipping the vehicle offshore and back in again, just to fit the current interpretation.

There was consternation among car collectors as they often struggled to comply, and it stopped a lot of people buying or completing such vehicles.

Changes that had to be made included taillights, indicators and seat belts, things that already worked but were now nevertheless considered not compliant. It took nearly as long to become compliant as it did to restore the Challenger.

But they got there in the end — although the fuel gauge has never worked properly, or the air-con. It was frustrating to realize later that many of the new conditions were an inspector’s interpretation of the updated rules, rather than the rules themselves.

More stories you might like:
Meet the foragers turning wild herbs from Central Otago into a wellness business

The Challenger has only let down Gary once — on the evening of the annual trip he and his friends make to the Whangamatā Beach Hop. 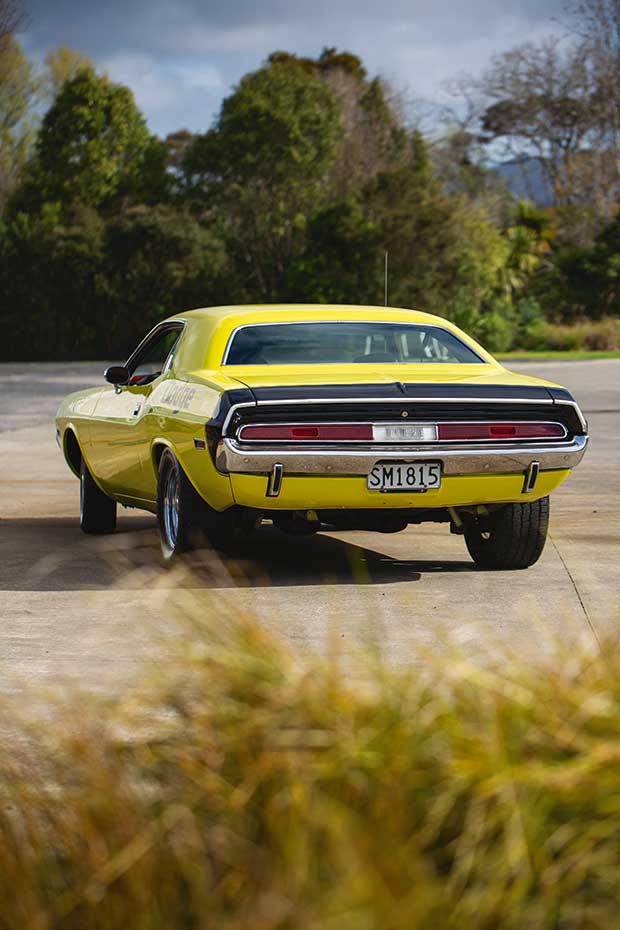 Gary and his car buddy Vince were up until the wee small hours trying to fix an alternator recharging issue. It is the only time the car missed the event in 12 years. But these cars are never finished, he says. He has repainted it once, simply because paint technology has changed for the better and he replaced the vinyl roof, of which he was never a fan.

For a V8, it is quite economical. Tall-geared, fitted with highway gears, it is a nice drive on the open road. Because the gas gauge has never worked reliably, he couldn’t say how many miles he gets to the litre.

Thirty years later, Gary and three generations of staffies have cruised Aotearoa’s highways in the bright yellow Dodge Challenger. Elvis, Stan and currently Cooper have all proudly ridden shotgun. Gary’s not sure if it’s his grinning canine navigators or the yellow paint, but small children, in particular, love his car.

They point from their pushchairs; they smile from the sidewalk. Gary thinks it is because modern cars look much the same, whereas classics stand out.

All that work nearly went up in smoke when he left a water bottle on the passenger seat in the sun. He only returned by chance to find the water had acted like a lens and had scorched a hole into the upholstery.
And another time, his brakes locked during a wet descent of Auckland’s Bullock Track, a steep, narrow road that joins the multi-lane Great North Road.

The car aquaplaned, sliding seemingly inexorably to the intersection. But it drifted to a tidy stop right at the stop sign, exactly where it should have. Unlike the vehicle in Vanishing Point that hurtled to its chosen doom, this Dodge Challenger clearly has other plans.