Gisborne: What to do, where to eat, and where to stay 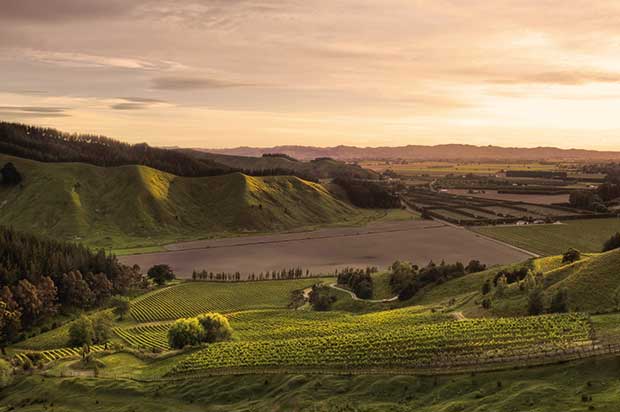 Visitors flock for the sun, sea and surf — the Holy Trinity of Gisborne. But beyond the salty air and year-round good vibes, the soul of Gizzy begs for more in-depth exploration.

There’s something about Gisborne that makes visitors forgetful.

Not in a did-I-leave-the-iron-on? way; this forgetfulness is more oops-I-forgot-to-leave. Perhaps visitors became used to the sand in their shoes, the golden sunrises and the bottomless barrels of excellent wine?

Whatever the reason, this is a place where visitors become locals, and locals become friends. The people of Gisborne reward effort, so look carefully and explore beyond the backbone of the city.

Connect with people and place at the Te Tairāwhiti Arts Festival

It’s easy to forget life before perfectly chilled chardonnay and fluorescent surfboards, to look back to the days when waka lined the Eastland coastline and Māori legends were passed down by word of mouth. Compelling stories are still told, of course, but now by creatives like renowned novelist and Whale Rider author Witi Ihimaera.

Over three weekends in October, Te Tairāwhiti Arts Festival director Tama Waipara will shine a spotlight on the region’s creative powerhouses, illuminating Aotearoa’s iconic landscape and people with more than 70 live events in and around Gisborne.

The inaugural festival includes performing arts, music, kapa haka, visual arts and storytelling — taking visitors into churches, maraes, and even onto the beach. 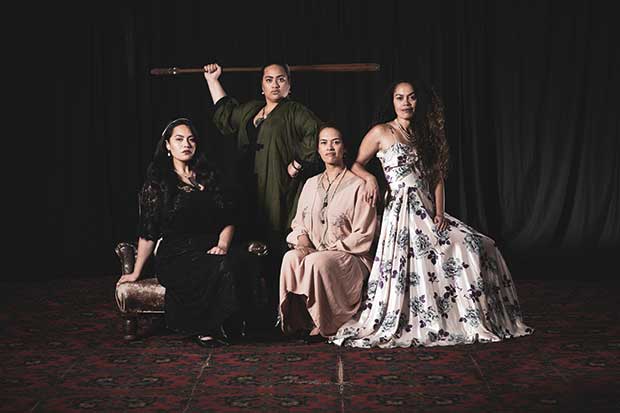 “It’s an opportunity for people to go into places they’ve never seen before,” says Tama, who worked as a programming manager for the Auckland Arts Festival for five years.

“Art-lovers don’t necessarily need to go and sit in a theatre to experience art,” he says, although  there will be plenty of that, too, with performances in Gisborne’s cultural hubs such as the War Memorial Theatre, Lawson Field Theatre, and the grassy beach-adjacent amphitheatre at the Soundshell.

More stories you might like:
A midwinter Matariki road trip: Driving coast to coast from Sumner to Punakaiki in the new Holden Equinox

“I always say that a festival is the art of bringing people together. We’re a platform for connections,” says Tama.

He encourages visitors to connect with local food, culture and picturesque scenery while in the region, because, above all, the festival is about what it means to be of Tairāwhiti.

4 to 20 October, venues in and around Gisborne and Tairāwhiti, tickets at tetairawhitiartsfestival.nz

It might be one of the smallest kitchens in the country but the team at Neighbourhood Pizzeria have pizza creation down to an impressive dance. They twist and twirl around each other, punching dough, dicing vegetables, building boxes, scooping pizzas and taking orders — and all from the inside of a converted shipping container.

“There was nothing good about pizza in Gisborne, so I thought we had better vibe it up. We set up the shipping container on a patch of grass, and the locals loved it so much that we had to extend,” says the pizza maestro. Expect a queue from opening at 4.30pm to close at 8.30pm — this is the place to stop after a long day’s work, if the kids are calling for takeaways or if the kitchen isn’t the place to be.

The specials change weekly and showcase the best produce from neighbours such as the butcher next door or Waimata Cheese. Don’t miss it.

Appreciate the flora at Eastwoodhill Arboretum

Douglas Cook, the visionary behind Eastwoodhill Arboretum, was once romantically described by a writer as a “plantsman with the soul of a poet and the vision of a philosopher”.

It was that vision which turned a 131-hectare farm into Eastwoodhill, the National Arboretum of New Zealand and the biggest collection of northern hemisphere trees in the southern hemisphere. 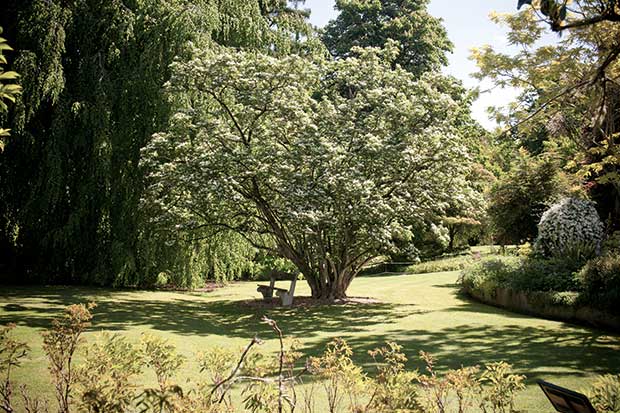 Inspired by the gardens of England, where he spent time recuperating from a World War I injury, Douglas dedicated his life to the creation of Eastwoodhill, which now has more than 25,000 varieties of flora and fauna and five stars from the New Zealand Garden Trust.

There are 25 kilometres of walking trails for all abilities, a playground for all ages and accommodation for those wishing for more time to explore. Book ahead for guided tours. Fun fact: Douglas was also the founder of the rhododendron garden, Pukeiti, on the slopes of Mt Taranaki.

There are plenty of animals tourists may expect to pat during a visit to New Zealand: lambs, horses, maybe the odd deer or emu, an alpaca or two — but stingrays? Not at the top of the list.

Thanks to the demise of a well-known hunter of crocodiles, stingrays are often seen as scary shadows beneath the surface. But the folks from Dive Tatapouri are here in their waders and ready to change that way of thinking — friendly animals bumping against the legs of initially nervous guests quickly dispel any negative preconceptions.

Commercial fisher Dean Savage and his wife Chris are used to visitors returning wet and happy.

“People are always blown away by the rays. They can’t believe how cool they are, how graceful and beautiful,” says Chris. 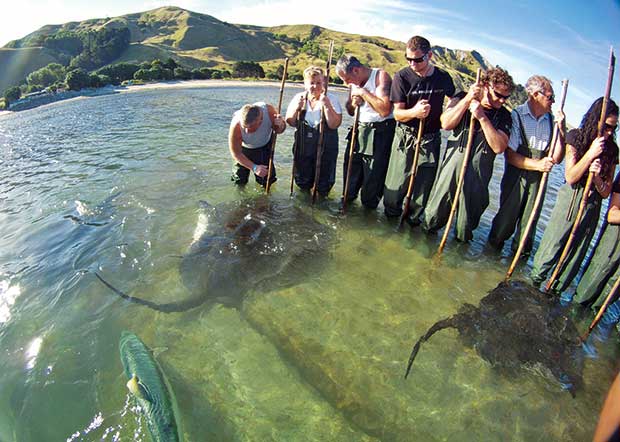 There are a couple of ways to best experience the rays and their marine friends; wander onto the reef in provided waders or venture beneath the waters to snorkel alongside the eagle and short-tailed rays.

Dive Tatapouri is located in perhaps the best spot on the coast; guests can relax on the deck overlooking the bay and take in the sunset and watch resident ray Amanda splashing in the shallows.

The tours are dependent on weather, sea and tide, so book in advance and phone ahead if unsure of the conditions. Winter tours are by appointment only.

The Gisborne lifestyle tempted Barry and Ros Thomas, originally from Auckland, to move to Gisborne. They had a (simple) grand plan: run a small B&B from their two-storeyed Inner Kaiti Californian bungalow with time to pop out for a surf and maybe the odd fishing trip. 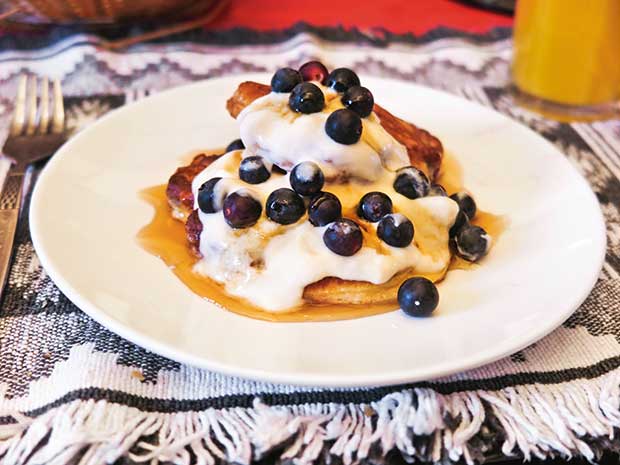 Things haven’t worked out quite as expected, and it can all be traced back to Barry’s cooking. He thinks it was the croissants that ended his retirement — as word of his pastry skills spread, bookings for Surf City Lodge began flooding in.

Are croissants part of a genius marketing strategy? After all, Barry was once a marketing and sales lecturer at AUT— one of many roles during his varied career.

There are four rooms to choose from at Surf City Lodge and breakfast is not only included, but is a highlight of the stay. 139 Rutene Road, Inner Kaiti, (06) 868 3900, surfcitylodge.co.nz