The Uros Islands of Perú: Explore the colourful floating village made of reeds in Lake Titicaca 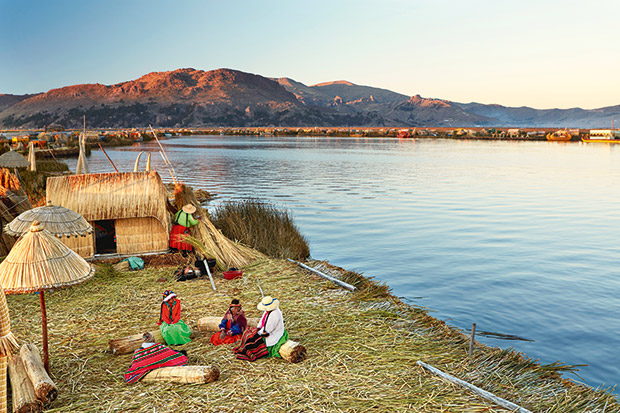 Lake Titicaca’s floating islands are constructed by the Uros from totora reeds, giant bulrushes that grow in the lake shallows. Photograph: © Belmond.

The humble reed is the foundation of life for people who live on floating islands on Lake Titicaca high in the Andes.

There to meet them, smiles as vibrant as their kaleidoscopically coloured costumes, are the locals. The Uros women are resplendent in full skirts, blouses and embroidered waistcoats in green, orange, red, blue, pink and purple; the men in multi-coloured hats, with earflaps and tassels. 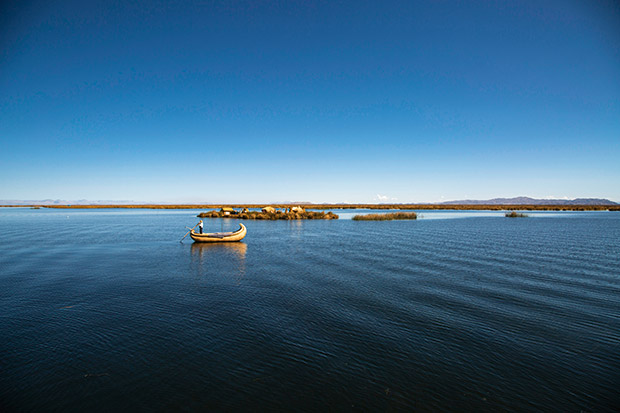 There are about 120 man-made floating islands on Lake Titicaca. The islands’ original purpose was for defence. If there was risk of invasion, they could be detached from their anchors in the lake and moved from harm. Photograph: © Quasar Expeditions.

Even the women’s hair is decorated, their long braids plaited with bright pompoms to indicate marital status.

It’s a sunny mid-winter day on Suma Wiljta, one of the Floating Islands of the Uros (or Uru), a cluster of islands 30 minutes’ boat ride from the port of Puno. The ground moves gently underfoot. 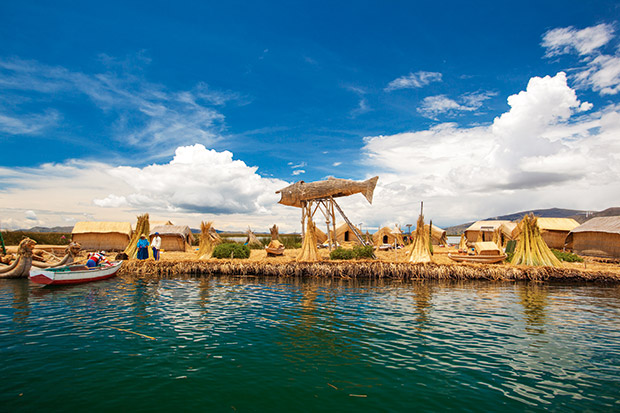 Large chunks of the reeds, harvested using long saws, are lashed together to form the base of each island, about two metres thick. The dense roots grow together creating the “khili” on which multiple layers of reeds are layered in a crisscross pattern to provide a soft, dry surface. Photograph: © Alex Bryce/PromPeru.

Is the motion due to the dizzying effects of being at high altitude, or is the earth really swaying? Probably both.

At 3812 metres, we are 88 metres higher than New Zealand’s tallest mountain, Aoraki-Mount Cook, so altitude symptoms would not be out of the question. But the islands, made by the Uros from totora, a reed growing in the lake’s shallows, are actually undulating. The islanders prepare to entertain visitors with traditional song and dance. The islands are among Perú’s most popular tourist attractions, with some offering overnight stays. © Justine Tyerman.

But, more on that later. The visit is an excursion on the luxury Belmond Andean Explorer Great Train Journey from Arequipa to Cusco. The itinerary takes in parts of the ancient Inca Empire with Lake Titicaca, straddling the border of Perú and Bolivia, about halfway across the Altiplano – the world’s second-highest plateau, after Tibet’s.

Titicaca is the world’s highest navigable lake and, at 8562 square kilometres, South America’s largest. Twenty-five rivers and many glaciers flow into it, but only the Desaguadero River flows from Lake Titicaca.

This is the birthplace of the Incas. According to legend, the first Inca king, Manco Capac, was born here. He was drawn from the depths of the lake by Inti, the Inca sun god. 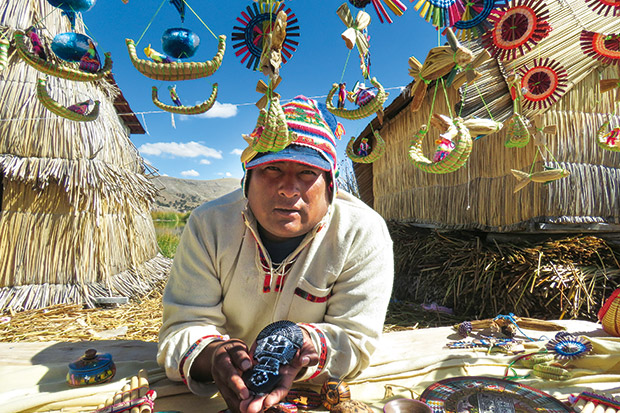 Islander Ruben makes mobiles and toys from totora reeds and gourds to sell to visitors. He, his wife Amalia, and their children Katherin and Juan, live in a neat one-room home entirely constructed from reeds. © Justine Tyerman.

The Uros people are descendants of the original Altiplano settlers who predate both the Aymara people, with
whom they intermarried and whose language they adopted, and the Inca by several thousand years.

Rather than submit to the Inca, who arrived in the 15th century, the Uros elected to live apart and set about creating a home on the lake. About 1500 of the 2700 Uros people in Puno still live on small floating islands on the lake. Cooking is performed outside in pots on open fires, with the surrounding reeds kept damp. The family’s diet consists of fish and birds, which they hunt and trap. Totora roots are a rich source of iodine and are also used medicinally. © Justine Tyerman.

It’s no mean feat constructing not just a house but also the land the home sits on. The process is demonstrated by the men of Suma Wiljta, who show tourists exactly how labour-intensive it is. The base for the island is cut from the roots of the tall totora reeds, which grow around the lakeshore.

Large blocks of totora are tied together with ropes and anchored with posts driven into the lakebed to stop them from drifting away. After a couple of months, the roots have grown together, and layers of reeds are crisscrossed on top of the base until a dry platform several metres thick has been created. 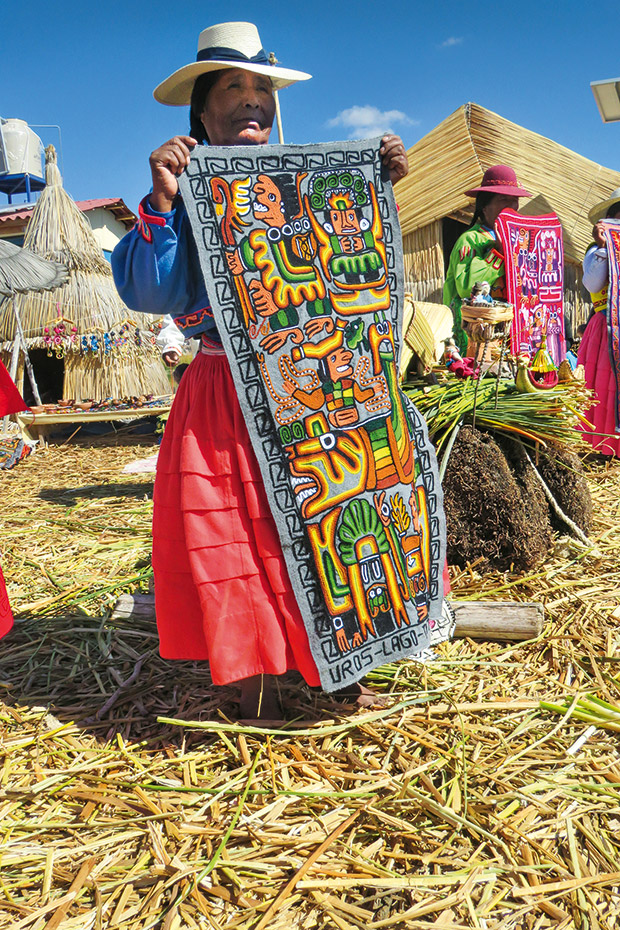 It takes approximately a year to build an island, which then lasts 25 to 30 years. There are about 120 floating islands, each inhabited by five to 10 families who work together to build their dwellings and catch fish and
birds to eat.

Cooking takes place outside the house, and great care is taken with fire pits, which are set on rock slabs. The surrounding reeds are kept damp. 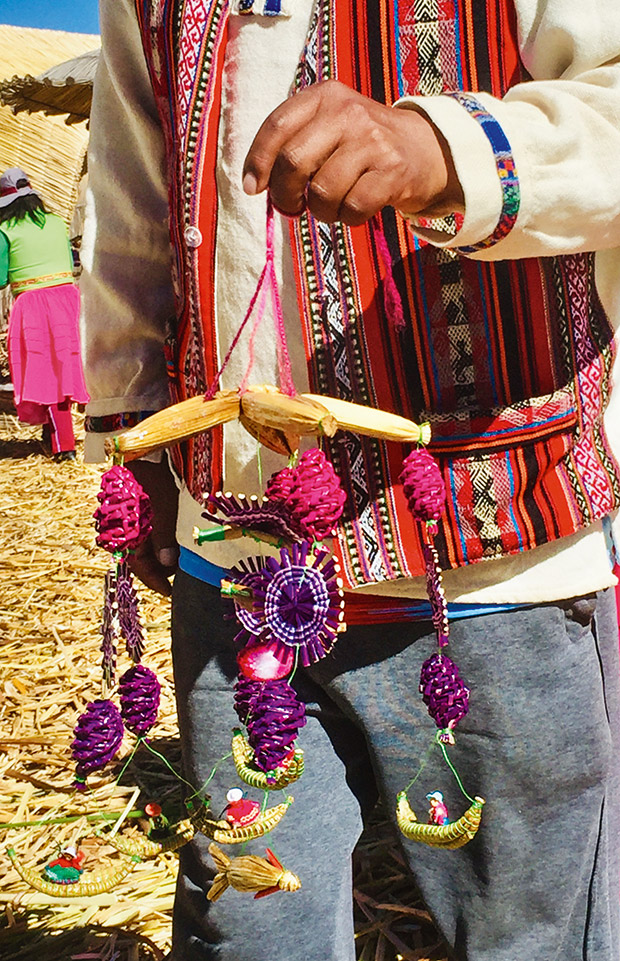 The Uros community elects a new president, male or female, every year, and a mayor and councillors every three years. These “officials” take care of all aspects of life. “If anyone misbehaves, the piece of island on which they live is cut adrift and banished to Bolivia,” said our local guide José.

Then he winked. “But people don’t misbehave, and there’s no need for police on the islands.”

On a larger island nearby is a kindergarten and elementary school, while free healthcare and secondary and tertiary education facilities are on the mainland. In recent years, tourism has become the principal income for the Uros, and some islands have lodges where guests can stay overnight. An Uros woman steers her banana-shaped reed boat or “balsa” with a long pole. The boats often feature animal heads at the prow like this “puma”. © Alex Bryce/PromPeru.

The Suma Wiljta islanders are used to entertaining visitors, performing joyful songs and dances in the Aymara language and displaying their exquisite craftwork in embroidered blankets, cushion covers, and tapestries depicting scenes from their daily lives. The men make intricate hanging mobiles, toys and ornaments from reeds and gourds.

The one-room reed home belonging to Ruben and Amalia and their children Katherin and Juan is neat and shows the simplicity of their lives. They are happy to be living on their floating island – except in stormy and windy conditions when there is a risk of the island breaking loose and drifting away. 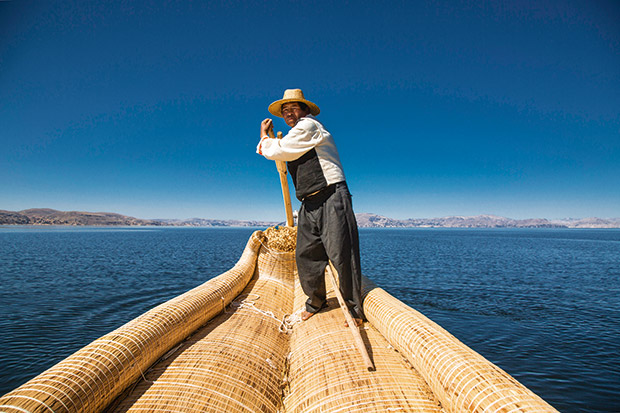 An Uros man manoeuvres his reed boat on the calm waters of Lake Titicaca. The Uros bundle together reeds to make their traditional banana-shaped boats or “balsas” – some are small craft while others are substantial vessels used to ferry tourists. Photograph: © Quasar Expeditions.

It would indeed be strange for them to live on terra firma after a lifetime of this soft, springy carpet swaying underfoot.

The writer flew Latam Airlines from Auckland to Santiago, Chile, and then on to Lima and Arequipa. Latam Airlines isthe leading carrier to and from South America with the largest network and connectivity throughout the region.

There are four direct flights a week from Auckland to Santiago, Chile, the gateway to South America, with onward connections to 124 destinations in South America.

In Cusco, another Great Train Journey, the luxury Belmond Hiram Bingham travels to Aguas Calientes at the foot of Machu Picchu Mountain, the site of the legendary citadel of the Incas.

Launched in 2017 as South America’s first luxury sleeper, this Great Train Journey has taken train travel to new heights, traversing the Andes Plains, one of the world’s highest train routes. 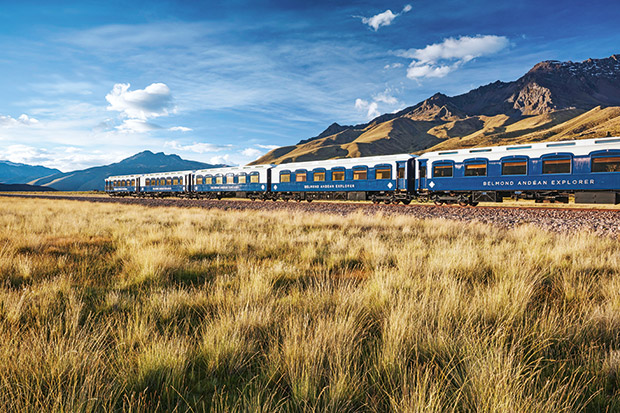