It’s all good craic in Belfast 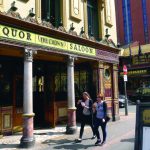 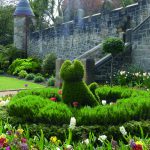 Belfast Castle and the dedicated cat gardens overlook the city 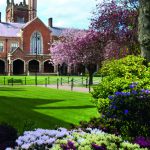 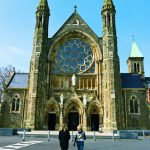 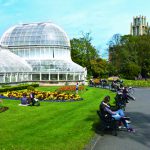 The Botanic Gardens blossom with locals on a warm spring day 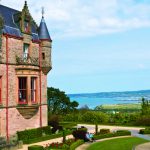 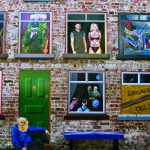 Commercial Court was once Belfast’s industrial hub, but is now the heart of all things loud, from live music both inside and outside the Duke of York, to the murals on the surrounding walls. 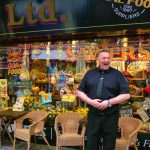 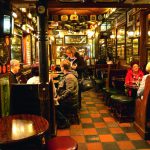 The Duke of York pub 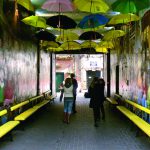 The best murals in the court are found by wandering under the umbrellas. 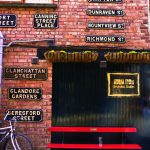 Commercial Court’s The history is quirky; local band Snow Patrol played their first gig at the Duke of York and there was once a cock-fighting ring at one end of the lane.

It sounds like the beginning of a bad joke, but what do Game of Thrones, a jigging Irishman and Bill Clinton have in common? Belfast.

This story won the Tourism Ireland Award for Best Travel Story about Britain and/or Ireland in the Travcom Travel Communication awards.

From the way he deftly bounced from side to side, pointing his well-polished leather shoes and leaping from the balls of his feet, it was clear that this wasn’t the first time he’d jigged in a business suit. As the Irish band tucked in the corner of the Duke of York played their fiddles with increasing determination, the man flew across the floor with the flair of Michael Flatley; feet moving at dizzying speeds, arms flaying towards the puffing, pink-cheeked, pink-tutu-ed, bachelorette-party-attending tourist who dared challenge him on the dance floor. She’d expected an easy battle, her tutu less restrictive to dancing than a tailored business suit. But she was sorely mistaken. Even at 2am, still in the conservative uniform of the office worker, it’s hard to keep a Belfastian down. Students from Queens University share the love in the Botanic Gardens.

“It’s all good craic,” guide Dee Morgan explains, hearing of the early-morning spectacle. “And there’s nothing the Northern Irish love more than good craic.” (Craic = good, old-fashioned fun and banter.) This visit to Belfast coincided with one of the first sunny summer days of the year so, from all directions, locals spilled into the streets holding glasses of beer and leaving the city’s employers scratching their heads at the empty offices. Glossy tulips in the botanic gardens raised their green arms, craving the warmth of the unexpected sun and layers of clothing were quickly discarded by university students desperate to bare pale limbs to the rays. Cherry blossom petals drifted like rain in the breeze, coming to rest in the ponytails of those handing out hugs.

Wait… Belfast? It’s true. There are few cities in the world to have undergone a transformation quite like Belfast; there are few cities to have seen trouble quite like Belfast. For 30 years, from 1969 to 1998, it was the centre of The Troubles, the political/civil unrest that divided the city. The conflict between the Unionists/Loyalists/mainly Protestants and the Nationalists/Republican/mainly Catholics claimed over 3600 lives and tore apart the city. But, says Dee, who grew up with the sound of helicopters and gunfire, Belfast may be scarred but they are scars of the past. Now, the focus is on looking ahead and catching up on the 30 years of tourism and development that bypassed the city. “We own our history, but we move forward. Look where we are now, we’ve come so far.” Even so, she won’t linger long in the section dedicated to The Troubles at the Ulster Museum.

It’s hard to imagine anyone more “Belfast” than Dee. She’d picked us up with her custom-made sword in the back seat, which was quickly slung over her shoulder and biffed between suitcases to stop our small group from meeting a very Game of Thrones-esque end should she hit the brakes quickly.

Dee’s a fan of the violent fantasy TV show (hence the sword), which is filmed both around Belfast and in the Titanic studios down in the Titanic Quarter – also home to, unsurprisingly, Titanic Belfast, an enormous iceberg-shaped museum that tells the tale of Belfast’s most-famous doomed export. Despite the cities dark undertones (gory TV cliff-hangers, uprisings and sinkings, oh my), the locals have a love of naughty nicknames: the sculpture The Beacon of Hope is also ‘Nuala with the Hula’ or ‘The Thing with the Ring’; the impressive Spire of Hope is the ‘Rod to God’, and Dee’s former local priest is Father WhataWaste.

More stories you might like:
From New York to Kaikōura: Poet Amy Leigh Wicks on love, marriage and earthquakes This is a city of colour and a city that uses colour to tell its stories. Throughout, walls and buildings have been carefully decorated with huge murals, the paint strokes writing their history on stone and concrete. In Falls Road (Nationalist) and the Shankill Road (Unionist), where neighbouring suburbs are separated by barely a physical kilometre yet by a million kilometres of deep-seated religious differences, the storey-high Peace Walls of stone, brick and steel, topped with yards of barbed wire and spikes, dwarf everything human.

There seems no reason to talk too much; the paintings covering the walls say it all. The perspective depends on the allegiance of the suburb, but everything from hunger-striker Bobby Sands to the Cuban Revolution and the Great Famine are covered. Some are confronting, others poignant. Apart from one paint-bombed controversial subject, most are graffiti-free; there’s a respect for the works that runs deeper than brick. Dee explains that putting a mural on the wall was a way of getting a voice across. “Eventually these walls will come down [plans are by 2023] but the walls in the mind need to go first.”

They’ve seen things, these painted walls. Three of the most influential men in recent history have left their mark here, signing the wall in a show of unity. Bill Clinton, the Dalai Lama and… Justin Bieber (a debatable point). Every day tourists in black cabs enter West Belfast, observing from afar, trying hard to imagine what was. But what was isn’t as important as what is. Yes, there are walls. There are too many memorials for a city this size. There’s the Sunflower pub in Union Street with a cage over the entrance where patrons were searched for weapons. But next to the bar is a sign that says, ‘No topless bathing: Ulster has suffered enough’ and – suddenly – there’s that Belfast craic again. 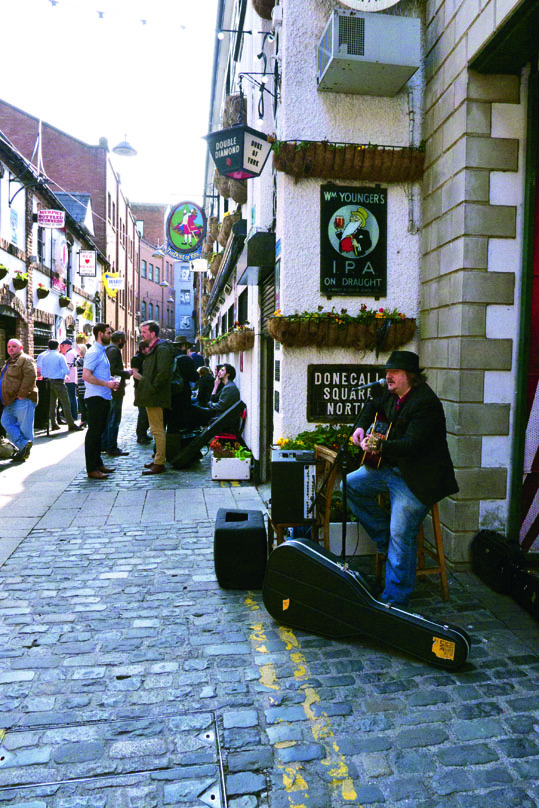 Live music in the sunny lane of Commercial Court

NOTEBOOK:
How to get there: Emirates flies daily to Dublin from New Zealand via its Dubai hub, and an express coach connection is available from Dublin airport to Belfast. Alternatively Emirates’ daily services to London’s Heathrow provide connections to Belfast.

Where to eat and drink: Don’t miss the Crown Liquor Saloon, once a famous gin palace and now a tourist favourite. For a pre-dinner drink and people watching, The Dirty Onion, and for post-dinner drinks and even better people watching, The Duke of York. For endless lunch options and a spot of shopping, visit St George’s Market – there’s a Game of Thrones burger for those with a murderous appetite. Lovers of steak won’t be able to go past Deane’s Meat Locker or for local ingredients cooked to perfection, pop into Hadskis in the Cathedral Quarter. 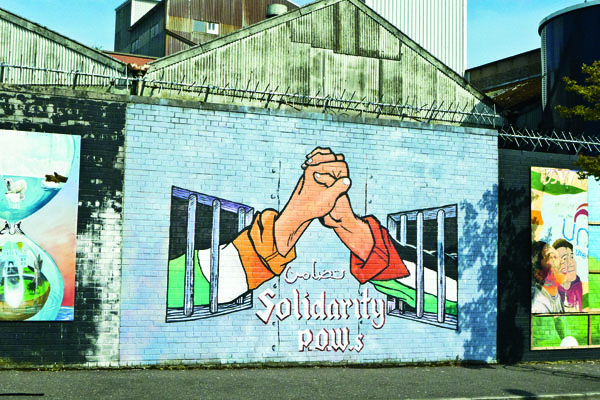 The gift of the guide: Dee Morgan seems to know everyone, everything and everywhere of interest in Belfast. Get in touch with her at deetoursireland.com.

Don’t miss: Titanic Belfast is both brilliant and sombre, taking visitors from the heights of the shipyard to the depths of the North Atlantic Ocean. Visit the mummy, Takabuti, at Ulster Museum, then wander through the neighbouring Botanic Gardens and Queen’s University. Belfast Castle offers views over the city and a garden dedicated to and decorated with cats. No visit to Belfast is complete without a visit to Sawers (established 1897), the mouth-watering deli in the Fountain Centre. Their sweet chilli jam is a winner – load up a suitcase.

Where to stay: MalMaison Belfast is located right in the middle of Belfast, walking distance from both the shopping centre and the Cathedral Quarter. In a renovated warehouse and inspired by the Titanic, it’s trendy indeed.

Four amazing museums to visit in Ireland and the United Kingdom