Each decade of their life together has taken a New Plymouth couple a step closer to the way they dreamed of living. This is another beginning of an end and an end of a beginning.

The number 10 and Harvey Dunlop seem inevitably entangled. All through Harvey’s adult life, each decade has brought changes. The most recent has been spent saving a building from the past and constructing a new building for the future.

Harvey and Kaye Dunlop’s New Plymouth story started in the country and currently rests where the Tasman Sea tumbles onto the foreshore. They can sit on the edge of the sundeck of their new home and almost dangle their toes in the water. This is another beginning of an end and an end of a beginning of some notable decades in the couple’s lives that have been intertwined since they first met 40 years ago growing up in South Taranaki. 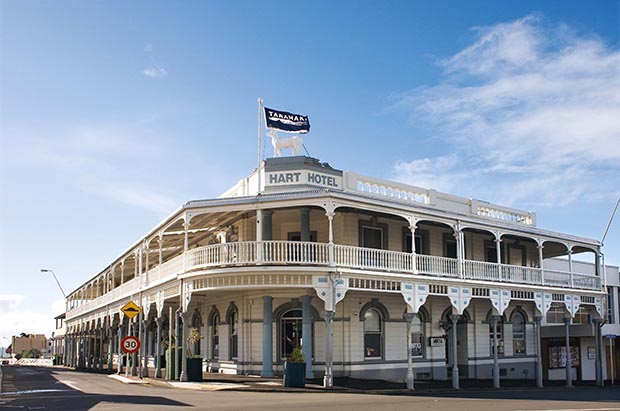 A 125-year-old New Plymouth icon has been preserved for another century, thanks to co-owners Harvey Dunlop and Jeremy Thomson.

Following high school, Harvey set off from the family farm to Lincoln University in Canterbury to complete an agricultural commerce degree before returning to live in New Plymouth. He took up a role as a farm appraiser with the Rural Bank where he learned about the investment side of agribusiness and observed the independent lifestyles enjoyed by farm owners.

But he was still two decades away from achieving his own financial and lifestyle independence when he left the Rural Bank to assist his father and his business partner. They were redeveloping a large accommodation complex that was surplus to the vendors’ requirements following the “think big” government-funded energy projects of the early 1980s. 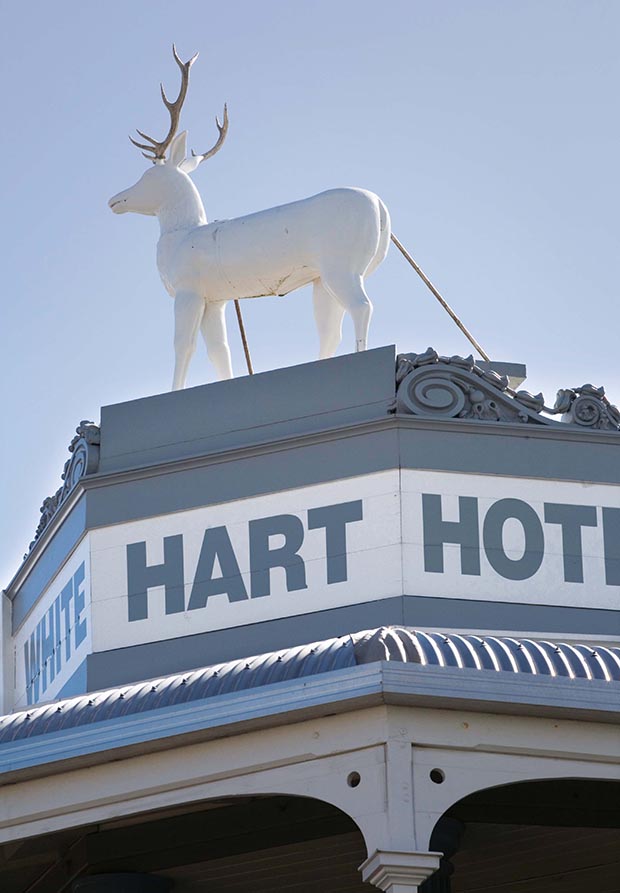 The White Hart was the destination for the first horse-drawn Cobb & Co coach to arrive from Whanganui. On board were New Zealand premier Sir William Fox accompanied by Taranaki Maori chief Hone Pihama.

It was a bad time to develop a new hotel business. They were faced with high levels of debt at interest rates of up to 30 percent combined with depressed asset values following the share and property market collapses of the mid-1980s. This meant new survival skills needed to be honed along with learning about business partnerships.

The value of combining complementary skills and experience and sharing the risk was not lost on Harvey. Perseverance and an improving economy enabled the business to thrive but 10 years had elapsed and it was time for him to move on. The Queen Anne stick veranda was an early-1900s’ addition and the statue of the white hart was added about the same time.

He was asked to establish ASB Bank’s New Plymouth rural banking division but Harvey hadn’t forgotten the attraction of property investment and his goal of owning his own business. Clarity for the vision came from American entrepreneur Robert Kiyosaki through his Rich Dad Poor Dad series of books which described what the author referred to as the Cash Flow Quadrant.

The plan was to move out of the left-hand segments of the quadrant, represented by employees and the self-employed, into the right-hand side which was all about owning a business or an investment where passive income could be earned. 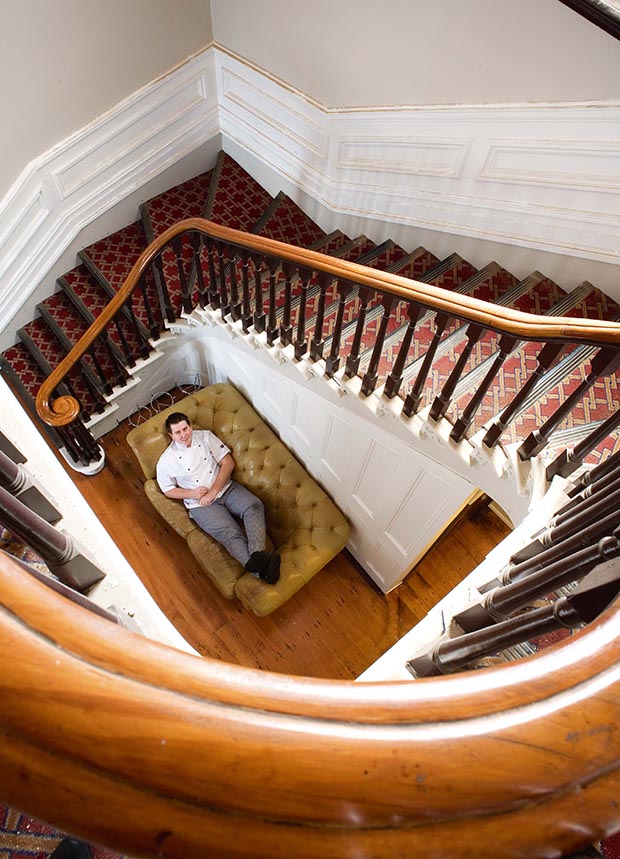 Chef Tomasz Zielinski in the entrance foyer and stairway.

The opportunity came in 2002 when Harvey joined forces with Jeremy Thomson to acquire the White Hart Hotel, a neglected beauty in what was then a depressed downtown area. At the time, Harvey’s dad thought the White Hart was a lovely building; Jeremy thought it had great potential.

Harvey’s first thought when he saw it was “why would you?” But they did and it didn’t take long for him to see that under its battered face the White Hart had charm, although it would take almost another 10 years to reveal its hidden treasures.

The same year that the White Hart was acquired, Harvey and Kaye purchased a beach-front 1920s’ bungalow with a detached granny flat. The main house was sold for removal while the flat became the Dunlops’ city beach pad. Snug co-owner Gina Bryant next to the cocktail bar’s original fireplace. The red theme has been retained here from an earlier time when the popular Red Room lounge bar was created with the assistance of local artist the late Don Driver, a regular visitor. On the far wall hang pre-restoration images of the White Hart captured by artist Terry Urbahn who also produced a documentary recording the conversations of hotel characters dining in the old public bar.

With the children – Jane, Blake and Elle – starting to leave the nest, the lifestyle block they had grown up on was relegated to second place in favour of the coast. Kaye managed her teaching job so she could spend time reconnecting with the sea she had always loved. Bedrooms were set up in the garage during the summer when the kids, now at university, returned.

Meanwhile the White Hart continued to languish as Harvey and Jeremy looked at various ideas – considered this, discarded that, wondered if… nothing seemed to quite fall into place. What they did discover was that the White Hart was much loved by the community. A previous battle to save another historic building, the Arcadia Hotel, had been lost for the sake of a car park so there was a justifiable fear that the White Hart, too, was doomed. It was a big responsibility and not a little frightening. Its heritage status was recognized by the New Zealand Historic Places Trust which had registered the original 1886 building under its highest classification. The local council also took an interest, giving it a Category A listing under its district plan.

A conservation plan provided an understanding of the building’s cultural, heritage and social values, but not a solution. A subsequent engineering report was sobering, warning that “…unless urgent remedial work was undertaken the deterioration would accelerate and the building would be lost to New Plymouth”. 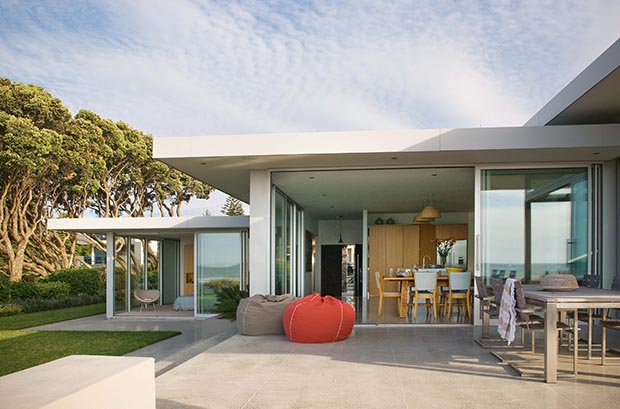 The Dunlop’s new house is made up of three pavilions cascading across the site, providing panoramic coastal views. The low-level structure and perimeter planting ensure privacy from the busy walkway which is right on their boundary.

With mounting pressure from an expectant public but with no clear final use for the building, the prospect of outlaying the report’s estimated cost of up to $3.5 million for preserving and upgrading was daunting. Then the global financial crisis hit and all plans were put on hold.

In accordance with his goal of financial independence by the time he was 50, exactly a week before his 50th birthday and 10 years after starting with ASB Rural, Harvey made the move from employee to business owner and property investor. He could now focus on managing a growing portfolio of New Plymouth commercial properties. 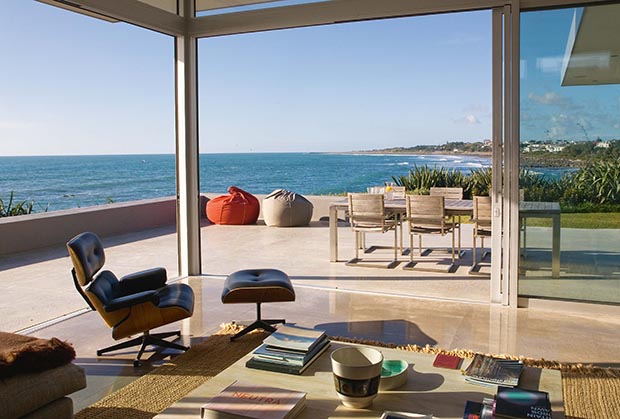 Slowly, as the decade advanced, the White Hart’s stars began to align. In 2010 architectural firm Atelierworkshop developed plans so that the heart of the old hotel could regain its slow, steady thump. There was a steady thumping going on down on the foreshore as well with tradespeople building Harvey and Kaye’s new home.

The little flat had gone and in its place was emerging a long, low, sleek structure that suited its coastal setting so well it could have been washed up from the beach. Friend Mike Mansfield came up with a design that incorporated a natural palette of local stone, unpainted cedar and large panes of glass under a series of floating roofs that stepped down the site. 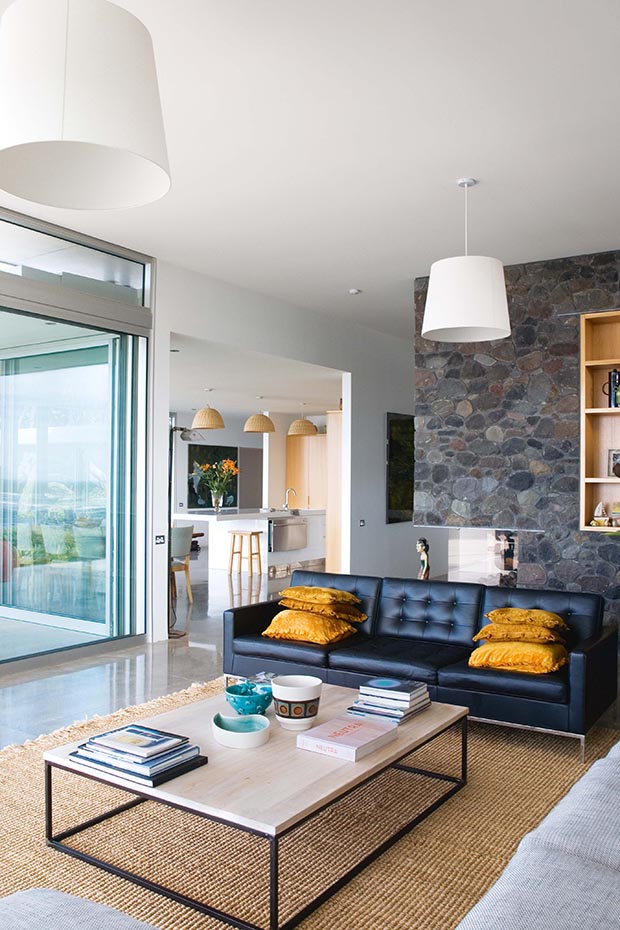 As Kaye and Harvey settled into their new coastal habitat, an old building was coming back to life in the CBD. Funding was in place, detailed plans were approved and local construction firm Street & Cook began the preservation and restoration of the White Hart. Just before New Plymouth hosted its first World Rugby Cup game in 2011, the Snug cocktail lounge bar was opened in the former Red Room which had not seen public patronage for – yes, 10 years. 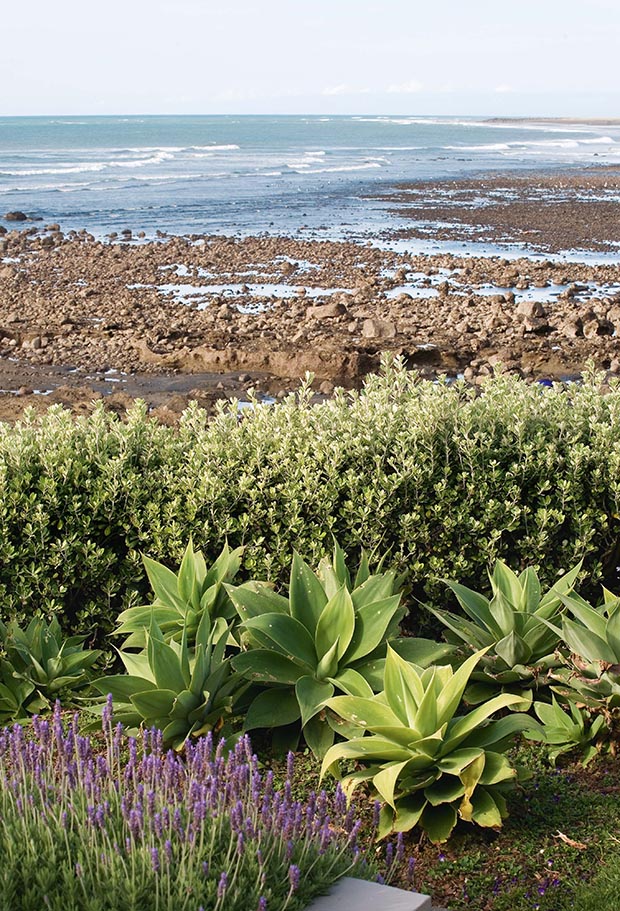 THE WHITE HART
– The hotel was built in 1886 to replace a house that had stood on the site since 1844. During its life the house also served as a refuge for derelicts, as temporary accommodation for early settlers and as a hospital for soldiers during the New Zealand Wars.
– New Plymouth architect James Sanderson designed the present timber Italianate-style building which was extended in 1900 to a design by local architect Frank Messenger.
– The distinctive balconies and statue of the white hart above the corner parapet were added in 1909.
– During the 1970s the White Hart became known as a venue for Taranaki’s rock and punk music scenes and was also home to the Magog Motorcycle Club.
– In spite of being registered as a Category 1 Historic Place, the building fell into disrepair until rescued by Harvey Dunlop and Jeremy Thomson.
– The Snug lounge opened in 2011 and plans are underway to develop a cinema as well as office and retail spaces. HARVEY’S TOP 10 TIPS
1. The three Ps to success: passion, purpose, people.
2. Make full use of technology but remember that face-to-face is still the best means of communication.
3. Create passive investments while you are an employee until you no longer need to be one.
4. Give back to the community what it has given to you.
5. Simplify your life by doing the things that enrich you and discarding the things that don’t.
6. Your professional advisors are your friends.
7. Have a go before you reach 30 (that’s my father’s advice – to make the move before you become too risk averse).
8. The best things in life don’t cost money but time, so spend it well.
9. Life partnerships can be much more successful and rewarding than individual ones.
10. A close neighbour is better than a distant friend (a saying from our Dutch neighbours). 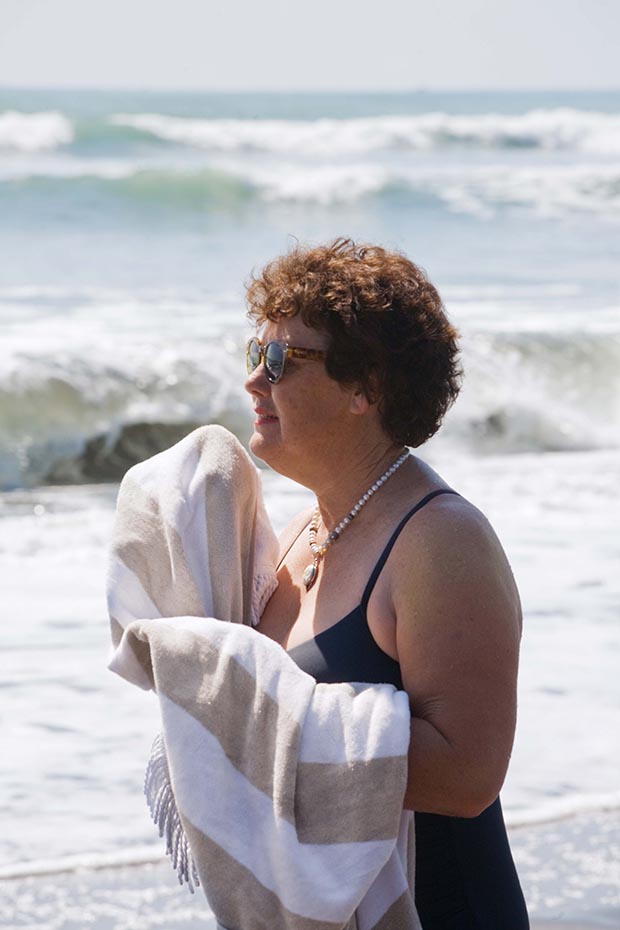 BY THE SEASIDE
Kaye loves everything about the seaside: swimming, fishing from their boat or just strolling along the beach. She doesn’t care if it’s calm or stormy; she swims whenever possible, year round. It is her way to start the day. New Plymouth’s 11-kilometre coastal walkway passes the house and is a major part of the Dunlops’ daily lives.

They walk or cycle along it to nearby cafés, it leads Kaye to town and Harvey to his office, it takes them both to the weekend farmers’ market. At night she and Harvey sit on the deck and watch the passing parade of cyclists, runners, walkers and lovers. They bask in the sunsets and watch the ships’ lights in the darkness. There is never a day goes by, Kaye says, that she does not feel anything but blessed.

The Dunlops make the most of their coastal lifestyle, swimming in the bay, boating at Port Taranaki, making daily excursions on the coastal walkway or over the Te Henui River to the inland walkway and watching the world go by from their deck. The uncomplicated house is designed with spaces that flow into each other. The Nigel Brown painting Skyline Garage is a reminder of the bach where Kaye and Harvey lived before building the house.