Glamping at Wainamu: Jim and Anna Wheeler on transforming the camping experience An open ante-room is supported by tall, straight poles that Jim cut from the bush then dried, stained, polished and roped to riveted canvas.

Camping at Wainamu does not mean roughing it under canvas. Multi-roomed tents with real furniture make communing with nature a very smooth operation.

A friend who’d been flying people to safari lodges in Botswana gave Jim and Anna Wheeler the idea. “It was his description of what was happening in Africa, where you can’t build a hotel but you can put up tents, provided they can be taken down in 24 hours,” says Jim. “I thought, ‘why don’t we build luxury safari tents? That way we’ll comply with our Heritage Park status and New Zealanders will love them.’” 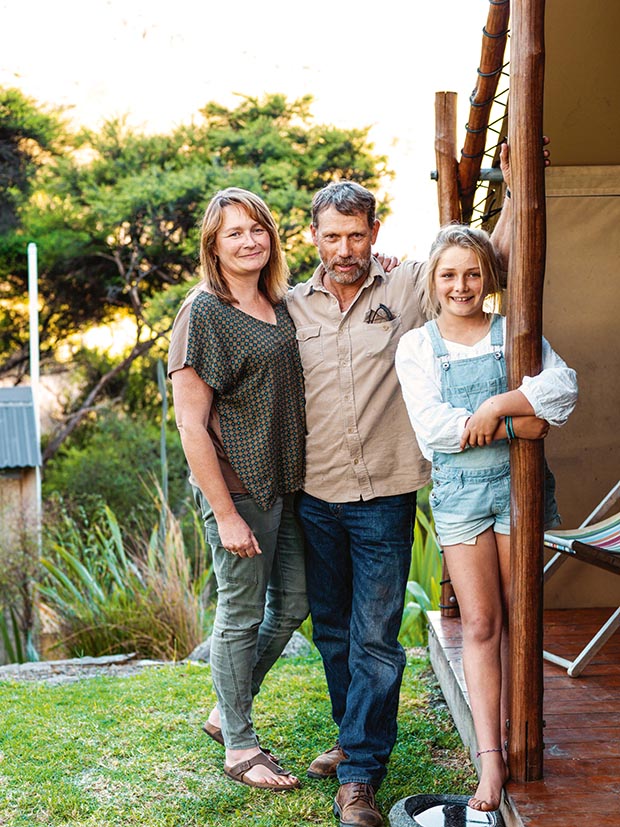 They have the perfect spot for it. Bethells Beach, Te Henga, 45 minutes out of the city on Auckland’s wild west coast, is a wilderness paradise bordered by glittering black sand hills, rivers, hidden lakes and a mighty surf beach. Settled by Jim’s great-grandfather Pa Bethell back in the 1880s, it is not just home for the family; it runs in their blood.

“From that time to this we’ve loved this place,” says Jim. Anna, who has lived here for 20 years – a mere blink by Wheeler standards – can’t imagine leaving. Their children, Johnny, 16, and Miriama (Mim), 11, are sixth-generation west coasters who run barefoot on the sand winter and summer and have learned to swim and surf here. 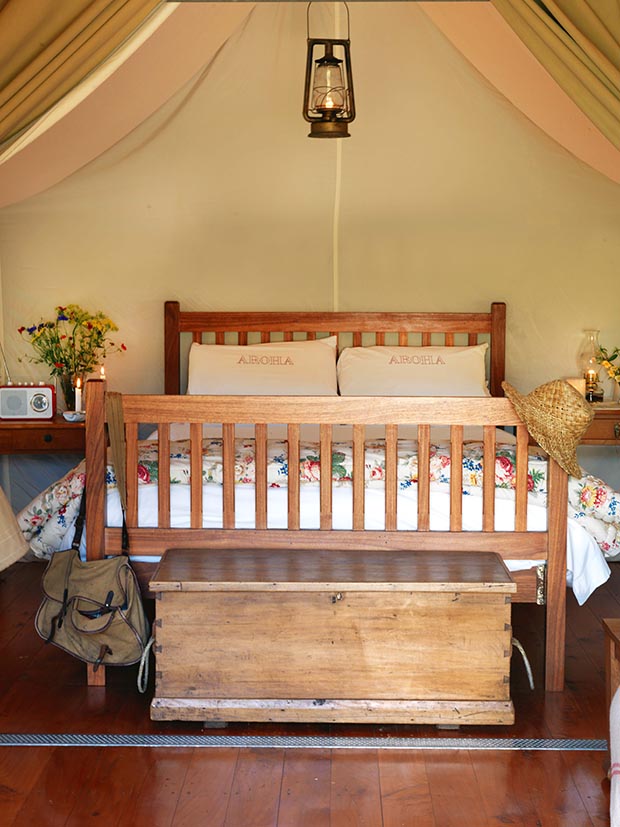 A succession of lamps lights up the night: kerosene outside, a Tilley lamp in the front room and a romantic gas lamp in the main bedroom with its queen-sized bed. This part of the tent is lined with white fabric and has mosquito-proof roll-up windows. In the main room a couch opens into a double bed.

Johnny dives too, prising crays and paua off the rocks on rare calm days. Jim’s mother Elizabeth (Ibby, 89, widow of Happy Wheeler) has lived here most of her life.

But it’s not easy living off marginal coastal land designated a heritage park. “Because it’s a wilderness, we can’t subdivide any more land, ever, or develop it in any way,” explains Jim. “There are strict rules about what we can use it for.” 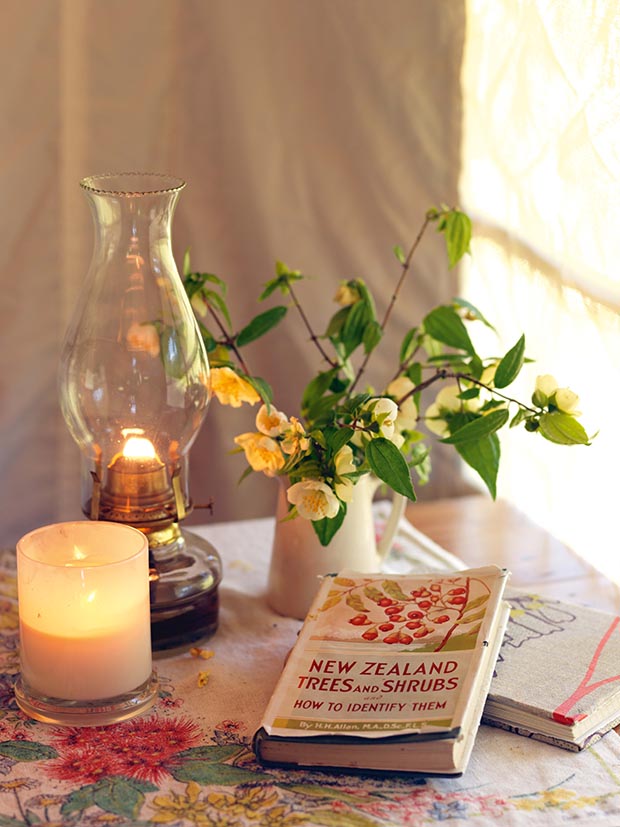 A book to help identify native trees waits on the bedside table.

“We love it here,” says Anna, “but we have to preserve it – so we try to draw in people who have a low impact on the land and make a living with a low impact too.”

Over the years great income ideas have come and gone. There was the film business where Jim, Anna and their families would pitch in to help international film crews using the beach and surrounds for movie backdrops, seascapes and other scenes. Hercules was shot here, The Almighty Johnsons, Xena: Warrior Princess and dozens more, but that’s slowed down. Although Jim and Anna don’t cook for guests, there are free-range eggs and bread on offer. 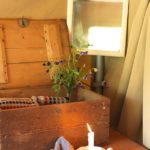 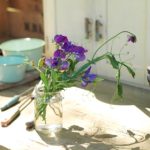 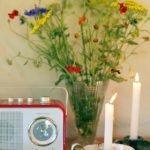 It’s a busy, happening place in summer. But business is weekend and seasonal, although Jim opens every fine Sunday in winter too. And the whole thing must be packed up (deep fryer, fridges and all) and towed home every night to meet council regulations.

Enter the safari tents. All Jim had to do was design and build a unique New Zealand version. Today his original tent sits in a secluded glade, fringed by flax and pohutukawa trees, overlooking a stand of maturing native bush. It’s five minutes’ walk along the river to Lake Wainamu and its fabulous water hole, another 10 minutes to the beach. 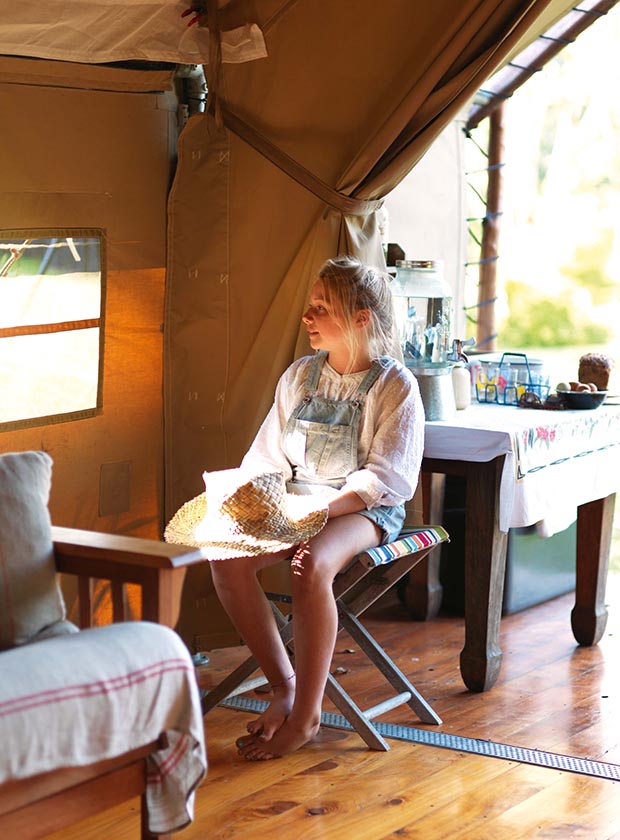 The floor is polished macrocarpa, fitted with vents designed to keep the tent cool in summer and warm in winter.

Jim’s desire for something unmistakably Kiwi, eco-friendly and built for the New Zealand weather came together like a dream. “I designed it like a whare,” he says. “It’s got long eves and a pitched roof that goes out well beyond the walls so water runs straight off and there’s plenty of room where you can stay dry.”

A few steps down the hill an outdoor bath invites top-and-tail bathing surrounded by the calls of moreporks and stars that seem far brighter than in the city.  A prized achievement is the flushing loo with a holding tank similar to those found in yachts and motor homes. “No smelly long-drops here!” Cooking is courtesy of two Weber barbecues, one gas, the other set with charcoal and manuka, while Ibby’s contribution is an open fire with trivets on which to cook spuds over the embers.

The second tent, already in use, is slightly bigger and configured for families or a crowd of friends rather than honeymoon couples. Next summer there’ll be a third, more glamorous version.

Says Jim: “We’ve had three proposals here and several honeymoons and wedding anniversaries. We’re loving being part of people’s lives and sharing their enjoyment of Wainamu.” The camp-site kitchen is hung with enamel saucepans and cast-iron frying pans, loot from Anna’s enthusiastic combing of op shops.