Gone with the wind

If there’s not a saying somewhere about children and construction sites being a poor mix, there should be. It’s true that three-year old Vita, in her appreciated role as passer-upper of tools, has learnt to differentiate between club and claw hammers and knows her strip nails from her threaded rods. But as well as becoming embarrassingly foul-mouthed with her mimicry of builders’ expletives, she has also sent James’ and my stress levels into orbit by doing a little child-rearing of her own when we’ve been impeded up ladders and scaffolding.

The victim of her caring is her baby brother Zen. No matter how soundly he appears to be sleeping in his pram, as soon as I’m perched aloft, holding something vital in place for James to nail, his abandonment radar switches to high alert and a desperate howling ensues. Sensing her opportunity Vita steps in, crooning “there there, little darling”, as she pokes things into his wailing mouth, twists his waving limbs or steers the pram towards the top of our steep, stony drive, while I watch helplessly. Pleading, bribing and bellowing for her to stop have sometimes worked, but on other occasions either James or I have had to drop what we’re doing and race, hearts in mouths, to the baby’s rescue. 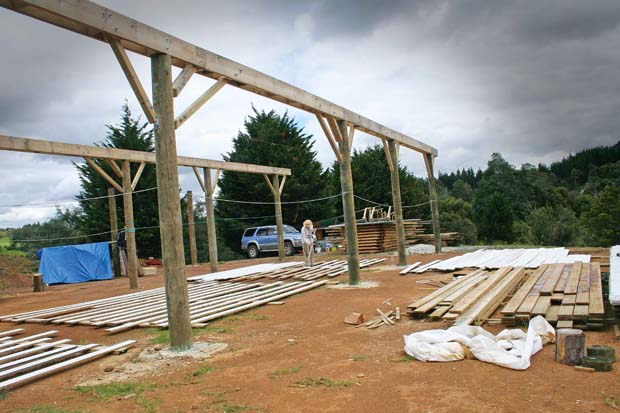 We are building again, constructing our long-awaited bathroom and version three of our temporary kitchen. Unlike the first two kitchens we’ve cooked in over the years, this one is coming with four solid walls and, while the space will ultimately be just a covered-in porch, I am preparing to wholeheartedly love this new interim cooking zone for its imperviousness to the weather.
When we first shifted onto the land, I eyed the hulking forested ranges running to our south and west and sagaciously informed James that our new lives would be forever protected from sou’westers.

The said wind bided its time for a spell before walloping our then-caravan home with such force I’d thought we were going to tip over. Since then it has proven to be the one wind that we’re exposed to and, while I’m generally not a fan of anthropomorphism, James and I can’t help feeling that it possesses a cruel and vindictive streak.
As well as constantly puffing out the gas rings we cook on and blowing goose-bumps across wet skin when we’re taking an open air shower, it also seems to leap out from nowhere during critical times when we’re building.

No matter how calm a day may appear, as soon as we prepare to lay a length of building paper the sou’wester will grab it and flap it from us. If I’m holding up heavy pieces of wood for James to fix into position, the wind will buffet at them like an invisible St Bernard and when James is hanging a plumb line, waiting for me to mark its position as he perches on a truss far above, a faint sou’west breeze will teasingly swing the weight just enough to prevent me from getting its bearings.

The first time we truly hated our devil wind was during the construction of our ceiling. Rather than paint the sarking once it was up, James laid kilometres of wooden boards across the building site and spent a long day whitewashing them all. He had just finished the final one when the wind bounded in like a boisterous dog, kicking up clouds of grit and dust that settled across the drying paint. Exiting just as quickly as it had arrived, it left me half sobbing in fury as we frantically scraped the dirt (and tacky paint) off with spoons. Luckily, we’re going for a rustic look with our mud-brick/ hybrid home which sports the occasional splotch, scrape and other imperfection viewed when raising one’s eyes to our ceiling.

In the next post, Polly and James scout for materials and visit a tomb as part of their building inspiration.