Jim Kayes, a journalist for 25 years, survived growing up with four sisters and is now married with two daughters. Despite this, he thinks he’s in charge and on-trend. This week Jim continues a family tradition.

A photo of my youngest, five years ago, popped into my Facebook feed. She was flexing for what the then six-year-old liked to call “the gun show”.

It’s cute, this scrawny kid with a cheeky grin on her face desperately trying to produce a bicep. I showed her, and she said, with all the seriousness an 11-year-old can muster, “Dad, please delete that. I have a social life now, and that could ruin it.”

So I shared it again to Facebook. Surely it’s a Dad’s duty to embarrass his daughters, and I’m pretty good at it. I learnt from an expert. I was about 14 when I went down in a screaming heap during a rugby game. It was, sadly, near the sideline and Mum decided it was a good idea for her to wander on to see if I was ok.

Whatever ailment I had was cured instantly. Who on earth wants their Mother checking on them during a game of rugby? I was crushed.

With a large brood to care for, Mum was almost oblivious to our levels of embarrassment. When it came to school socials, I had a cunning plan that included telling the Old Girl that it finished later than it actually did, which meant she wouldn’t be there, waiting outside, as we all piled out of the school gym.

You don’t have six kids and not be wise to such ruses. Oh, the humiliation. So it’s only fair I pass such embarrassments on to my children. Take the bus stop in the morning, teeming with kids and a fertile ground for parental public affection.

The eldest allows the occasional kiss on the cheek as she attempts to leave the ute faster than Usain Bolt. While the youngest is still happy to have a cuddle and a kiss before getting out, she thinks my tooting of the horn, calling out her name and waving goodbye is a step too far.

So I keep doing it.

It seems that all sorts of affection can be off limits, especially between their parents. Heaven forbid we’re ‘caught’ sharing a cuddle in the kitchen. The youngest will declare we should “get a room” before suggesting we’re disgusting.

For one so young she is hilariously fashion conscious, though she mixes that with a tough, Tom Boy approach to life. Much, it seems, begins and ends with the state of her hair which is funny considering some of the styles she endured as a younger child – thanks to me. 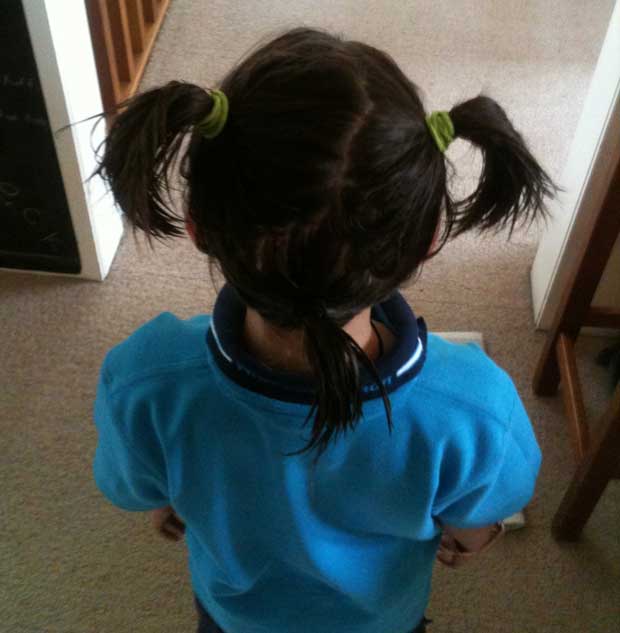 The jobs their mother and I had back then meant split responsibilities. I was in charge of the chaos at breakfast while my wife dealt with hungry hooligans after school. I was often found brushing and “styling” their hair. I quickly perfected the pony tail but was seldom satisfied with just two. Why stop there when you could create, three, four or five?

She was none the wiser and would happily skip to school with multiple stalks waving from her head. I have the photos and will produce them at her 21st.

The fact is our girls are a lot more trendy than I was at their age. In a big family you’re lucky if clothes aren’t hand-me-downs and, on a school teacher’s salary, Mum had more important things to worry about than whether her kids were decked out in the latest threads. 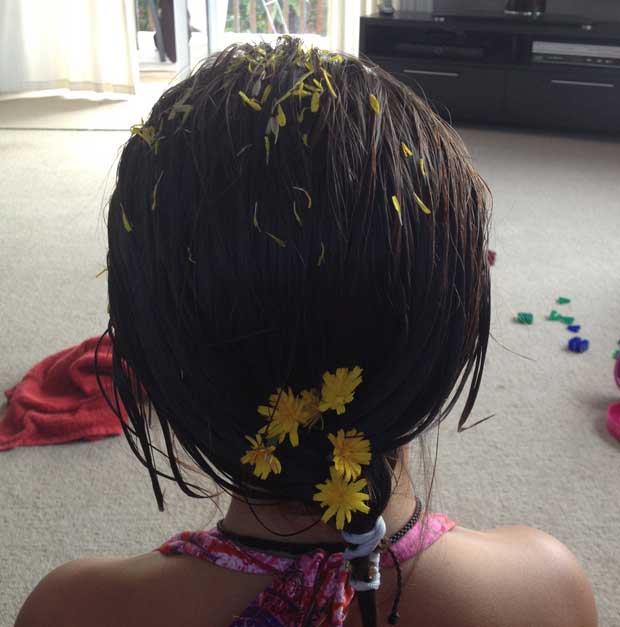 A daisy unchained, one of Jim’s less successful hair styles.

So there were spectacular failures. At about 13, I was bought a pair of jeans that were so far removed from Levis that they had a picture of a cowboy sewn into the bum.

They were never worn.

In the past I’d been considered “OK” at clothes shopping for the girls thanks to my former job of following the All Blacks around the world, but only so long as I stuck to certain shops.

I wouldn’t risk it now especially as my own “style” is so vulnerable to easy ridicule these days. I bought new track pants and was proudly showing them off to the youngest as we cooked dinner together.

“Check these out,” was the suggestion, “pretty cool huh.” (As if track pants can actually be cool.)

“They’re okay Dad,” she replied, “but don’t wear them outside with your grandpa slippers.”

Jim Kayes’ blog: My musical tastes are heading in One Direction (and that’s downhill)