Gore to Lawrence: What to do, what to eat, and where to stay Palpable energy courses between Gore and Lawrence, the rural area where Southland stands shoulder to shoulder with Otago.

Ruler-straight roads cut a severe line across Southland’s Waimea Plains until reaching the foot of the surrounding ranges where they trail up, around and over into Otago. Meanwhile, the Mataura River twists through the plains, leaving the land both fertile and flood-prone.

This changing scenery is to the visitor’s benefit, but there are distances to be covered – usually beneath endless blue skies – between the region’s gems. Embrace the drive between Gore and Lawrence and find small towns rich in history and character. It is the land of goldmining and moonshine-distilling, of cycle trails and high-country churches. There is much to seek out.

Two of the 22 Great Rides that make up the New Zealand Cycle Trail lead riders through this region. The dusty paths are lifelines to many towns, depositing achy pedalers on their doorsteps to be watered, fed and provided with a bed.

The Around the Mountains Cycle Trail is a 186-kilometre path that circumnavigates the Eyre Mountains and combines towering, snow-dusted mountains with smooth Southland plains. It’s a scenic trail from beginning to end; starting with a cruise on the TSS Earnslaw from Queenstown to Walter Peak, before winding through the stopping points of Mavora Lakes, Mossburn, Lumsden and Athol, then coming to an end in Kingston. Ride the trail from either direction, but starting at Walter Peak will generally mean more favourable topography. Around the Mountains is a grade 1-to-2 trail, so it’s suitable for beginner riders. There are several operators offering shuttle and tour services, many based in Queenstown. If Southland explorers are keen to try a taste of the trail, it is possible to ride the 33 kilometres from Lumsden to Athol, with a coffee break at Five Rivers. aroundthemountains.co.nz

The Clutha Gold Trail follows the journey of the Clutha Mata-Au River from Central Otago to the heart of Clutha. The 73-kilometre ride starts at the Roxburgh Dam — though all riders should first fill their bellies with a treat from Jimmy’s Pies (jimmyspies.co.nz) and their backpacks with seasonal fruit.

The work needed to get through the Teviot Valley can be rewarded with a breather at Faigan’s Café & Store (on Facebook) in Miller’s Flat before pedaling on to Beaumont and Lawrence. 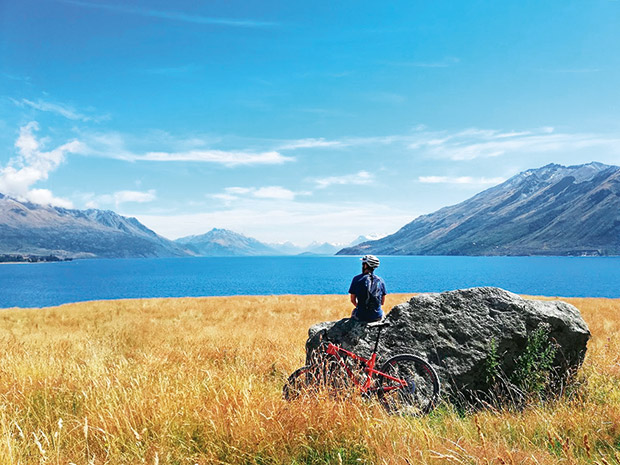 Many spread the experience over two days, so there are accommodation options in all of the four checkpoints. While many may baulk at the distance, the trail is another grade 1 to 2, so it is possible to ride it in a single day. Don’t worry; multiple rewards are awaiting in Lawrence. Just keep pedaling to thoughts of homemade chocolate, a B&B with a roaring fire, a glass of wine in a cosy café, another homemade chocolate… cluthagold.co.nz

The last punt of its kind
Twenty-five punts once loosely stitched together the two sides of the Clutha Mata-Au River but, these days, there’s just the one left. The Tuapeka Mouth Ferry is the last of its kind in the southern hemisphere.

The primary punt came from Southland in 1915, so parts of it are at least that old, and it’s a simple operation — two cars, one campervan or a handful of bikes can fit at any one time (or four Mini Coopers, the current record). Foot passengers are welcome to wander on board for the trip (there’s even been an unaccompanied dog). The punt is made up of two wooden hulls, with a sturdy platform in between. The movement of the river pushes the ferry across the river on an angle, with two cables keeping it from cruising off down to Balclutha. The ferry is technically part of the road network, so it’s free to use. The punt operates seven days, with crossings 8am to 10am and 3pm to 5pm (winter) or 4pm to 6pm (summer).

The crossing takes five to 10 minutes, so ferry operator Fiona Lomax recommends turning the trip into a loop. Starting from Beaumont, turn onto Rongahere Road (straight after the bridge) then drive about 20 minutes to the ferry. After crossing, follow Tuapeka West Road back to Lawrence — this part of the drive has panoramic views of the surrounding hills and more than a handful of curious sheep.

The loop should take approximately an hour. For a break from driving, there’s a 2.1-kilometre walking track along the Tuapeka River that passes a dam built in 1906 as well as goldmining sluices and batteries.

Dolamore Park in the Croydon Bush Scenic Reserve
Ask any local where the best place is to have a one-on-one with Mother Nature, and they’ll no doubt point towards Dolamore Park. This patch is a bush oasis in a desert of farmland — it looms vibrant and green during the 10-kilometre drive from Gore. Dolamore

Park is on the far southwest corner of Croydon Bush Scenic Reserve, which was established in 1895 when 130 hectares were protected against the energetic milling taking place in the area. The reserve now covers 867 hectares. 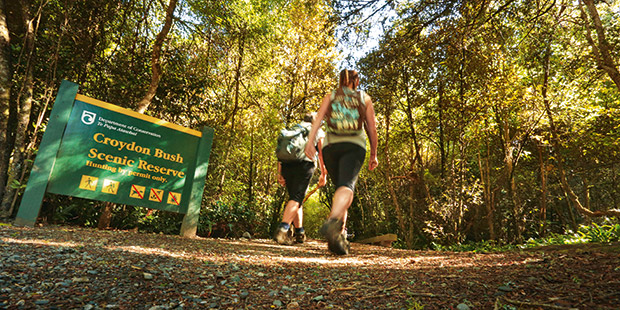 Dolamore Park is 95 hectares of native podocarp forest at the base of the Hokonui Hills, with 500 rhododendrons planted for exotic colour. It’s a parent’s wonderland; there’s a massive playground and large wide-open green spaces for kids to burn off energy. The park also has a campground, with powered sites for motorhomes and kitchen/toilet facilities.

There are several walks within Dolamore Park. The shortest option is the Dolamore Track, which takes approximately half an hour, although there is a detour to a lookout which can add an extra 30 minutes. Whisky Creek Track is a tramping experience (so choose footwear accordingly) following a two-hour loop through the native podocarp forest. Poppelwells Lookout has the best views over the region. Access to the lookout is from the Whisky Creek Track.

The Thomas Green
The namesake of The Thomas Green is Mr Green, the first mayor of Gore, who seemed to have a finger in every pie in town. The restaurant does have the air of being the “wine-and-dine” hub of the region, so Mr Green would no doubt approve. The Mataura Licensing Trust owns both the Thomas Green and Howl at the Moon (across the road). The trust is a community-owned company responsible for the sale of alcohol in Gore. 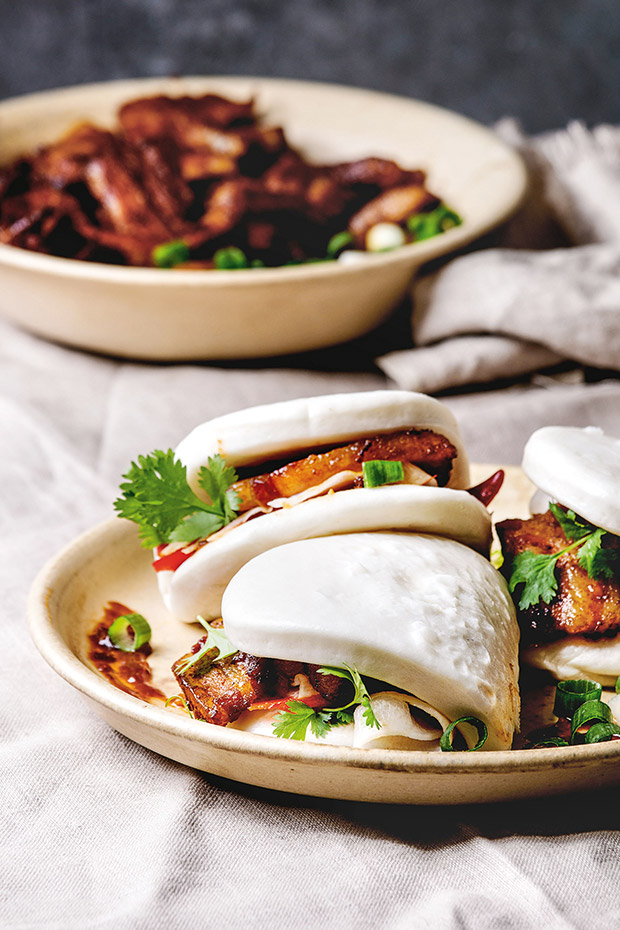 This trust is the reason that there’s no beer or wine sold in the local supermarket, but also the reason that Gore has a state-of-the-art multi-sports centre as 100 per cent of the profits are put straight back into the community. Management aside, The Thomas Green is opulent, with a luxe bar and decadent décor. The food is delicious and diverse; and be sure to save room for dessert.

One Chef Kitchen
Whether it’s duck-shooting season, the first frost of the winter, lambing, calving or the hectic period around the Gold Guitar Awards, someone has to make sure that the fine people of Gore are looking after themselves.

That’s where the ladies of One Chef Kitchen come in. Kathryn, Jane and Kylie whip up all sorts of homemade classics (and a few new recipes) in their small takeaway café on Gore’s Main Street, ready to feed those who are on the go. Their cabinet changes daily and is full of fresh produce. “We cook what’s in season and what’s good in the area, like southern-raised lamb. Our baking is full of butter and the good stuff, too.” While everything is tempting, special mention must go to the pork belly ciabatta, portuguese custard tarts and the seafood chowder. Oh, and perhaps the brioche… or the cheese rolls.

Food in Lawrence
Lawrence has several good cafés but is, unfortunately, lacking when it comes to evening meals. If pub grub isn’t on the menu, it might be best to make dinner plans in advance. There are a number of good little cafés in town though.

Hokonui Bed & Breakfast
Brian and Shona McLennan grew the timber for their lounge ceiling from seed. Impressive, isn’t it? They’re a hands-on couple; the farmers and former nursery owners designed and built their home with a B&B in mind (meaning no shared bathrooms). 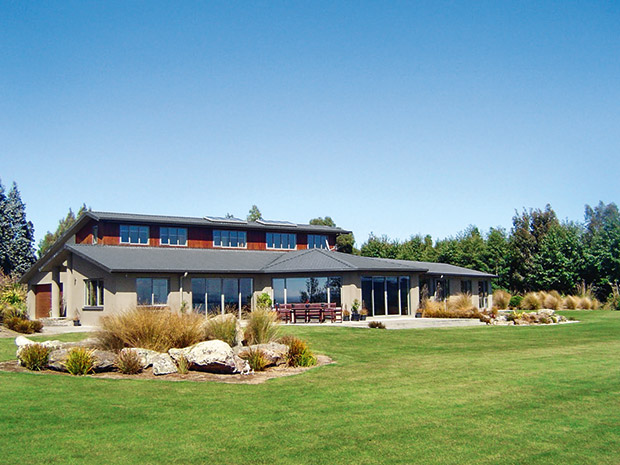 It’s perfectly placed to capture the sweeping sunrises across the valley; guests can sit back with a bowl of Shona’s homemade muesli or cooked breakfast and watch the spectacle unfurl.

Gore is only five minutes down the road, but with three rooms, extensive farmland, a snooker table, Shona’s cooking and two labradors, there’s barely a reason to leave. Regardless, Shona still points guests in the direction of the town. “So many people pass through Gore, which is a pity as the town has so much to offer.”