The green heart of Italy 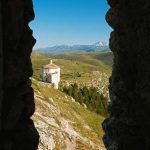 The mountains of the Gran Sasso National Park (above) reflect in a tarn on the high plains of the Campo Imperatore. 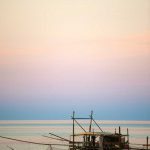 A trabucco, or fish trap, near St Vito on the Adriatic Coast. 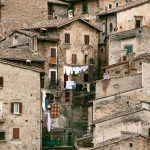 The mountain village of Scanno. 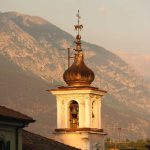 One of the churches of Pratola Peligna with the Maiella range in the background. 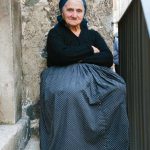 A woman in traditional dress in Scanno. 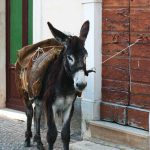 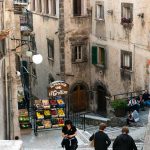 The narrow alleyways of Scanno. 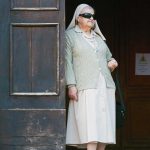 A nun watches the cherry festival in Raiano

For an alternative to well-worn (and often overrun) Tuscany, the relatively unknown Abruzzo region in central Italy offers a true Italian experience with the capacity to surprise. 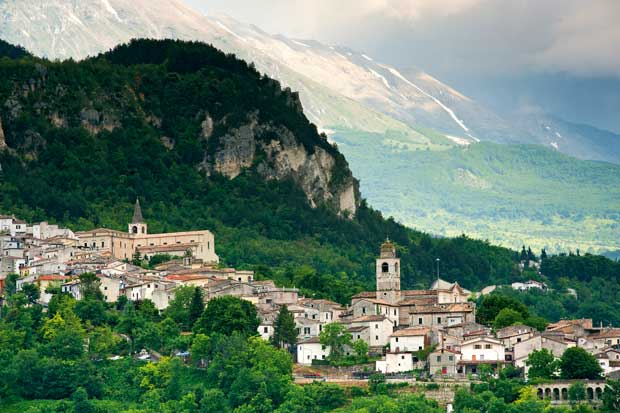 Florence, San Gimignano, Siena. L’Aquila, Sulmona, Pratola Peligna. More often than not the first three names will ring a loud bell – an old Italian bell at that. But the second three? Probably not so much. The first three are among the most famous – and beloved – of all European towns, and are the crown jewels of the magnificent hill towns of Tuscany. L’Aquila, Sulmona, Pratola Peligna, on the other hand, belong to the Abruzzo region north east of Rome that remains largely undiscovered.

I base myself in Pratola Peligna, a town that doesn’t feature in any of the few guidebooks available on the region. But it is strategically positioned in its heart, and that’ll do me. Alberto is the local cop and he walks the old town almost daily in his Ray-Ban sunglasses and – like all Italian policemen – an immaculate uniform. On day four he stopped me on my way to Caffe del Corso at the Piazza Madonna della Libera, where young Martina already knows what I will order: un cappuccino e un cornetto semplice. This time breakfast has to wait: I have to explain myself to Alberto. He is driven not so much by suspicion but curiosity. Strangers are a rare sight. Seeing my cameras he wants to know if I’m here to photograph his town. His English is excellent, a relief as my Italian is anything but, and most people in Pratola speak only that. Knowing that I’m from Australia, Alberto quickly points out that many people here have connections to that country. “People left the region for America or Australia,” he says, “there were no jobs here, no future.” It is an assessment that still applies today. Abruzzo has been economically depressed for a very long time.

In the northern section of Parco Nationale della Maiella, maybe an hour’s drive from Pratola, perched on the slope of a hill, lies the spa town of Caramanico Terme. It is one of the few places with a tourism infrastructure. At the national park’s centre I obtain the free permit for a walk through the dramatic Gole di Orfento, a deep limestone gorge below the town. The steep rocky slopes are covered with a green thicket of beech, ash and hazel. In its depth an ice-cold, crystal-clear creek rushes over polished rocks. Birds sing. Many flowers, among them rare orchids, display their splendour. The old town above is soon forgotten, replaced by a wild landscape of great beauty. Between the old villages and relatively untamed nature are few buffer zones. 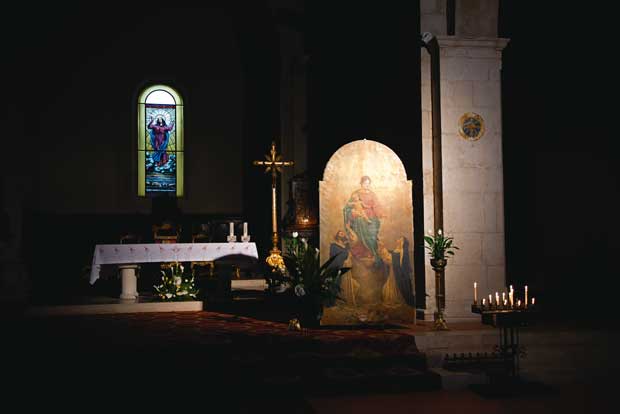 The outstanding feature of the Abruzzo region, one that distinguishes it from Tuscany, is its three national parks and 30 nature reserves. It is why the area is known as the “green heart of Italy”. The most famous park is the iconic Gran Sasso. A spectacular road leads up to the treeless high plains of the Campo Imperatore. It is early summer. Horses roam the plains, alpine wildflowers colour the meadows. This is the time when locals collect wild spinach, a leafy plant that grows in soggy meadows where the snow has just disappeared. I learn that the wild vegetable tastes best fried with garlic and chilli in olive oil and then tossed with pasta. The road ends at the decaying red art deco Hotel di Campo Imperatore where Benito Mussolini was kept prisoner for 12 days in 1943. Nearby is an observatory, and the top station of a cable car. Above all this looms Corno Grande – at almost 3000 metres, it’s the highest and most prized peak of the entire Apennine range.

Within the borders of the Gran Sasso National Park is the ancient town of Castel del Monte, which received international exposure as one of the locations for the George Clooney movie The American. Although one of the better-known towns, it is very quiet and I roam the narrow alleys alone. The same applies to the old village of Rocca Calascio, not far from Castel del Monte. Above it, on top of the ridge, are the ruins of a once mighty castle. Below it, at the edge of the rolling Navelli Plain that leads into the distance towards the limestone bastion of Corno Grande, sits the extraordinary church of Santa Maria della Pieta, built in an unusual octagonal design in the late 16th century. Again I’m the only visitor. 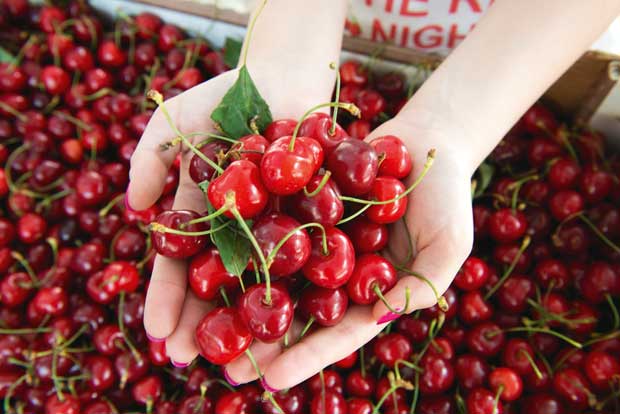 The Abruzzo region is full of cultural treasures. Unlike those in Tuscany, their existence is practically unknown and they haven’t been elevated to exotic locations in popular fiction books by the likes of author Dan Brown. The closest thing to Tuscany’s Florence is historic L’Aquila south west of Gran Sasso National Park. L’Aquila, however, is a truly unfortunate town. Since the devastating earthquake in 2009, the magnificent city with its architectural and cultural beauty is, as police officer Alberto expressed it, “a wounded city”. After those terrible minutes when the earth buckled and shook, almost every building that was still standing had to be extensively supported to prevent total collapse. (The earthquake that struck Italy earlier this year was 100 kilometres away and while it was felt in Abruzzo, it caused no damage.) After years of stunned silence the cacophonous noise of reconstruction and restoration dominate now. Visiting L’Aquila is no longer “catastrophe tourism” but a help to the city in its healing process. And there is still a lot to see – including the impressive fortress above the town and the extraordinary Basilica of Santa Maria di Collemaggio. 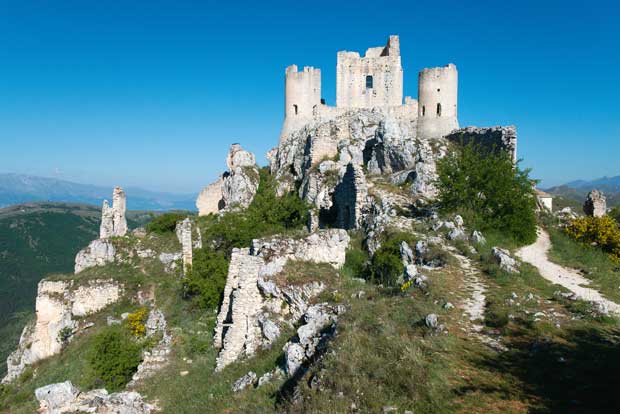 Much less damaged and a cultural hub of the region is Sulmona, 10 kilometres south east of Pratola. The city is the birthplace of the Roman poet Ovid. Every year townsfolk celebrate the Ars, Eros, Cibus Festival (Art, Love, Food). Part of this festival is an event called Kissing under Ovid’s Gaze, at the Piazza XX Settembre. Countless couples gather there at the beginning of December, when winter exhales its icy breath over the city, and kiss each other right under the sculpture of Ovid in the centre of the piazza. Sulmona architecture and cultural monuments still show a grandeur that reflects an important past. One of Sulmona’s prized specialities is confetti; sugar-coated and coloured almonds. The little pieces are sold individually as sweets or are artfully crafted together into flowers.

Although Abruzzo’s landscape is dominated by wild mountains, rolling hills, high plains and dark forests, there is another, very different part to the region: the coast. From Pratola it takes just 45 minutes to the port town of Pescara. Pescara lies on the Adriatic, a coastline that lacks the dramatic beauty of its eastern counterpart, the Tyrrhenian coast. There is however a section of this timid, mostly surf-less coast that warrants a seaside trip: the Trabocchi Coast between Francavilla al Mare and Vasto. Trabucco are wooden constructions built into the coastal waters. These filigree structures have a large fishing net at the end that can be lowered into the water. Usually built on promontories to reach deeper water, some of these amazing contraptions are still in use. 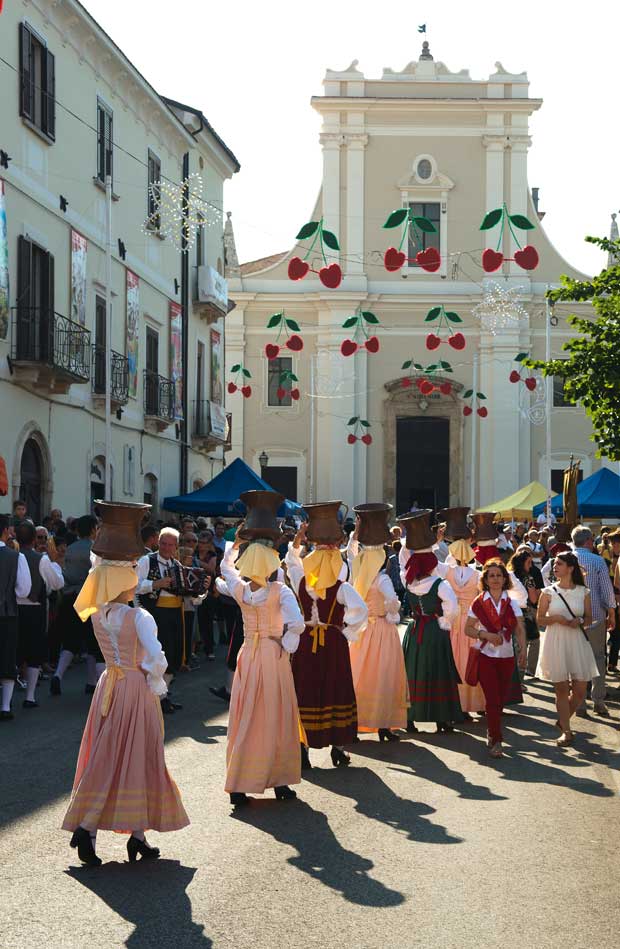 One excursion brings me to Scanno, possibly the quintessential Abruzzo mountain village. Immortalized in the iconic images of Henri Cartier-Bresson, it is also the starting point of walks into the surrounding mountains. I follow a track through a narrow valley, up to a saddle and into a peaceful hidden paradise of alpine meadows surrounding Fattoria Jovana, a remote farmhouse at the foot of the Serra Spavera. There I meet Dino Carfaguini, who lives in Boston. Having grown up in Scanno he left the region as a young man to pursue his dreams on the other side of the Atlantic. But his heart never left Abruzzo. Now in his late 70s, he comes back every year to spend a few months up in his native mountains at the farmhouse, which offers walkers meals and drinks and a bed for the night. It’s Dino’s Italian world, a world that has dramatically changed. “There used to be a town with 400 people here. Now there is a fattoria and some summer pastures.” The once widespread agricultural world of Abruzzo is shrinking fast. With people leaving the region, farms get abandoned, pastures run to seed. Nature is claiming back what was once hers. Forests are expanding, valleys fall silent and bear, wolf and lynx are back.

Maybe the economic hardship is why the people of Abruzzo are holding on to traditions. From spring through to autumn, there is always something to celebrate and various festivals fill the calendar. On 6 June, it is Raiano’s turn: the Cherry Festival is on. Cherry orchards surround the town and the fresh, crisp fruit pile up on tables. In the afternoon a parade takes place. Town folk are dressed in traditional costumes, women wear necklaces made of cherries. They sing, dance, laugh and there is an air of carefree enjoyment. That evening I return to Pratola Peligna to find the street to the house I rent cordoned off by Alberto and his crew. A religious procession is underway: Sollenita del Corpus Domini – the Solemnity of the Body of Christ. The loud and joyful atmosphere of Raiano is replaced by a more sombre mood while the citizens of Pratola Peligna make their way to the church. Like the cherry festival, this religious procession is a show not for tourists but entirely for locals. Tuscany, in all its beauty, lost its innocence a long time ago. But the Abruzzo region is still intact. 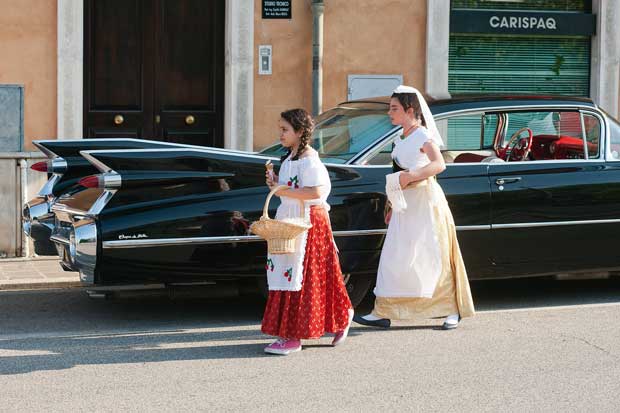 Getting there: Fly into Rome, rent a car at the airport, then drive to Pratola Peligna (three hours away). To explore the Abruzzo region, a small car is essential to navigate the narrow winding roads and very cramped streets in the old towns and villages.

When to go: June and July, the European early summer seduces with lushness and vivid life. In the high mountains, especially in the Maiella National Park and around the Corno Grande in the Gran Sasso National Park, walkers can still encounter snow.

More to see: Visit the Hermitage Santo Spirito a Maiella, hidden in a deep valley in the Maiella National Park. Walk through the dramatic Gole di Celano, a limestone gorge near the town of Celano. Stroll through the excavated Roman settlement Alba Fucens and visit the ancient mountain town of Pacentro.