Grow nutrient rich vegetables by powering up your soil Commercial organic gardener Shannon Wright grows fresh, health-giving produce to sell at her local farmers’ market. She shares her secrets to creating fertile soil filled with biological life, and how to create a nutrient-dense salad. Learn more about growing the most nutritious greens in the September issue of NZ Lifestyle Block. Subscribe here.

Watercress, chinese cabbage, and chard are the three most health-giving greens you can grow, but they’re only as nutrient-rich as the soil in which they grow.

She says her primary goal is to create fertile soil, full of biological life. She’s the first to admit it’s a complicated process. After five years, she is still working on it. But there are simple things that can be done to get started.

Taste-testing
Shannon’s favourite test is also the easiest. “I’ve learned over the years to taste-test, so I have a baseline. Then I can tell how my produce could be better.

“Taste-testing enables me to become more in tune with my surroundings and senses. I can discover if a plant’s bitterness or sweetness works, whether it’s time for a plant to be removed and to grow something else.” “I do a standard Hills Laboratory soil test to understand my base saturations: what’s in the soil, what’s high, what’s low. You want to see that the organic matter is going up, that the calcium and magnesium ratios are getting in check. Low calcium equals low energy and structure.

“Ideally you want seven-parts calcium to one-part magnesium, and usually you’ll see your calcium is out. You want to see that the potassium (K) and phosphorus (P) are right – 1:1 for veggies. High potassium replaces calcium and gives you low-nutrient foliage. Low phosphorus means low yields and lots of weeds.

“Those are the ones you want to concentrate on before anything else.”

Shannon does twice-yearly Reams tests through Environmental Fertilisers, which then creates a custom fertiliser blend for her garden.

Bacteria & fungi: soil food web test
A soil food web test shows the ratio of bacteria to fungi in soil. For vegetable growing, the rate should be about 1:1. “My soils are too bacterial, and it’s fungi that I want to increase in the soil.”

Nutrient density: Brix testing
A Brix test uses a hand-held refractometer to measure the simple and complex sugar levels in a plant’s sap, a reflection of how nutrient-rich it is. Anything over 12 is classed as very good, depending on the fruit or vegetable being measured. Poor is 1–7; anything from 8– 12 shows good progress. The same test can also show if calcium levels are adequate.

“You’re testing the leaf, not the fruit,” says Shannon. “I put leaves in a garlic crusher and press them until juice runs out onto the refractometer.”

More fungi in the soil is required to improve Brix levels, says Shannon. “You need fungi attached to plant roots to be able to uptake nutrients. Fungi are so important to help retain minerals and moisture. And they’re vital to soil structure.”

There are different types of refractometer, and it’s important to get the one that will best measure your chosen plants. For example, there is a lot available for winemakers, but they aren’t suitable for vegetables. Shannon bought hers from the Koanga Institute, but there are other suppliers, including Environmental Fertilisers. 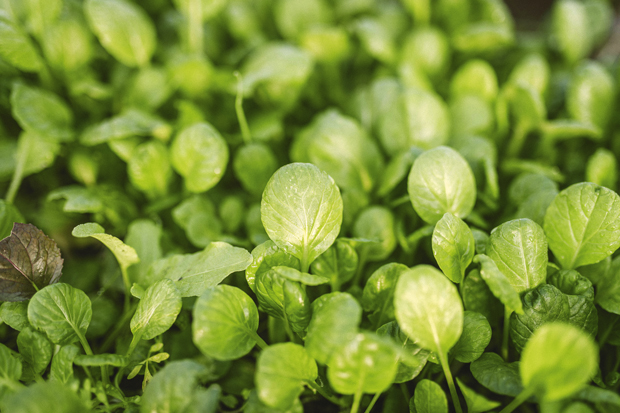 FIVE WAYS TO ENRICH THE SOIL

Compost
Shannon says her most significant discovery has been about compost. She was buying in vast amounts as she was unable to make enough, but she found it was causing a big problem in the soil.

“It was far too bacterial. We add too much greenery to compost, which is generally high in nitrogen, and that puts the soil out of balance.”

Compost will be too high in bacteria if not enough carbon is added, a common mistake made by a lot of gardeners. It’s essential to include carbon-rich ingredients such as dry wood chips, dry leaves, dry (already flowered) corn stalks, sunflower stalks, lupins, oats, cardboard, shredded newspaper or dry straw. In the right amounts, carbon helps to produce a compost that has the ideal 1:1 ratio of fungi to bacteria.

A little fungi-rich soil or compost can help seed good bacteria and fungi into a new pile. Shannon also recommends watering a finished pile with liquid fish and seaweed fertilisers.

“I’m now making compost using the leftovers from the garden,” she says. “But to do that, I need a lot of carbon, so I’m getting wood shavings, untreated, from our local furniture shop. That way, I know it doesn’t include allelopathic pine*.

*Allelopathic: a natural chemical process that some plants use to affect the soil around them so other plants can’t grow too close to them.

“Otherwise, you can always get wood chips from a tree arborist. ‘White’ woods (e.g, species with white-coloured wood) are good; they’re great food for fungi.”

Vermicast
Worm castings (vermicast) can be produced in a worm farm or purchased. A worm farm with the right food and bedding should be mostly crumbly castings, with minimal liquid run-off.

“I put it on everywhere. I don’t use the liquid,” says Shannon. “It’s fresh; it smells like forest earth and doesn’t stink.

“If you buy in vermicast, you need to make sure it’s not fed any pine. Pine is allelopathic. Also, avoid humanure (made from human waste). You don’t know what antibiotics or other medications people have been on.”

Changing to using more vermicast has been transformative for the soil on Shannon’s block, visibly increasing levels of fungi and soil life.

“At one stage, I had high nitrates and low sulphur, and you could see that in the yellowing of a lot of my plants. When I introduced vermicast, the change was almost instant. I was impressed with that, and that was when I stopped using brought-in compost.”

Open at the @waikatofarmersmarkets today until 12pm with music for your pleasure today, come grab your greens!

Soil conditioner
Shannon adds organic gypsum (sulphur and calcium, or calcium sulphate) that is released slowly into the soil to help with structure and water retention. “You use calcium sulphate whether you have clay soils or sandy soils – you can still get compaction in sandy soils. It helps bind up excess potassium because often these soils have high potassium.”

“It’s quite crumbly. It’s not really like a fertiliser that you know from a bag that you sprinkle with your hands. It feels more like the earth.”

The mix she gets can include other additives, depending on what her soil requires.

Fish fertilisers
These are fed out in regular micro-doses through Shannon’s irrigation system. She says she used to spray it over her plants using a knapsack sprayer, but irrigating it is far less time-consuming.

Shannon also finishes prepping new beds with a fish hydrolysate from Pacific Biofert, a mix of finely ground-up fish and other additives that is cold-composted.

“I go along with a watering can with the hydrolysate in it to increase the fungal activity from the start.”

OTHER WAYS TO CREATE NUTRIENT-DENSE SOIL

Fluff it up
Shannon’s garden is a red-and-green-striped mix of garden beds and tracks. The compacted tracks make for easy walking. The bedding soil sits 10 to 15 centimetres higher, and you can easily push your fingers into it, then your arm.

The almost fluff-like structure is created using a special fork Shannon employs to “crack” the soil. She doesn’t turn it over, except when initially creating a bed, but uses the fork to “lift” it slightly. Her custom-made one goes down 40 centimetres.

“It’s essential to create aeration in the soil, whether it’s sandy or clay. It allows the oxygen in – it’s like us breathing really – and that helps to increase fungal activity. It helps water get in; it helps soil life. The soil is easier to work with, especially when you’re seeding or transplanting.

“Don’t stand on your garden beds – that’s important too.”

Monitor progress
Shannon can see significant improvement when she compares her soil now with what it was five years ago. But the changes have been incremental and involved a lot of learning. She places value in taking notes and photos along the way.

“Note things down at the same time every year. If you can afford it, monitor with a soil test and Brix levels. Make sure to date the photos so you can reflect over two years, five years, and you’ll see how far you’ve come. Taste-test and record your findings.”

Our very happy customer went home with her preordered veggie box and with some edible flowers today from our chat/garden walk and created this gorgeous salad! Know how your food is grown, we got your back with health!

TIPS FOR A NUTRIENT-RICH SALAD
Shannon has dozens of fresh greens to choose from, so her salad mixes tend to be more diverse than most people’s. However, even a professional gardener’s salad is heavily influenced by her critics.

“My salads are about 50 percent lettuce – that’s more just for my children. I don’t follow a recipe. I just pick a whole lot of different things. It depends on what flavours you like and those that you don’t ]. I’ll include mizuna, tatsoi, mustard, endive, rock, spinach, kale – all baby leaf because they are tastier.”

Microgreen pak choi, kohlrabi, red cabbage, cress, broccoli, and others are included for their high nutrients, along with raw carrots, beets, and turnips.

But the ingredients that take Shannon’s salads into the wild side are the added extras.

“I like adding herbs – parsley, chives, chervil, celery leaves, coriander. The more bitter things are, the healthier they are for you. I like calendula, heartsease – it’s like a mini version of a pansy – nasturtium, borage, even rosemary flowers, all chopped up.”

The big avocado fan adds chunks of it to the greens, then her other nutrient-rich extras. “I sprinkle sunflower and pumpkin seeds through it. I soak mine to remove phytic-acid because that can block absorption of calcium, magnesium, iron, copper, zinc.”

Shannon soaks seeds in bulk. She half-fills a one-litre preserving jar with seeds, tops it up with water, then leaves them to soak overnight. The next day, she drains the water and puts the seeds into a dehydrator. She then stores the dried seeds to use in salads – “add in what you like, there’s no measurement” – nut slices, and bread.

The final touch is a little natural dressing. “I love squeezing juices over a salad: lemon, lime, orange. I use the zest as well. You could add olive oil and apple cider vinegar too, or make up a vinaigrette with garlic, mustard, lemon juice, honey, vinegar, olive oil, salt, and pepper.”

Learn more about growing the most nutritious greens in the September issue of NZ Lifestyle Block. Subscribe here.