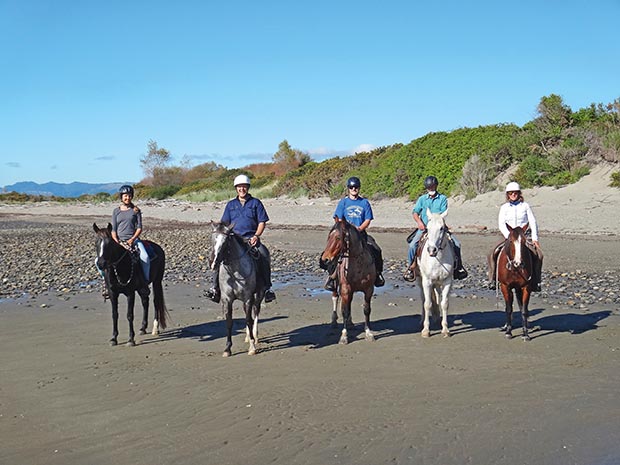 Baerbel and Thomas Hack were so determined to set up a dream seaside location for horse lovers, they built a road.

What does a family do when they move to New Zealand from Germany, wanting to live in the country on a small piece of land and generate some income?

For the Hack family, it was an evolution of serendipity, opportunities and a lot of hard work.

Thomas and Baerbel Hack and sons Yoshi and Henning were already long-time visitors to NZ when they decided to make the move permanent in 2009. 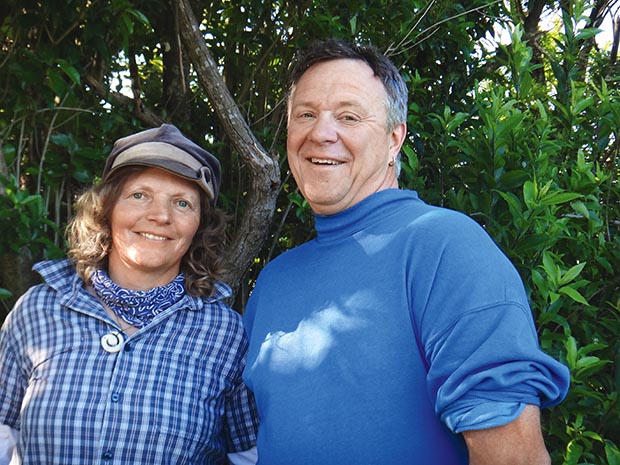 They initially rented a house near Takaka, joining the community and considering various options. Would hiring gypsy wagons or yurts to visitors work? What about selling solar bags and hats? Horse and cart rides and riding horses? What part of Golden Bay? How much land? What was affordable?

Thomas is an electrician and was in the process of establishing Fuse Electrical, enjoying the variety of work in dairy sheds, party venues, households and public buildings. It was up to Baerbel to explore ideas while working part time.

She and husband Thomas knew holidays on horseback had a special allure so they decided to start a riding business where visitors could either bring their own horses or ride the farm’s well-trained horses and stay in a funky old farmhouse. Non-horsey family members would be able to enjoy the bush and the beach. Heading out on the Hack Track.

That meant finding the perfect block, and the family searched up and down the valleys and roads of Golden Bay. They had to move three times because their rental accommodation was sold before they found the perfect 13ha block with a 140-year-old-or-so Walker Homestead, 10 minutes out of Takaka.

The sale evolved from a casual conversation with then-owner John Freeman which led Baerbel and Thomas to look at maps and proposed boundary lines, the house, sheds, water and roads, both formed and unformed. The horseshoe tree protector in front of the hitching rail at the farm house.

“My horse life evolved from there,” says Baerbel.

She had ridden in Germany but never thought she would one day own a string of more than eight horses.

Her sons are now out in the wider world, studying and working, and Baerbel has what she jokingly calls her ‘64 and counting’ projects on the go.

She carries her office with her in a specially decorated leather pouch and is often riding along with guests while talking on the phone. 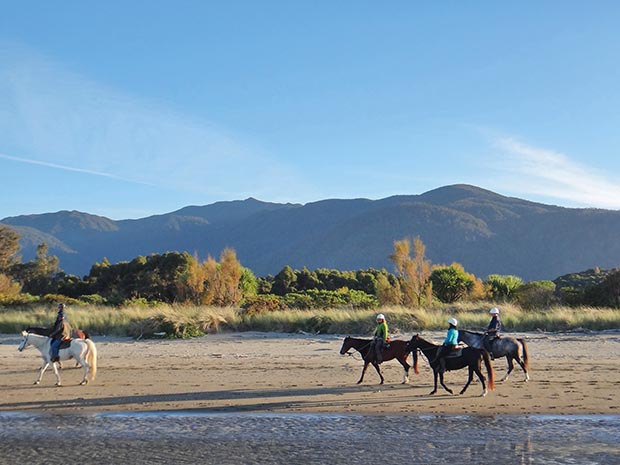 Baerbel in her office.

In Germany she was a hairdresser then a mother, while doing the practical and paperwork side of the family’s electrical business. Baerbel says she had transferable skills but new ones were necessary to become a competent caretaker of a small piece of land and to run their business, Hack’n Stay.

She worked as a horse trekking guide and then with farrier and friend Kris Russell in preparation for the role and says being able to care for her horses’ hooves herself is a skill she has found invaluable.

“But one day I will ring the farrier and watch the work being done! That will mean success!” 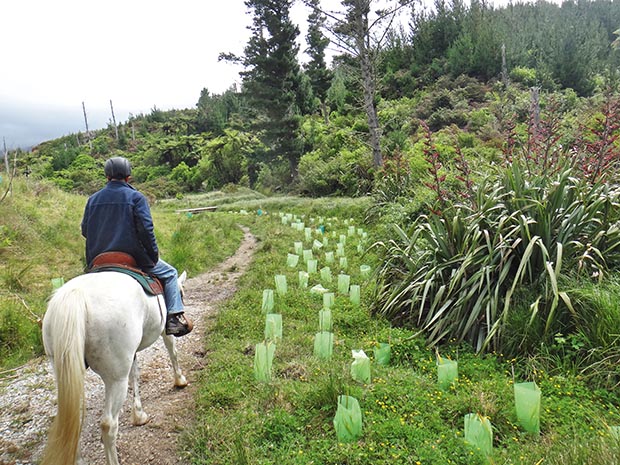 Her working day involves organising Hack’n Stay, warmly welcoming visitors, creating a riding, walking and push biking track to Patons Rock Beach, planting trees, redecorating and maintaining the old homestead, growing food, keeping chooks, training horses, fencing, building a pizza oven, setting up a milking shed for the house cows. She also works casually as a hospital aide and does a couple of night shifts every week with a tetraplegic client. Baerbel is a whirlwind.

“Sometimes I get into pickles because of cultural differences or language misunderstandings but you know, I’m always ready to work through problems and look for the best solution for everyone,” she says.

Walker Homestead has views to the sea and the mountain ranges that shelter Golden Bay. It was liveable when they bought it, with a sound roof and its original piles of natural marble rock, but it was in need of some loving maintenance. The Hack family, their friends and wwoofers swung into action. “It was mostly a case of sanding and painting and restoring the old sash windows and redecorating,” says Baerbel. Everyone scrubbed, painted, decorated and carpeted. “It’s a work in progress, you know!”

The result is a farm house with no pretensions of grandeur. It is what it is, as Baerbel is fond of saying, and that is delightfully quirky and fun. It’s a family home so there is a pile of fresh-smelling washing on the couch, books and magazines scattered over the table and a few dishes on the bench, all adding up to the informally welcoming atmosphere the Hacks create for their guests. 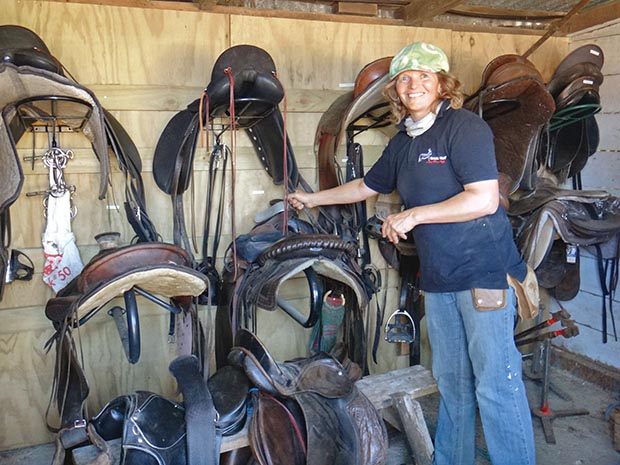 Checking the gear before the day’s visitors get ready to ride out.

Baerbel says she had a clear vision of how she wanted to present her horse-themed farmstay, so the decoration and décor pay homage to all things horse. There are old-fashioned horse toys and ornaments, the result of happy hunting in second hand shops, horse paintings, books (fiction and fact) and wonderfully painted bedroom walls. The blind pulls are old horse bits, coat hooks are horseshoes and some blinds and chair covers come in grass or hay patterns.

Then there are the little bits of magic given up by the house itself. When Baerbel and her helpers were peeling off tatty old wallpaper in a bedroom they came to a layer with horses on it. Careful cutting means there are now little views of that old paper preserved in the newly-painted walls. 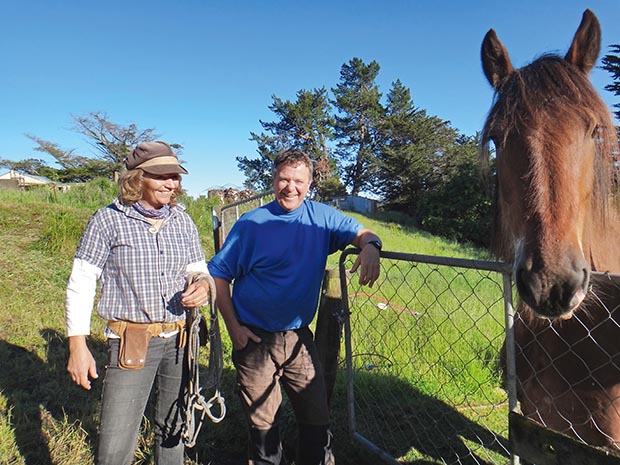 Baerbel and Thomas with Brown Acre.

Outside, in keeping with the working horse ethic of Hack Farm, the front yard is a large turnaround with hitching rails around the outside and in the centre. Within the circle of rails is a newly-crafted tree protector made out of worn horseshoes. Inside that is a young apple tree, sheltered from the inquisitive mouths of horses, which will one day provide shade and juicy treats.
Then there’s the Hack Track, initially an unformed public paper road running along one boundary and down the hill to Patons Rock Beach. 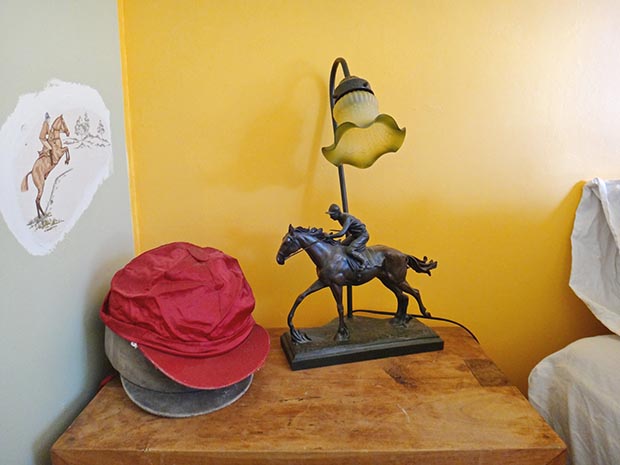 Under layers of wallpaper, the family discovered former owner was also horse-mad so they painted around it.

“When we were negotiating to buy this property, that we all liked a lot, I saw the paper road on the map and the possibilities it offered made this place even more appealing,” says Baerbel.

“Horses and roads don’t really mix these days, even though I first thought I would have to take the horses down the main road to get to the beach.”

It didn’t matter to Baerbel that some of the paper road went through a deeply pugged and trashed swamp and down a steep bank, or that some neighbours were not that pleased. She checked out the legalities, sought information and support from the local community, Walking Access New Zealand, Tasman District Council (TDC) and the Department of Conservation (DOC), and then began to build the Hack Track. 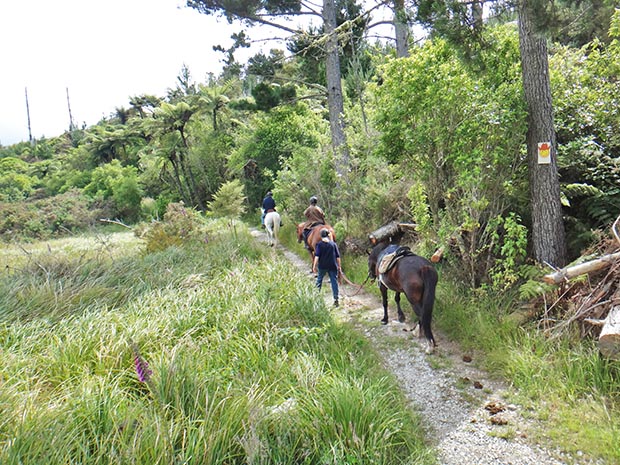 Heading home on the Hack Track.

Opening the paper road for practical but non-motorised use means Thomas and Baerbel can welcome the general public onto their land and, like the generous people they are, they take pleasure in the sharing.

“It’s good to see people using the track and we’ve set up laneways through the paddocks to keep both people and animals safe,” she says. 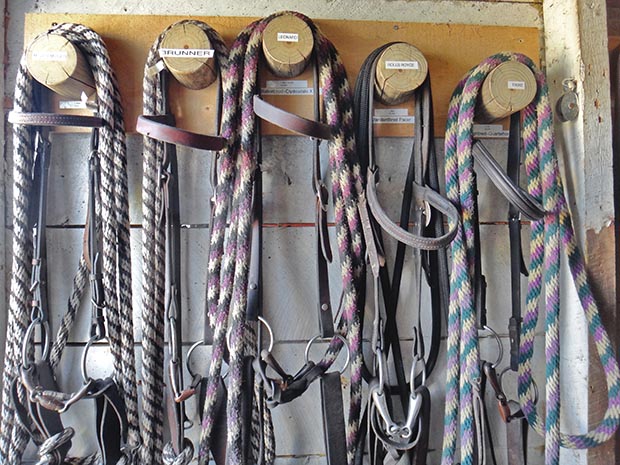 Bridles all organised for visitors before they head out on their trek.

There were working bees and line marking and tree cutting as the track evolved. Generous donations from both individuals and the local Golden Valley Riding Club contributed to the track build, and the couple applied for grants to replant and restore the swamp with endemic natives. DOC and the local council helped with engineered designs for a sturdy bridge over the swamp, one that would easily cope with the weight of half-tonne horses.

Most of the work was done by hand by fit young men and women using picks and shovels. A quad bike towed trailerloads of gravel and filter cloth to sort out the muddy sections, a digger cut a track down the steep bank, and a chainsaw was used for clearing fallen trees and gorse. 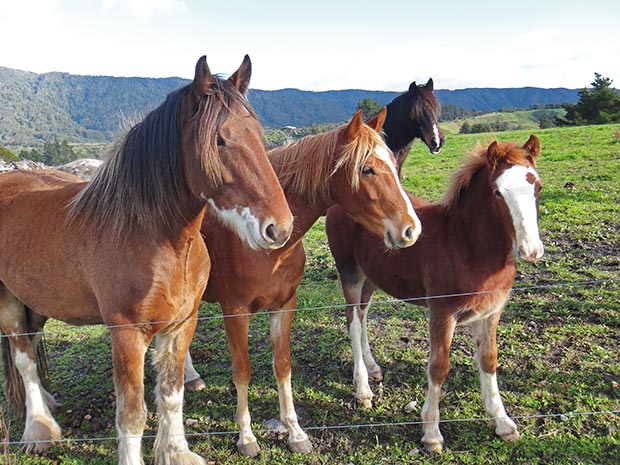 The 800 metre ride (or walk) to the beach takes in amazing 360 degree views of Golden Bay from the beaches to the encircling mountains, then winds through regenerating bush and swamp before dropping down the escarpment to the beach. Depending on the tide, visitors can choose where they go and for how long. A ride to the famous Mussel Inn takes care of an afternoon, with a beer or coffee at ‘half time’. The dressage ‘arena’ of the beach is swept clean twice a day and logs on the high tide mark can be jumped. There are hard packed lengths of beach, wide inter-tidal areas teeming with bird life, and on a hot sunny day the sea is a great place for horse and rider to swim. 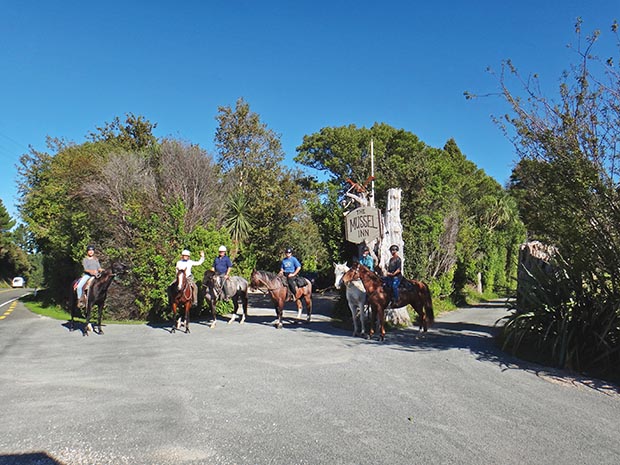 Visitors getting ready for their ride.

Baerbel wants her riding visitors, some who are new to riding, to always feel safe. Being on a horse and getting in tune with four legs, a half tonne body and sitting in a saddle, holding reins and directing a big beast, is a lot to take on initially. And that’s before the horse moves. All her horses were chosen for their easy going attitudes.

“They all have their own personalities and place in the herd, while at the same time knowing about working as a team.

“I didn’t go looking for the horses at first – they just arrived!” There is Song, the part-time hack horse who Baerbel rode during their first summer in NZ. Chloe The Clydie, along with a cart and harness, came as a ‘thank you’ for work and learning from her friend and farrier Kris. Rolls Royce was a freebie off the race track who became a goodie and was her first vaulting horse.

Vaulting is another string to her bow. Baerbel teaches a vaulting session for children every Saturday morning.

The Hack Farm Vaulties develop skills and gymnastic confidence with horses and give displays at community functions around the bay. 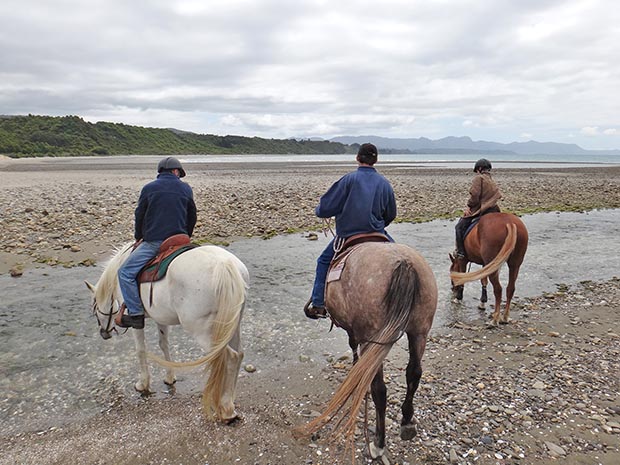 Getting in tune with four legs and a half-tonne body is a lot for a guest rider to take on.

Chloe The Clydie had a foal last year called Captain Malcolm, and is at her shining best in harness. She has carried brides and bridal parties, trotted locals around at the Puramahoi Centenary, taken grannies and small children driving alongside mounted riders on the beach and enjoyed hours of being patted and brushed by admirers.

The other horses have been acquired along the way. There is Jasper, Sigrid, Mac, Trixie, silver roan Brunner from down the Buller, Lennard, Mighty Midget, Gisborne-bred horses acquired on an epic road trip, and Brown Acre the tall – really tall – Clydesdale from Fergus O’Connor’s line at Appleby out of Nelson. She’s a young, dependable and classic, gentle giant type. 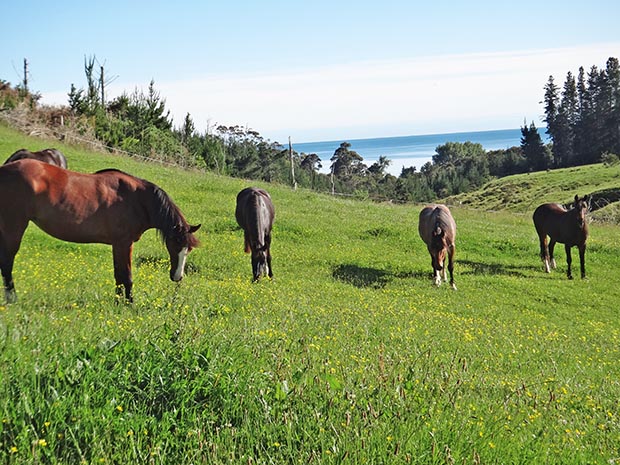 The horses get to enjoy a beautiful view from their paddock.

Baerbel runs mare and gelding groups and has a family group of Song, Chloe, Captain Malcom, Jasper and Sigrid, all from the blended line of Clydesdale, Welsh and Connemara horses from local breeder Cherry Wilde.

The Hack family is now well established and settled in Golden Bay, happily horsing around, working on their projects, enthusiastically welcoming visitors and enjoying their chosen lifestyle.

The horse riding and the accommodation are busy in the holiday season but Baerbel says she is pleasantly surprised by the amount of people enjoying the place year-round, heading out into the wild, hacking in and beyond Golden Bay.