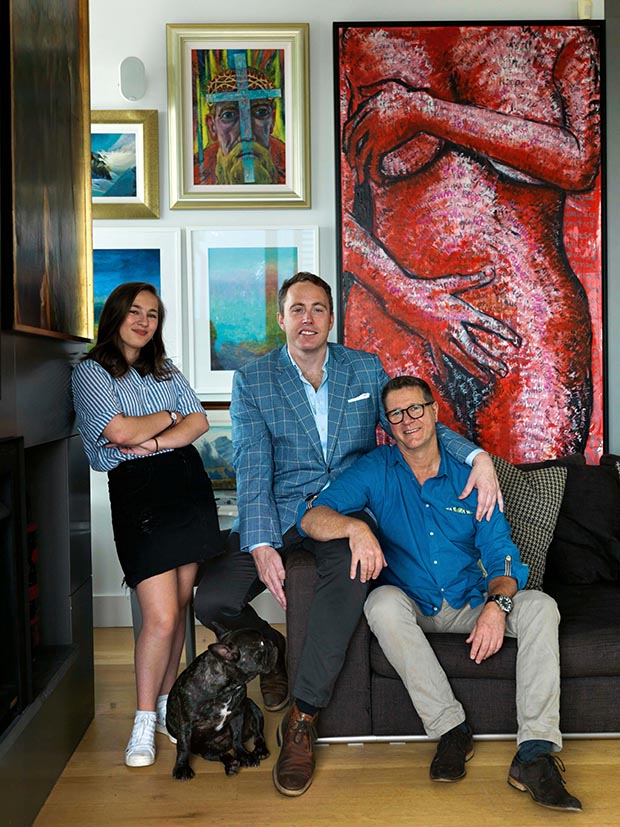 Not many teenagers surrounded by such an eclectic art collection actually value it. But Isabella is an aspiring actress and also topped her photography class at school, so she has an artistic streak that does. On the wall behind her is Crown of Thorns by William James Read while Ryan (left) and Marco sit in front of Touch by Fiona Webster.

Scaling the heights of success is becoming almost commonplace for a couple who became engaged on Mt Everest and steer a company that just scooped New Zealand’s most prestigious tourism award.

Marco Creemers has had more than his fair share of metaphorical slopes to climb including the uphill struggle that came with his long-held suspicion that he was someone different to what many people, including members of his church, thought he ought to be. But when Ryan Sanders proposed to him at the temple of Khongde Lodge above the 5380m-high Base Camp on Mt Everest, he realised that all those agonies, all those boulder-strewn emotional hillsides, were worth it. 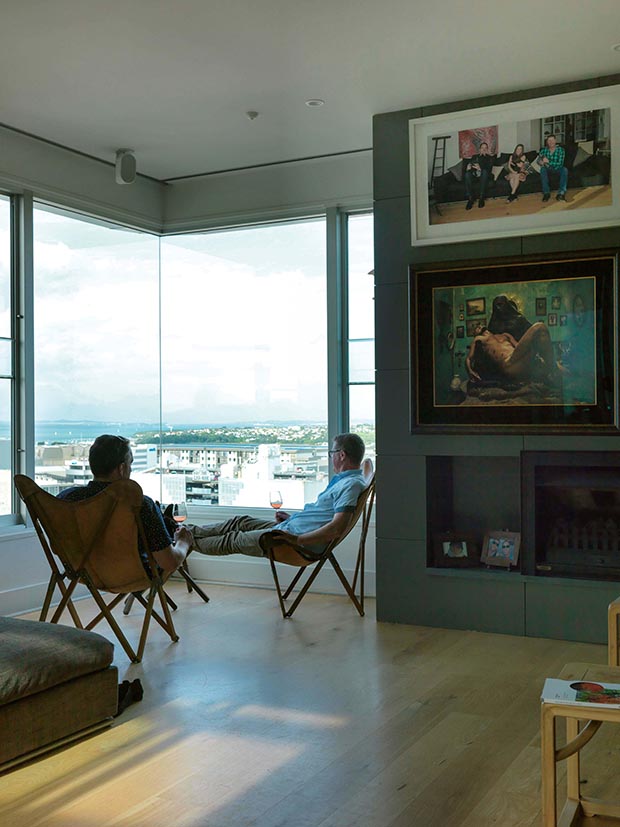 The couple kick back on folding Argentinian Generals chairs by Designsource in this room where ornaments include Return of the Sentimental Gentleman 1 (rabbit) by Sean Crawford and a brass sculpture of Hindu god Hanuman.

And during those inevitable times when life turns to schist, that flaky scree shifting and rolling unpredictably beneath the feet no matter how firm the bedrock, the memory of that declaration on the slopes of Chomolungma, the Mother Goddess of the Earth, is the greatest talisman he has.

The journey to that point on Everest wasn’t all that easy for Ryan either except that he had always known he was gay – long before he was old enough to know what that was. 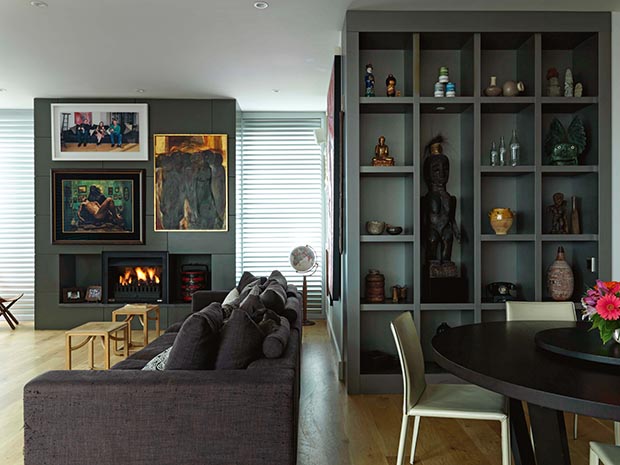 Although their collection predominantly features New Zealand artists, others have crept in; Golden Boys is by Australian Jacqueline Hick while below the family portrait is Seraphim – Untitled VI by Auckland-based Guilherme Taccetti. The display of travel curios includes a statue from Bali and the French antique glazed confit jar.

But, his favourite place – thundering up and down the rugby fields of Canterbury – didn’t seem quite the spot to declare it. Nowadays, older, more confident, he couldn’t give a hand-stitched, leather-clad bladder what people think.

When he took up an offer to play club rugby in Scotland in the early 2000s, it was the opportunity to present himself afresh: the real take-it-or-leave-it Ryan. This proved a pivotal time personally and professionally because, one too many snapped tendons later, he found himself full-time behind the desk in a major global bank. 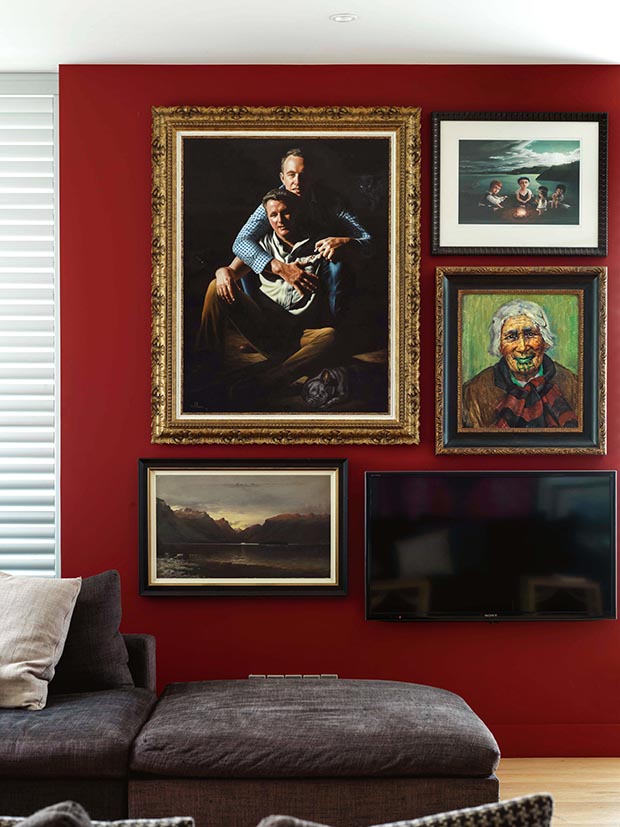 Ryan and Marco always promised themselves a portrait and this Caravaggio-inspired work is by Andrew Moon.

It was a good job that paid well but the lack of autonomy, the feeling of being a small cog in a very large wheel, became overwhelming. He needed his own thing. Something he could feel passionate about.

When people that Ryan met in the UK talked enthusiastically to him about his home country, a feeling crash-landed in his gut and he moved on it quickly. His instinct was that an in-bound adventure tourism business had potential. 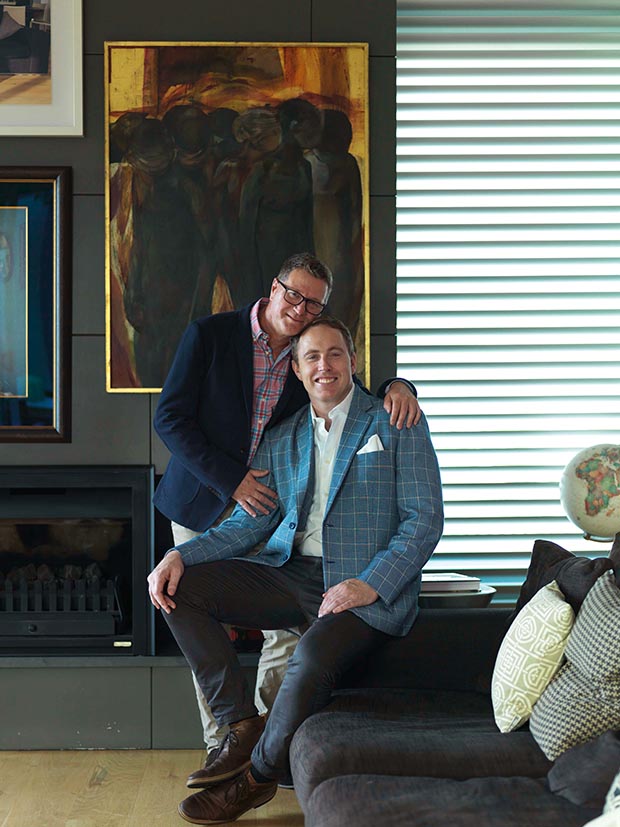 With more faith than money, he set up Haka Tours (hakatours.com) bringing thrill-seekers to one of the world’s best adventure playgrounds, Aotearoa.

In the beginning, he stayed at his corporate banking job to fund the venture. He advertised for a tour manager to be the on-ground face of the company so he could remain in England to generate cash flow. On-line, he found Auckland’s Vero Centre, a prestigious downtown address that had a large art-filled foyer where he could interview prospective tour managers. But when he got to the building all the foyer chairs were taken. There was no space available to conduct interviews.

Thinking fast, he drew himself up to his not inconsiderable height, eyeballed the security guard and, before he lost his nerve, announced that he was a lawyer from the 10th floor and had a booking. He needed a meeting space and he needed it now. Chutzpah they call it; audacity. It worked. Ryan got one of the centre’s offices gratis and from that set of interviews he snapped up Steve Latham, an adventurous diving instructor, who wasn’t at all averse to coming up for air and some land-based tours.

Steve came pre-loaded with a Pajero Sport SUV, a huge bonus because Ryan hadn’t quite sussed out how he was going to transport his tour groups. They made a powerful triumvirate – Ryan, Steve and the Pajero – and within four months Haka Tours was doing well enough to lease a 15-seater van. He waved bye-bye to the bank and Old Blighty and came home to Christchurch. 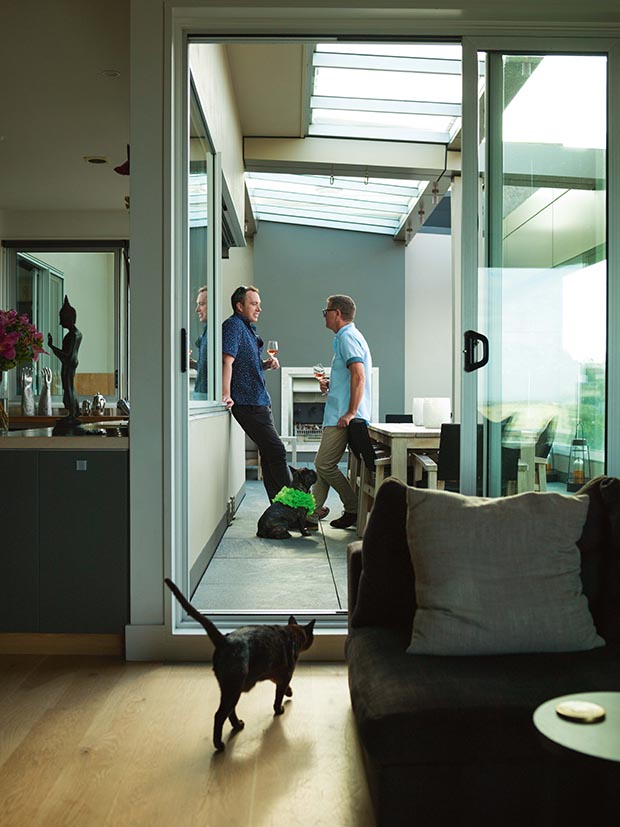 Louis joins the afternoon drink’s gathering still wearing a green lei he sported in a photo shoot for new staff joining Haka Educational Tours. As the office dog, he is often pulled into staff photos.

Meanwhile, Marco was on journey of his own. At Lincoln University he studied horticulture and commerce with a major in marketing, but couldn’t get his head around the planning and strategies of that discipline.

He changed his major to property valuation, found that a little blah, and swapped again to property management. There was the obligatory OE after he graduated which meant he arrived back home just after the crash. There weren’t a whole lot of jobs available for property managers. The kitchen and outdoor barbecue are getting a good workout recently as the couple explore the ketogenic diet. “We think of it as a lifestyle rather than a diet. It’s a no-carb, no-sugar way of eating so we have non-processed foods including meat, fish and chicken with wholesome organic vegetables,” says Ryan.

That Marco took a job as a labourer may seem a step backwards but it was to lead to three of the biggest events of his life. Working as a labourer for Samson Corp (which holds one of the largest property leasing portfolios in Auckland), he met his wife.

The couple had a daughter, Isabella, but slowly, inevitably, he came to the utter realisation that he had to find his true self – and that this had the potential to turn more than a few lives upside down. Although Marco enjoys painting the human form, he has found a forté for abstract composition; a selection of works from his first exhibition, inspired by the Ironbank building, is displayed on his studio wall.

It did, but all that is ancient history. Sixteen years later, here he sits in a penthouse apartment with Ryan on one side, Isabella on the other, cats Minnie and Macavity snuggled up in the cushions behind him, and Louis the French bulldog snoring at his feet.

The apartment is courtesy Samson Corporation’s owner, Sir Michael Friedlander, who immediately appreciated Marco’s property management skills. He had a property that he couldn’t shift. Would Marco like a crack at it? Oh, and by the way, there’s a caretaker’s flat on the top floor. Marco is now the corporation’s project director and that wee flat is now a whole lot bigger, its walls hung with Ryan and Marco’s collection of New Zealand art. Untitled by Karen Covic (top left), Do You Even Know My Name Toku Tahu by Brent “Jigger” Johnson and Station by John Dymond. On the credenza is Spirit Owl by Toonoo Sharky (Canada).

Marco recently held his first exhibition of his own paintings. At a drawing class at Browne School of Art, his tutor told him he “drew like a painter” so paint he did. Much of his inspiration comes from the work of Irish-American painter, Sean Scully.

His love of the line and form of buildings, combined with Scully’s bold lines that are both sharp and blurred, fell completely into place for Marco. His work now reflects the link between the structures he loves and art. About making art, Scully said: “I’ve never been conflicted. I’ve been conflicted about a lot of other things, but I always knew art as right and just.”

Ryan, whose company was named as Supreme Winner in the New Zealand Tourism Awards last year and was praised by the judges for his influential leadership, is kept busy growing the brand. That includes a chain of backpacker accommodation and hotels and expanding the range of sporting, educational and cultural tours. And because the sky is not the limit, one of his tours offers the chance for kids to go to space camp at the U.S. Space & Rocket Center.

Marco makes a good sounding board for all his ideas; in fact, Ryan calls him “Haka’s worst-paid employee”. In the interim, the couple has another project to plan: a winter wedding in Wanaka. There are venues to find, diaries to mark, family to wrangle, guests to invite and a myriad other chores. 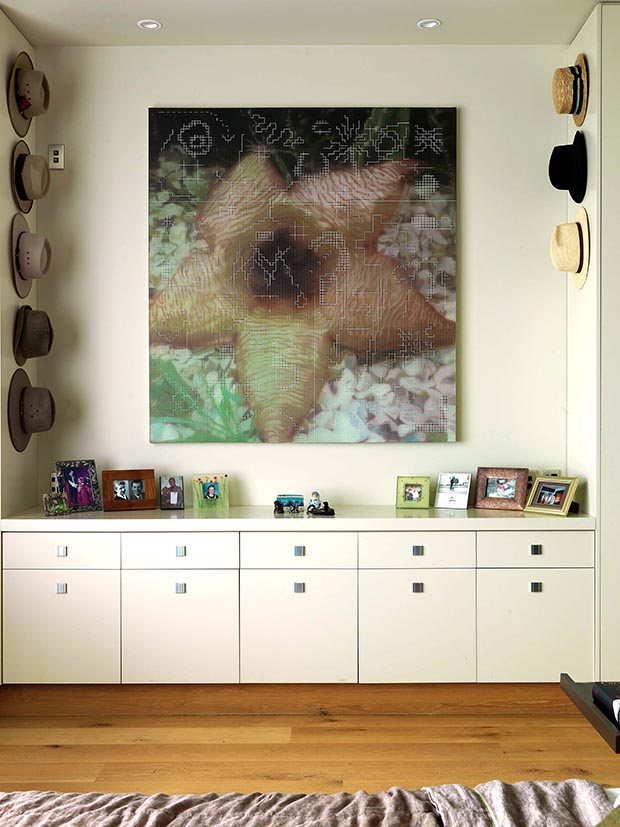 A work by James Cousins is flanked by a collection of hats belonging to Marco’s late father, Frank.

It took a while and a trip to the top of a mountain, but they got there. After all, what’s a great love story without obstacles? 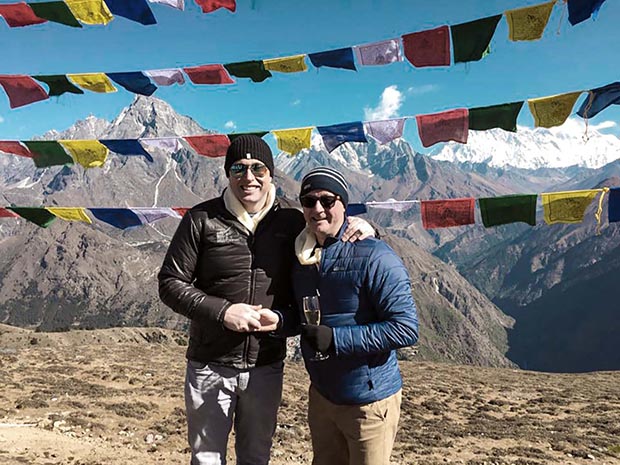 CONNECTIONS OF CONSEQUENCE
Marco and Ryan connected on Gaydar, an on-line dating site that existed long before Tinder. Out of the seven potential suitors the site lined up for Marco, Ryan was the third recommendation.

On that first coffee date something clicked, and within a year Ryan had moved from Christchurch to Auckland to be with Marco. Even in these so-called enlightened times being gay is still a journey say the couple. Wouldn’t it be nice, they say, if in the not-too-distant future, gay kids could aspire to have the life and marriage that their parents did, without prejudice. Haka Tours claimed its first major award when Ryan was named Young Entrepreneur of the Year at the 2010 New Zealand Tourism Awards. There have been 27 awards since. The business has also opened two hotels in Auckland, including a 5-star facility with Mondrian-style LED lighting.

I could walk the Abel Tasman track every summer. Absolutely world-class! An epic road trip around the East Cape is always a massive highlight. A weekend away at the amazing Solscape in Raglan is the perfect place to rejuvenate, eat well and soak in the unbelievable views. 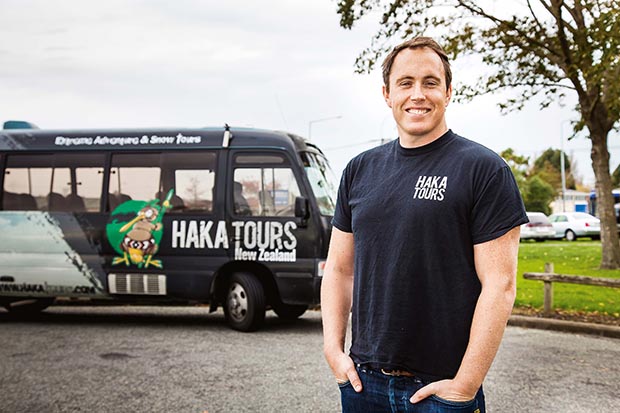 HUNGRY FOR SUCCESS
When Samson Corporation was developing a 5-star green building in Auckland called Ironbank, there was a problem with how to deal with organic waste – and how to remove it from the landfill waste. After much research, it was decided to install worm farms but a suitable system couldn’t be found. Through a friend Marco met inventor Ben Bell, who had designed a prototype worm farm that seemed like it could do the trick. Marco tested the concept and was impressed.

However, Ben hadn’t yet raised the funds to properly launch the concept, so after reading his business plan Marco and a couple of friends invested in the idea and Hungry Bins was launched.