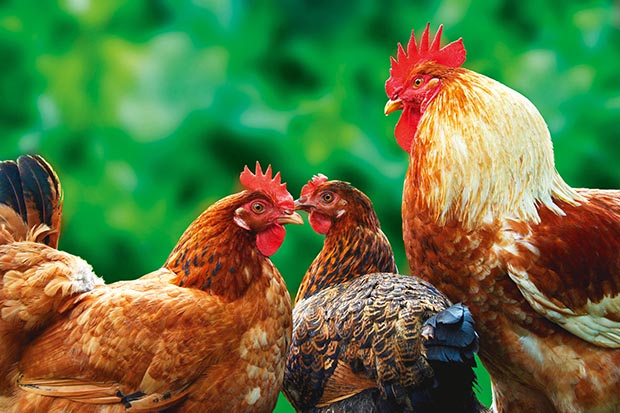 There is the born leader, the second-in-command, the wanna-be and the passive, and it’s important to respect the hierarchy if you want to keep your flock happy.

A chicken doesn’t appear to be a complicated bird, but the social structure of a flock is complex. Scientists can now tell us a lot about how truly fascinating it is, and you can observe these universal behaviours in your own flock.

A flock’s hierarchy is known as the pecking order and finding where they fit within that order begins on around Day 3 of a chick’s life. It starts with jostling for position, squawking and pushing over other chicks at feeding time, turning into feather pecking fights by Day 16. The arguments will continue for around 10 weeks in a female-only flock; expect it to last a few weeks longer if you are raising a group of males.

The pecking order is an instinct, mostly related to feed but also water, nest boxes, perches and dust baths. This is why it’s very important to always have plenty of well-spaced feeders and waterers, an ad lib supply of both food and water so birds lower in the pecking order don’t miss out, and plenty of room for birds to move away from each other and be safe.

Bigger chicks have an advantage, and some individual birds and breeds are more naturally aggressive than others. If you have mixed breeds or birds of different colours, you may find you have ongoing issues as chickens can be racist, adding another level to the fighting. 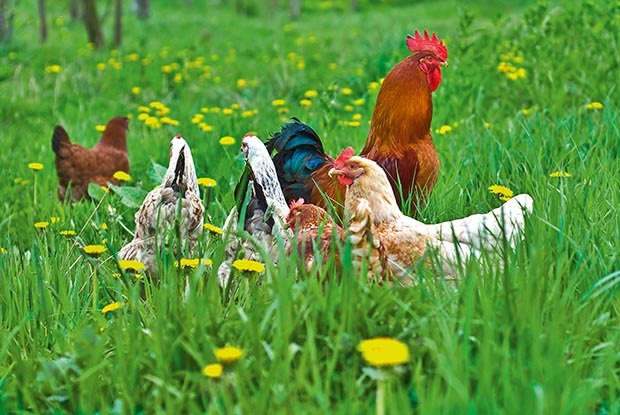 Feather pecking of other birds is the most common expression of dominance (hence ‘pecking order’) and birds usually grab at smaller, more down-like feathers which means birds that are slower to grow their adult feathers can be victimised more.

Combine this natural behaviour with a lack of feed or an incorrect diet (eg, too low in protein, a lack of vital nutrients) or too much or not enough light, and feather pecking can quickly turn to cannibalism. Chickens aren’t vegetarians, and like other animals, once they get a taste of blood, it can quickly be all over for the victim and their body will probably be eaten.

Fighting among male birds is usually much more intense, and roosters are also more likely to keep going until the death.

However, once set, the pecking order in a flock tends to be relatively stable, although maturing birds are likely to have a go at improving their position. Introducing new birds will also upset the order, which is why it’s important to introduce more than one bird at a time (three is a good number) as one bird can easily be overwhelmed by majority. Even reintroducing a bird that has formerly and happily lived within the flock – for example if it has been separated because it has been brooding chicks or suffering from an illness or injury – means it will have to re-establish its position. 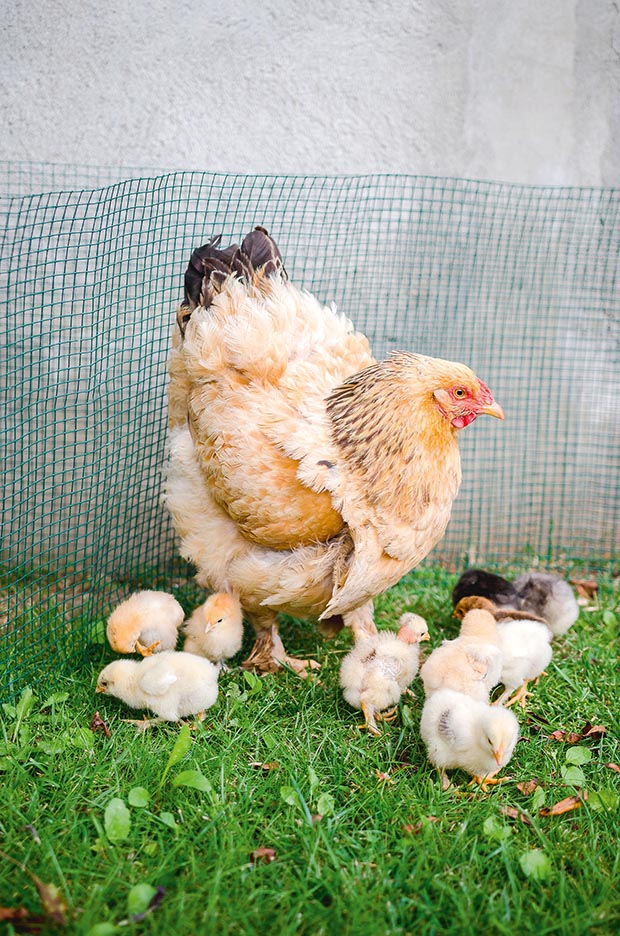 Pecking as a skill is recognised as being species-specific for fowls. A chicken will peck to escape from the shell, to feed, to drink, to obtain and keep personal space and to establish relationships as well as for other reasons. Hens maintain a personal space around their heads and keep a distance from each other by holding their heads at an angle and maintaining a specific body orientation or angle to other birds. If a direct head-to-head stance is adopted, pecking will usually result.

Submission is usually demonstrated by escape or crouching. However, the main purpose of pecking is for eating which is a precisely tuned movement of the head and neck. The food is picked up by one action and swallowed by another.

1. on Days 1-3 there is a strong imprinting or bonding period when the newly-hatched chicken bonds onto the broody hen; in commercial situations they bond onto other objects and, because of this, are more easily trained;

2. this is followed fairly quickly by the development of escape behaviour, a protective mechanism;

3. shortly after, the first signs of aggressive behaviour are seen where two chicks approach each other aggressively but before contact is made they race away, ie escape;

4. this stage is followed by a period of play fights where they spar but do not make real contact;

5. the final stage is where real contact is made, the truly aggressive stage, and it’s from these true fights that the dominant/subordinate relationships are established; the age that this is completed depends on the size and complexity of the flock but in most cases would be sometime after 10 weeks of age.

Once a pecking order is established, birds will live in a harmonious state with no obvious dominant/subordinate relationship until the flock structure is altered. In practice, you need to give consideration to the social organisation of your flock in order to minimise the disturbance of established relationships during times when performance could be affected. For example:

• don’t move single birds from one flock to another;

• if it is necessary to join two groups, do so by separating a pen into two with wire netting and housing the groups, one on each side, for a few days. Once things seem calm after a few days or so, open the netting barrier a small amount to allow the two groups to mingle gradually;

• run males together as a group before placing them in the breeding pens;

• you can place a male in with a group of females to reduce pecking; the best ratio is one rooster per 8-15 hens, with a younger back-up rooster if you are wanting fertile eggs.

2. Young birds will tend to integrate better into a group of adults as they naturally are more subservient;

3. Have a separate run or pen alongside your main run so birds can get used to each other with the protection of a fence between them. This won’t stop birds asserting themselves over each other once they can physically touch, but it’s less likely to be as aggressive.

4. Introduce new chickens at night-time as this can help to minimise fights – use a torch, place new birds on perches or in the coop as birds are far less likely to start fighting at night and tend to be less aware of new additions once it gets lighter.

5. If a bird is injured or becomes sick, remove it immediately or it’s highly possible it will be killed and eaten – chickens are omnivores and do like protein.

Having a human as part of the pecking order doesn’t tend to be a problem if you have only hens, but a rooster can view their human carer or carers as a direct challenge. There are three ways to try to manage it: 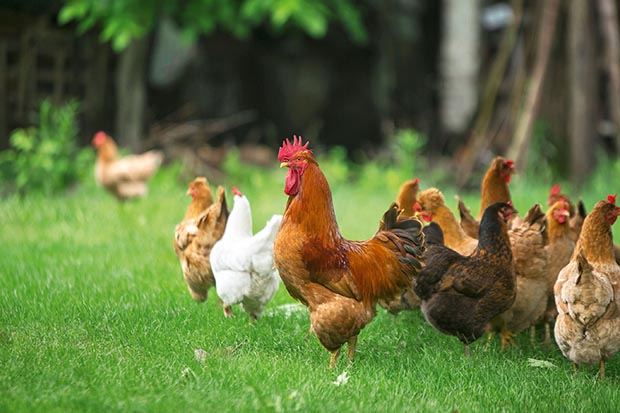 1. Wear protection (thick gloves, safety glasses), grab the rooster and hold it down when it comes after you;

2. Act submissive by putting your head down and backing away quietly at the very first challenge – if a rooster doesn’t think you’re a threat to him, he will often then leave you alone as he views you as lower in the pecking order;

3. Cull him – roosters soon learn to attack any threat such as a stick or raised boot and the thick dew claws on their legs can inflict a lot of damage.

WHAT THE FIRST CROW TELLS YOU

A crowing rooster can be an annoying thing, and there are all kinds of theories about how to persuade a rooster to do it at a reasonable time of day. Most don’t work.

The time a rooster begins crowing depends on his internal biological clock – research shows you can’t trick them, even if you deliberately put them into darkness for 24 hours – but that first crowing rooster tells you who the boss man is, and then who is where in the pecking order after that. 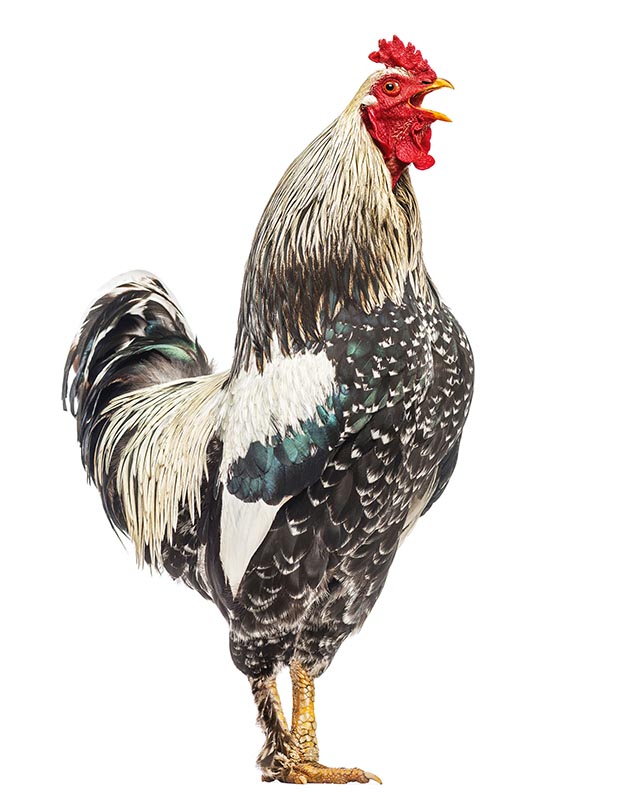 The first morning crow begins at the time deemed by the rooster highest in the pecking order.

Once the boss has crowed, the second-in-command crows, followed by any others in descending order, and roosters know to wait until the rooster ahead of them in the hierarchy has crowed.

When researchers in Japan who tested the theory then removed the head rooster, the second-in-command took over and the rest followed in the same order. 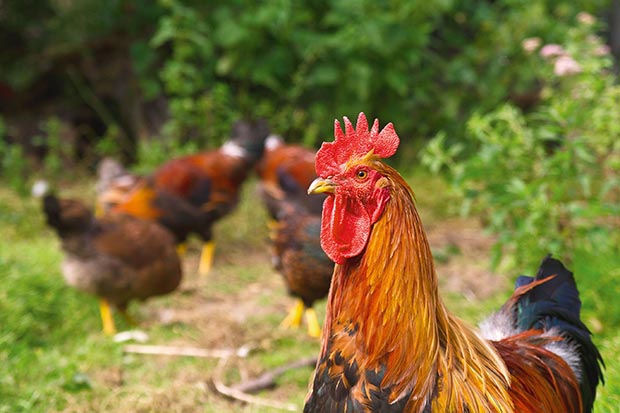 Chickens naturally choose to live in small social groups, up to about 80 birds, but usually in smaller groups. However, there are important aspects of running a flock that will keep the peace. Research has found these are the top reasons why birds may become killers of their own kind:

4. shortage or restriction of feed and water

6. different ages, strains, or colours of birds mixed together

7. changes in environment or management practices

HOW TO BREED MORE PRODUCTIVE HENS

If you’re a sports fan, you know the star players: Sonny Bill Williams in rugby, Irene van Dyk in netball, Tom Brady in the NFL, Michael Jordan in basketball. But star players don’t necessarily make a team an automatic championship certainty, and curiously, it’s the same when it comes to breeding more productive poultry.

US evolutionary biologist William Muir of Purdue University ran an intriguing experiment to find out what would improve egg production in chickens. One selection was of the superstar layers, the nine best individual hens in a large flock which was put into one group; the other was a group that was the best producing of all the groups Muir could choose from. He then bred six generations from each group of hens, using the same criteria to choose the next generation, to see which ones would end up the best producers over time.

The results were so shocking, it’s reported that when he showed them to a conference of scientists, they gasped. The final generation of ‘star’ hens contained only three birds, and they were almost featherless; their success was achieved because they suppressed the productivity of the other hens in the cage. The missing six hens had been murdered by the top three, and even then the remaining hens continued to attack each other to the point where they were almost featherless. Egg production had dropped dramatically, far below the production levels of their superstar ancestors. 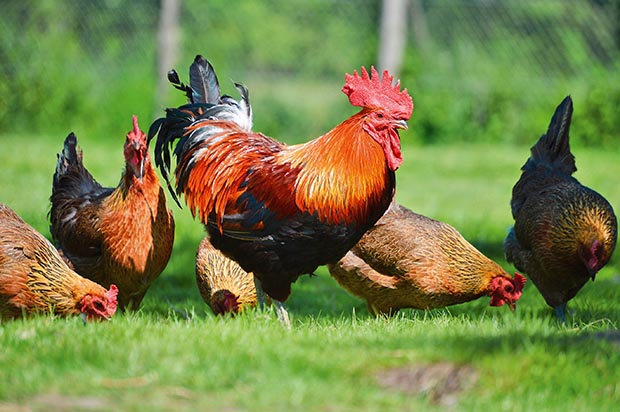 In contrast, the team of hens chosen for their high group production was healthy, fully feathered, all got along, and their productivity had gone up 160% in six generations.

“Muir proved that animals living in groups and bred to be more passive sustain fewer injuries and are more productive. For instance, chickens bred to be less aggressive don’t engage in as much pecking, which often causes severe injury and even death. The energy that animals used for negative behaviour or to avoid such activities is then transferred to production.”

This example is now used by psychologists and business leaders as an example of how creating a team of people that is most productive won’t be a select group of star performers, but the group with different capabilities and a communal approach that brings them together to create something bigger and better.

However, purely in terms of breeding your next flocks for productivity, it’s not always the best layers who have the edge, and taking a group approach to finding the best layers is a better long-term strategy.