Hipsy Scott and her granddaughter Phoenix (8) arrange dyed “bunny tails”, just as Hipsy did when she was little.

There was a young girl who dreamt of faraway lands, who saw roads stretching ahead filled with never-ending stories. Thankfully, the young girl grew up to discover that sometimes reality can be as wonderful as imagination.

This story was originally published in the Jan/Feb 2018 issue of NZ Life & Leisure.

This make-believe story has come to real life in a renovated potato-chip delivery truck. The brilliant blue, higgledy-piggledy vehicle has pretty mullioned windows, picture-book perfect, to peer through. With a slight tilt of the head and a narrowing of the eyes, it could come from the pages of Enid Blyton, Lewis Carroll or Dr Seuss and be a portal to a land where mischievous children have marvellous adventures after tip-toeing away from snoozing adults.

While growing up in the Waikato, Hipsy Scott, then known as LeeAnne, often ran away with fairies and disappeared to The Magic Faraway Tree. However, as time ticked on, she shelved those dreams alongside other well-thumbed Enid Blyton books and settled into everyday life as a dairy farmer and artificial breeding technician. If the ocean is nearby, Dick’s probably already fishing. The couple are “mad-keen fisherpeople” and often surfcast or run a kontiki to catch their fill. Smoked kahawai is their go-to and, of course, Hipsy’s well-stocked kitchen includes a smoker.

Until one day a television story about a local traveling fair caught her attention. This was the life she had dreamt of, life on the road, a dream she had tucked away for a rainy day. Hipsy, 30, with three gorgeous girls (two, six and seven) and at the end of a relationship, thought: “To hell with it. It’s time for my adventure.”

In real life, running away required a little more preparation than wrapping cheese and bread in a handkerchief and hanging her belongings on a pole over her shoulder. “It was a massive decision. I sat my heavy vehicle licence, learned about 12-volt wiring and worked out how I was going to make a living on the road. 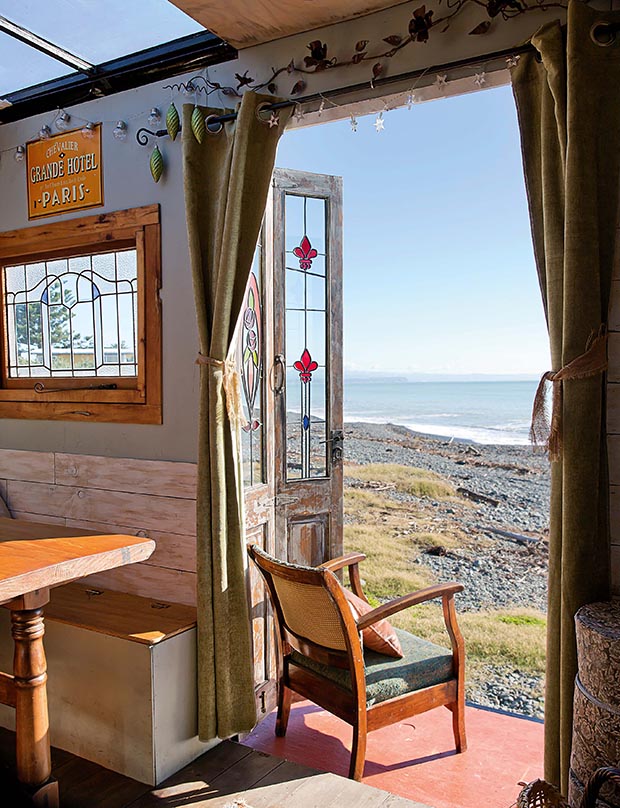 The recycled French doors are thrown open to greet the sun whenever possible. In this instance, it is to make the most of another long Haumoana, Hawke’s Bay, day. The doors were a Trade Me find from Westport, but most of the truck’s leaded light windows are from Christchurch.

“These were the days before Trade Me, so I wandered around various fairs looking at trucks, but the first truck drew me back. I completely gutted it, rebuilt it and off we went, me working as stage manager for a traveling festival, all of us living in the one truck and the girls sleeping in bunks. They loved it, and looking back, what a fabulous childhood they had.” Fabulous indeed, despite Hipsy’s doubts.

“I was never 100 per cent sure about home-schooling, but Hayleigh has a double degree, Letitia’s a chef, and Georgia is obtaining her master’s in graphic design.” 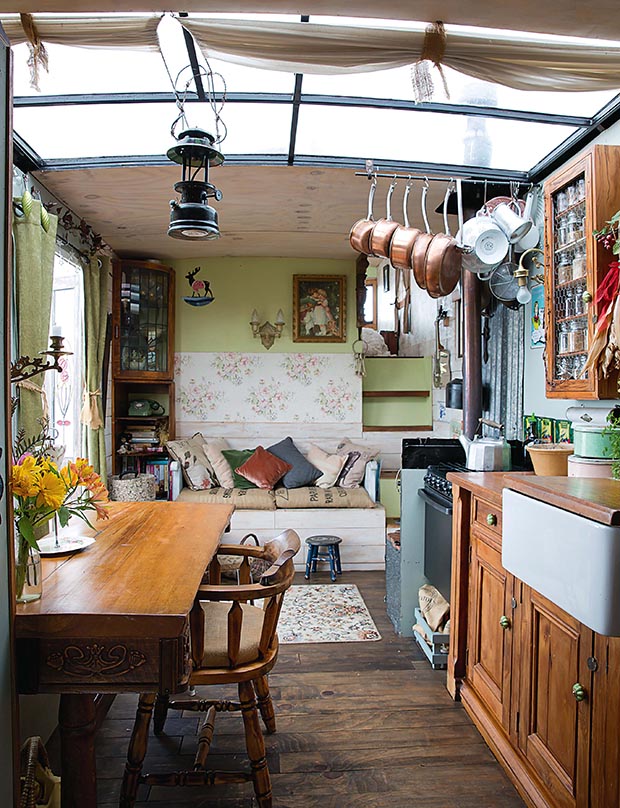 A well-stocked spice cabinet is a must for Hipsy, who grinds all her spice mixes and is never without turmeric root.

In 2001, she met Dick Wedd, a fellow house-trucker, and quite the character. He had two young sons and a dream to run a steampunk-themed café from his vehicle. It was love and, with six children between them (Hipsy’s fourth daughter, Sam, was born in 2000) they became a family of Brady Bunch proportions. (Grown-up Sam is now a singer and hula-hoop artist with plans to become a chef and barber, and is the only child currently following her mother’s nomadic footsteps.)

The story could cheerily end here, but the best heroines must have trials and tribulations before finding their happily-ever-after. At one stage, Hipsy thought she wanted a mainstream life so she set up a clothing boutique in Waipawa in Hawke’s Bay. But she kept yearning for the road. A fire destroyed her second house truck and everything was lost, so she and Dick decided to cool their engines for a while and set up a base in Barrytown on the West Coast. While there, they built their current home on wheels. Hipsy’s office houses an eclectic collection of treasures including her mother’s miniature sewing machine, a vintage handbag from Timaru and a typewriter rescued from Christchurch. The picture The Chess Game was bought for its frame but never removed.

“Living in a house truck is truly a tumultuous love affair. One moment it’s raining and something has broken down, and I’m thinking ‘what am I doing?’ The next moment, the clouds clear, the sun emerges, and we’re parked up with friends, fishing from the stoop.”

Hipsy’s current truck, a 1987 Hino once used as a delivery vehicle for Bluebird, took Dick and Hipsy six months to transform into a home. They were each working nine to five, and at night returned to their second job under pressure to complete the refit before the spring gathering of house truck people. 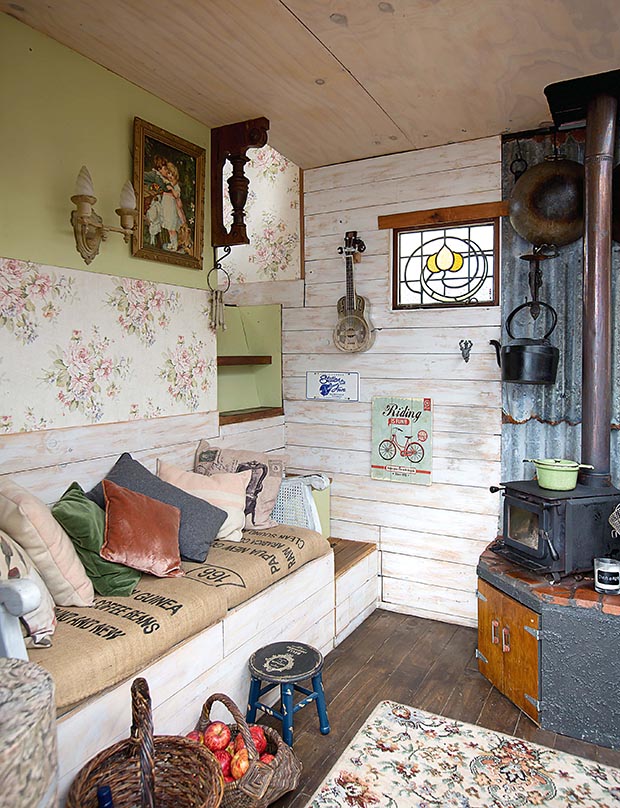 The fireplace is mainly for heating but also handy for whipping up a slow-cooked stew or rice pudding.

“We learnt lessons like never wallpapering when the back is still open to the infamous West Coast rain. Two days before we were due to leave to join the fair, we were still frantically finishing the bathroom. But at 6pm on a September Friday, we pulled up in Christchurch, just in time to meet the other house trucks.”

The interior is accessorized with finds from Trade Me, op shops and vintage stores and, outside, Hipsy embraces colour. The brighter the better. “On the road, everyone is looking at you or hanging out of their car windows taking photos. So we may as well have fun with it. You can’t hide in a house truck.” Almost everything is recycled or upcycled, from the practical wood and bricks to the pretty French doors and leaded light windows. 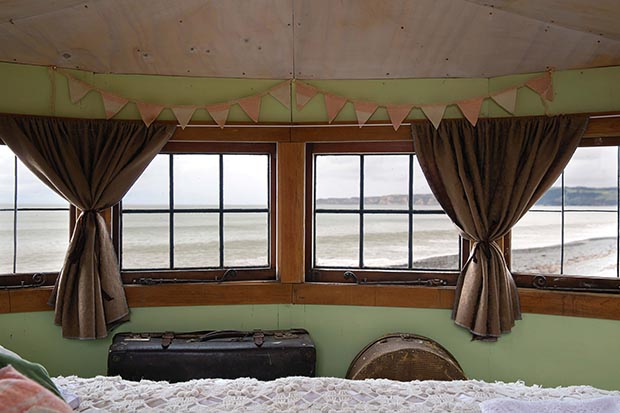 Beauty is the only constant when it comes to the ever-changing view from the couple’s bedroom.

The truck, small and perfectly formed, houses all her essentials… and some extras. “My butler’s sink is ridiculous, but I love it. I saw it on Trade Me and had to have it, but didn’t realize quite how huge it was.”

Initially, she wanted a vintage truck, but luckily Dick put his foot on the brakes. “Our 1987 truck is considered fairly modern but we still have our fair share of problems. Memorably, we had to get towed off a roundabout in Te Awamutu – you just have to smile, wave and roll with it. We drive carefully though and are pulling over constantly to let people past; I have a china cabinet that needs to stay upright, after all.”

From September to April, house trucks, trailers, vans and vehicles travel in a colourful convoy along New Zealand roads like an unseasonably long Christmas parade. Crowds visit the Extravaganza Fair to see the creative crafts of the travelers. Hipsy sells pounamu, handmade and recycled jewellery and decorates customers with spray tattoos – the parent-friendly alternative – while Dick runs his steampunk-themed café truck.

“You have to be sure you can maintain a sustainable business on the road, so you quickly learn new skills.” The group remains close-knit beyond the weekend fair. “We do a lot together; share meals, go fishing. We’re all friends, and we vote with our wheels on important matters.” 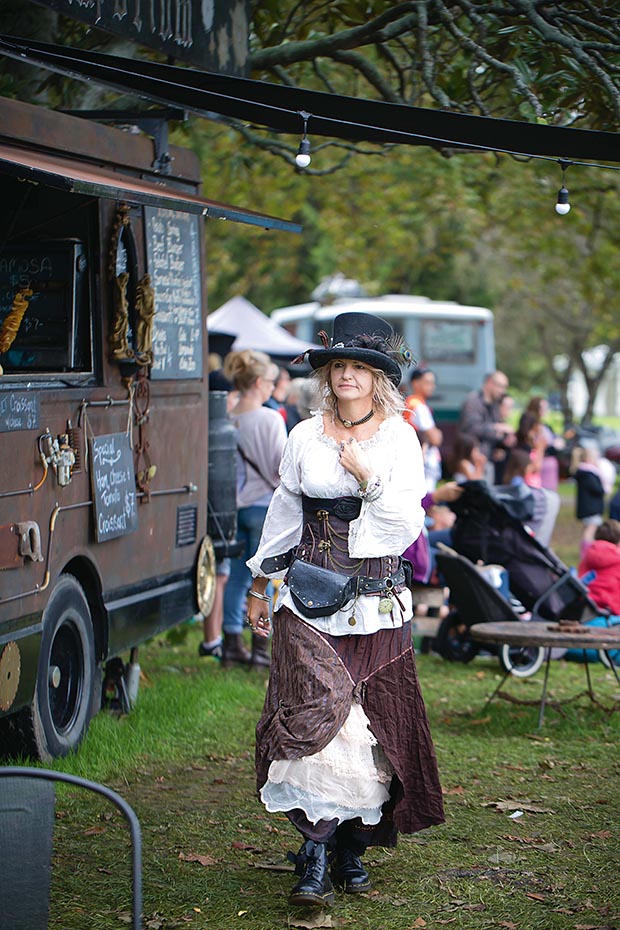 For the record, “Hipsy” was the name of her first house truck, and has stuck ever since.

In April, as the sun goes down on another fair season and the convoy disbands, another chapter in the story of Dick and Hipsy will come to a close. In the off season, the couple visits family and their seven grandchildren. They hope, one day, that future generations might take the wheel and begin writing their own on-the-road stories.

More stories you might like:
Travel essay: How cleft palate operations are saving lives (and smiles) in Kenya

“We will be doing this for as long as we can, hopefully with our grandchildren sitting beside us. They love it – having us isn’t like having normal grandparents.” SMALL-SPACE LIVING
“A house truck is a different kind of investment to a campervan or motorhome,” says Hipsy. “This is your house on wheels, which creates different needs and values to the motorhome market. We have 12-volt electricity and an inverter to convert power from the battery bank and solar panels. 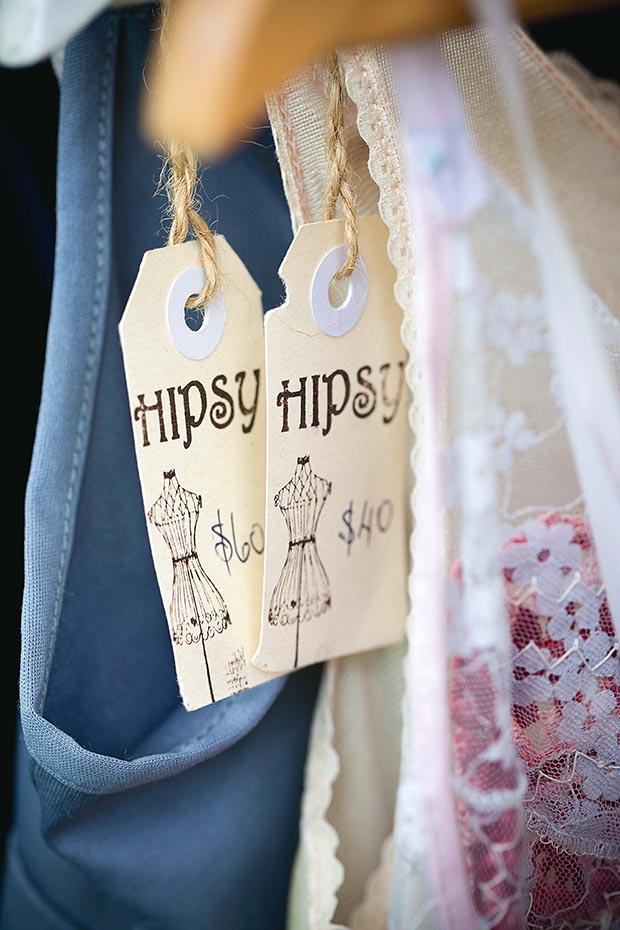 Hipsy sells her range of clothing, including pants made from bedspreads and deconstructed cardigans. Her style is “steampunk”, a fashion that has become more mainstream over the past few years. “Lots of people love it and comment on it – and it’s catching on with the older generation, rather than the young ones.”

We fill our 200-litre water tank with fresh water at each stop – you just have to know where to go. A full tank lasts us a week, and that’s with using our shower. I love my Air Head composting toilet. Heating is thanks to a fireplace (one of my must-haves). My kitchen may be small but I adore entertaining and can easily whip up a 10-course dégustation with my three-burner gas hob and oven – there’s no skimping on the luxuries of life for us.”

ALL IS FAIR
Hipsy and Dick are currently traveling throughout New Zealand as part of the Extravaganza Fair, a collection of 25 to 30 like-minded families from across New Zealand.

Together, they create and operate a traveling weekend market. “The fair has been going three years now, and we find the communities look forward to our visit. We operate as a charitable trust, so nobody owns the fair – if there is money left over, it goes towards a charity chosen by our community. There’s also a big emphasis on being eco-friendly so plastic bottles are banned and almost everything we use is compostable or recyclable.” Hipsy has been face painting for two decades, and is always keeping up with changing trends. Last year was all about Frozen.

Hipsy and company play up their passions; there are clothing stalls and jewellery stands next to palm readers and tattooists of both the needle and henna variety. Circus performers entertain crowds eating ice creams, while other fair-goers try the shooting gallery or take snaps of their kids on the carousel.

Summer will find the travelers spreading their joy throughout the upper North Island, before heading south toward Taupo for the fair’s final dates in April. For locations, visit extravaganza.co.nz WHAT WE’LL BE DRINKING
Hipsy: “Central Otago Pinot Noir, our favourite is from Grasshopper Rock.” grasshopperrock.co.nz

WHAT WE’LL BE LISTENING
Hipsy: “I listen to audiobooks when I’m on the road – one ear on the engine, the other on the story. At the moment I’m working through Game of Thrones, and Paris by Edward Rutherford.”
Dick: “Hipsy introduced me to audiobooks, so currently the Morland Dynasty series – there are 35 books so it will keep me busy.”

WHERE WE’RE DREAMING OF VISITING
Hipsy: “All of New Zealand is awesome but, if forced to choose, we would tend to go to the bush or river over the beach.”
Dick: “The Marlborough Sounds – I have a dream of turning the house truck into a houseboat by driving it onto a barge; perhaps proving that a man could be, or at least have, his own island.”