Huw Evans bought a bundle of houseplants from Trade Me. They’ve grown into a passion that’s taking over his home, inside and out.

There’s a jungle unfurling inside Huw Evans’ Auckland home. Metre-tall philodendrons and a white-streaked Monstera deliciosa grow upwards in a humid bedroom, their botanical relatives spilling into the lounge and even creeping up the palms outside.

Trendy as his home is, Huw doesn’t embrace all horticultural must-haves. “I have absolutely no time whatsoever for succulents, and I just don’t get cactuses. I know, it’s a very polarizing opinion,” says the rental property manager.

Huw’s collection of tropical flora began two years ago after he landed a bundle of houseplants on a Trade Me auction. The 12 houseplants included a fiddle-leaf fig
‘Bambino’, the large-leafed evergreen he blames for his growing collection. “That’s how it all started,” he says. “I suppose I had a thing for fiddle-leaf figs.” 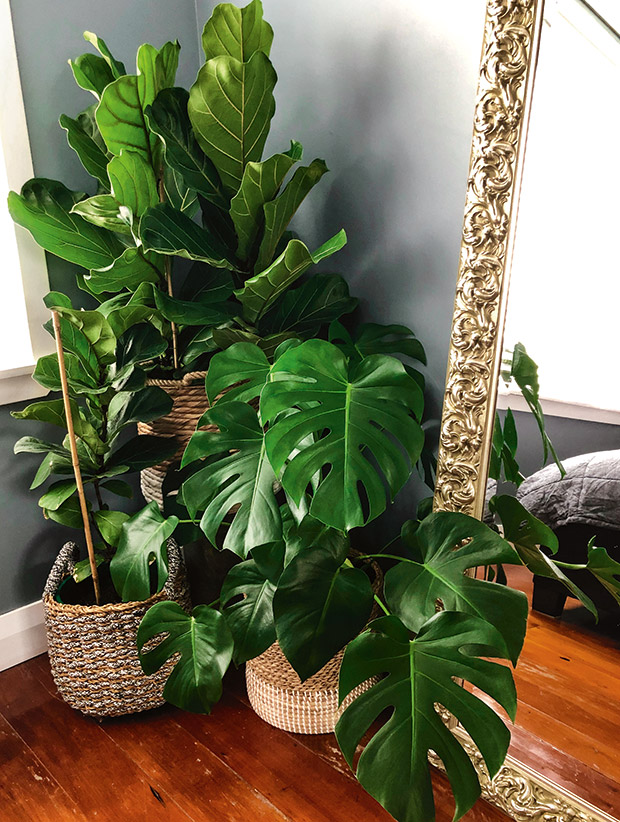 The Ficus lyrata (fiddle-leaf fig), located behind the Monstera deliciosa, started his collection.

His indoor garden expanded as he searched YouTube for new varieties and monitored Trade Me for plants on his wish-list. In late 2018, he got into a bidding war over a variegated Monstera deliciosa that cost more than $1000 and had only two glorious leaves. It is his most expensive plant purchase to date.

But just as plants outgrow their pots, Huw soon outgrew his penchant for buying plants from behind a computer screen. “I wanted to connect with the older collecting community, which is where a lot of the plants we now consider rare or desirable originated. These tropicals have surged in popularity in the past 12 months, but nobody gave a fig about them two years ago,” he says.

In 2019, Huw started an Instagram page called A Guy’s Urban Eden to chronicle his collection and meet like-minded collectors. He slowly connected with botanical institutions, gardeners, houseplant enthusiasts and eventually, the older generation of plant collectors. 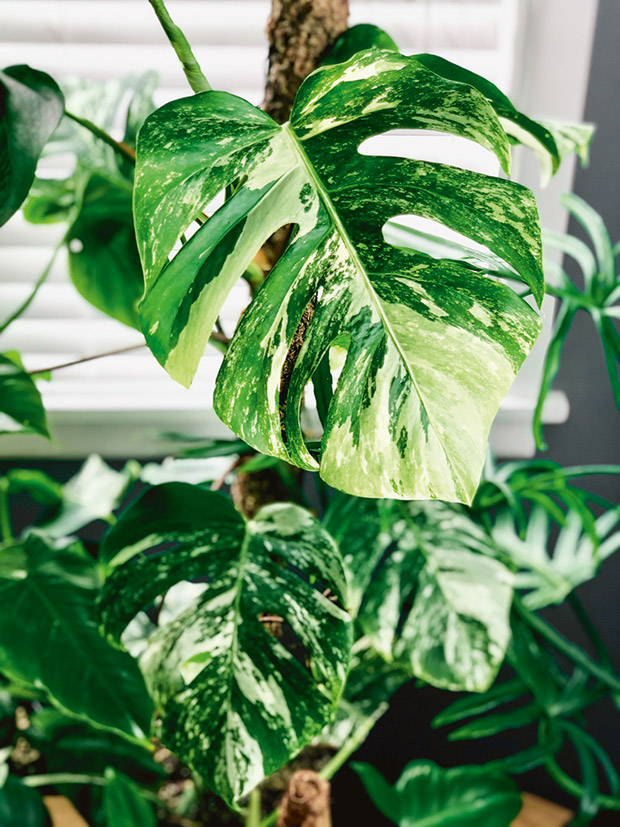 “This hobby is all about learning from others, building relationships and having this free flow of plants. These people collect for the pure joy of it, to be able to grow plants and not think of them in terms of monetary value.”

Swaps, gifts, and generations of knowledge helped grow his collection into the urban jungle it is today. More than 100 tropical houseplants are spread throughout his home and garden — the “fussier” plants enjoying a greenhouse-like bedroom with LED grow lights and humidity control.

Houseplant happiness: A beginner’s guide to transforming your house into an indoor jungle

“I now have plants from my wildest dreams — plants I never thought I would find let alone be given. The older generation thinks the houseplant trend is nuts. They are like, ‘You’re paying $2000 for what?’”

Though self-taught in horticulture, Huw learned how to identify tropical plants long before that first fiddle-leaf fig entered his life. He left Wales (his country of birth) to study marine biology in London, before jetting off to the Caribbean for several years to study coral reefs. After months of diving for up to six hours a day, he turned his attention to local flora.

What a squad. Happy Mondays. 🌱🌿

“I got bored with fish, so I started studying tropical botany,” says Huw. “I think that has always stuck with me.”

His passion for fish and plants was put on hold when Huw took a job as a flight attendant in Dubai. In 2005, he met his then-partner on a trip to New Zealand. Moving to Auckland was his third — and final — international move.

Plants returned to Huw’s life when he bought a home in Auckland. He daydreamed of creating a living wall, perhaps even an indoor greenhouse. When he connected with other collectors, Huw was inspired to explore different aspects of the hobby. Older collectors taught him that some houseplants, contrary to their name, can thrive in an outdoor environment. 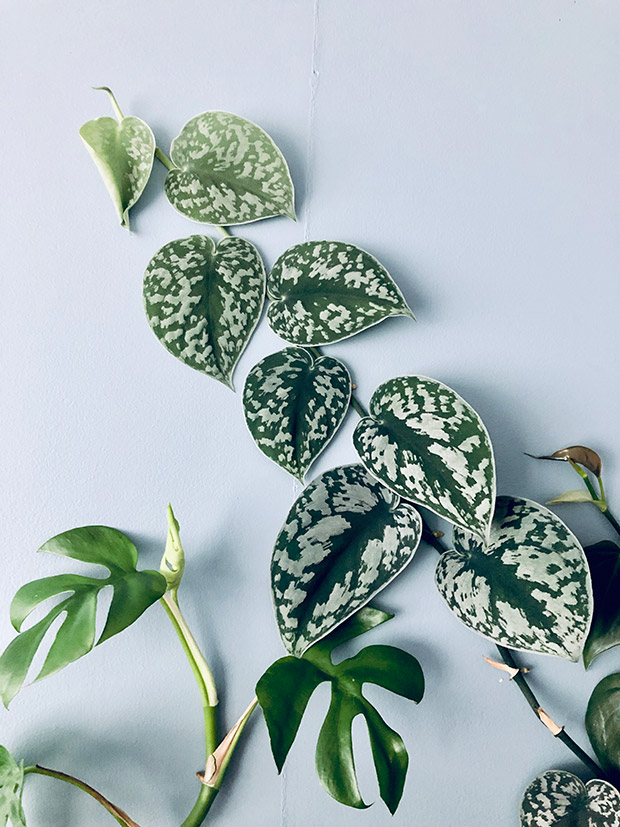 “Many species we consider houseplants can be kept outside because that’s where they originated. It’s just this new trend that has brought them inside. I’ve been doing the reverse, and now my collection is half indoors and half outdoors.

Trial and error wasn’t enough to determine which varieties could cope outside. He used his knowledge of biology to trace each plant’s country of origin to decide whether it would survive under local conditions. He found that many large-leafed houseplants, particularly philodendron varieties, flourished in Auckland’s humid climate. “I wanted to set my houseplants free — to let them get big and beautiful,” he says. Caring for a medley of indoor and outdoor plants doesn’t come without occasional mishaps. Huw once dropped a Philodendron erubescens ‘Pink Princess’, a highly prized variety with pink-streaked leaves, that “smashed into a million smithereens”. Though he has never cried over a dying houseplant, Huw admits there is a distinct heart-pounding moment when disaster strikes.

“I have to think about a plant’s replacement value. If I were to lose it, could I replace it? That’s why I now have multiples of most of my rarer plants,” he says.

Huw is swimming in green, rich only in an organic sort of way. Watering his houseplants can easily eat up half a day, but in the end, that’s the best part. “I never find it to be a chore. I get rewarded with what I love.”

Huw recommends starting with a species that is affordable and can easily be replaced. Philodendron hederaceum (aka heartleaf or sweetheart) can be hung or placed in a pot on a table and tends to thrive when neglected. “Houseplants are generally not mass-produced to be difficult. If they were, that cultivar or variety would soon disappear out of circulation. Let’s be honest, no one wants to keep a fussy plant.

“If it’s cheap, cheerful, and your grandmother once had it, it’s going to be a winner. It has stood the test of time. You can then ease into bigger and better plants.” Celebrating love in a homegrown church: How Felicity Warren transformed her garden into the Martinborough Tree Church