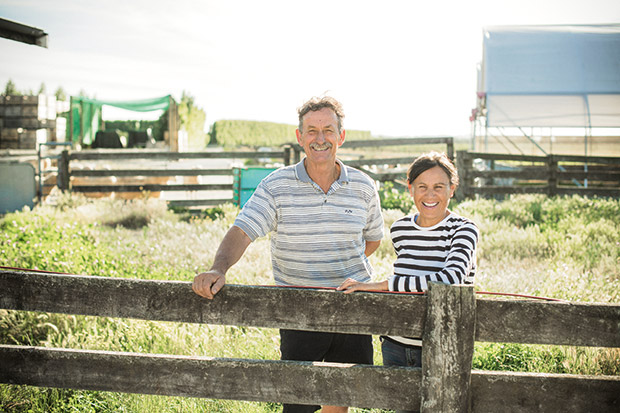 A Gisborne couple spent many years building a farm-to-plate business, now one of New Zealand’s most significant independent brands.

A heart-shaped blue brie, inspired by Valentine’s Day many years ago, is a fitting symbol of the love between two people — one with business nous, the other a creative type — who inspire and encourage each other to live their dream.

Carol and Rick Thorpe, founders of Gisborne-based Waimata Cheese Company, grew up in households where cheddar was the cheese of choice, though Rick does recall a rare wedge of blue vein making it to the family’s dining table. In the early 1980s, Rick was working in his family’s horticultural business, and his wife Carol was a primary school teacher dabbling in cheesemaking in her spare time. They had a baby son named Elm. He was just a year old when Carol and Rick decided to head overseas on a family trip. They went to Wales, keen to meet the man renowned as the father of the self-sufficiency movement.

John Seymour, the author of 40 books, including The Complete Book of Self-Sufficiency published in 1976, lived near Newport in West Wales on a farm that had become a mecca for townies learning how to live off the land. Rick, Carol and Elm turned up for a short visit and stayed for a year.

Carol’s imagination was fired and when the family returned to Gisborne, she began using the cheesemaking skills she’d honed on Seymour’s farm, determined to create a viable operation. In 1994, the Waimata Cheese Company was established, and it wasn’t long before Rick joined Carol in the business. A disused packhouse on Thorpe family land, once busy in the kiwifruit heydays of the 1970s, located on the banks of the Waimata River just outside Gisborne, was repurposed as a factory. The river is of particular significance to the Thorpe family. For Carol, who is of Ngāti Oneone hapū and Ngāti Konohi hapū of Ngāti Porou iwi, naming their new venture, Waimata, was a way of paying homage to their heritage and acknowledging their location.

Waimata has built its business on producing soft, fresh cheeses. “One obvious reason is that we’re not sitting on them for months before seeing any income,” says Rick. The soft white-mould cheeses and the blue brie are cured for 10 days, and turned every other day to ensure the mould distribution is even before being wrapped and dispatched. Blue cheeses other than the brie are cured for up to five weeks, wiped weekly to aid rind development. The range of fresh feta and haloumi do not require curing.

While camembert, brie, feta and blue vein form the basis of Waimata’s cheeses, more recently and increasingly popular is its haloumi. The demand for the unripened, semi-hard cheese is growing as people seek substitutes for meat products, and haloumi now makes up a significant portion of Waimata’s production. Much has changed since Carol and Rick set up their enterprise. Their daughter-in-law Kelly (Elm’s wife) says that Carol was pretty much a one-man-band at the start. “She had a little hatchback modified to include a chiller unit in the boot, and she’d drive to Hawke’s Bay and Tauranga, visiting supermarkets to gain wider distribution.”

Two years ago, the car was retired from service and replaced with a trailer-chiller unit used for the local Gisborne Farmer’s Market, which the family has nicknamed the Cheese Chariot. The car-for-chariot swap shows how far Waimata has traveled since it began. The small artisan operation is a significant enterprise these days. The big break came in 1996 when supermarkets began stocking its range.

Last year, it overtook Fonterra as the largest supplier of haloumi to the New Zealand market and produces several flavours — the traditional, the chilli and the cracked pepper haloumis won gold medals in the 2019 New Zealand Specialist Cheesemaker Association Cheese Awards. Waimata regularly wins awards for its cheeses, most recently being a medalist in the 2021 New Zealand Champion of Cheese Awards. 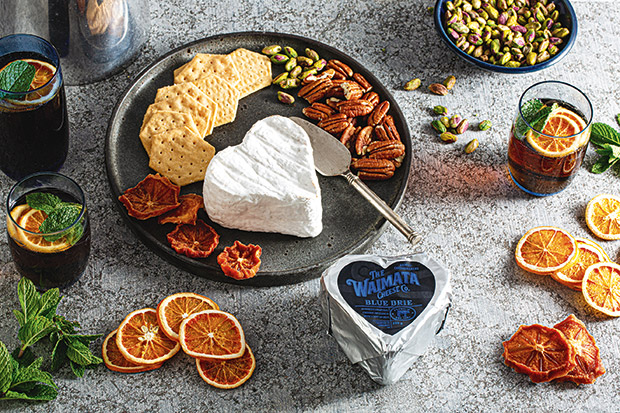 Initially, Waimata had a staff of 10, which has increased over the years to more than 40, including head cheesemaker Chris Duncan, who has been with the company from day one. These days, he has an assistant, Alex Harrison.

The number of members of the Thorpe clan involved in the business has also increased significantly. Elm is plant manager, his brother Luke is accounts manager, and his youngest sibling Daniel oversees the orcharding arm of the operation. Carol stepped back two years ago; these days, she supports Kelly. The future Rick and Carol dreamed of creating nearly 30 years ago is now their family’s reality.

Waimata’s cheeses are made with a plant-based coagulant rather than animal rennet, making them suitable for vegetarians. They are also gluten-free. While Rick shrugs off the suggestion that these choices were revolutionary, it has helped them weather the winds of change over recent decades.

“These days, there’s a lot to consider. It’s tricky with veganism and the anti-dairy lobby,” he says. “There is now a huge array of alternatives to cow’s milk — oat, almond, coconut, to name a few — which certainly makes us think about what we should be doing in the future.”

Three years ago, they decided to convert their dairy farm and milking shed in Manutūkē, to the west of Gisborne, to sheep dairying. It was a bold move, as most of their cheeses are still made with cows’ milk, which they purchase from other local suppliers.

But Rick says it was the right move. “The benefits are nutritional as well as environmental. Sheep cheese has a higher content of protein and calcium than cow’s.”

Their flock is a crossbreed, east friesian and poll dorset. The east friesian is one of the world’s most productive milk sheep, while the poll dorset is also a good milker and noted for its hardy characteristics. The Waimata sheep milk cheeses, launched in 2019, immediately found a market. To date, the range includes sheep-milk camembert, manchego, blue vein, feta, and a blended brie and blended blue. Nothing says comfort food like mac and cheese. The humble offering is near the top of the list of Kiwi family favourites and is easy to jazz up by changing up the varieties of cheese used. A tangy and crumbly creamy blue cheese, a blue brie, and a sheep-milk manchego add zing.

Heat oven to 180°C. Place the butter and flour in a pot over low heat, season with salt and cracked pepper, and slowly pour in the milk, stirring constantly. As the sauce thickens, gradually add the cheeses. Keep stirring until all the cheese is melted and the mixture has a smooth, creamy texture. Add the cooked pasta and bacon and stir gently until the pasta is well coated.

Pour into an ovenproof baking dish, cover the top of the mixture with a generous chunk of grated manchego, and cook for 20 minutes.