Cathy Bouma never planned to have a herb business. Or a block.

All Cathy Bouma wanted for her birthday was a tunnel house. She and husband Alex had struggled to work out where one would fit on their Christchurch section. 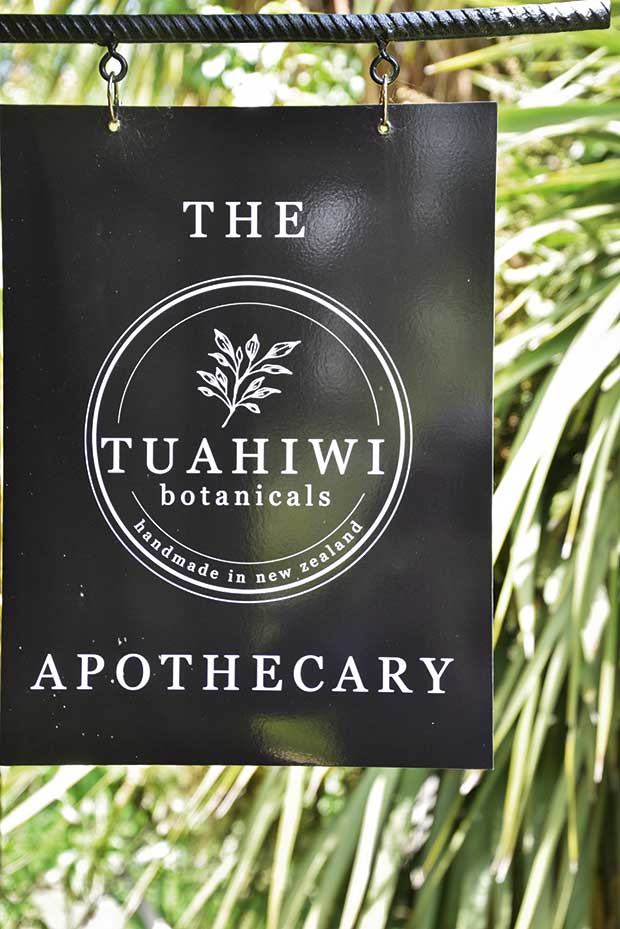 They weren’t looking for a move to the country. But a tip-off from a workmate led them to view a block half an hour’s drive north of the city. When Cathy saw its large tunnel house, it was love at first sight.

That’s how she got a 2ha (5 acre) lifestyle block for her birthday. The couple moved in October 2010, and Cathy hit her first challenge.

“I’d never grown on clay before, because in Burwood it was nice loamy, sandy soil. In the tunnel house, the water kept pooling, so I dug up the soil trying to find out where the leak was.”

She eventually realised there was a clay pan stopping water from draining. The next year, she double-dug the ‘rock solid’ vegetable garden, breaking a couple of forks and spades in the process. 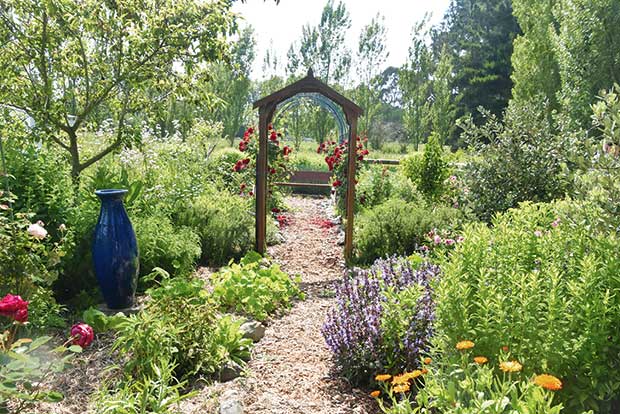 “Once we got through it… everything just grew.”

Cathy wanted to do something productive on their block. She had always been fascinated by herb gardens, ever since childhood. She decided to enrol in a year-long herbal apprenticeship with renowned herbalist Valmai Becker who runs Phytofarm on Banks Peninsula. “I loved it,” she says. “It gave me the confidence to do stuff I wouldn’t have done otherwise.”

Alex suggested she use part of a paddock for her project. It was the start of the three-year conversion of pasture to garden, without using sprays. 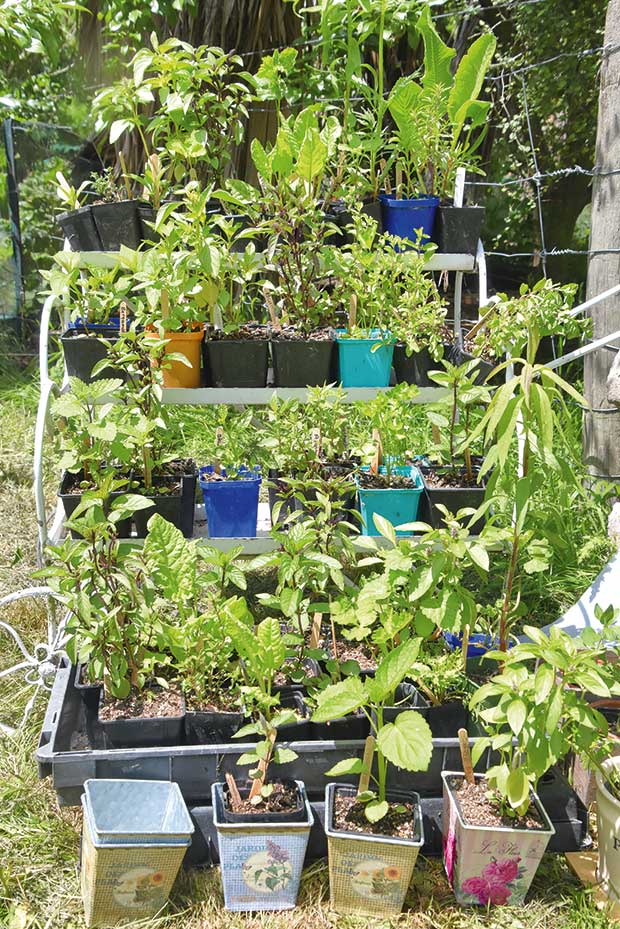 Cathy’s first step was to lay thick, ndustrial cardboard over the area, collected by the carload from the recycling centre. On top, she added compost, using anything she could easily source: grass clippings, leaves, local horse manure, bark mulch, even weed from their pond. Over that, she put down a 20cm-thick layer of pea straw.

“For me the soil is everything. The plants are never going to grow without good soil. There are still perennial weeds, but when I get the soil to a certain level, and it’s really friable, I can get the twitch (or couch grass) out, it’s not a big drama.” 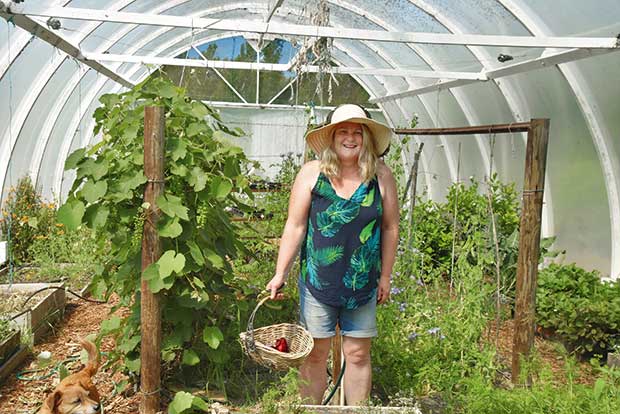 Cathy had no overall plan of what the garden would look like once it was finished.

She planted a production garden, then began making herbal teas, followed by herbal salves and creams. 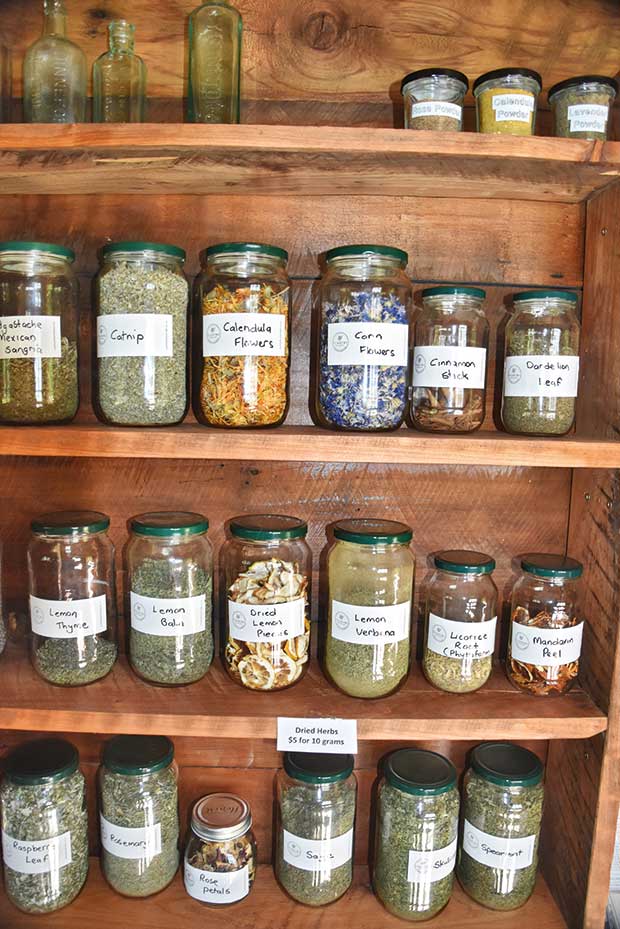 “How can you go wrong with a base of comfrey?” she says. “Comfrey is a great wound healer. Calendula is calming, and a fantastic skin healer. Plantain is great for itchiness (better than dock for stings), and yarrow staunches bleeding. Soldiers used to use it on the battlefield.”

Next, she developed her Herbal First Aid Salve, adding beeswax for a protective layer on the skin.

“It’s a fantastic ‘go-to’ for every kind of cut and scrape and sore thing. My family are quite scientific, they give me a hard time sometimes. But my husband doesn’t travel without it, and even my scientific son puts a little on cuts.”

Cathy’s family built her a drying shed with a solar-powered ventilation system that switches on to expel the air when it reaches 39°C. Her son is working on an online monitoring system.

Cathy initially made products that worked for her and her family. Then people started asking her for them.

“My Herbal First Aid Salve is my best seller, with lots of repeat sales. People have multiple tins of it, one in the car, one in the house etc.”

She developed Beard Oil, a mix of argan oil, jojoba and almond oil to moisturise and soothe itchy skin. It’s her husband’s favourite.

For mature skin, she developed various face and body oils, and a lavender face cream. There’s a natural deodorant range. 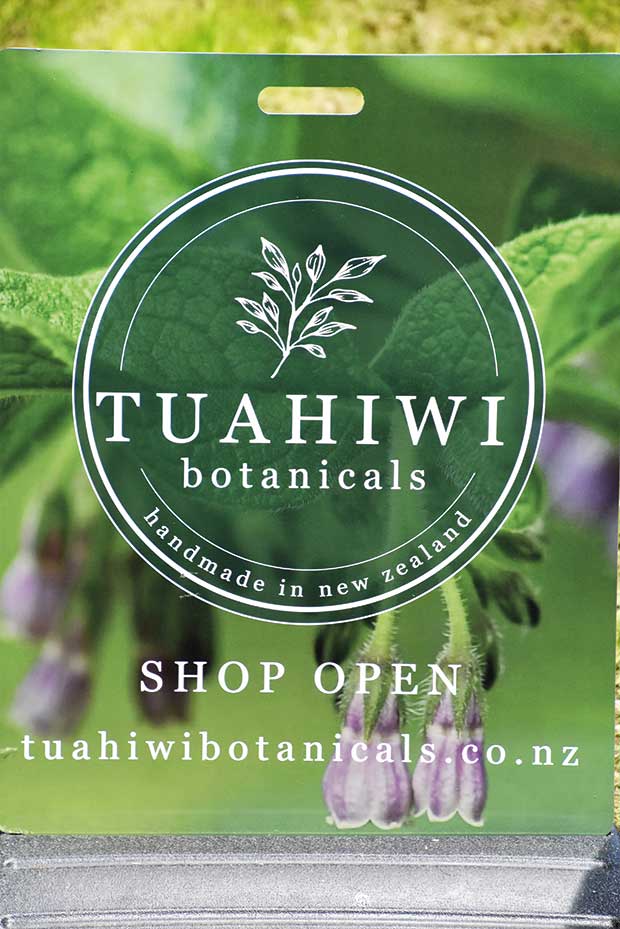 She describes her business demographic as “people like me” and says her initial goal was to cover her costs. 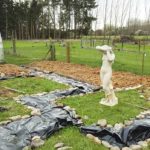 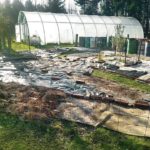 Cathy’s garden is now abundant, but that wasn’t always the case. 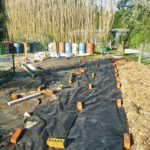 In the beginning, she used layers of cardboard, manure, mulch and weeds to smother weeds and begin the soil-building process. 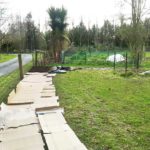 “I now make more than my costs and am able to put some money back into the property. My husband says it’s not a model for making money, but money wasn’t the reason I started. I’d earn more in an office, but I don’t want to do that. I’ve been there. I wanted to do something productive on the land, and I have.

“I’m probably returning more from what I am doing than running a few sheep.”

The garden that began without a concept is now carefully planned. Cathy was inspired by a North Canterbury Herb Society group visit in 2016. “I could see it in their eyes,” says Cathy. “I knew it wasn’t pretty enough, because in a functional garden you harvest everything when it’s at its peak. So, I started thinking ‘this needs to change’. People actually wanted to come and look at gardens, so let’s put some effort into that.”

More stories you might like:
Kath Irvine's pruning fundamentals: When to prune and the three golden rules of pruning

One of the ladies in the group helped Cathy come up with a design. She moved all the production beds out the back and re-planted the main garden for display. 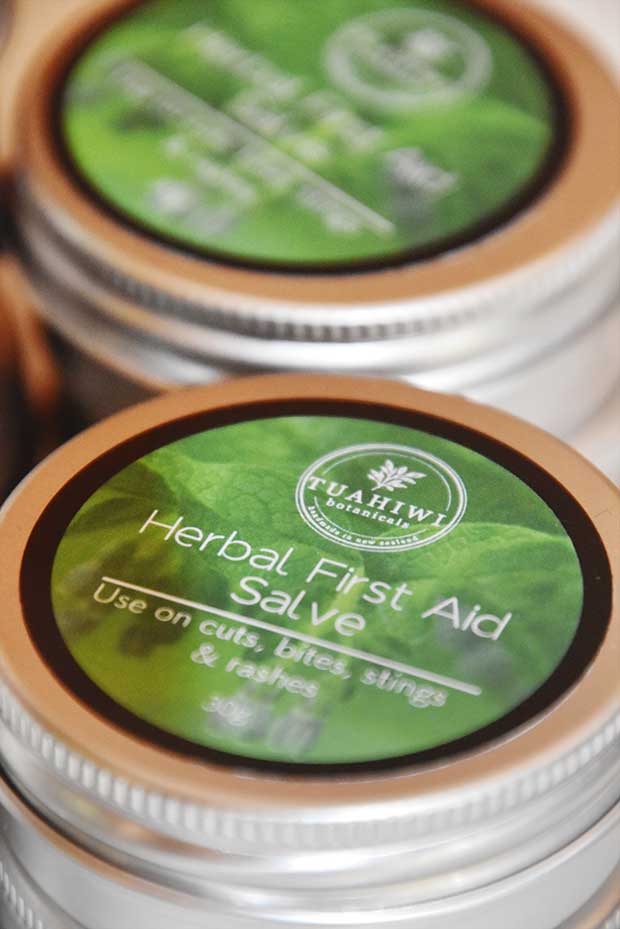 Cathy’s products were inspired by her needs and those of her family.

When the Herb Society revisited eight months later, they were stunned.

Nine years after she fell in love with her tunnel house, it is full of produce and Cathy has no regrets about her birthday gift. 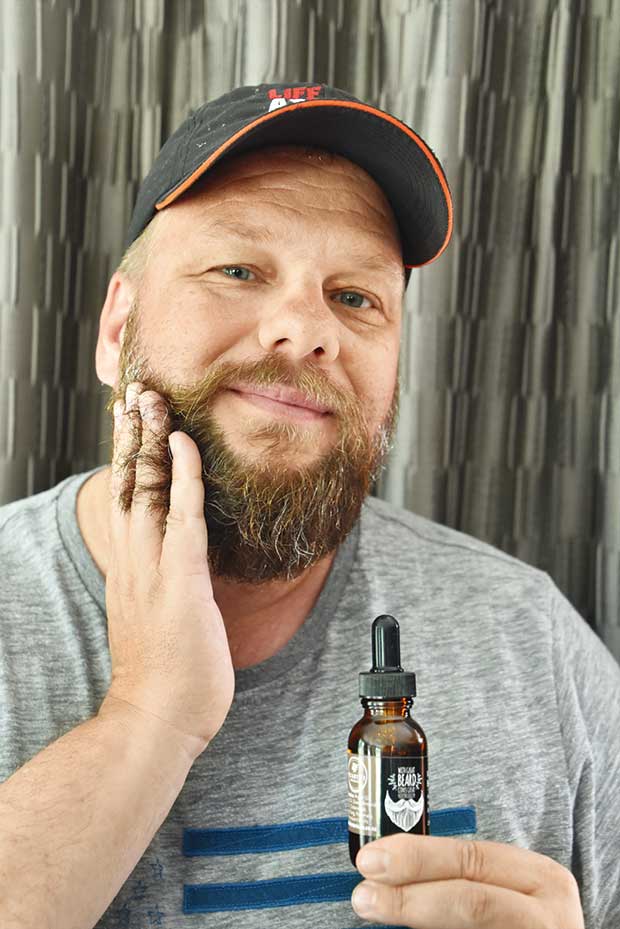 “That whole time from August to November, when I’m intensively growing things, is a real joy to me.”

While her garden is not officially certified organic, Cathy says she knows her organic principles are working.

Before conversion, she tested the soil.

“You don’t want to be growing herbs and find out it was a sheep dip.” 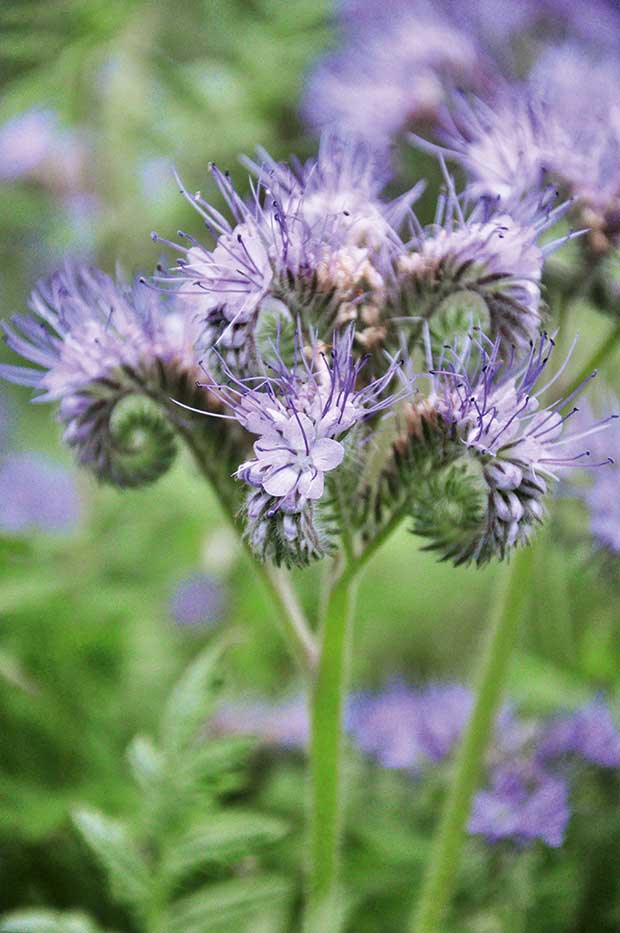 After running her garden for three years along organic principles, she repeated the tests. The readings went off the scale for all their nutrient values, including soil water-holding capacity.

“People ask me, how do you grow lavenders in clay? It’s four years of putting stuff on and building it up.” 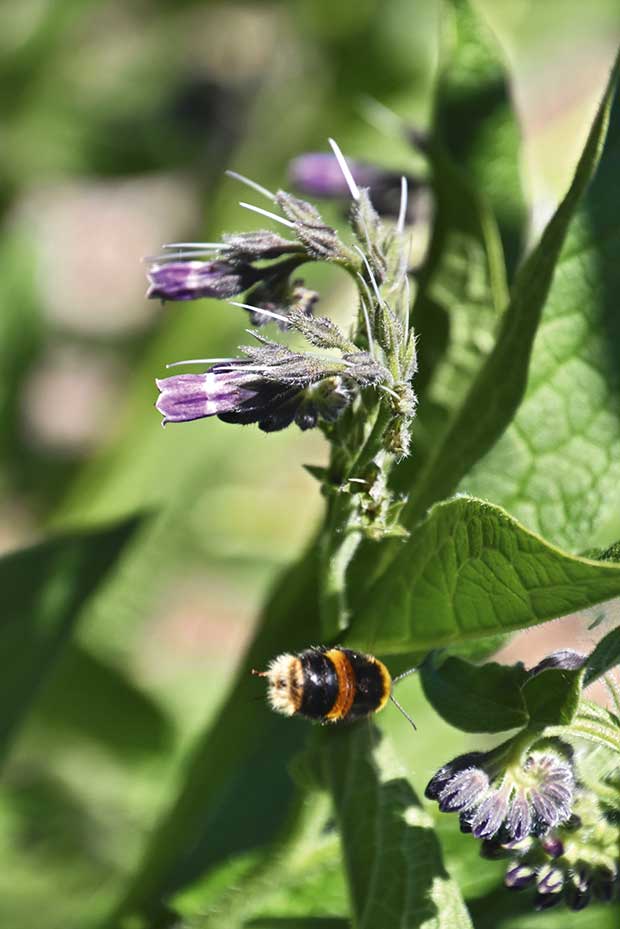 A bumble bee feeding on comfrey.

“In September-October, the aphids are over everything. It’s warm enough for them, but too cold for the beneficials. And then about November, you start seeing the parasitic wasps, and then it’s control! It’s just lovely.”

Her tunnel house is big enough to house ecosystems for beneficial insects. To feed them, she grows phacelia and allows brassicas to flower.

Cathy doesn’t use sprays, even organically-acceptable ones, because she believes they have a detrimental effect on beneficial insects and soil life.