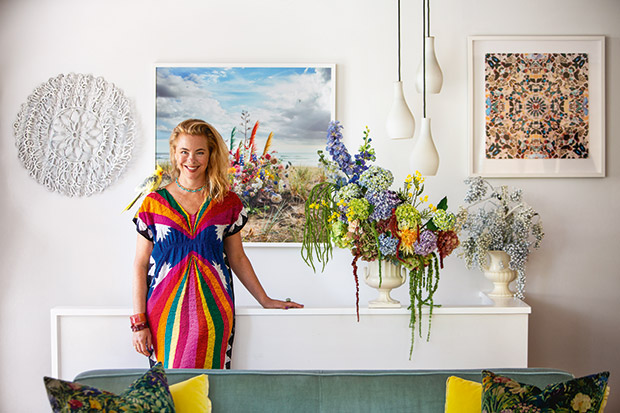 Kōwhai the cockatiel (on Emma’s shoulder) is in colourful company. On the wall is a doily by New Zealand artist Jeff Thomson and a work from Emma’s Interrupted Eden series. The framed butterfly wallpaper (far right) was created by British artist Damien Hirst for a retrospective at London’s Tate Modern. Emma is responsible for the floral arrangements.

Artist Emma Bass finds life-affirming beauty in many places, sometimes even in disorder and decay.

A Christmas past. A child (let’s say she’s 10) is taken by her cardiologist father to Auckland Hospital’s coronary care unit. She has an important job, he tells her. It’s to paint the windows with festive decorations so that patients have something beautiful to look at instead of bland walls and medical equipment.

“I painted baubles and trees and stars on the windows each Christmas for years,” says artist Emma Bass. “Trying to bring some beauty into the lives of patients who were very sick and couldn’t go home helped teach me to look for joy wherever I could find it.” On the easel is a work from Emma’s latest series, A Little Garden. Fake flowers in the arrangement on the side table were also used in Interrupted Eden. The family cat is called Phoebe.

Much of Emma’s working life has been spent casting about for beauty — often in unexpected places. “Humans need beauty; we seek it everywhere: in landscape, music, art, gardens, love and ourselves. When we experience beauty, there is a sense of homecoming.”

At school, she felt like a misfit. While others were praised for being good at sports or maths, Emma struggled. “I think I’m mildly dyslexic which does give you another way of seeing the world.”

Even though she had grown up around art (her parents were collectors), she didn’t have the confidence to apply to art school. So her pragmatic side kicked in. Nursing was an option that not only gave her the chance to help people but, because nurses can work anywhere, allowed her to travel.

It was in this role that she became increasingly aware of the link between art and healing (16 of her artworks are in Auckland Hospital; others have been donated to hospices). In her early 20s, she went to London where working at a large city hospital consolidated this belief.

“The ancient Greeks created peaceful spaces with mosaics and statues to help in the healing of body and mind,” she says. “And Florence Nightingale wrote: ‘Little as we know about the way in which we are affected by form, by colour, and light, we do know this; they have an actual physical effect. Variety of form and brilliancy of colour in the objects presented to patients are actual means of recovery.’”

One memory from her time on those wards involves a patient with chronic ulcerative colitis. “It was the worst I’ve ever seen. He drew a picture of his colon — in luscious green — and put it on the wall of his room. Then he focused on it and on getting well. He unexpectedly recovered in two weeks. The doctors were scratching their heads.” 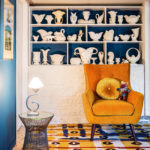 The rug in the den was designed by artist Gavin Chilcott.

The refurbished vintage dining table and chairs were designed in the 1950s by Danske Møbler. 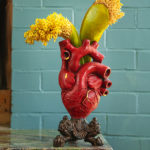 The unusual heart vase was bought online from New York; the lino collages under the sunburst clock in the lounge are by Simon Ogden. Photo: Emma Bass. 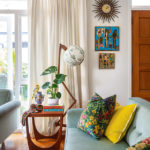 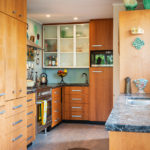 It was also in London that she struck up a friendship with a doctor who had a set up a darkroom in the hospital. He gave her the key. When Emma wasn’t helping people to get better, she was out taking reportage-style photographs, usually on city streets, and developing them back at base. The images, spotted at a Camera Club exhibition by an advertising agency, earned her the offer of professional work. “It was a huge shoot, and I would never have been able to pull it off. So I said,

‘Thank you very much’ and told them no.” But the experience boosted her confidence. She returned to Auckland with art on her mind.

While studying photography at Unitec, Emma convinced an undertaker to let her document the embalming process. She discovered she loved photographing funerals as much as she did weddings. Along with the embalming project, she completed a visual study of the abandoned Carrington Psychiatric Hospital (before it became Unitec in the early 1990s).

It was a grim place. The images she took don’t disguise that but they do reference some of the poignancy: childlike drawings on a wall, almost-pretty architectural features, and details of everyday items left behind. Her work as a student photographer consolidated the link between decay and beauty that is such a feature of her artwork today.

More stories you might like:
Kelly Wilson shares what she learned camped out in the wilderness studying horses for her new book, Wild Horses of the World

But first… a detour into the world of celebrity portraiture. As an emerging photographer, Emma lugged her portfolio around magazines to ask for a break. It worked. Over the next couple of decades she progressed from photographing businesspeople for trade publications to shooting big-name celebrities for high-profile consumer titles. 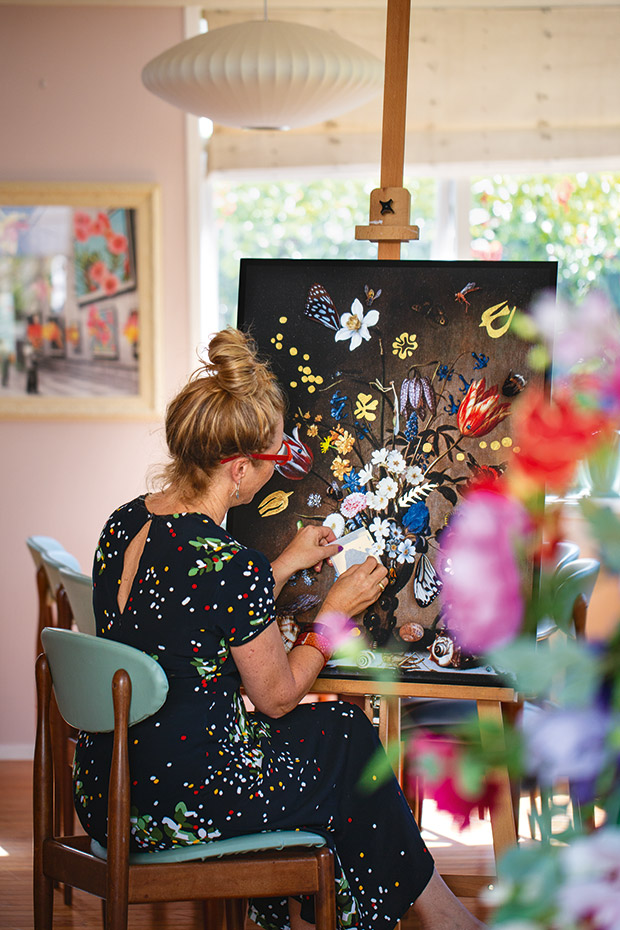 24-karat gold leaf is added to a photograph in the A Little Garden series. “I’m entering the second phase of motherhood and life; this is a moment of change for me,” Emma says of the new work. “I want to honour my inspiration. I wanted a completely fresh approach.”

One such portrait is of Peter Jackson, looking alarmed, with a wētā stuck to his face. A commission from the United States magazine, Entertainment Weekly, it was taken at the beginning of her career.

“They wanted a conceptual image and I had to fly to Wellington where I had 15 minutes with him. I had to take in props and didn’t have a clue, really, but thought, ‘Weta Workshop… wētās’.” Emma unearthed two — Wendy and Wayne — one dead, the other alive.

“When I walked in and told him what I wanted, his response was basically, ‘Over my dead body’.” Panicked, she says she had no idea what to do. She still isn’t quite sure how, but she managed to get the wētā onto his cheek “where it stuck”. Gathered over several years, Emma’s extensive collection of vases from all over the world, including many by ceramics manufacturer Crown Lynn, is displayed throughout the home. At last count, there were more than 230. On the wall is a Jeff Thomson flower arrangement and artwork by Tan Vargas.

“I kind of remember throwing it at him. I don’t understand why he went along with it since he was so against it. Maybe it was because I was so young”

She has also photographed Sir Edmund Hillary and Jonah Lomu not long before his death. Lomu looks bone-tired and holds his head in his hands, almost shielding himself. “He knew he was really sick,” says Emma. Both photographs represent career highlights. “They were a privilege.”

Yet all the while, the need to express herself beyond the commercial was constant. “Creating beauty is vital to me. It makes it possible to cope with the less-pleasant aspects of daily life and the escalating world troubles. I see the creative process as one of the purest ways to connect to my truest thoughts, hopes and emotions.” 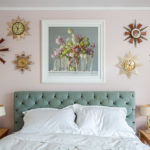 Vintage clocks from all over the world hang in the house, including in Emma’s bedroom. The floral portrait above her bed is called Paradise Found.

Emma painted the scene of Mount Eden in the sunburst frame. 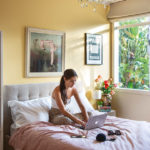 Directly behind Olive is a collage by United States artist Julia Lillard and, to the right, a work by Billy Apple. 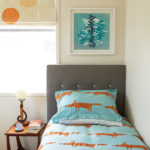 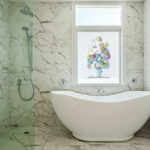 One of Emma’s photographs was printed directly onto glass “to give us something beautiful to look at while in the bathroom”, she says. “The shape of the bath also reminds me of a vase.”

When her marriage broke up, Emma became a single mother to Olive (now 18) and George (10). “Good often comes out pain,” she says. “Throwing myself into my art helped me survive that time.”

Her first major exhibition explored floral arrangements that were falling apart and captured the perfect imperfection in decaying flowers. “To me, a flower arrangement looks more interesting and more beautiful once it has demised somewhat. Flowers reflect our mortality. I think people were very reassured by the images because they were saying, ‘Hey look, we are all dying, and life isn’t perfect.’ The flowers are on the turn, and you can see all that, but they are still beautiful.” 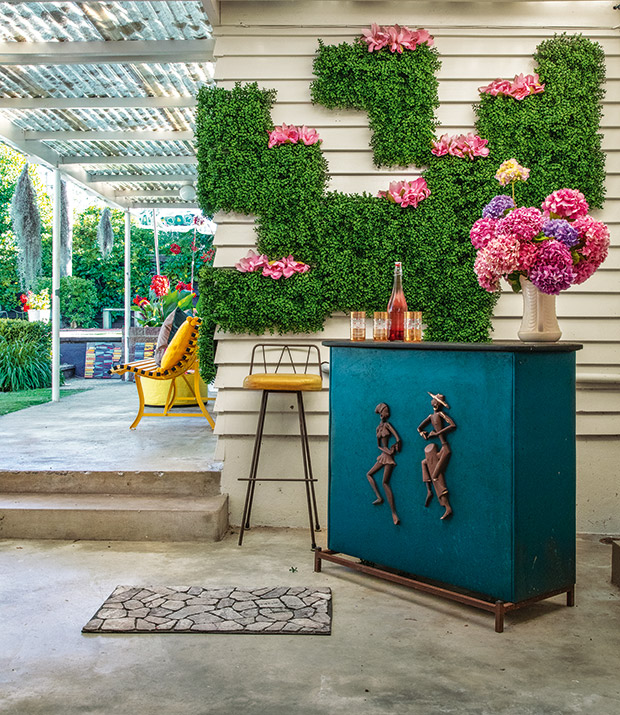 She now works full time as a photographic artist and much of her work is shot at home in Mt Eden in a 1950s house she adores. “It’s a wonderful house,” she says.

“And it has been a sanctuary – my place to create and to cherish family and friends.” 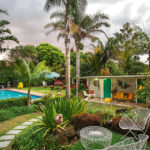 Friend (and renowed caterer) Grahame Dawson helped Emma with her garden, including designing the floral installation above the bar. The pūriri moth on the wall of the pool house is by Jeff Thomson. 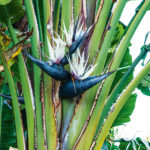 Emma is an admirer of the Strelitzia Nicolai, or giant white bird of paradise (below left), flowering by the pool. 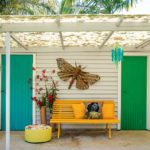 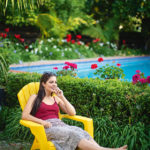 Initially owned by the parents of dancer and choreographer Candy Lane, it was also the scene of many parties. “I’m told they wore a patch out of the carpet dancing the twist,” Emma says. “I can feel the happiness and energy in the walls.” 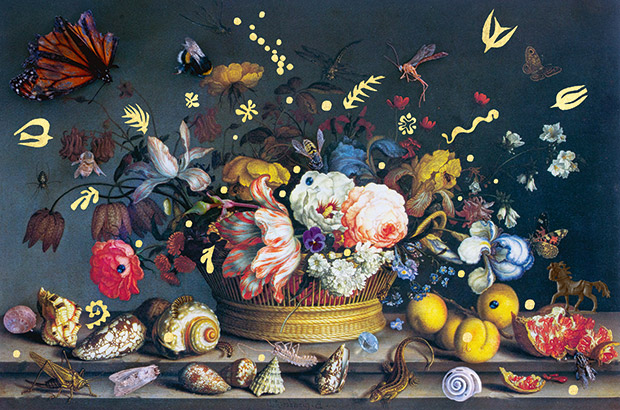 Emma Bass’ latest body of work deviates a little from her other collections. Although the subject is still flowers, A Little Garden blurs the boundaries between painting, photography and collage. Gone is a central vase atop a ledge.

In its place are bouquets created by layering artworks by famous 17th-century Dutch artists such as Bosschaert, van Aelst and Breughel with objects — ranging from jewellery to plastic children’s toys — and shapes gilded with gold leaf.

“The 24-karat gold-leaf shapes are replicas of Matisse’s cut-outs, and respect his artistic endurance,” she says. “He made them while incapacitated. Knowing they were created from his sick bed, reiterates for me the healing power of beauty.”

A Little Garden runs from 25 February until 15 March at Artis Gallery, Parnell. artistgallery.co.nz