A creative and artistic grandmother’s blue-toned gift is one that keeps on giving.

“My grandmother Rhona was a creative soul of small stature with a great presence. I get the feeling she was a rebel. She divorced her first husband and fobbed off my father onto a great aunt for much of his youth. She was an artist and her house always smelled of the frankincense oils she used to thin her paints,” says Rae.

Rhona passed away when she was 83 years old, and Rae was just 15 — an age when she felt she was only beginning to appreciate the wisdom and insights her grandmother had to pass on. But Rhona transferred a tangible gift, too. Her 1966 Hillman Imp became Rae’s cherished set of wheels.

“The Imp is my love connection with my grandmother. She lived in Kaiapoi where her driveway was a carpet of pansies. The Imp was parked in her carport and she’d open its boot in the afternoons so her two cats could lie in there in the sun.” 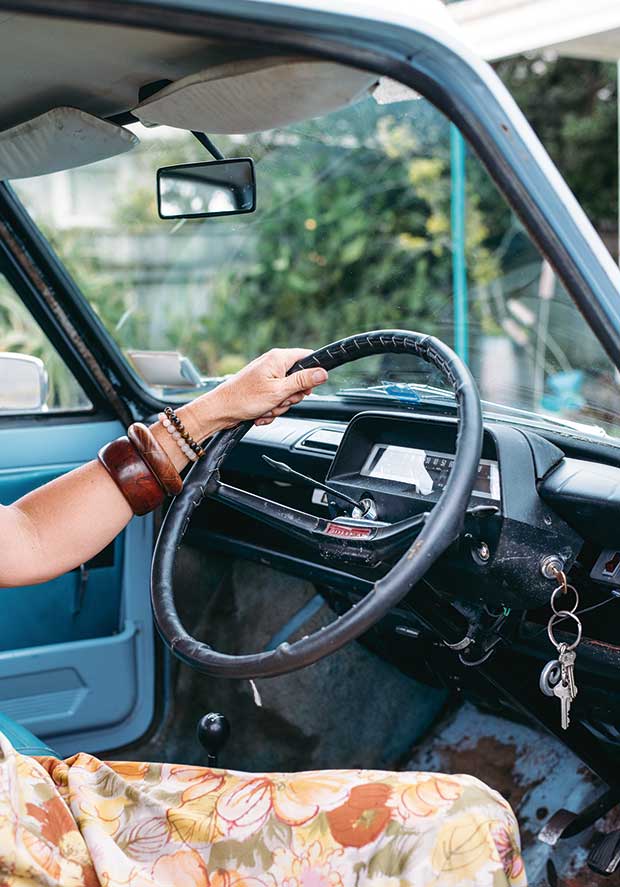 Rhona had bought the Imp new from a Christchurch dealer in about 1966, it had been imported and assembled by Todd Motors, and was immaculately kept.

From a quiet life in Kaiapoi to excited schoolgirl sorties in Christchurch, the Imp’s life changed gear once Rae had the keys. 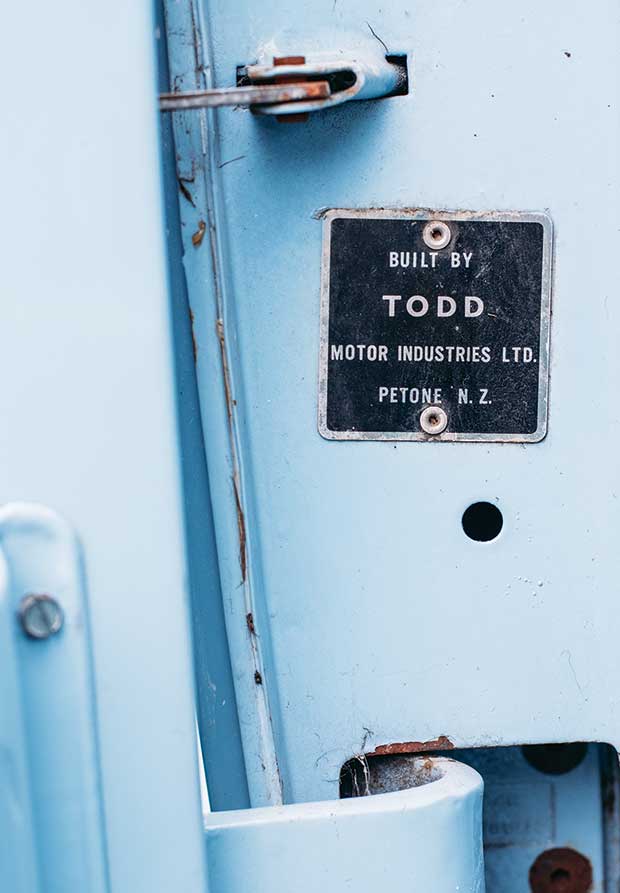 “When I learned the Imp was to be mine, I had driving lessons and once I had my licence it was all go. I remember five or six of us piling into the car in our school uniforms on several occasions. I still get messages on Facebook from old friends saying ‘can’t believe you still have that cool car’.”

Rae says the Imp has become part of her history and memories. It used to grind over the Kilmog on the way to Dunedin when she headed south to study design and marketing at the University of Otago.

“Dad put a block of concrete under the Imp’s bonnet to help stabilize it.” Then there were ski trips to Temple Basin with snowboards strapped to the Imp’s roof. And the case of an empty petrol tank at Arthur’s Pass.

“It’s been there for me through school, university, ski trips, flatting, marriage and now it’s with me by the sea where my bach is the same era as the car — they almost match each other.”

Heading along the waterfront at Haumoana, Rae says there is a joyousness that accompanies getting behind the wheel. 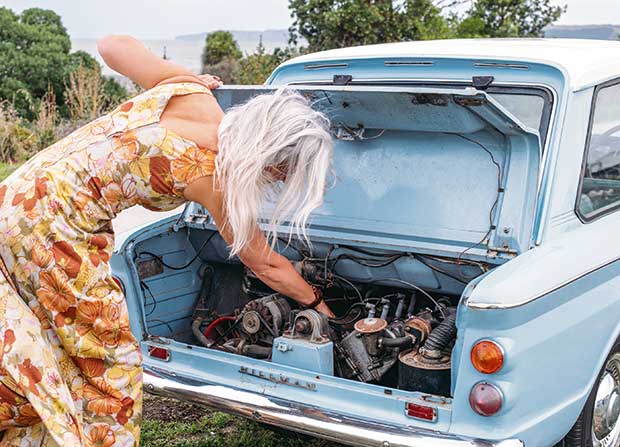 “I always want to put my foot down and go for it. It gives you that light-hearted feeling. The Imp’s top speed is about 80 kilometres an hour. I’m always holding up traffic on the way into Napier, but people wave and smile.”

She says the car is idiosyncratic to drive and noisy. “The speedometer needle waivers all over the place, it sits low to the ground so it rattles like mad, it tends to stall if you haven’t got the revs up, the gears are crunchy, and the front wheels look as though they’ll fall off. 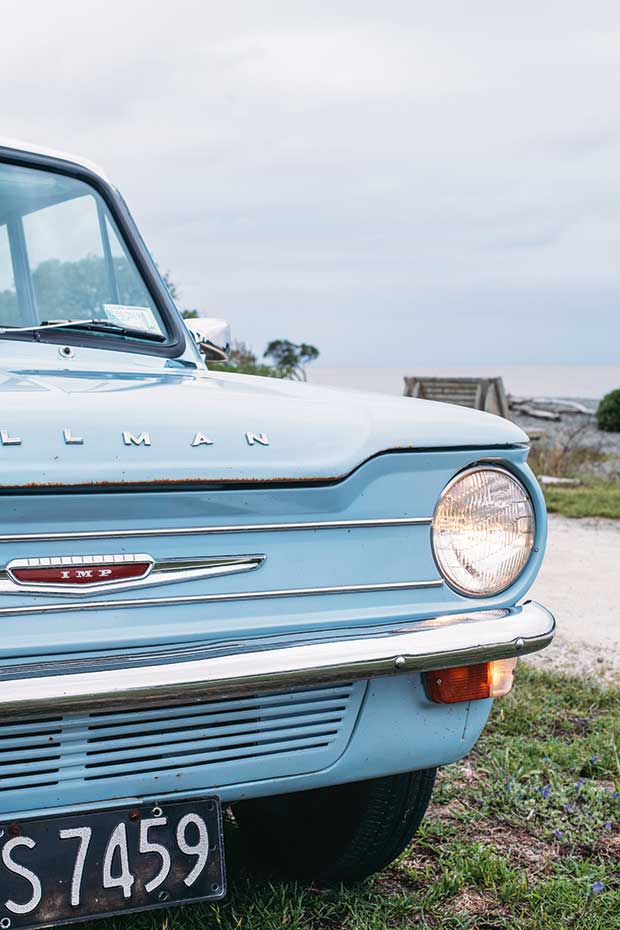 “The seat-belt clips are an IQ test, the horn is cheeky, you have to use your hand to raise or lower the front left-hand window, the windscreen wipers are semi-functional, and there’s no heater. But it’s very economical and costs only $40 to fill. It has a wee bit of rust. I love treating it to a shampoo and polish.”

More stories you might like:
This Waiuku business has mastered the delicate art of breeding bumblebees and insect predators

Rae now drives the car during the summer months, and in winter it goes into storage. Her year-round daily drive is a late-model Mitsubishi Pajero that has served her well during a decade of equestrian dressage.

Although not mechanically minded, Rae says vehicle aesthetics were on her radar growing up. Her father was a BMW man who regularly changed the model of his car. 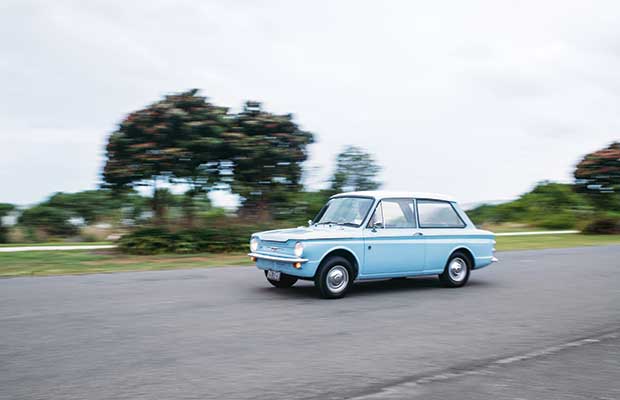 After Rhona died, he bought two blue Hillman Imps having spotted them for sale in the newspaper, but they were never held in such high regard as Rae’s little legacy.

Its poor-quality parts were blamed on an inexperienced workforce of former shipbuilders at Hillman’s new factory near Glasgow, coupled with a rush to release the Imp onto the showroom floor. But the possibility of a little slack-handed Scottish artistry could never dent Rae’s enthusiasm for Rhona’s gift. Fifteen years ago, she reconditioned the engine and repainted the Imp’s exterior in its original colour. The interior is untouched. Yes, there has been the odd glitch with the cooling system but (fingers crossed) all is well, and over a 53-year trajectory, its maintenance record rates as tops.

Since her Christchurch schoolgirl days, Rae has been “the world’s worst maître d’ at a five-star hotel in Vail”, a wrangler cowgirl at Colorado’s Beaver Creek, a nanny in the Cotswolds, and a girl Friday in London before embarking on her profession in graphic design — first in Sydney and later in Christchurch.

Now she works full time on her artistic career. She’s represented by 14 galleries nationwide with work focusing on large resin and ink abstracts. 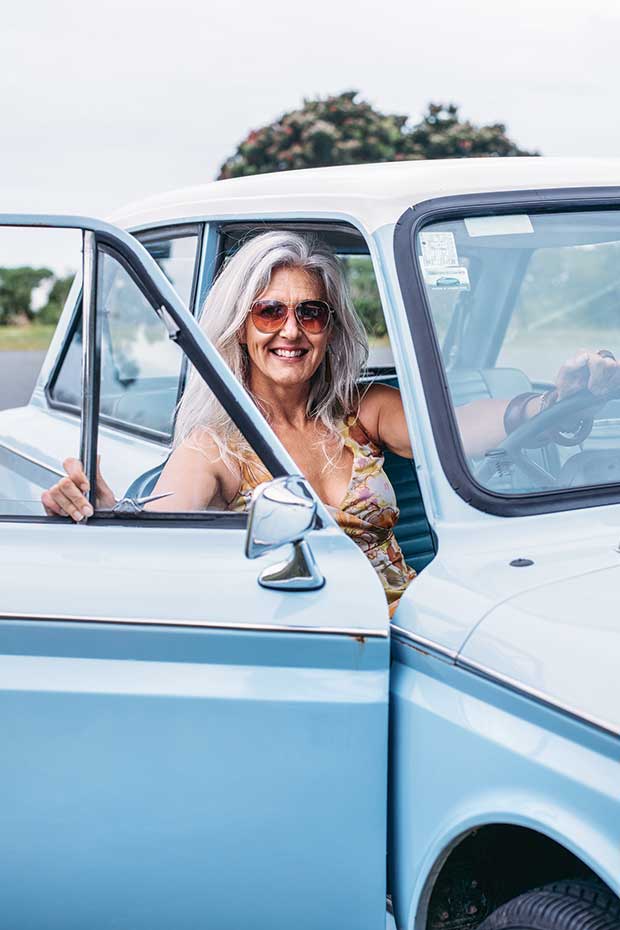 “I often think of Rhona when I drive the Imp. Its smell is still so evocative of those times when I would stay with her in Kaiapoi watching her paint. In the mornings, each tucked up in our single beds, we’d listen to the children’s stories on the radio.”

One Imp, one family, two careful and creative owners — Rhona and Rae.

“I’m so lucky to have had Rhona’s car and to have increasingly felt the imprint of her attitude to life on my own journey. She would say, ‘Don’t ever stop being adventurous, live your life without regrets — that’s when the magic happens.’”