The first solid clue comes at the caravan park in Mingenew in Western Australia’s wheat belt. Word gets around that the lady at the tourism bureau in the small town of Morawa, 60 kilometres away, can provide details of the possible location of a very special plant. The chase is now on in earnest. From Mingenew it leads to Morawa and then on to Canna. Canna is no more than a grain silo along a train line, a few small houses and a Landmark grocery store. There, next to a red telephone box, is a blackboard with the following information: “Wreath flowers – 1.6 + 6km N. on NE Canna Road (see map).” Below the blackboard, tucked under an honesty jar, are photocopied maps. Thanks to a resident flower enthusiast, the search for a very elusive plant is nearing its end. A few kilometres on and true to the blackboard’s promise there they are, marked by a white plastic barrel on the road side: rings of delicate cream-coloured flowers with blushed tips growing on the gravel shoulder of the road – wreath flowers or Lechenaultia macrantha. 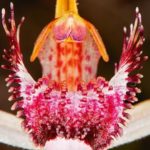 A spider orchid in detail. 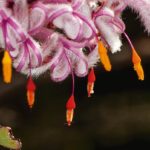 A colourfu anthers of a pixie mop flower. 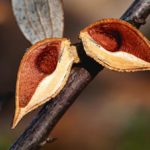 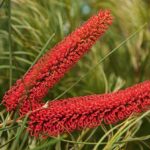 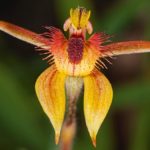 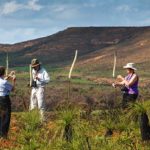 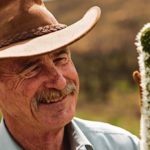 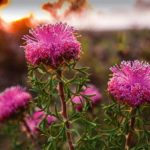 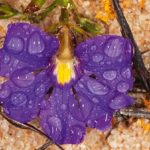 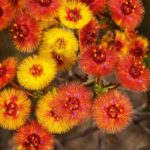 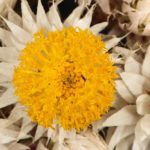 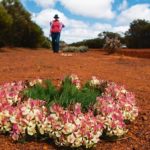 A ring of a wreath flowers. 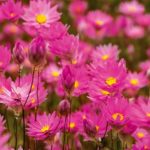 A mass flowering of pink everlastings.

The wreath flower is a famous trophy flower, sought after by those who get their kicks out of chasing rare and unusual plants. I’m one of them and Western Australia during the wild-flower season is heaven. Australia’s largest state boasts more than 12,000 species of wild flowers. More than 60 per cent of these plants are found nowhere else in the world. The elusive ring-shaped lechenaultia is one of them. The challenge for flower chasers is not just to find one, it is also to get the timing right – its flowering season varies from just one to four weeks, at best. 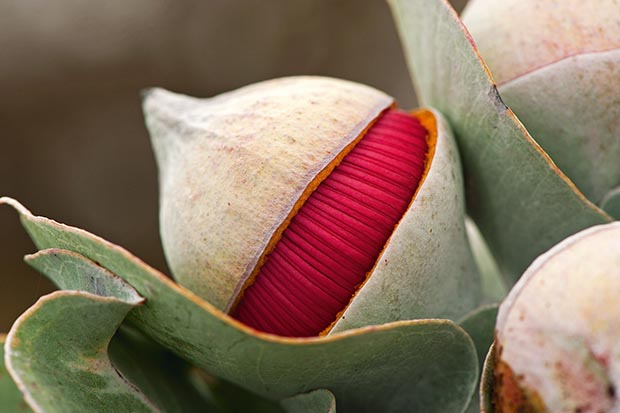 The interest in wild flowers, like the interest in birds, is very tribal. Every year during the season hard-core amateur botanists flock to Western Australia. They tour the countryside in coaches, caravans, 4WDs and campervans in search of rare and unusual wild flowers. At caravan parks, local information centres, pubs and cafés, locations of exciting plant sightings are exchanged, information on the stages of bloom are constantly updated, hot tips are whispered in conspiratorial tones to those who identify themselves as part of the tribe. Welcome to the world of the flower chasers 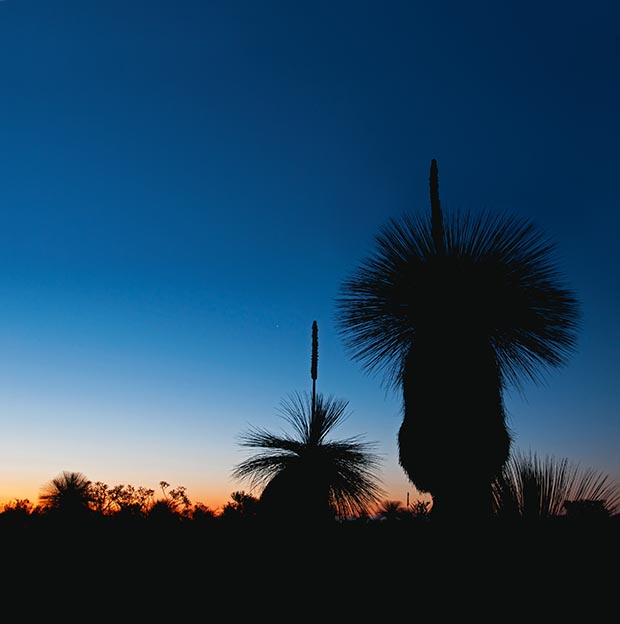 The magic word for the flower chasers is biodiversity and Western Australia has some of the world’s most amazing biodiversity hot spots. One of them is Lesueur National Park. I put myself in the hands of Mike Newton who promised me some real treats in this little-known national park north of Cervantes. Not that it seems likely we’ll ever arrive. The former national park ranger is someone who gets carried away and distracted easily by fragile floral temptations along the roadside. Spider orchids for example. Or masses of blue leschenaultia. Or orange-yellow cat’s paws that he insists on calling wallaby paws. 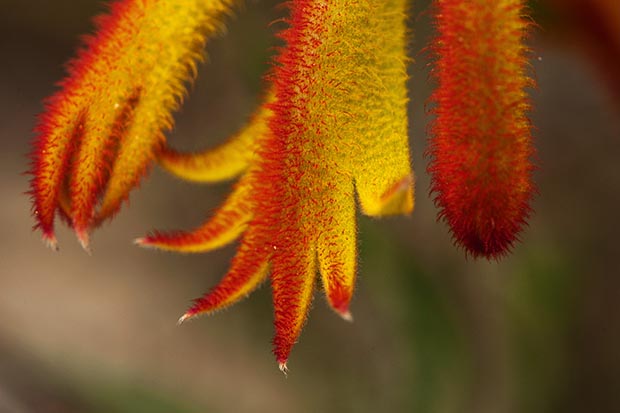 A common cat’s paw close up.

“Starting to go into macro mode now,” he announces, while speeding along the road towards the national park. While holding on with white knuckles, I wonder how he can multitask: driving and avoiding other cars while all the time searching for little and fragile plants hidden along the dense scrub bordering both sides of road. In the tourism business since 1999, he specializes in wild-flower tours in Lesueur National Park. Going on a wild-flower tour with Mike is an adventure into a botanical wonder world. Lesueur National Park consists of low hills and flat-topped mountains covered with uniform low scrub. There are no geographical highlights in the park as such. To see the real wonders one has to switch from wide angle to close up, stop the car and wander into the bush. A few metres will do. At one of the frequent stops Mike gets down low with a magnifying glass to get a good look at the intricate red flowers of a feather flower. “The scarlet feather flower is pretty much limited to this area,” he says. 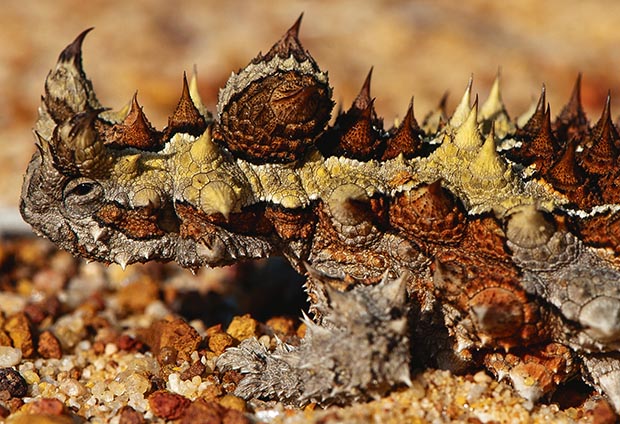 He points to the small red flowers among a head of yellow ones on the same stem. “The flower has changed colour, indicating to the insects that ‘I’ve been pollinated, so don’t bother me.’” It’s when he points out those clever adaptations that the true wonder of  Lesueur’s flora comes alive. What once was seen as worthless scrub and too poor for agricultural use is now considered a botanical Mecca. Some 932 named plant species have so far been found in the 26,987-hectare park – with no full botanical survey undertaken to date. As far as biodiversity is concerned, Lesueur National Park is the jewel in the crown. 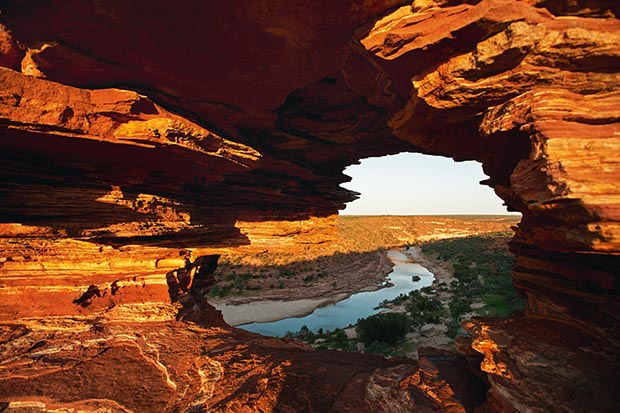 Further north, another Mike, this time with the last name Paxman, shows equal enthusiasm for all things botanical. He is the senior ranger in Kalbarri National Park, another biodiversity hotbed and a must-see for flower chasers. More than 800 species of wild flowers have been described within its borders, 21 of them grow nowhere else in the world.

It is a grey windy day with low clouds flying in from the south. The occasional shower drifts over a wide and undulating landscape. Mike P is on patrol along the Emu Track, a sandy management road through the central section of the large park. I’m allowed to join him. Along the track he shows me kangaroo paws, smoke bush, verticordia, coppercups, ribbon peas and many species that even Mike has difficulties identifying without consulting literature. And in a different part of the park, there is a totally different selection of flowering plants. 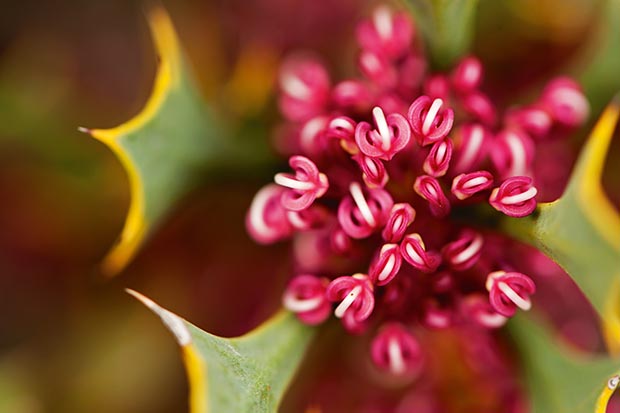 It is probably hard to imagine that wild-flower connoisseurs can top the experiences to be had in Lesueur and Kalbarri National Parks. But for those in search of something even more special, Hi Vallee Farm not far from the small wheat-belt region of Badgingarra, is the ultimate destination for flower chasers. There, farmer Don Williams takes me to a small grove of spindly eucalypts. It is one of only nine populations of Eucalyptus leptophylla in the world. “This is one of our star plants,” he enthuses. “There are 190 stems here. What’s interesting, being a lignotuber tree, is that every trunk is genetically identical. It’s really just one plant.”

Eucalyptus leptophylla, one of seven DRFs (declared rare flora) on his property, is just for starters and sets the scene for an extraordinary wild-flower tour with Don. It’s a journey into the weird and wonderful world of plants. Besides the seven DRFs, Hi Vallee Farm boasts a further 38 priority species. One of them is the very rare, grass-like Loxocarya gigas. One has to be a dedicated flower chaser to get excited by this particular plant. But for flower chasers, rarity trumps beauty any day. There is plenty of flowering beauty on his farm too: the pretty golden-red bells of Diplolaena mollis. Or various dryandras. Or the pink stars of Petrophile linearis. The list goes on. 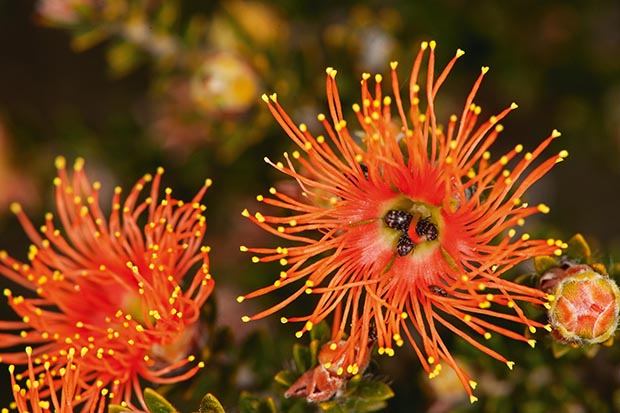 “This part of the world – the Lesueur Botanical Region – is accepted as the richest part of the world for species,” says Don. “That means more species per botanist quadrant of 10 x 10 metres than anywhere else in the world.”

Don is a flower chaser’s dream come true. His knowledge, his enthusiasm, his ability to express reasonably complex topics in plain English, his dry humour and his limitless energy when looking for rare and special plants on his private bush reserve are gifts that he dishes out generously. That Hi Vallee Farm today is a sanctuary for many rare, endemic and unusual plants can be credited to his foresight. After clearing 50 per cent of his bush block, he started to realize what a botanical treasure trove he owned. He left most of the remaining virgin bush land untouched and developed a keen interest in botany. Over the past 40 years or so he has rubbed shoulders with the most eminent botanists of the state, been involved in plant surveys, has been visited by a team from National Geographic, dealt with film crews and managed to preserve a vital piece of plant evolution for further generations. 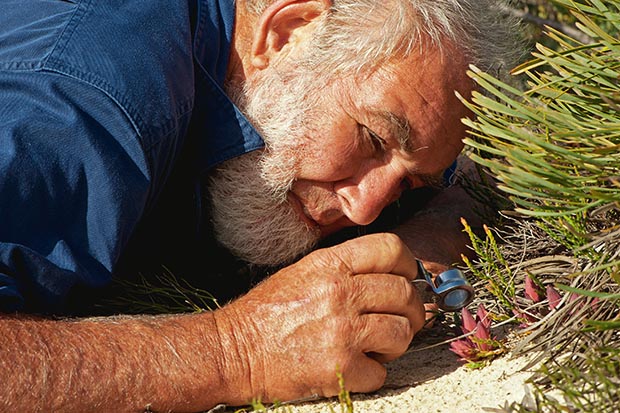 HI Vallee Farm’s Don Williams up close and personal with a Darwinia speciosa.

“This is the most valuable piece of untouched bush land in private hands in Western Australia,” he says proudly.

Preservation of virgin bush was never a priority around the town of Moora, northwest of Hi Vallee Farm. Flower chasers nevertheless have good reasons to flock there. Although most of the bush is almost completely cleared around the town, narrow strips of bush land have been left on both sides of roads, signposted as “flora roads”. It really doesn’t matter where you stop along these country roads; exciting discoveries can be made everywhere. And it was in Moora that I pick up rumours that lead to a new chase: near the Stockyard Gully Caves north of Lesueur National Park, the rare arrowsmith spider orchid is still in bloom. Getting there: Western Australia is serviced by Air New Zealand via Perth.

Getting around: A car is essential to join the flower chase, with a 4WD recommended because some of the roads are unsealed. All major car rental companies have a presence at Perth Airport.

Where to stay: There are many options in the area. Caravan parks  offer accommodation in cabins and are also a great source of information on where specific plants can be found during the season.

When to go: August and September.