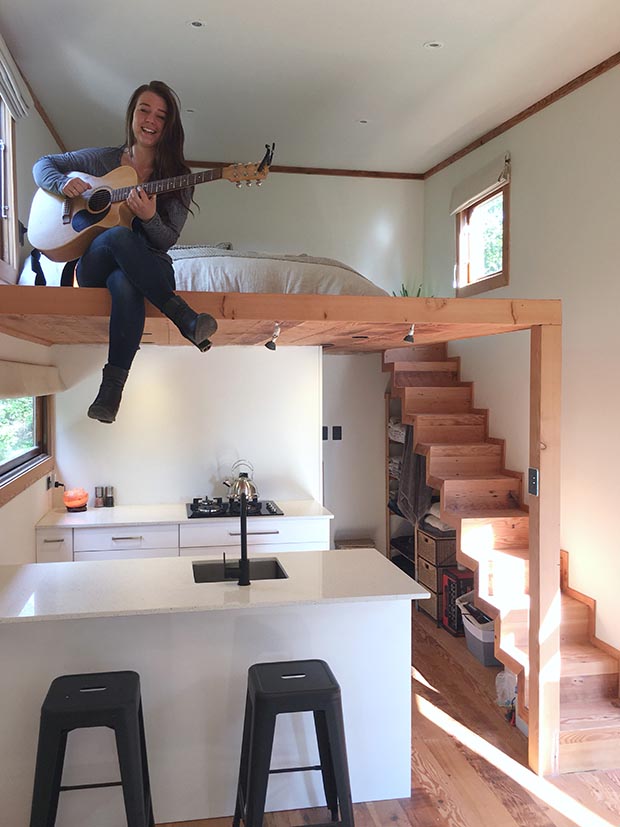 A young Wellingtonian is thinking big with a burgeoning tiny house business.

When Gabriella Grace chose her final year project at Steiner school, it was to build a tiny house – with her Dad. This drew father and daughter close and opened doors into a fast-growing industry that has captured her heart and filled her days with opportunities.

The 21-year-old Wellingtonian has just completed her second tiny house build. She recently cosied up under a thick duvet in her new loft for her first night in the space she’d built almost entirely herself “I had an incredible first night in my tiny house. It felt completely unreal to finally be in there – a moment that was long awaited.”

She sold tiny house number one to a friend of her Mum’s, and it now sits on her mother’s land as the owner spends half the year in England. 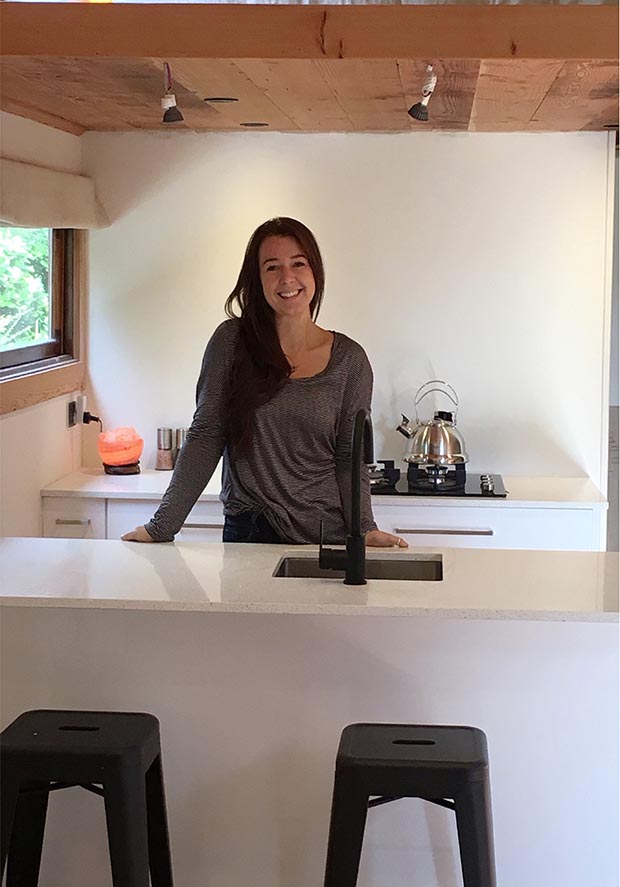 Back when she was 18, during her final year at the Steiner school Raphael House in Lower Hutt, she grasped the opportunity to pursue her passion for small spaces. This fascination stretches back all the way to the tree house her Dad built her as a little girl.

Next, there was the tiny loft she liked to retreat to during her teenage years. When the properties containing these precious small spaces were sold, she began to yearn for another small space to call her own. 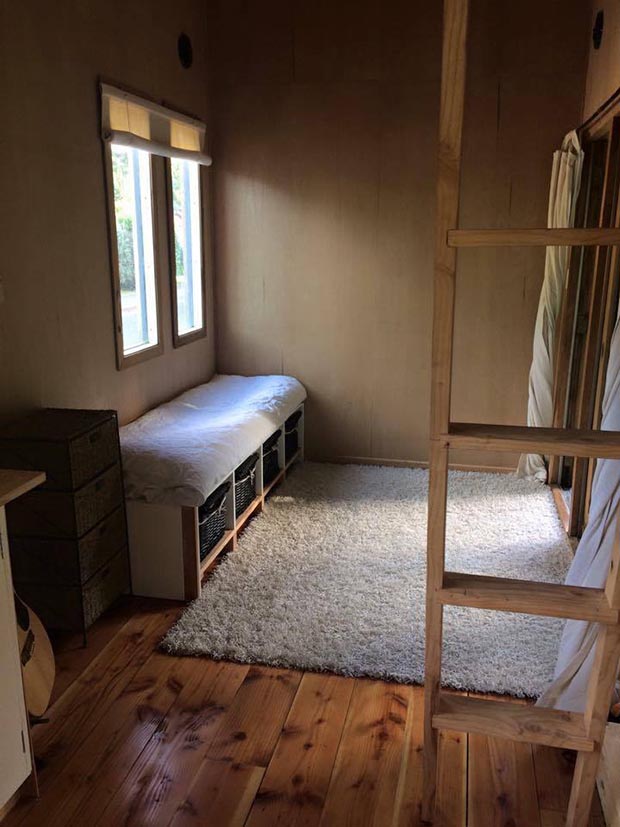 Following a quick sketch on a napkin in a restaurant, Gabriella and her Dad were devoting all their spare time to building their first tiny house – back when the concept was quite new for New Zealand. 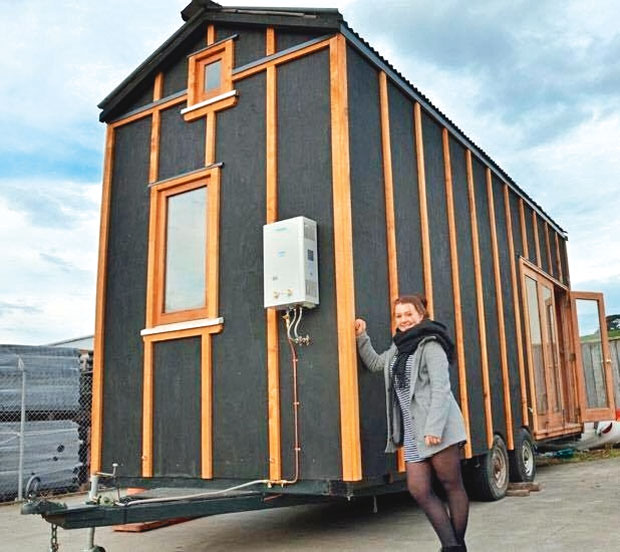 “It was an amazing experience for me. I recognised that doing something practical together was a platform to bring us closer after drifting away from him as a young teenager. My Dad’s a very practical person who has completed many projects over the years. This was enough for us to get stuck in, and the rest we learnt along the way.” 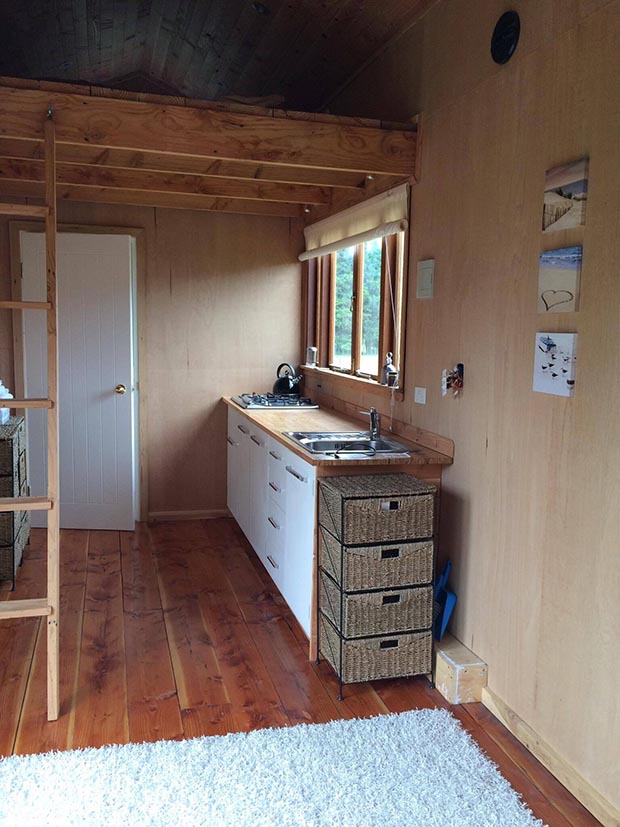 Building her second tiny house nearly entirely on her own was a completely different experience to that first one. She had a better idea of what she was doing, and so she felt more confident tackling the unknowns. Creative thinking became the norm.

“It was a completely different ball game, and I loved the challenge.”

She built her second house frame with steel, rather than wood. She said steel is a lot harder to work with as everything is screwed into the steel and often pre-drilled. She was so passionate about the frame-build that she headed down south to Arthur’s Pass to work on it alongside the engineer. That worked so well that the engineer invited her back again, and again, to work on other tiny house steel frames. 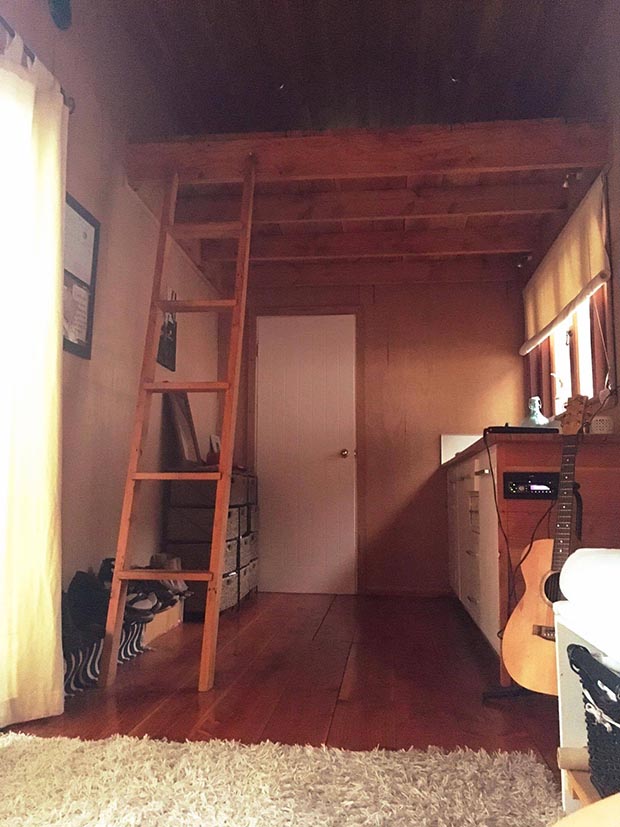 Other most-satisfying-moments of the second tiny house build include finishing the first wall of weatherboards (which her mother helped paint), and putting the floor down.

“I’ve had amazing help from my Mum with painting it, inside and out, putting insulation in, and recently making my curtains! My Dad built my beautiful back door with cedar offcuts! And I’ve had paid help from tradesmen to do plumbing and electrical work.” 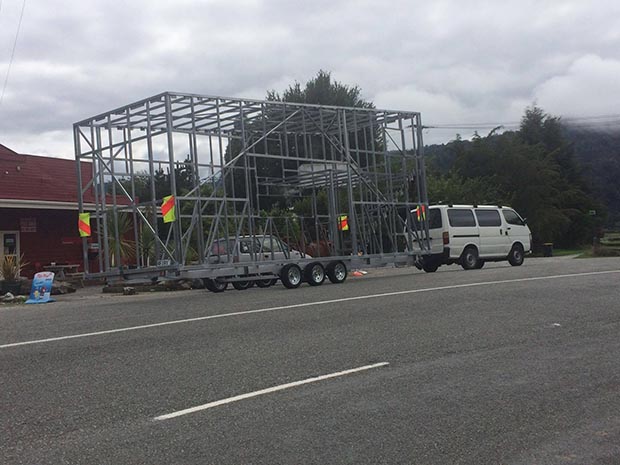 Being in charge of her build she has learned a lot about the legalities of tiny house building in New Zealand.

A tiny house is legally seen as a caravan by New Zealand Transport Agency. Most people know they can build their trailers to a maximum width of 2.5 metres.

However, Gabriella says there is also an “over sized load” option. She used this loophole to build an “overhanging load” into her tiny house, which has taken the width up to 3.1 metres.

More stories you might like:
Breathing life back into a 1936 Fiat Topolino 500cc — the gutsy little sports car that could 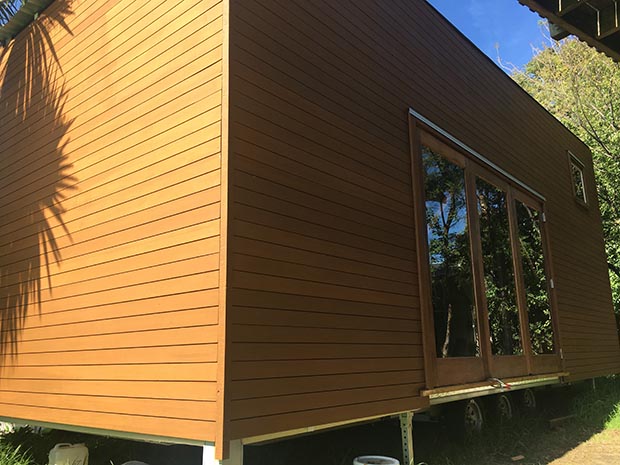 “There’s a constant debate about weight and size, but at the end of the day its first purpose, for me, is to be a home. So it’s got to work for you,” she says.

Her house reaches the maximum height of 4.25 metres and is eight metres long.

“Weigh up what is important to you. When building a tiny house, everything is a trade-off – weight, space, money and time. Weight is an ongoing consideration when building on wheels. Space you use in one area, takes away from space you have in another area.” 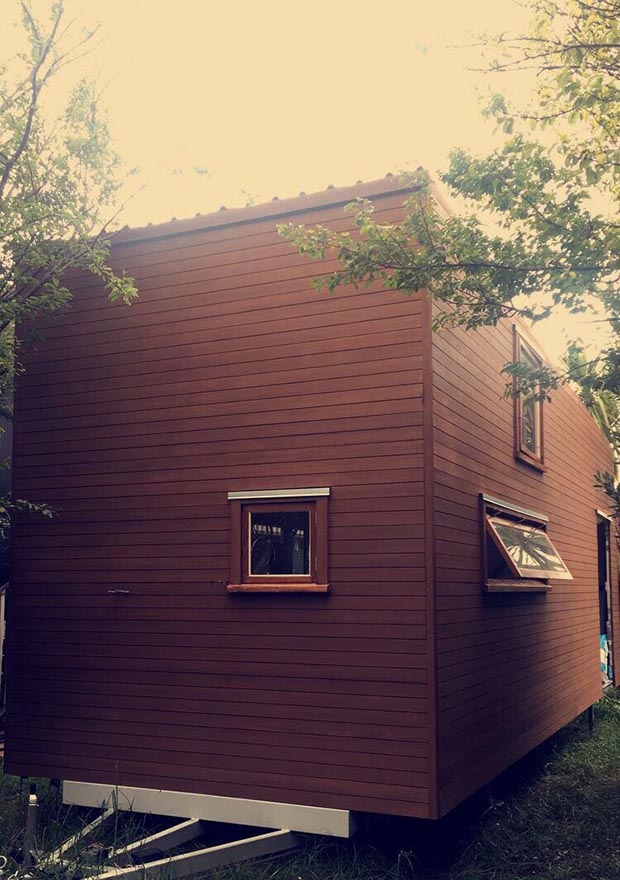 She says using recycled materials is an “undeniable money-saver as well as an environmental choice”, however, it takes time. “De-nailing timber or refurbishing a kitchen can be very rewarding and make for character, but it’s a huge effort and often tricky! I’ve used a combination of new and recycled materials. I love the rustic features of my recycled floor but also appreciate the tidy finish of my new weatherboards. I chose to spend more money on some things and more time on others.”

She recommends people turn tiny living into a simple lifestyle.

“Less is more. I lean toward simplicity in design and also in layout. I leave the space as open as I can and own only what I need or use frequently.” 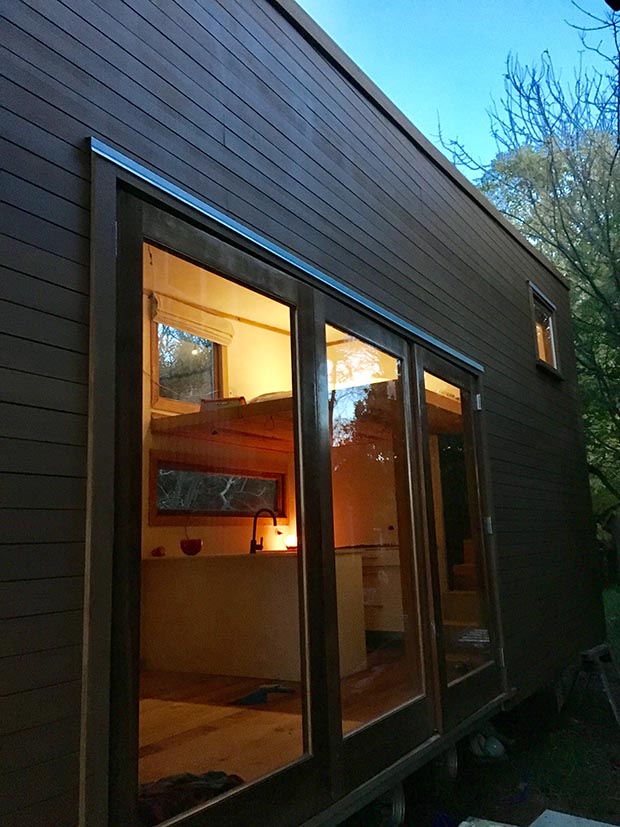 With growing interest and need for alternative living options world-wide, Gabriella sees tiny houses as being part of the solution. She has met many people intending to build their own tiny houses, and shares her story with them via her public Facebook group ‘Gabe’s Tiny House.’

She hopes to eventually start a tiny house community near a city centre where people can co-live, independently, yet stay very much engaged with society. Within this, she sees scope to facilitate tiny house building workshops, with technical and hands-on support. 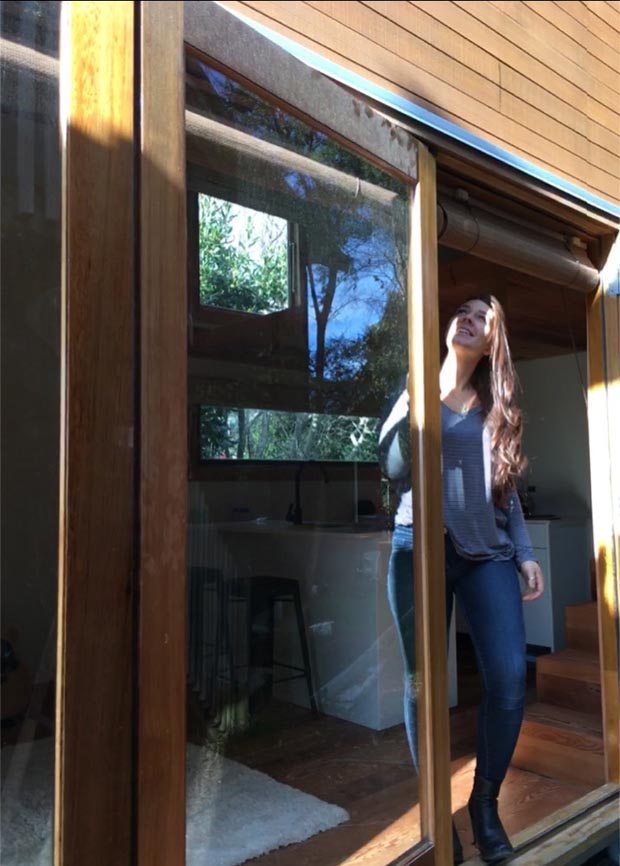 First, she’d work with local council to legalise multiple dwellings on one section. This project is at the ideas-stage right now, and for Gabriella it’s all about timing.

“I’ve got the energy and the resources for it. I’m just figuring out the best approach. I’m constantly thinking about it and will move it forward when it’s the right time.”

Tiny house building offers a skill set that she’s also putting to use professionally. She works part-time as a project manager for a real estate company, Tall Poppy. The tiny house cafe under construction

While she built tiny house number two, she set up the first ever Tall Poppy Tiny House café (Tall Poppy Central). Now that she has more time post-build, she’ll be running it, making coffees and serving raw, healthy treats. If the concept takes off in Wellington, Tall Poppy Central will be opening multiple tiny house cafes around New Zealand.

For now, Gabriella plans to take a break from building and get immersed in the operational side of their first Tiny House Cafe.

“Building this home has reinforced the reality that I can do anything, providing I want to do it! Serious dedication and determination got it here. I don’t underestimate the size of the project, nor talk it down.”

“There is something humbling about living in a small space, and one which you’ve built with your own hands. I’m grateful to have had the opportunities that have to lead me here and to have the supportive people around me that I do.”