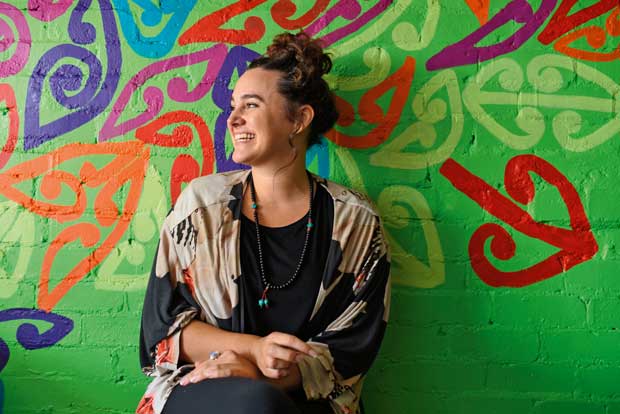 For Kristina Cavit – yoga teacher, mindfulness coach and youth leader – mindfulness means not only paying attention to and nourishing her present, but also that of others.

Despite being THE latest trend, practising mindfulness has origins in ancient Buddhist teachings, and the basics haven’t changed. It’s about drawing attention away from the pressures of life, buzzing and stinging like a swarm of frustrated bees, back to the present.

Kristina (30) is the founder of the Kindness Institute, a social enterprise that uses the tools of mindfulness and yoga to boost the self-esteem, mental health and leadership skills of marginalized youngsters. For the part-time actress and “fat-yoga” (yoga suitable for all bodies and fitness levels) enthusiast, it was a journey that started with a flyer pinned to the wall of a Bolivian hostel, calling for volunteers to help in a local slum.

In Bolivia as part of her OE, she volunteered for a day in the slum and met an 11-year-old girl forced into prostitution and young children with addictions to cocaine. “I woke up to what I was doing with my life. It opened my eyes to my extreme privilege.” She chose to stay in Latin America, moving on to the organization NPH (a charity for orphaned or abandoned children) to help in the aftermath of the Haiti earthquake.

Kristina then spent two years in the Dominican Republic for NPH. She realized that for children to thrive, they need to be able to manage emotions. Teaching kids how to handle stress isn’t high on the list of priorities in poverty-stricken or disaster-struck areas, so Kristina began to teach basic yoga and mindfulness.

More stories you might like:
The story of Beard Brothers: From a small Hastings butchery to a banger of an empire

“These kids often had no outlets for their stress and few people they could trust, so I tried to give them a little of both. The difference after a short period blew me away. But after two years there, I was exhausted.”

She returned to Auckland (after a brief stint in a yoga ashram) and launched the New Zealand branch of NPH in 2011. The Kindness Institute came in 2016.

“Yoga has an association with wealth, but it was originally a survival tool. Most of the kids we teach are completely weirded out at first, but once they step outside their comfort zones, let their guard down and are allowed to relax, they get it. Many live in environments where they need to be hyper-vigilant, always on and protecting themselves.”

Most of her students are between 14 and 18 years old, and are facing two paths in life – what they know, or stepping outside their norm. “There’s an idea that the family you are born into determines your future, but as I was adopted, the support and empowerment I was given shaped my life. I want to be a part of giving that same support to other young people.”

Kristina works with a team of volunteers who mentor and nurture youngsters through an in-school and out-of-school atawhai (kindness) programme.

“Our mentors are role models who speak up for these kids. They don’t hide their mistakes or who they are – rangatahi [young people] need to see realness and be treated with respect. We’ve had a 100 per cent reported reduction in stress and increase in focus and compassion and some of the rangatahi are attending school more.”

There’s another benefit to teaching kids, and that’s their desire to share. Many go home and teach their families yoga and mindfulness; many parents are also aspiring yogis, thanks to the kids’ enthusiasm.

Yoga, meditation, and mindfulness are perhaps not the classes that parents expect their children to be taking, but in the modern world where everything is all go and screen time overtakes putting bare feet in the grass, it’s proving to be a rare moment of peace.

Meditating is simple, says Kristina. Take a full, conscious breath, and feel it. Pause for 60 seconds, tune into the senses, and be in the present – after all, every stressful thought is from the past or future.

Her approach is working. Don’t dare interrupt one of the meditation classes – even a child with a “bad” reputation has been caught yelling, “Shut up, I’m meditating” across the room. Between stints in overseas orphanages and running the Kindness Institute, Kristina has plans to take her programme further. “The dream is to have this programme in all schools, so all children have the tools to manage stress and transform their lives.”

The Kindness Institute’s work is funded by Kristina’s private client business where she helps people deal with juggling family life and work, climbing the career ladder, or just dealing with modern life. “I can’t change busy, but I can help to find calm. We work on what is holding you back from the life you want, how to find a voice in the workplace or at home, and how to stop taking on the stress of others.” thekindnessinstitute.com
Kristina has also been nominated for New Zealander of the Year 2018 (winners are announced in February). “It was a complete surprise. My first reaction was ‘should I even be in this?’ It took me a while to track down who nominated me, but I am very grateful”. nzawards.org.nz