It was more bad luck than ominous foreshadowing that North Shore adventurer William Pike’s first hike didn’t quite go to plan. A tramp to the summit of Mount Tongariro turned into two blokes in a tiny tent in the worst storm he had ever seen. But it was going to take more than a night spent in close quarters to deter William from the trail less traveled. With one hike under his utility belt, he set about exploring New Zealand.

“I started with the Great Walks, but I enjoy the challenge of a trip that goes off track – there’s more adventure and effort, and some hardship. If I’m pushed, I thrive; otherwise, I tend to get bored.”

William was training as a teacher at Auckland’s College of Education (now Auckland University Faculty of Education) in 2007 when he befriended fellow “outdoorsy bloke” James Christie. 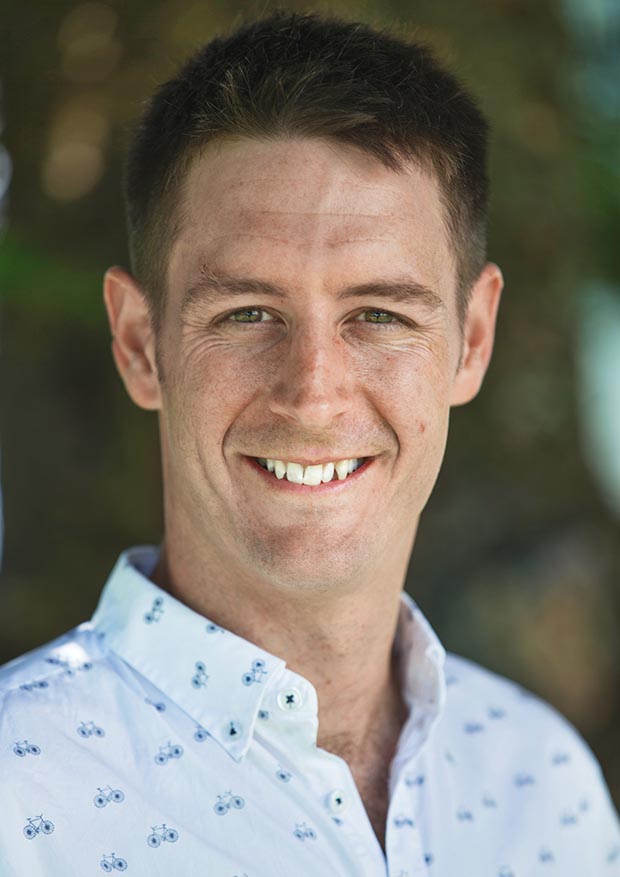 On 25 September, the pair handed in an assignment and decided the only thing to do when feeling on top of the world is to climb a mountain.

They neared the summit of Mount Ruapehu at 8pm and settled into Dome Shelter after dark, too knackered to pitch a tent or dig a snow cave.

8.20pm Mount Ruapehu erupted, spewing 1.5 million cubic metres of rocks, mud and water into the air. Boulders smashed through the roof of the hut pinning William to the floor. He was unable to move and at risk of drowning from the torrent of crater lake water that filled the hut. Cracks in the floorboards allowed enough water to drain away, saving him.

9pm James, who was miraculously unharmed, struggled to keep William conscious before realizing he must go for help. The friends said goodbye and James ran – an act that won him a medal of bravery.

Unsure if he was still alive, the rescue team carefully brought him down the mountain to a waiting helicopter, then Waikato Hospital. It was a slow and painstaking process; William was so cold that every bump threatened to stop his heart.

4.30am Emergency doctors struggled to bring William’s temperature back up with blood transfusions and blankets, unable to operate or access the injuries until he was stable. They amputated the lower half of his right leg later that morning. His father broke the news to him when he woke a day later. 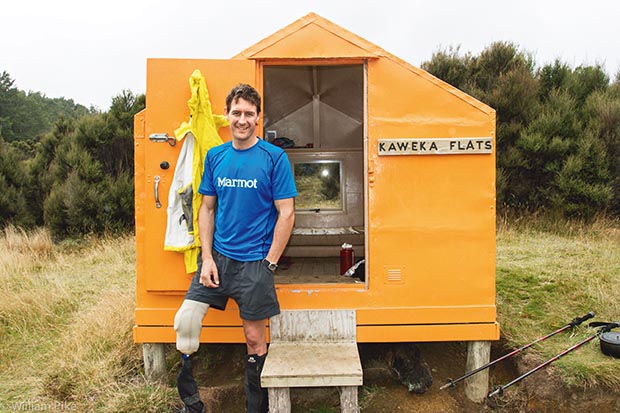 “Hearing that was horrific at first, but it soon became apparent that I was one lucky kid. I had no choice but to get over it and see it as another challenge, something to take in my stride. I first visited the leg shop [he had a prosthetic fitted] in February 2008 under strict instructions not to walk or run. But they didn’t say climb, so a friend and I went rock climbing at Mount Eden. I’m a little bloody-minded.”

William had a goal – he was determined to make it back to Dome Shelter – but first, he had other mountains to climb, like relearning to walk, hike and swim. He attempted the Ruapehu climb in 2011 but turned around knowing it wasn’t his time.

In 2012, with a school group and James by his side, he made it to the summit, closing a chapter of his life that had begun in the same place five years earlier.

William has been turning the pages of his story at a dizzying pace. In 2009, he was approached by a parent with an idea for a youth development programme. Now The William Pike Challenge Award is utilized by more than 60 schools nationwide.

“I was unsure when they first asked if they could name the programme after me, but it’s become something that creates connected, resilient, confident 11- to 13-year-olds engaged with their community. We partner with schools and organizations to offer support and resources to facilitate the programme, and to help record their journey.”

More stories you might like:
How New Zealander Hannah O'Neill became one of the Paris Opera Ballet's top dancers 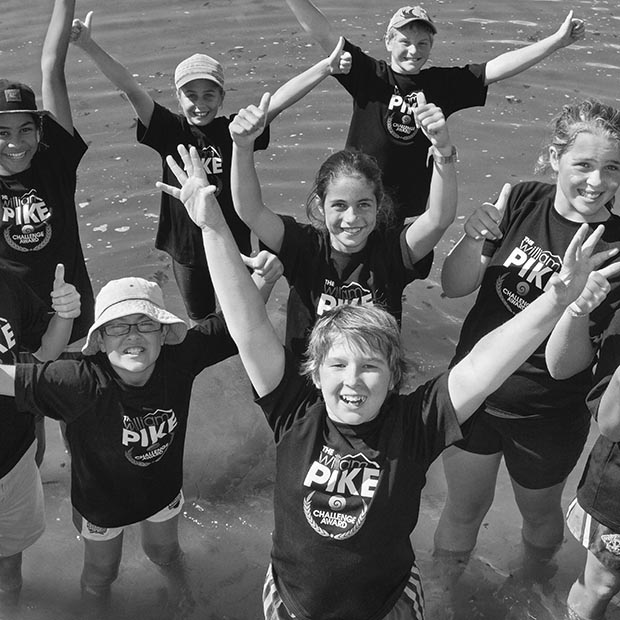 Participating children must take part in five outdoor activities, 20 hours of community service (such as helping the elderly, planting or conservation efforts) and complete a year-long passion project which builds skills and has them trying something new, whether it’s cross-stitch or rugby. The challenge is a way for William to connect with and inspire kids outside of his role as a teacher, something he put to the side as his career veered in a different direction.

Few people have survived a volcanic eruption, and fewer again have the skills and platform to turn it into fodder for a motivational talk. William speaks at school events, conferences and corporate gigs – his time and knowledge is in high demand. “At first, it was the volcanologists who got excited. I would start my story and they would interrupt and say ‘yes but what about the eruption? What was the actual eruption like?’

“Sure, when I’m gone some people might remember me for being that guy in the eruption but I hope I’m remembered for my impact on youth development, and for inspiring people to be explorers.”

To William, being an explorer isn’t about completing impossible death-defying missions or reckless tasks. An explorer pushes boundaries, tests limits, and sees everything as an adventure. There’s an element of obsession – an obsession with the outdoors, with going further, seeing more. Obsession isn’t always a bad thing, says William.

“Often an obsession becomes a passion, and passion fuels success.”

Explorers also take the time to absorb their surroundings – if there is one thing he learned from losing his leg, it’s that slowing down isn’t always a bad thing.

“When I climb I have to stop every 30 minutes or so, whip off my leg, dry the liner, whip it back on. At first, it drove me mad. I wanted to go faster, harder, be fitter, and I hate the thought of holding others up. But I realized it allowed me to take in my surroundings, to check in with the group, and myself. Instead of racing to the top, it’s just as important to stop and take in the journey.”

More stories you might like:
Craft project: Make this rockhopper penguin crochet hat (child-sized) for Bird of the Year

Fueled in part by obsession, curiosity and that bloody-mindedness, William applied to join the 2017 Antarctic Heritage Trust’s Inspiring Explorers Expedition.

In February, he joined filmmaker Simon Lucas, Newshub’s Isobel Ewing, and Sylvie Admore from the Royal New Zealand Air Force, on a two-week trip to Antarctica where they hoped to climb the 880 metres to the summit of Mount Scott. They reached the white continent after spending three days traveling by boat – “it was like being on a non-stop rollercoaster”.

“The day we landed was emotional. It was not at all what I expected; we were faced with a mountainous environment where people do not belong. Access was dicey, and we spent the first hours in a pea-soup fog putting our crevasse training to good use and drawing upon the fitness we’d been building over the previous five months.”

They reached the summit at 8.05pm, and met with clear skies and utter silence.

“One of our guides broke down in tears, and he’s climbed hundreds of mountains. At that moment, my dream had come true, and I was able to reflect on the past 10 years and feel grateful and proud.”

Back in New Zealand, life is about to take a detour for William and wife Rebecca. Awaiting the arrival of their first child, William is on the hunt for a kayak built for two and tiny little hiking boots. Climbing Mount Scott didn’t spark a plan for world domination – there’s no ticket booked for Everest. If anything, the Antarctic experience made him more aware of how incredible New Zealand is.

“Our backyard has everything we could ever want, and  it’s accessible.”