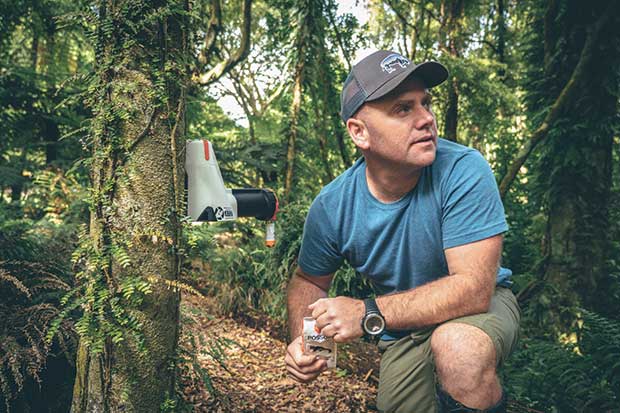 A Wellington company is delivering a lethal blow to the world’s pests.

The idea for Goodnature was born in 2004 somewhere on the West Coast of the South Island. Co-founder Robbie van Dam, an industrial design graduate, was working as a volunteer, placing and setting single-kill rat and stoat traps.

The job involved lugging steel traps and boxes uphill. It was back-breaking, calf-aching work. The return trips to reload and re-bait the same traps just weeks later were the clincher. Robbie had to hike all that way to kill one — single — rat per trap in a forest teeming with the buggers.

“It felt so futile it almost didn’t bear thinking about,” says Robbie. And that’s not mentioning the stoats. “Single-set traps are mostly about trying to control stoats, but rats end up being caught 98 per cent of the time because they are more prevalent,” he says.

“Stoats are bird-killing machines. They will kill an animal 10 times their weight. For example, one season in Fiordland just a couple of stoats halved the takahē population from 400 to 200, and takahē are big birds.”

Back in Wellington, Robbie and fellow industrial design graduate Craig Bond started sketching ideas for a self-resetting tap. In 2005, the duo presented some of their designs to DOC and received a $20,000 innovation grant to test them. The company, Goodnature, was formed.

“DOC had been trying to find a solution to the predator problem for 50 years. They wished us good luck, but I’m not sure they held their breath.” 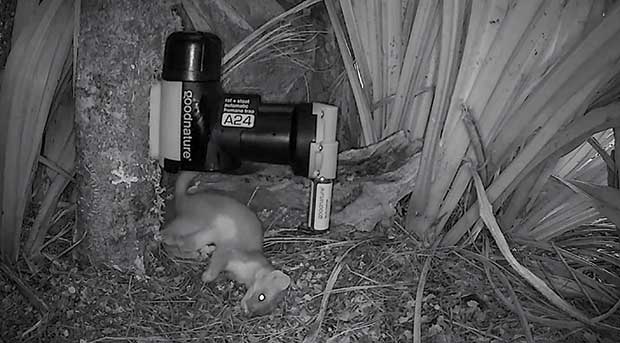 Robbie and Craig persevered. By 2009 they had a prototype ready, a self-resetting trap powered by a CO2 canister. Goodnature now has two traps on the market. The A24, which targets rats and stoats and is effective at controlling hedgehogs and mice, and the larger A12, which targets possums. The company is growing and increasing production. It manufactured 2000 rat traps in its first year and now produces more than 2000 per week. Overseas sales — Goodnature exports to 20 countries — account for 50 per cent of sales.

The A24 trap retails for $189 and is more expensive than traditional traps, but the savings on labour costs are enormous. A Goodnature CO2 canister can deliver up to 24 lethal shots, and the automatic lure pump needs changing only once every six months.

A traditional single-use trap would require resetting 34 times a year, according to DOC best-practice guidelines. DOC saves $98 per trap a year by using Goodnature products. That’s an enormous saving in regions such as Fiordland where there are 28,000 traps.

Elevator pitch: Goodnature’s New Zealand-designed and manufactured traps kill pests instantly. The steel-cored piston, which delivers the shot, is powered by a CO2 canister and can fire up to 24 times per setting. The trap is triggered when pests try to eat a non-toxic lure inside the trap cavity, after which it immediately reloads. The trap is mounted above the ground so that the dead vermin drop to
the forest floor, freeing up the trap cavity to catch more.

Headwinds: Goodnature’s R&D period was lengthy and “frustrating” for Robbie and Craig. For the trap to be considered humane, it needed to kill 10 out of 10 animals. “But the long trial period meant that when we did come to export five years ago, we had a product that was unquestionable. And we had many examples of how it had been
used in the field.”

Tailwinds: The government’s goal of being predator-free by 2050 has escalated conservation projects around the country. Backyard trapping is becoming increasingly popular as New Zealanders become more aware of the need to trap in residential properties as well as wildlife reserves.

Aotearoa is considered a world-leader for predator control and this has helped Goodnature land contracts overseas. The projects include killing the small indian mongoose in Hawaii, the american mink in Sweden and the grey squirrel in Britain. Exports are predicted to become 90 per cent of Goodnature’s business in the next five years.

What next?: Goodnature recently launched a Bluetooth-enabled device called Chirp, which attaches to the trap. The device sends data to a smartphone app so customers can see when their traps have been triggered. Goodnature reinvests more than 10 per
cent of its revenue into R&D and is currently exploring aerial biodegradable eradication technology.

“Customer feedback at the early stages of the business is gold. When developing your product, it’s critical to get it into the hands of consumers as quickly as possible.”