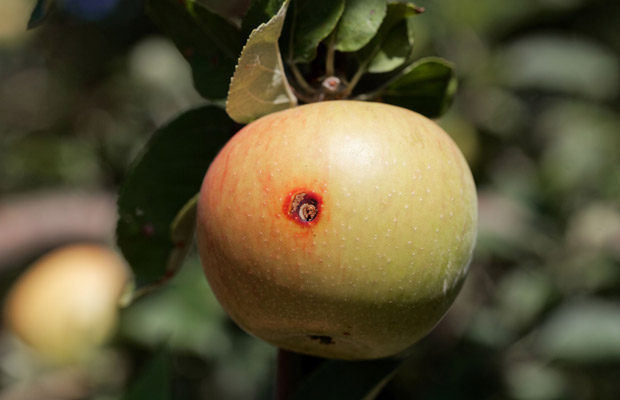 Bugs are a part of nature. I come in peace, but when they invade an entire apple crop, its time to declare war.

I run my orchard as closely aligned with nature as possible. That means I use very, very few sprays (even organic ones) as I believe in allowing the natural balance to assert itself. If my fruit aren’t all perfect, so be it, as long as there are enough.

This practice works well in theory. The problem is fruit trees aren’t in New Zealand’s natural balance. They are relative newcomers to our ecosystem and all their pests and diseases that have come in with them are relative newbies too. This means they may not have natural predators here. 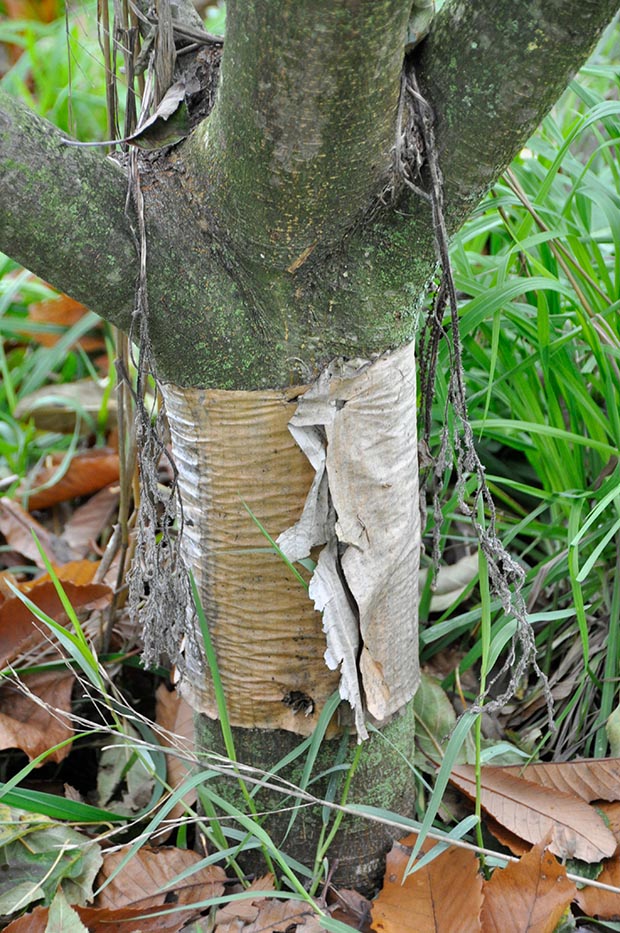 Cardboard wraps are limited in their effectiveness

Codling moth (Cydia pomonella) is one such pest. It infests all pipfruit (apples, pears, quince, crabapples, nashi) and walnuts. The caterpillar feeds for three weeks inside the fruit. Signs are an infected core and access hole ringed with brown frass (residue from chewing or excrement).

There are several organic methods to control codling numbers in your orchard. Unfortunately, some commonly-known ones are not particularly effective and all the methods target different stages of the life cycle so it is important to be doing the right one at the right time of year.

During winter the pupae spin a silken cocoon in a crevice or under bark and await temperatures of 15°C.

Clean up all fallen fruit and litter from under the trees. You don’t want any hidden habitats they can overwinter in.

Having chickens running under the trees may seem a solution, but carabid beetles and disease will kill any codling on the ground. Those who have trees both in and outside their chicken pen say there is no difference in the codling levels.

One remedy is to wrap the tree trunk in corrugated cardboard. The theory is that the caterpillar will find it an attractive hidey hole and spin their cocoon in there. You can then remove and burn it before they hatch in spring. The problem is there are lots of places further up the branches they can choose to hibernate and there can be several generations a year.

To be most effective, place the cardboard as high up the trunk as possible (but below any fruit), grease or make a sticky band below the cardboard to stop them passing on by, and remove and burn frequently from early summer to after harvest. Even then, you will only get a proportion of the codling cocoons.

This is the start of their active life cycle. Once the blossoms start showing a pink colour, the pupa develops the features of an adult moth and emerges late in spring (about petal fall). Adults will continue to emerge for several weeks and are most active on warm evenings.

They will mate and the female will singularly lay tiny eggs (about 1mm long) on or near developing fruit. These eggs take 8-14 days to hatch into tiny larvae which then crawl inside the fruit. This period is the most effective time to attack.

Pheromone traps are commonly available at garden centres or hardware stores. They have a lure, a sticky trap base and a triangular cover to hang in the tree. These use the female mating scent to attract males.

To use them as a form of control is like putting a pub on the corner and hoping it will stop teenage pregnancies. Males can mate many times and a mated female can lay as many as 200 eggs. You would have to trap every male as a virgin to be effective.

However the traps are a useful way to monitor when the moths are active (so you can spray). They are only effective if the sticky base is sticky and dust can quickly coat them. Fold them in half and then re-open to restore the sticky tendrils and extend their effectiveness.

Organic pheromone mating dispensers are a twist tie that you slip over a branch at the beginning of the season. When applied at 100 to the hectare, they release the female scent to such a degree it confuses the male and prevents mating. Moth numbers should fall in the sticky base trap if they are working effectively.

However, these are not easy to source, and although well regarded, I tried them for two years running with little noticeable effect. However, I had three closely-planted apple trees that are badly infected, and these are apparently more effective when used with low density of codling spread over a wide area/larger orchard.

Neem oil, conqueror oil or any oil spray will smother and kill the eggs. To be effective, this must be repeated at eight day intervals until your traps show the adults have stopped flying and laying, and full cover of the eggs must be achieved – spray under and over.

I presume the oils will also kill every other living being on your tree while you are at it so this is not a strategy I practice.

More stories you might like:
Sarah Hopkinson transforms the front lawn of her 800sqm section into a productive vegetable garden

STRATEGY 4: KILL THE EMERGING LARVAE BEFORE  IT ENTERS THE FRUIT

This needs to be done at approximately 80% petal fall, and needs to be repeated for success.

You can use any spray at this stage that is effective against caterpillars. Be aware that organic pyrethrum sprays and homemade garlic sprays will also affect beneficial insects, including your pollinating bees.

There are two organic sprays which are more specific, available at garden centres. You can get a sachet of Kiwicare’s organic caterpillar biocontrol. It does not list the codling as a target (it is aimed at white butterfly, leaf rollers, looper and other caterpillars) but the Bacillus thuringiensis (BT) it contains is also very effective against the codling caterpillar.

The other is available through horticultural supply stores and is branded as Madex-3. This contains the Cydia pomonella granulises virus which is specific to the codling moth. It comes in 100ml to mix in 2000 litres to do a hectare and costs around $125 so is only economical for those with larger orchards, or you could band together with friends to purchase a bottle.

Spray 10 days after the monitoring traps start trapping moths, and again every 10 days until 10 days after the traps are no longer catching anything. In my climate, this equals 2-3 times at 10-day intervals from approximately 80% petal fall.

Once the caterpillar is inside the fruit it is protected from sprays.

The caterpillar will spend about three weeks gorging itself on the flesh of your apple, before emerging to seek a hidey hole to make its cocoon (see Winter). North of Auckland, they commonly hatch a second generation about November and theoretically they can have more generations in one year depending on the temperatures. Further south, the records show it to be more a single long stretch of activity. 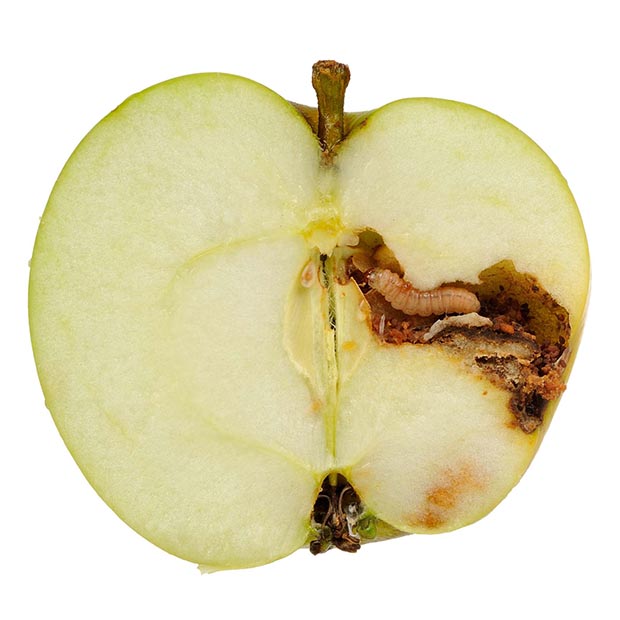 Once the caterpillar is inside the fruit, it is protected from any spray you use.

Use traps to monitor and spray larvae 10 days after peak periods, and/or to catch adult moths.

Moth traps can be used to significantly reduce numbers. While these have proven somewhat successful for me in the past, they were not effective enough in themselves for adequate control and there is no way to ensure you catch the female before she has laid her eggs.

However, gardeners I know have found them to be very effective, almost totally eradicating codling within three years, and they swear by them. I found all these options equally effective.

You need to put them out by mid-blossom and maintain them until after harvest in March to catch as many moths as possible. You can note the fluctuations in numbers and use these as indicator traps (spray for larvae 10 days after peak periods) as well. You will need to clean and replenish them frequently. 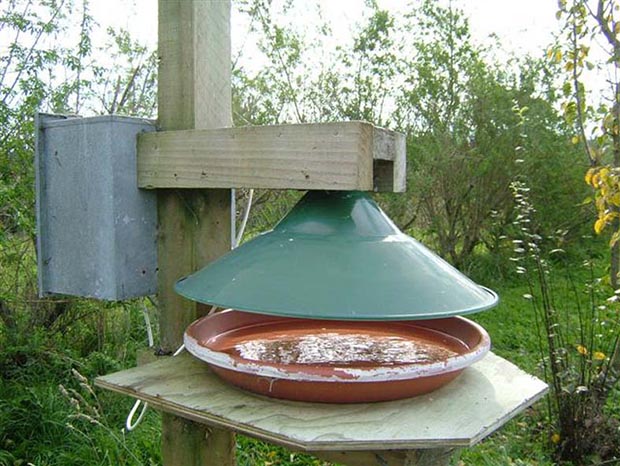 A sophisticated light trap using a light under a lamp shade, over a dish of water

Moths are attracted to light. Any light or solar light seems to work, although LED blue/white lights are said to be better than yellow-hued lights.

A container of water with a little cooking oil floating on top under the light will catch the moths. I have seen everything from corded lights under a Chinese-hat lampshade over a shallow dish, to cheap solar lights with their lens as the container. 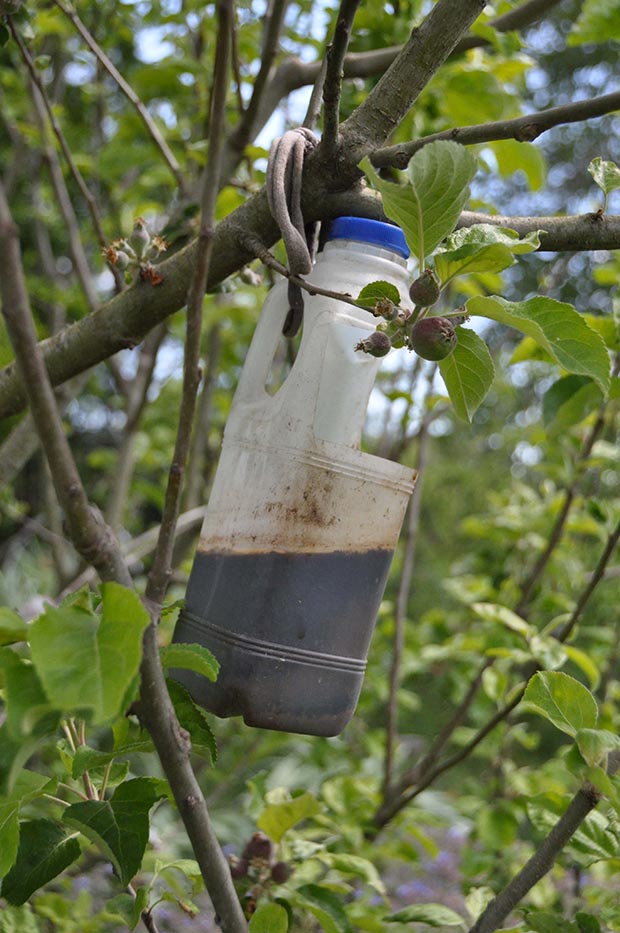 A sweet mix in an old milk bottle

HOW TO MAKE A MILK BOTTLE TRAP

Cut an opening in the side of the milk bottle and fill with either of the following recipes – both work. Check after rain and clean out and replace as needed.

Recipe 1:
Mix 1 litre of warm water with 100g sugar (white or brown), 1 tsp Marmite, ½ tbsp cloudy ammonia and ½ tbsp vanilla and place in milk bottles with
an opening cut in the side.

Recipe 2:
Put 1 tbsp of vinegar and 1 tbsp of treacle or molasses in a milk bottle with an opening cut in the side and half fill with warm water. 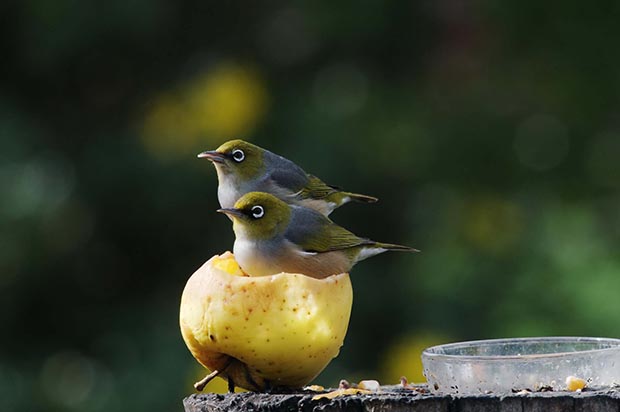 Little wax-eyes will dig out pupae

Natural controls have not proved effective in New Zealand. Yet. Little wax-eyes (Zosterops lateralis, also known as silver eye, white eye) will dig out over-wintering pupae, but it’s not usually enough to be an effective control.

A parasitic wasp specific to codling was released in New Zealand in 1906. It has survived (in unsprayed orchards), but it has not killed enough codling to reduce the population.

Since 2012, Plant and Food Research has been releasing Mastrus ridens, another wasp which will lay its parasitic eggs in the eggs of the codling moth. Over 60,000 have been bred and released in the commercial apple regions of Hawkes Bay, Nelson/Motueka and Central Otago. 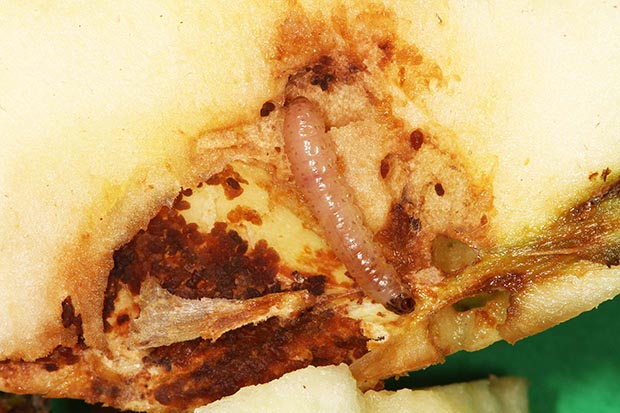 1. Hang moth traps in the tree as soon as blossoms start to appear.

2. Spray with a caterpillar biocontrol a week to 10 days after traps start catching adult moths or at 80% petal fall. Repeat in 10 days.

3. Refresh traps and leave out to monitor for another generation later on in summer.

4. Early season infection of the fruit is often by way of the calyx and can be hard to see. However, the caterpillar can be active inside the fruit as indicated by brown frass around the tell-tale hole. Removing and disposing of infected fruit can help control numbers.