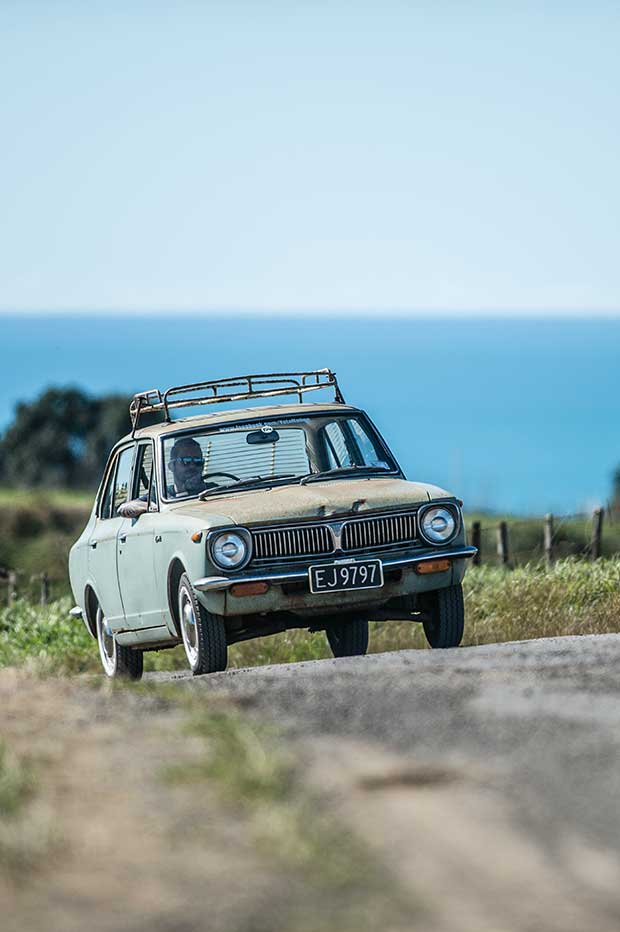 Possibly the most authentic Corolla in the country rocks the socks off its 28-year-old owner.

It could be said that Troy Jansen wears his heart on his sleeve… or that the tattoos on his right arm say it all.

Two Toyota emblems on his upper and forearm reveal his adulation for the prolific Japanese car manufacturer (he currently has 19 of its vehicles), while tattoos of pōhutukawa flowers and a famous figurine attest to how much he loves his hometown of Whakatāne. Recently, however, that celebrated bronze statue of the courageous wahine Wairaka, set atop a steep rock at the mouth of the Whakatāne River, caused him some angst. Parked on the seafront in his daily-drive Toyota Hilux with his partner Shannan, he saw a plastic orange traffic cone had been placed over Wairaka’s head.

“It was a rude gesture so I swam over and removed it. When I got back to shore a few people had gathered and they said, ‘tino pai tō mahi e hoa’ – very good work, my friend.”

It’s Saturday morning, and Troy is back on the seafront at Whakatāne, but he’s swapped his Hilux for the most significant find of his life – a rare first-generation 1966 Toyota KE10 Corolla – discovered in a farm shed near Pukehina. 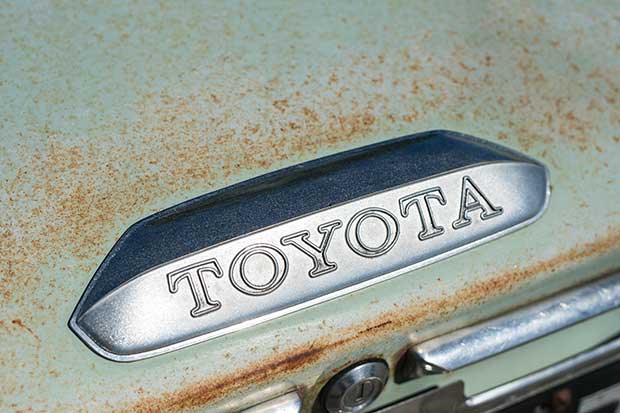 “Five years ago a sparky mate of mine was working on the property when he spied it under a tarpaulin covered in bird poo. I nearly had a hernia when he sent through some pix.”

Troy tracked down its owner, whose mother had purchased the car new. It had been in storage for 15 years but her crocheted rug remained on the back seat, her floral carpet floor mats were still in place, and her son was happy to meet Troy. 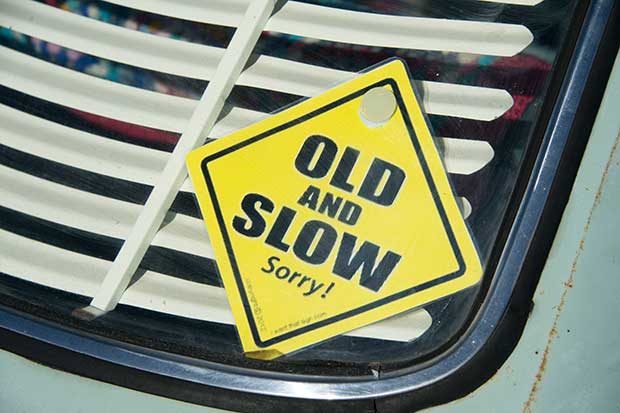 “I just hoped I didn’t look like a scruffy boy-racer who was going to ruin his mum’s car.” Troy had cash in his jeans pocket and a trailer on standby. “We pushed the Corolla out of the shed, popped the bonnet, pulled the fuel line off the carburettor, poked it in a jerry can of fresh gas, wire-brushed the spark plugs, added a fresh battery and in less than half an hour it was going.” The pair struck a deal and Troy’s never looked back. “It’s an absolute pearler. I haven’t seen or heard of anything similar.” 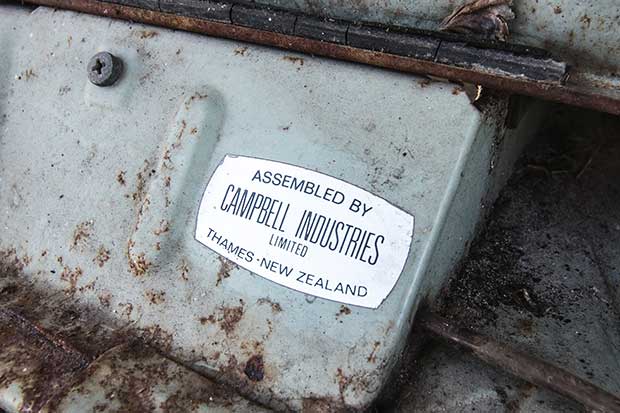 Assembled in Thames, the car hadn’t had a strenuous life – church on Sundays, groceries on a Wednesday – and only 86,000 miles, or about 140,000 kilometres, on the clock. “It hasn’t had a lick of paint since coming off the factory floor. There are two schools of thought – 50 per cent of people say ‘what a rust bomb’ while the others love its original patina.”

“I’ve done a bit of mahi [work] on the car – overhauled the brakes, renewed the water pump coolant lines and replaced the clutch, which is not the easiest task on a 50-year-old Toyota. When it got its first warrant, it was my mate who did the service and we had a wee ceremony – a special bloke moment.” Troy stores nine of his cars in a leased shed in Edgecumbe, seven at his dad’s, and the remainder between a mate and Troy’s granny. The rare KE10 was discovered hidden under a cover on a nearby farm.

Bloke moments and mechanics have primarily determined Troy’s pathway. “My old man is a petrolhead and a former jet-boater and he always had Japanese motors in his boats. He and my brother are ridiculously creative with all things mechanical. We didn’t have television growing up – instead, we mucked about outside building anything that rolled down a hill.”

The family car was always a Toyota, and Troy’s first set of wheels at 15 was a deregistered 1985 Toyota Hilux pulled off a farm. With his father alongside he fixed it up, learned to drive it and Toyota has been his trademark since. “I’m called Troy-ota by my mates.” 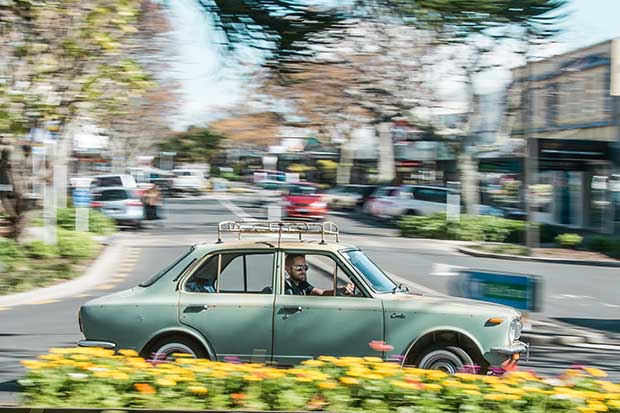 His collection includes a pristine 1974 Toyota Crown, a 1986 Toyota Century – formerly owned by the Japanese Embassy – and a 1982 Toyota Corolla Wagon he’s converting into a race car. Then there’s a cluster of pre-1985 Toyotas not currently on the road. “The 1970s and early 1980s were the golden years. I love the cool factor of these cars and hate the thought of those beautiful chrome bumpers in a scrap yard. I’m always looking out to save the next classic Toyota.”

The old-school Toyoda tattoo on his arm – written in the traditional Japanese script of katakana – embodies the marque’s beginning. Japanese industrialist Sakichi Toyoda was a well-known manufacturer of textile machinery before turning his mind to car-making in the 1930s. 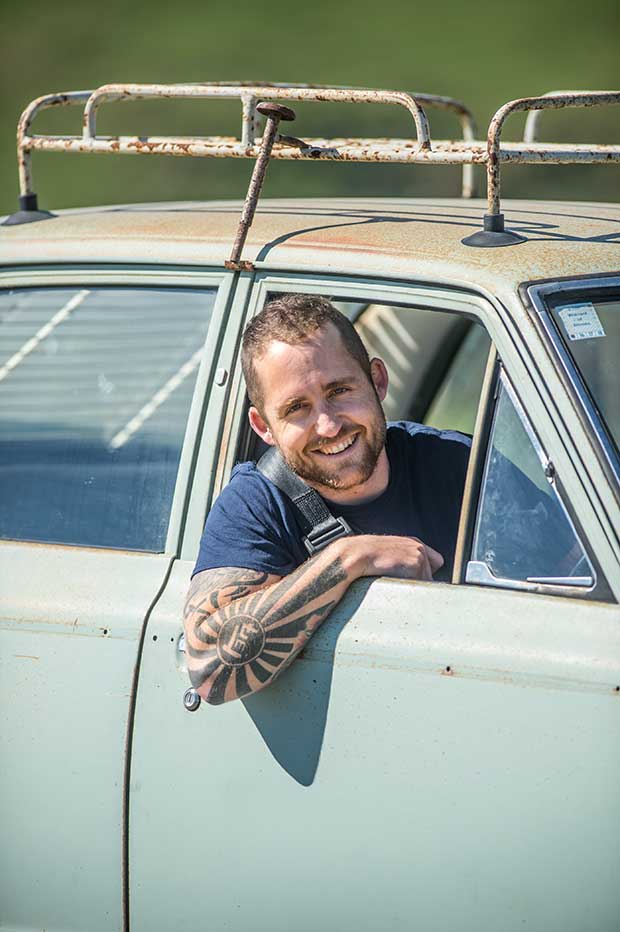 Toyota initially sold vehicles under the name Toyoda, but a design competition in 1936 delivered a new-look Toyota logo which was easier to say and see. While the company chalked up diffident results in its first three decades, in the 1960s it got smart. With highways, roads and the Japanese economy expanding, it designed a car to match the mood and Troy’s little superstar – launched in 1966 – propelled it onto the global game board.

Heading along Muriwai Drive, Troy says owning a first-generation model of the best-selling car in the world is a buzz. Forty million Corollas to date and still going strong. Equipped with a 1077cc engine, a four-speed manual gearbox and ground-breaking, mass-production MacPherson strut suspension, he says it’s a testament to how cars used to be built. “It might take a wee bit of beating to get up to 100 kilometres an hour, but when you nurse her along she sits so happily at 80kph.” 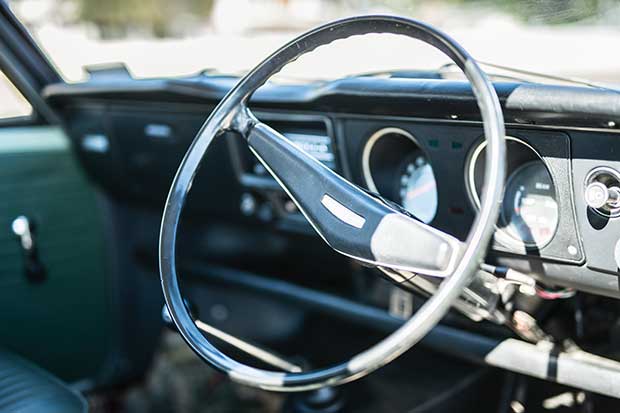 Troy handles all under-the-bonnet business on the Corolla and his Toyota fleet, fueled by his expertise as an electrician specializing in industrial instrumentation. His job has taken him to all corners of Aotearoa and Western Australia for three years. But he’s thrilled to be back.“In Aussie, I was based on an LNG (liquefied natural gas) offshore-production platform on 40-day on/off rosters and I thought, ‘this isn’t for me’. Some poor buggers weren’t even home when their children were born.” 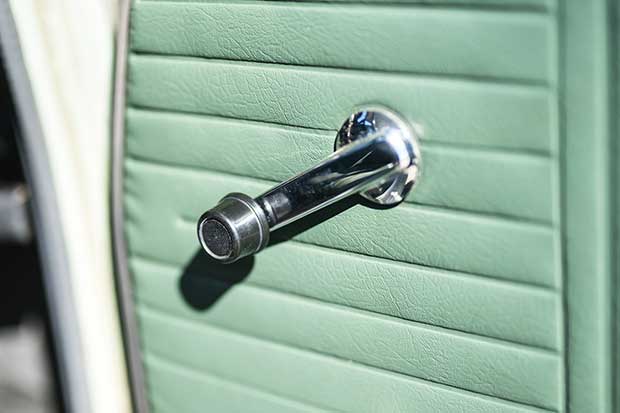 He says his travels cemented in his mind the uniqueness of his home country. “I have no Māori heritage myself but traveling has made me crave more awareness of our indigenous culture. I have wanted to learn.” While Troy’s life is foot to the boards, chilled-out Corolla moments are never too far away. Favourite times are fishing and camping – the barbecue has been known to travel on the roof rack – and ice cream runs to Ōhope with his mum and granny on board.

In the next few months, Troy will be installing the latest car-seat technology in his 52-year-old sedan. Early next year, he and Shannan and their baby will be out and about in the Corolla.