Meet the ‘Makaracarpas’: The Mākara locals who braved the winter months to clean up their waterways An environmental society establishes roots — and a community spirit — along a windswept Wellington estuary.

It’s no surprise that vegetation stands little chance in a place where gale-force winds are prevalent. Trees, even fences, have a hard time staying put in Mākara, a popular coastal suburb of Wellington.

But vegetation has had a better chance of survival since 2008, which is when a group of eco-conscious locals, calling themselves the Makaracarpas, got to work.

Initially, they cleared rubbish from the beach and Mākara Stream estuary. But by the time landscape architect Rebecca Wilson joined up, they had already moved on to riparian planting along the stream.

“The estuary was a grim, overgrazed, weed-infested expanse,” says Rebecca, who served as the Makaracarpas’ president until 2019. “We transformed the character of the waterway.” 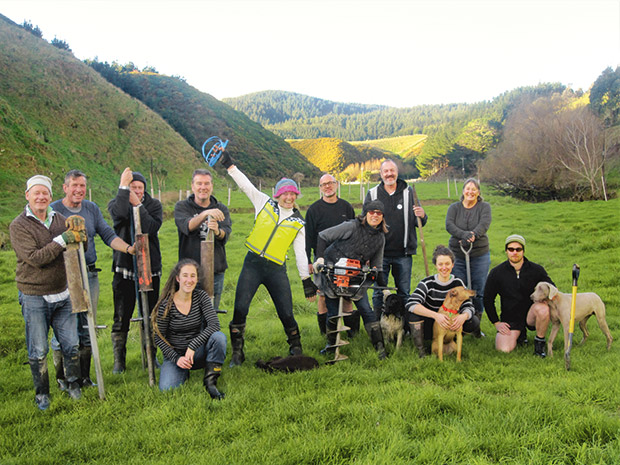 That’s not to say they didn’t get knocked down first – often literally. “We lost about half the plants one year from floods,” says Rebecca.

The group eventually moved upstream in hopes of improving the water quality. Wind and floods made fencing along the estuary virtually impossible, so livestock freely roamed the stream and banksides continued to erode. The Makaracarpas had a simple plan: convince farmers to allow them to plant riparian strips on their property. It was hopeful thinking.

“We didn’t have many takers at first,” says Rebecca. “Farmers just didn’t think it would work, which was quite disappointing.”

But it’s hard to ignore grit and determination, especially when the Makaracarpas planted in the windiest, coldest months of the year. They began planting on lifestyle blocks along the Mākara and Ōhāriu Streams, and soon enough, other locals began to notice.

“Farmers could look over the fence and see that the riparian planting was working,” says Rebecca. “It’s outstanding how healthy the estuary looks now.”

Now, with more than 30 active members, the Makaracarpas have sown the seeds of their own success. Twenty landowners have joined their scheme since 2016, a commitment that requires removing livestock to allow the trees to grow. In 2019, the group planted more than 5000 plants and donated another 2000 to landowners in the region. Rebecca credits their success to frequent, two-hour community work parties, often rewarded with nibbles and mulled wine. “It’s a great excuse to get together because we’re all fairly scattered around the valley. These gatherings have become almost as important as the planting – they’ve strengthened the community spirit,” says Rebecca.

When Mākara and Ōhāriu locals joined forces last November, it was to bid Rebecca farewell after she stepped down as president. She has since moved to Ōtaki but continues to consult for the Makaracarpas from afar.

“I’m positive they are on the right track because their work appeals to the whole community. I’m proud that I’ve left Mākara in better shape than when
I arrived.”

The Makaracarpas’ name is a fusion of “Mākara” and “macrocarpa”. “The macrocarpas that cling to an island in the Mākara Stream estuary are massive, gnarly and have coped with the extreme environment,” says Rebecca. “They’ve become iconic for Mākara.”

1. Speak with people one on one. “Talk to locals to understand their priorities. If only one person wants something, it’s a waste of time.”

2. Start small. “Don’t be too lofty because it can get overwhelming. Start with a small project and do it well. Once it’s looking good, people will be inspired to help you do the next bit.”

3. Recruit volunteers with different skills. “Having different skills in the group, like accounting and landscape design, is helpful. Approach people in the community who have those skills.”