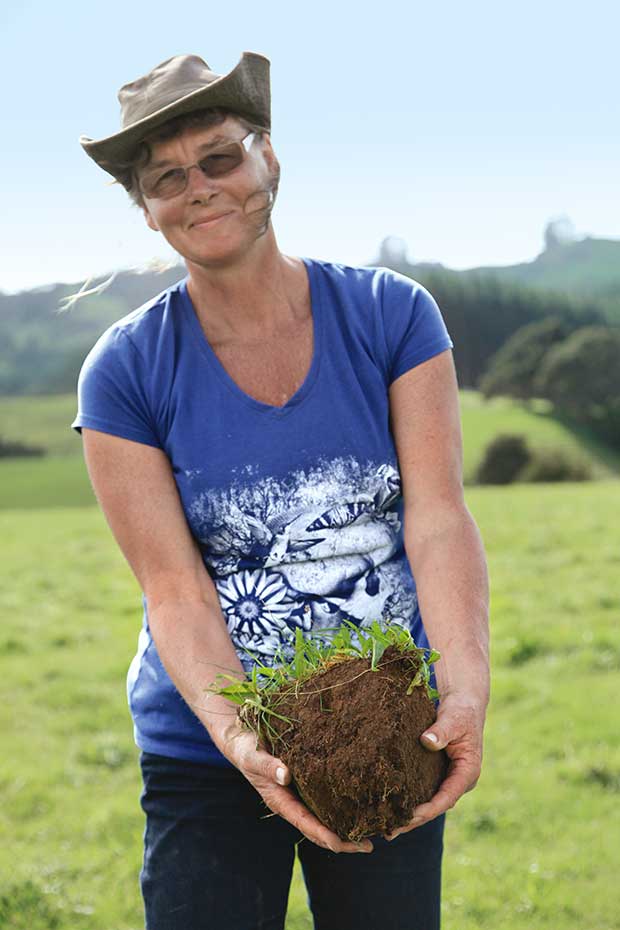 This award-winning organic farmer may have hundreds of sheep and cattle, but what she’s really farming is millions and millions of invisible helpers.

Bev Trowbridge knows exactly how many sheep and cattle she has at any given moment, but it’s the unknown quantities of livestock she farms underground that often preoccupy her thoughts.

“They’re the ones we need to nurture,” she says. “If they’re well looked after, everything else will thrive, too.”

Bev is originally from Devon in the UK. She and her husband, surgeon Dave Crabb, farm at Ahuroa. It’s near the Kaipara Coast, an hour’s drive north of Auckland and they’ve been there since 2004.

But for seven years prior to that they were out at Muriwai on the west coast. When Bev outgrew that farm, she took the name with her to the new one. 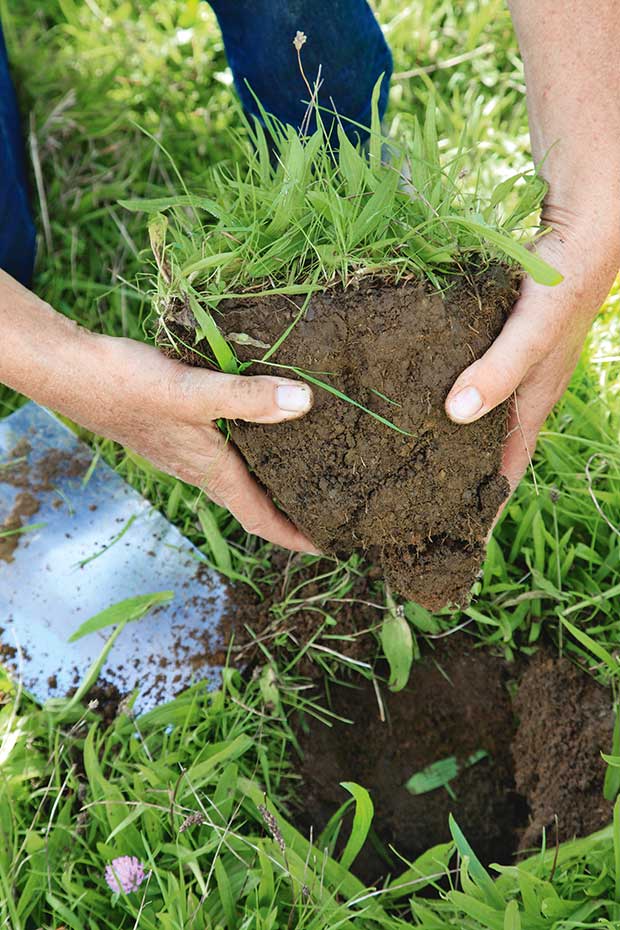 The underground livestock Bev is talking about is the microbial life in her soil, and one type of micro-organism in particular – mycorrhizal fungi – the extraordinary life force which is the key to healthy, living soil. In the 13 years that she has applied biological, regenerative farming principles to Muriwai Valley Farm, the topsoil has increased in depth by around 10-20cm. It has been a deeply satisfying and inspiring experience, and one she attributes largely to this amazing fungus.

It’s in stark contrast to most farms in NZ where topsoil is often badly damaged or disappearing. So how do other farmers with such diminished soil grow such lush-looking grass?

“Well, think of a ‘grow bag’,” says Bev. “There’s this thin layer of sterile growing medium, liberally bolstered by a handful of chemicals, which enables the plants to grow fast and tall, but they are nutritionally deficient and have shallow root depth. 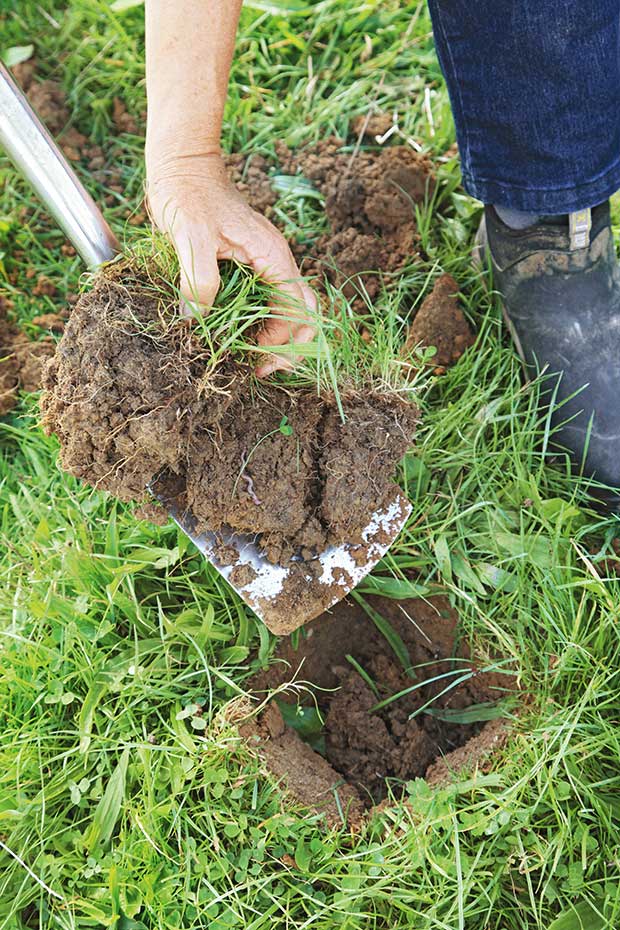 “Pastures may indeed look good, but will have poor root penetration in our compacted soils, the soils will be biologically compromised, and the nutrient content of the feed will not contain the full complement of elements needed for animal – and human – health.

“Trace elements in particular will be low or absent. Of the 118 elements that we know of, modern farming practices use only a very small handful to replenish the soils, which is why our foods are now highly depleted in life-essential minerals.” How does one start to build living topsoil?

“First, do no harm,” Bev says with a smile. “Stop the sprays and start thinking of ways you can avoid compacting the soil. Then make sure your infrastructure is good – you’ll need good fencing to rotate your stock properly, and decent yards to look after them well.” 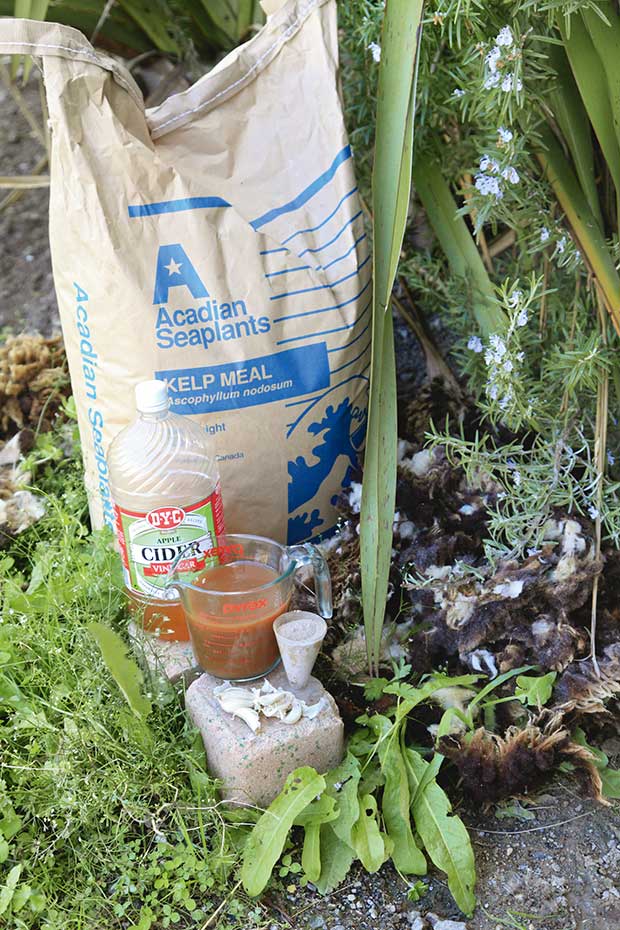 Bev gets her animals in to the yards as little as possible to avoid stress, and doesn’t use dogs for the same reason. But whenever she does get them in, she drenches them with a tonic she makes that includes a seaweed powder, cider vinegar, garlic and a probiotic element for gut health – no chemical drenches.

“Next, have a good look at your pasture management. This means moving stock every few days – never graze right down to the ground. Ten centimetres of grass left in the paddock is a good rule of thumb. And follow one species of animal with another so parasites won’t build up. Monoculture of anything generally causes long-term problems.” 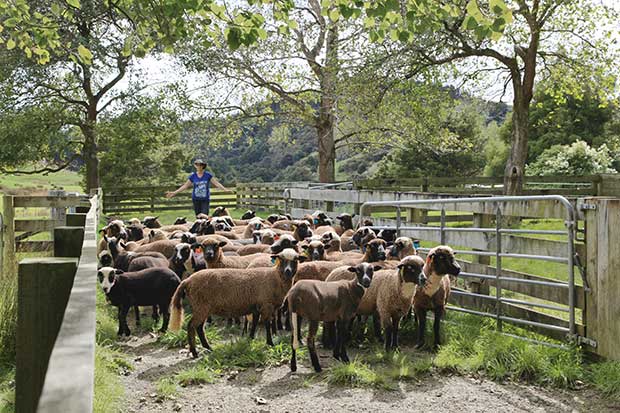 Bev’s multi-colour-coded whiteboard records her pasture use and is updated daily.

After years of experimenting with all sorts of animals, Bev settled on two heritage breeds of sheep, Wiltshire Horned and Arapawa – she has over 1000 – and cattle which Bev has bred especially for the land.

“The genetics of heritage breeds of sheep are naturally better equipped to deal with pests and diseases, not having been bred to depend on pharmaceutical support. And they’re smarter, which definitely makes them more fun to work with!

They’re the result of thousands of years of knowledge around land and animal husbandry, knowledge which has largely become lost in the current industrial model of ‘bigger, better, faster, more.’” 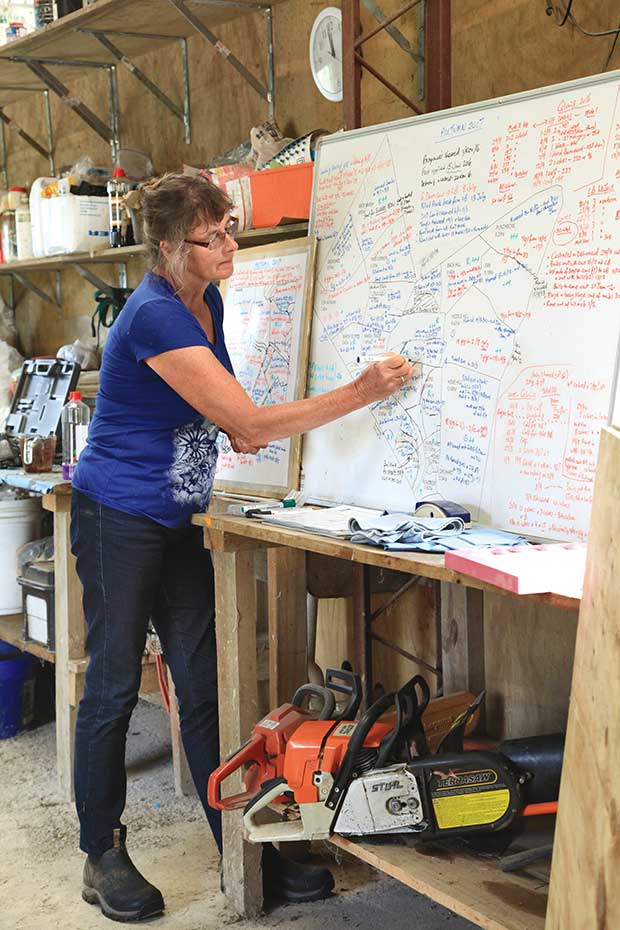 The cattle Bev has bred are Red Dexters crossed with Devons. She already knew Devons well from England (they’re famous for producing Devon clotted cream), but they have NZ heritage too, having been used extensively in oxen teams for logging and ploughing in pioneer days.

But they’re often too heavy for our soils in winter. However, cross them with smaller Dexters which have bigger hooves and you give them them a lower weight ratio per hoof. Voila – less pugging.

This cross has given Bev compact, attractive cattle that are easy on the land, and they have other positives too. “Docile, hardy, good foragers, good mothers and good beef producers.” The magnificent Wiltshire Horn sheep, named after the obvious.

There’s little or no information on where meat in NZ comes from and how it is reared. Bev is vehement: this degree of environmental untraceability is unacceptable and New Zealanders deserve to know how the meat they’re eating is fed and raised. In traditional agricultural models, for example, lambs are drenched monthly with multiple chemicals up to 6-12 months of age. Not a lot of your average Kiwis know this.

Some who take the trouble to find out often reel back in horror and become vegetarian or vegan.

“I think this is a bit of a cop-out,” says Bev. “What we should instead be doing as a nation is demanding organic meat, demanding that animals be treated with respect and that farming methods become less dependent on chemistry.”

A few years ago, Bev started the Northland Biological Farming Group and is also involved in a number of other groups with interests in sustainable farming and food. The IKHMG (Integrated Kaipara Harbour Management Group) is one of them. 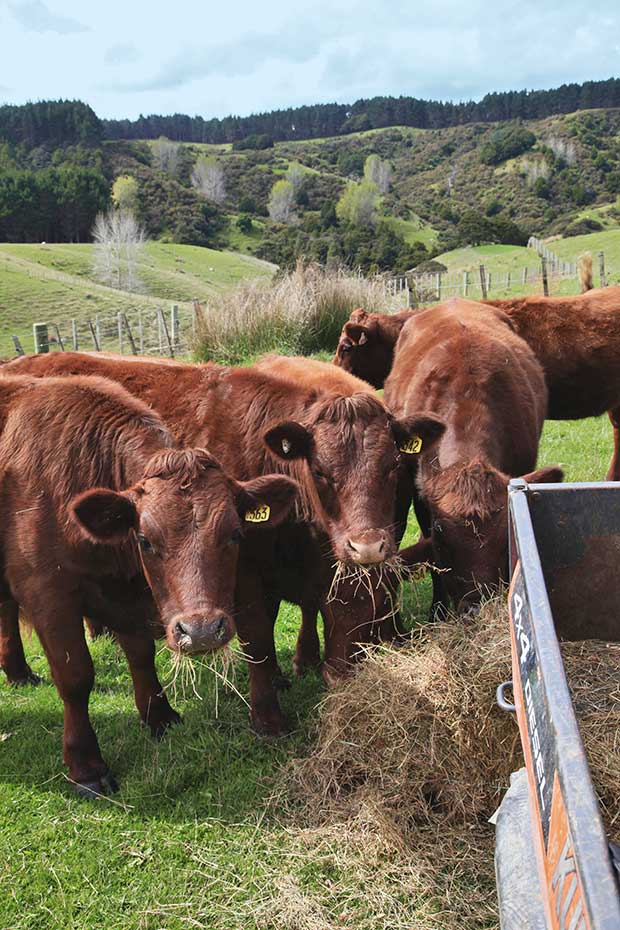 Muriwai Valley Farm is one of their flagship sites which helps to demonstrate sustainable best-practice that mitigates contaminants entering the Kaipara Harbour.

She works with Local Food Northland too, which runs the excellent farmers’ markets in Whangarei, and a local food co-op that has been going for a couple of years. She’s also involved in the mobile abattoir initiative. Until this is up and running, she’s decided to put more of her efforts into getting the message out there through farm consultancy.

Bev is going back to her roots with consulting. Her UK background is in ecology, in particular, combining it with biological farming methods. After 20 years in New Zealand, she’s well versed in native flora and fauna, so can help people get the best from their farm through land, livestock and soil management, and help to provide a haven for wildlife. 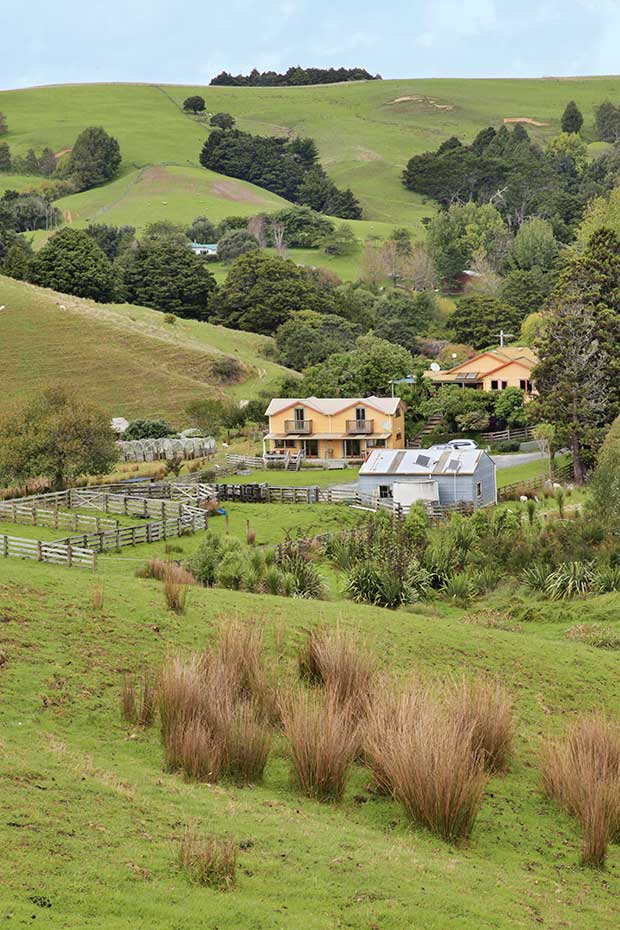 Muriwai Valley Farm is one of the flagship sites, demonstrating best-practice.

Bev and Dave walk the talk in many other ways at Muriwai Valley Farm. They both drive electric cars, and solar power is widely used on the farm. They have charming accommodation for WWOOFers, or those wanting to be educated in the ways of biological farming. They’ve planted many thousands of native trees and fenced off bush and wetlands.

Exciting – and imminent – plans include subdividing an area of the farm into six freehold lots of 1-2ha (2.5-5 acres) and selling to like-minded people.
“We’re thinking that whoever buys the blocks of land would have the option to be involved to whatever level works for them, hopefully with a shared vision of sustainable country living,” says Bev. 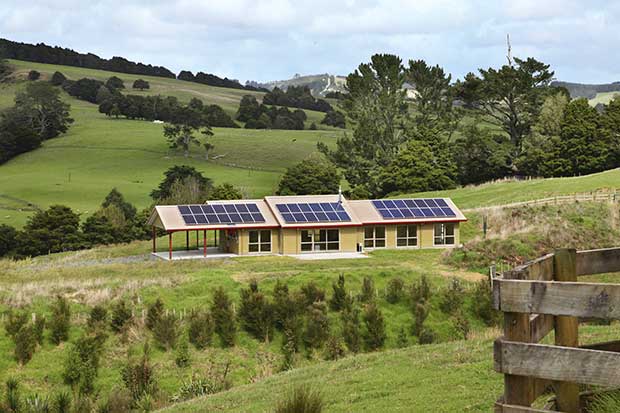 Bev and Dave have built an off-grid ‘show home’ as part of their future plans to subdivide part of the farm for like-minded people.

Bev and Dave have built a kind of ‘show home’ which is fully off-grid, as all the houses would have to be as part of the council consent. They’ll eventually have an electric charging station for cars too. Buyers will build their own homes on ecological principles in this beautiful environment and will hopefully bring some type of add-on enterprise too, like a market garden or orchard (to augment the existing food forest), or perhaps free-range table ducks, or hens for eggs.

More stories you might like:
How riparian design can protect New Zealand waterways and improve property value

Bev has just planted 4ha (10 acres) of high-UMF manuka, so bees will definitely be part of the community’s future too. 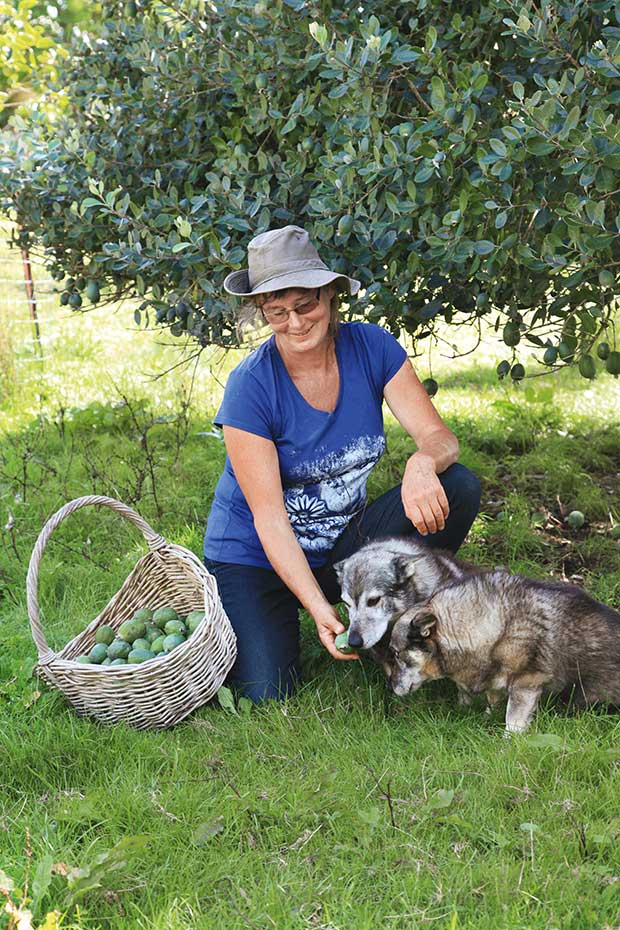 “There’s potentially so much to gain in a good synergistic group,” says Bev. “You don’t need to be an experienced farmer, just be keen! And there may be other roles – marketing perhaps – which could work.”

“No cats!” stipulates Bev. Native fauna will be fiercely protected.

Bev’s work is impressive, and that hasn’t gone unnoticed. At the Ballance Farm Environment Awards in March, she won three out of nine awards: the Beef & Lamb NZ Livestock award, the Auckland Council Water Quality Enhancement Award, and the Massey University Innovation Award. It’s a hugely rewarding result for an exceptional farmer with an inspiring vision.

HOW TO SUPER SIZE YOUR SOIL

Who wouldn’t want to be popping a steak from one of these beauties on the barbie? Sadly, unless the current situation changes, the exceptional meat from all those happy, organically-raised sheep and cattle won’t be arriving in a shop near you any time soon. Bev and David were certified organic for years when they owned a butchery in Warkworth, just north of Auckland, but let the certification lapse once they sold the shop and stopped selling meat.

They didn’t intend to stop, but they, along with a number of other small-to-medium-sized farms, now don’t have access to an abattoir that will kill and process their stock as small operators are going out of business.

“It’s incredibly frustrating,” says Bev. “You sometimes wonder why you do all of this when you can’t actually get your product to market. The big businesses own everything and are really not interested in allowing smaller operations to get established.”

It’s a problem that’s well-known by other local operators too, who are all in the same boat since the sale of Oxville Farm’s private abattoir at Hikurangi in Northland.

Phil and Annie Armstrong of Whangaripo Buffalos have decided to have a go at setting up a mobile abattoir. They have buffalo sitting in their paddocks that should have been in a freezer by now, or feeding the happy buffalo-burger fans at Matakana Farmers’ Markets.

“It’s pretty heart-breaking when you’ve got all this beautiful beef and no way of getting it on to people’s plates,” says Phil.

Bev has reluctantly (but hopefully temporarily) put a hold on her dream of selling Muriwai Valley Farm organic meat to the general public.

“It’s not possible just now, and farming is hard enough as it is,” she acknowledges with a wry grin.

“You have to decide where you’re going to put your energy, and mine’s currently gone back into breeding and selling the best stock I can.”