A diverse lifestyle block: This Rotorua couple’s property is home to horses, alpacas and mountain-bike trails Jeff Carter and his wife Sarah Carter Hall go in different directions most days. Jeff may be anywhere in the world with his mountain-biking ventures. Sarah, meanwhile, is more likely to be at home, looking after her menagerie,

He’s into his bikes; she’s into her horses. This Rotorua couple makes a living out of their hobbies.

Huge hollows and hillock, as if giant rabbits have dug enormous burrows into the land, run alongside a steep drive above Lake Rotorua. At the drive’s end is Southstar, the family home of Jeff Carter and Sarah Carter Hall and the headquarters of their separate businesses. 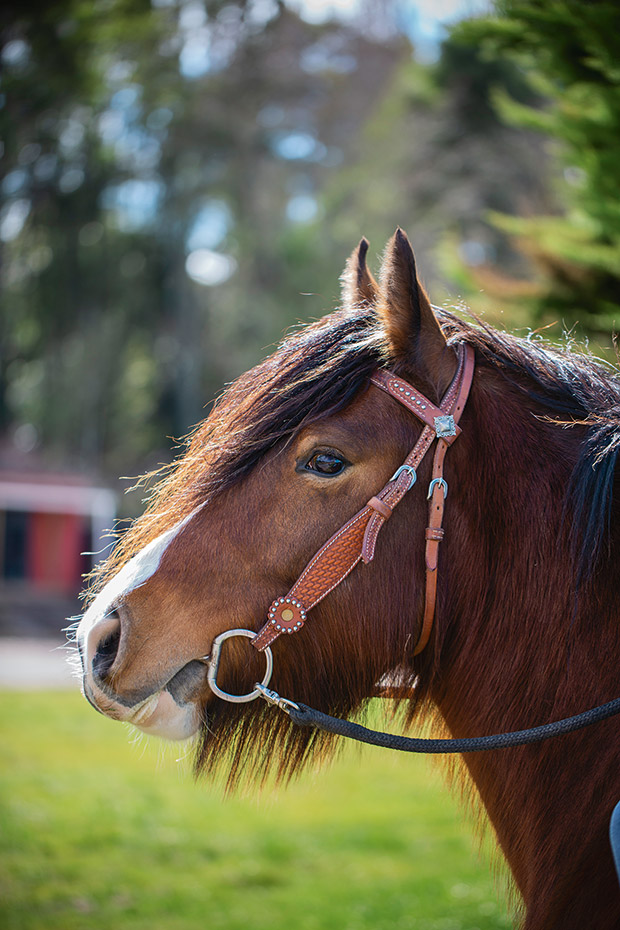 Jeff, says Sarah, is constantly on the go, whereas she is more sedate, “like the beautiful gypsy horse I ride”. Jeff uses any excuse to go mountain-biking, snowboarding, skateboarding or surfing. He calls it research in pursuit of the “ultimate flow”. In mountain-biking, this state comes when the challenge of the track is perfectly matched with a rider’s skills. And Jeff knows he has achieved it if a customer finishes a trail with a huge smile.

“It is an experience of total immersion where time stands still, like the feeling, in surfing, of a top turn on a wave. That’s pretty similar to riding a bike around a berm [a banked corner that can be ridden faster than a flat corner]. 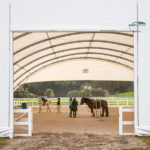 Having an arena has meant Sarah can run regular workshops. 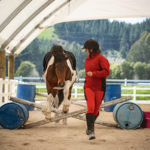 Sarah credits her neighbour Fiona Marrett with teaching her a great deal about horses. Here, Fiona is starting to work her horse, Izzy, without a bridle.

“While I’m designing trails, I’m thinking of snowboarding and surfing and trying to create the opportunity for riders to achieve those same experiences.”

Jeff’s work (and play) has taken him throughout New Zealand, Chile, Jamaica, México, Canada, Portugal and Australia, where he has already designed and built thousands of kilometres of bike runs. He currently has four trail builders in Austria, working on different projects. 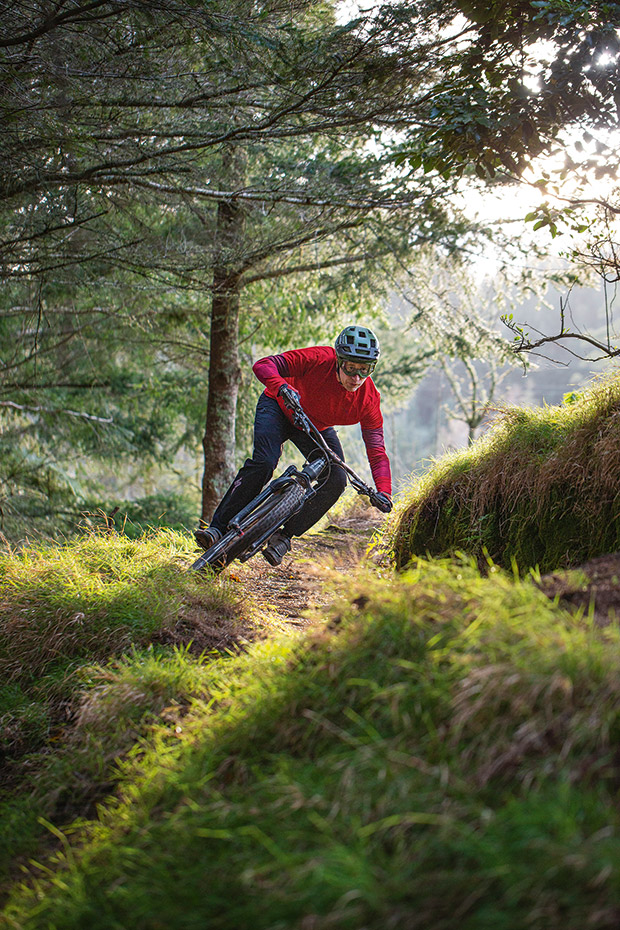 A mountain-bike ride should be a rollercoaster of fun, says Jeff. “I just love swooping through the trees.”

Sarah, a midwife who works two or three days a week at Rotorua Hospital as well as running her accommodation and horse business, is the fitting complement. “He’s a wanderer, and I’m a homebody.” She says she is happy to stay home and mind her adopted animal waifs and strays, including a rehomed kaimanawa horse, many fostered SPCA cats and hand-raised lambs and calves.

More stories you might like:
What to consider when creating a rainwater collection system for your garden

The pair met at 20 and are now in their mid-40s and, as a couple, balance each other almost as opposites, binding over the shared priority of their three children — Ruby, 18, Samantha, 16 and Joseph, 11 — and 20-year-old niece, Erika. 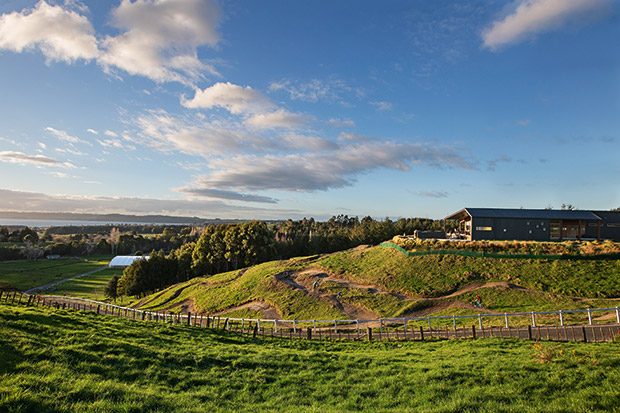 Jeff’s ventures have been successful from the outset, but Sarah’s equine business had a bumpier start. Until she was 35, she was terrified of horses.

She had learned to ride as an eight-year-old, but within a week of that first experience, her horse bolted and Sarah fell, breaking her arm. When Samantha wanted to learn, Sarah had to confront that fear. Discovering natural horsemanship changed everything. “It was like a little spark ignited, then boom. I found the psychology as fascinating as the riding.” 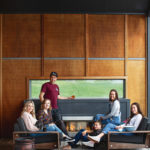 The Carter family’s five-bedroom, 350-square-metre house overlooking Lake Rotorua is barely visible from the main road because of its neutral colours. Designed by architect Kris Wilson at Rotorua’s Design House Architecture, the home follows a long ridge. Niece Erika McColl-Blair (below left) is very much part of the Carter clan, here with (from left) Ruby, Jeff, Joseph, Sarah and Samantha. 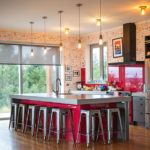 The living/kitchen area is orientated for the view across the lake at sunset. 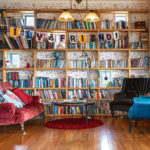 Getting ready for Christmas. Ruby made the “family and friends” bunting hanging in the “library” when she was 12. Jeff dreamed of a “big open space” for the home after seeing photos of New York lofts. Pendants are hung at varying heights to differentiate different areas within the open-plan room. 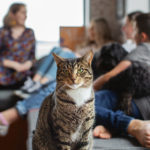 When the couple bought a 12-hectare property on the northwest of Lake Rotorua seven years ago, Sarah recognized she had an opportunity to build her own horse-based business. She already owned horses and grazed them at various locations. But on her own land, Sarah realized she could do everything.

She had space for grazing, a dressage arena, a show-jumping ring, even a cross-country course plus room for accommodation – not only for people but for horses. Jeff also saw potential in the land; he could create mountain-bike trails around the house. He now has 11 to enjoy with friends across the full six grades of national mountain-bike standards.

“Mountain-biking requires total concentration downhill, but on the up-hills, you’re flush with adrenaline and all the good hormones that come from the downhill-dopamine. It’s during that recovery period when all the good ideas come, or you get a chance to chat socially with friends. Then there’s the exercise component of it and its health benefits.” Six years ago, Jeff, a mechanical engineer consulting in Rotorua, was transporting mountain-bikers around the 5600-hectare Whakarewarewa Forest park. Soon, he realized there weren’t enough bike trails in the forest, so he began his own trail-construction company. This expanded throughout New Zealand, with public trails as well as commissions to design trails on private land. Then opportunities arose overseas.

He describes designing trails as a combination of engineering and artwork. The construction crew adds flavour to the design by taking Jeff’s alignment and making it fun to ride on. But trail-cutting seldom runs smooth. Jeff and Sarah bring different finishing touches to the home. Jeff favours chunky industrial design, whereas Sarah adds softness with her vintage treasures. The window seat and cushions made from upcycled woollen blankets, for example.

The trail through Nelson’s Wairau Gorge, recently gifted to DOC, was particularly challenging and Jeff had 50 staff working on it for four years. “It’s steep terrain so there were lots of slips and rocks. The crews were amazing; they’re all hand-built trails. There’s nothing else like it in the world.”

Each job presents its challenges. A recent one in the Waitangi Forest, next to the Treaty House grounds, involved three iwi, a kiwi-protected area and three-metre-high gorse in a second-generation pine forest. The crew cut their way through with chainsaws while avoiding and respecting burial grounds and areas of iwi significance such as kūmara pits. “It’s a case of working through all the issues methodically. The iwi were fantastic to work with.” Sarah often has had to confront her challenges on her own – there have been several since she launched the business, which caters for all types of horse riding. But solving issues of traffic management on her narrow winding driveway, a rain washout in the arena during construction and unexpected building problems paled into insignificance compared with one event: Sarah’s heart was broken over losing a new-born foal two years ago. Charlotte with Sarah, Gracie and Poppy, the donkey.

“It was the worst experience. For a midwife and a farm and horse-facility owner to lose a foal – it was a real knock to my confidence.”

At the time, Sarah was fostering a tortoiseshell cat and its three-day-old kittens. Knowing that she was distressed about the loss of the foal and seeing the kittens were providing solace, Jeff said, “Why don’t you keep them all?” And she did. 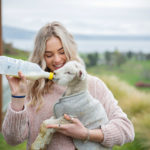 Erika, a fitness trainer in Hamilton, enjoys spending time at Southstar tending to the animals. 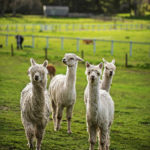 Alpacas are great for keeping the grass down around the bike-trail tracks as they’re light on their feet. Sarah reckons the motley crew look like “surfer dudes” with their long, shaggy fringes. Ruby has given all the alpacas Shakespearean names. 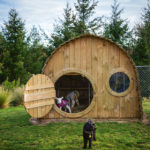 Sarah ended up adopting three lambs in spring. The “Hobbit” house (below left) is just one of the set-ups she has for foster animals. 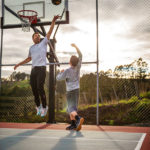 Jeff says he’s grateful that Sarah is so competent and mostly carries the responsibility for the children. Ruby and Samantha have been very involved in drama since they were both six, and Ruby is now at Te Auaha, the New Zealand Institute of Creativity in Wellington, on a three-year stage and screen-arts course. Joseph is into maths and chess. (He’s good at both.)

“Sarah’s amazing,” says Jeff. “She’s giving the kids a taste of different opportunities for the things they could do.” Keagan (centre) and Aaron Baddiley enjoy a break with Jeff at the “pit stop”, where riders stop to snack, chat and toast marshmallows before heading up the hill again.

OFF THE BEATEN TRACK

Jeff’s marketing slogan for South Star Trails is “building smiles — creating awesome”, and as soon as the topic of bikes arises, his face lights up.

“I love getting out there; I’m a good customer of both businesses.” But he’s been changing course recently by helping write the new trail-construction guidelines for New Zealand. These followed ACC’s concern about the increasing number of mountain-bike accidents.

“The idea is to have consistency of grading for the standard six grades. So a grade-three experience here is similar to a grade three elsewhere, or riders can expect a similar level of difficulty.” 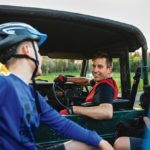 Jeff gets a huge kick from seeing young riders like Lachlan Hogan enjoying themselves. 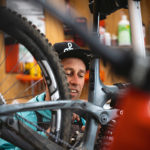 Jeff’s expertise is now recognized globally, and he has been invited to speak in Alice Springs next year at a trail-building conference. southstartrails.co.nz

Jeff and Sarah say that it’s taken effort to make their relationship work at times. Jeff’s tidy, Sarah’s not; Jeff grew up in a structured environment, Sarah says hers was chaotic. She has also been in counseling for 15 years for depression; Jeff never gets depressed and doesn’t understand it.

However, Sarah says their relationship has become easier with time, and they don’t lock horns as much. When Jeff goes away, he has to find his way back into the family. 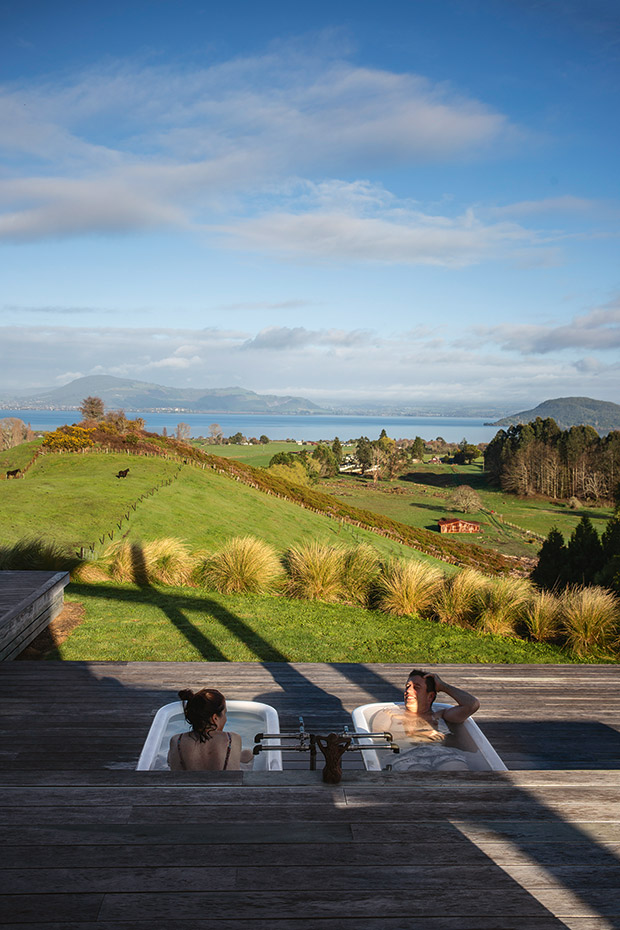 Double baths on the deck, where they chat and debrief, usually naked: “No one bothers you if you’re naked.”

“But it’s getting smoother and smoother as we work out what’s worth arguing about.

“The things that drew us together are still there, and you can have a relationship that works and still have different interests.”

She’s learned to accept Jeff’s obsession with mountain-biking. “He can be out in the garage working on his bike for hours, looking at weighing tiny components, at the angles of his bikes, at different seats, different handlebars. It comes down to the finest details — that’s where his engineering comes in. His love for it is passionate, and it’s why he’s so good at what he does.”