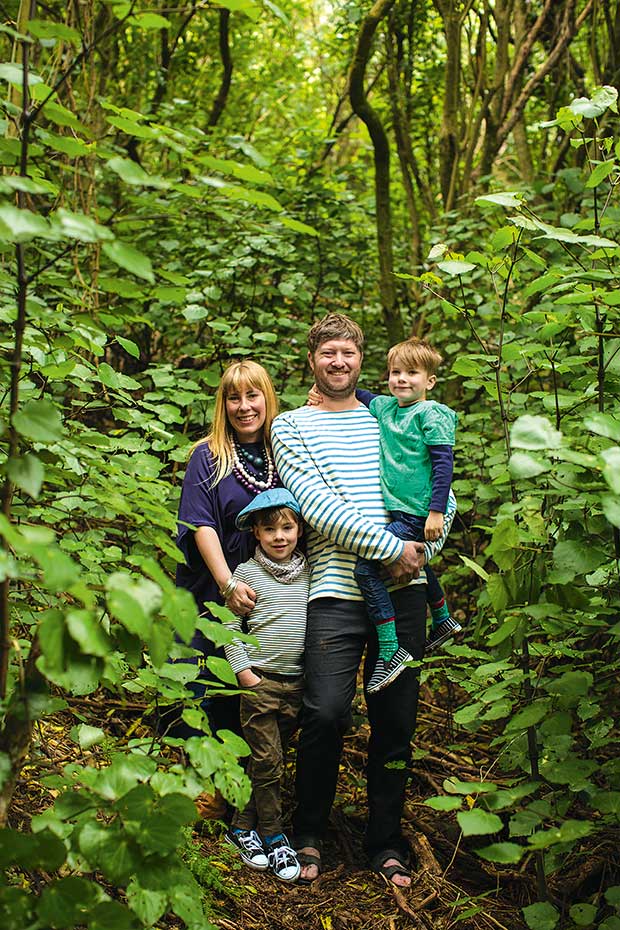 Home for the Hilton family – Laurel, Henry and Ash (holding Truman) – is a paradise for free-ranging kids. “All the neighbourhood kids roam free, the parents take turns feeding the pack,” says Laurel.

When a Texan belle arrived in New Zealand for a three-month holiday, she didn’t plan on meeting a rugged West-Coaster. Thirteen years, two kids and a thriving jewellery business later, there’s nowhere else she’d rather be.

In the beginning, there was a young theatre director, her limbs tanned to nutmeg by the harsh Texan sun. There was also a strong desire to see what lay outside the small, industrial town where she was born, the adventurous daughter of hippies among a sea of conservatives. 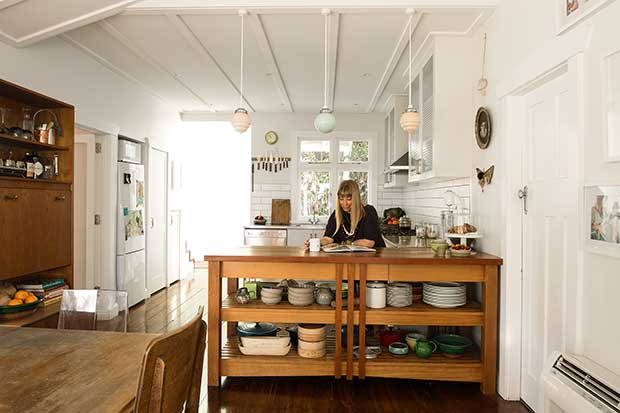 It’s all about family for Laurel and Ash. Ash is one of four siblings, all living in Nelson. Family members are in and out of each other’s houses constantly.

So in 2004, Laurel Hilton threw her restlessness into a backpack and flew to Christchurch where her aunt’s ex-husband was at the time stationed with the United States military.

Laurel was 26, single and in possession of a three-month visa. When a family member offered to fix her up with chef and part-time jeweller Ash Hilton, she wasn’t overly fussed. “I wasn’t looking for a relationship but, as cheesy as it sounds, it was pretty much love at first sight,” says Laurel, now 39. 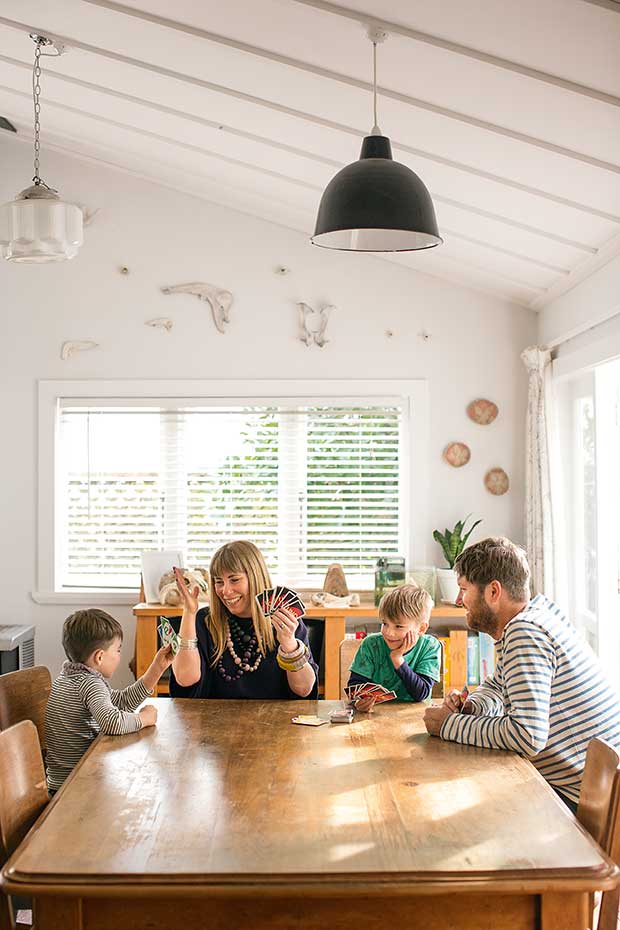 Truman makes the family play Uno almost every day, and he wins every time.

Ash was born on the West Coast and spent the first year of his life in a Wangapeka Valley commune where his non-conformist parents retreated to raise their four children.

He was home-schooled until he was 12; freedom and creativity stitched into his DNA. “Our house was large and messy and filled with books, tools and paint,” says Ash (42).

More stories you might like:
Behind Bleubell Macrame: Meet the Taranaki mum who's bringing back macramé in a big way

“Life was about making your own fun, and we were pretty much given free rein to be as creative as we wanted.” 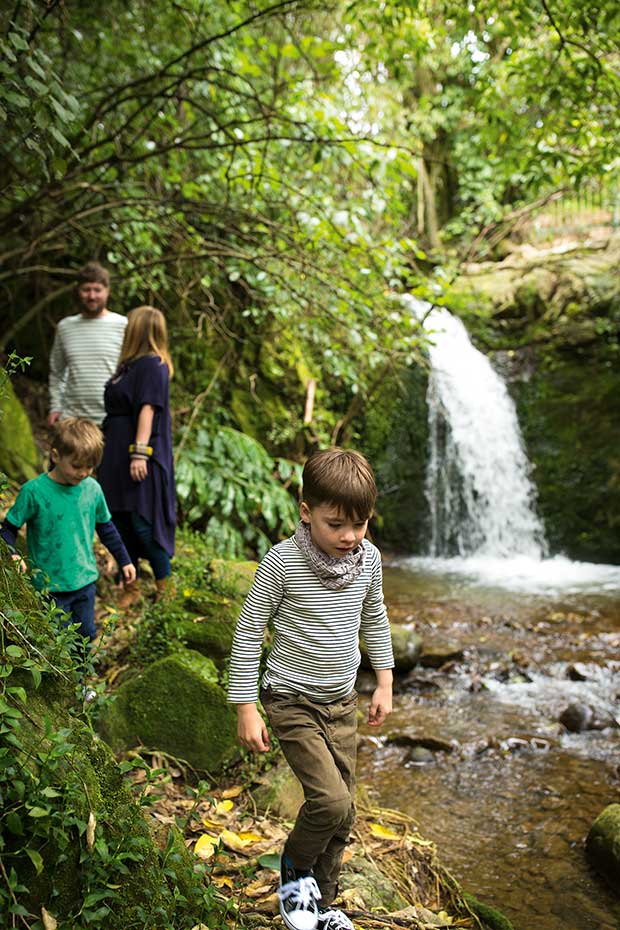 “Glenduan is tiny community by the sea; no shops, just houses and farms,” says Laurel. “All sections on our side of the road back, unfenced, onto a bushy hillside so it’s a kid’s paradise – rope swings, tree huts, waterfalls, rocks to skim.”

When his parents split up, he drifted north to Nelson and, after a stab at a design degree, fell into the hospitality industry. His CV is a busy sort of read: from dishwasher to sous chef, from Wellington restaurants to six years cooking on super-yachts in Europe and the Caribbean.

It was, recalls Ash, a fantastic way to see the world but in 2001, burned out by the travel and long hours, he hung up his apron and returned to Nelson. When his mother suggested a jewellery-making course, it seemed like a good time-filler. “As a child, I’d learned a bit of bone carving from my father and was good with my hands, so I thought I’d give it a go.” 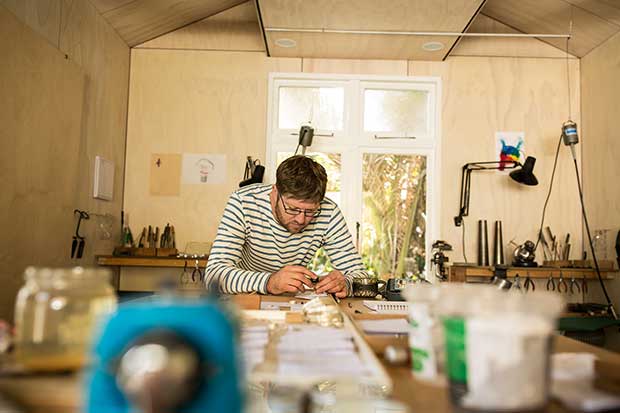 Ash was immediately smitten with the craft he would settle into for life, relishing the opportunity to craft the designs he’d squirreled away over the years.

Although jewellery is a bit of a leap from cooking, he used his super-yacht earnings to rent a Nelson workshop and buy equipment, and he learned from other craftspeople throughout New Zealand. 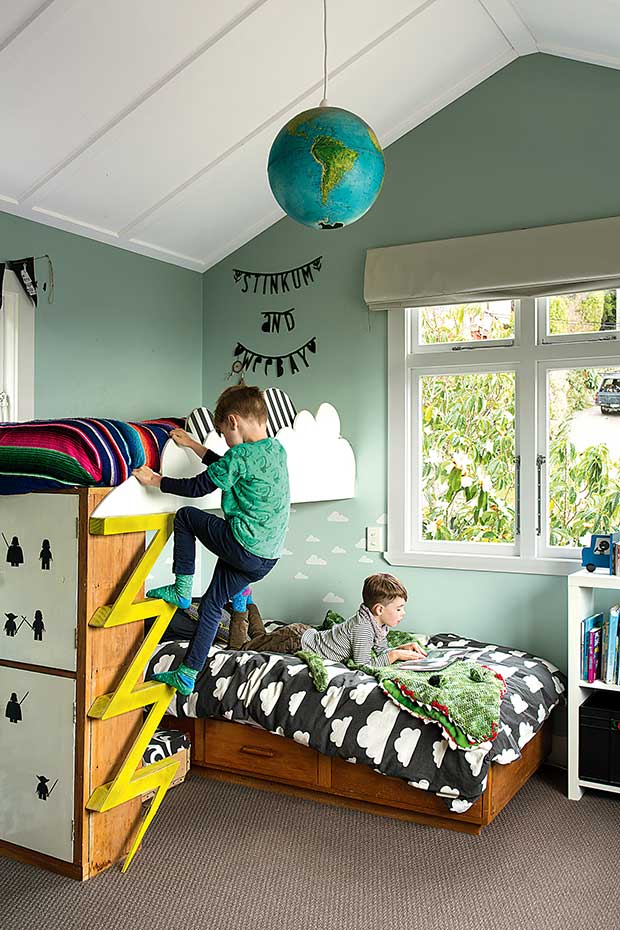 He designed and made the boys’ cloud bunk bed with its lightening strike ladder.

“I started off doing a lot of stone and shell work, as well as some pounamu pieces I’d learned how to make from Nelson jeweller Isaac Ibbotson. I was a bit of a magpie, taking ideas from all over the place, trying to refine my point of difference.”

He stumbled across engraving and despite an early tutor’s efforts to dissuade him, he continued with it. “I was told I didn’t have the skills to engrave, that I should leave it alone. But it interested me, so I figured out a way to do it.” 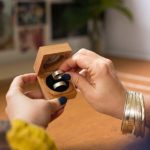 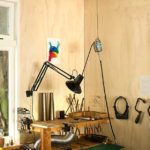 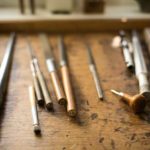 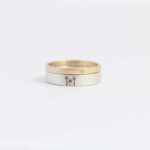 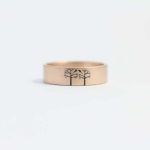 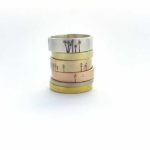 Ash wasn’t keen on copying the florid, old-fashioned engraving paraded across traditional trophies and shields – he was after a cleaner, more minimalist look. “My vision was for subtle figures etched onto gold, silver and titanium… to have the beauty reflected in the simplicity.”

He started with a three-branched pine tree cut into the surface of rings, earrings and broaches, before moving onto cabbage and nikau trees, native grasses and birds. 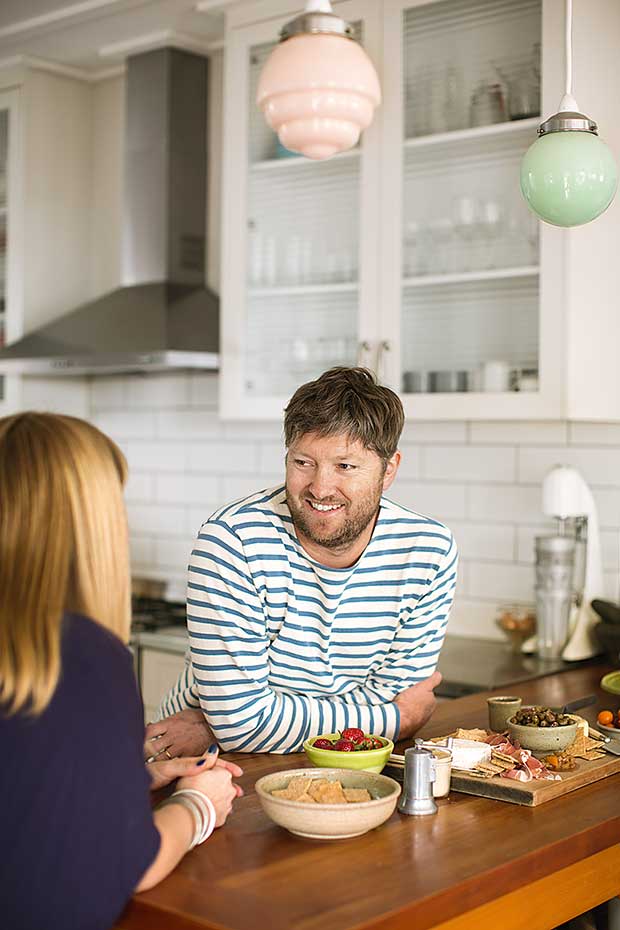 Ash is constantly making things, from masks and costumes for the children to paper airplanes and flying bikes.

These designs now form the core of Ash Hilton Jewellery, a business and brand he and Laure1 (also parents to Henry, 7, and Truman, 5) run from their Glenduan home.

There was never any question they wouldn’t use sustainable materials, including recycled sterling silver, palladium and platinum, as well as ethically sourced gold and precious stones. 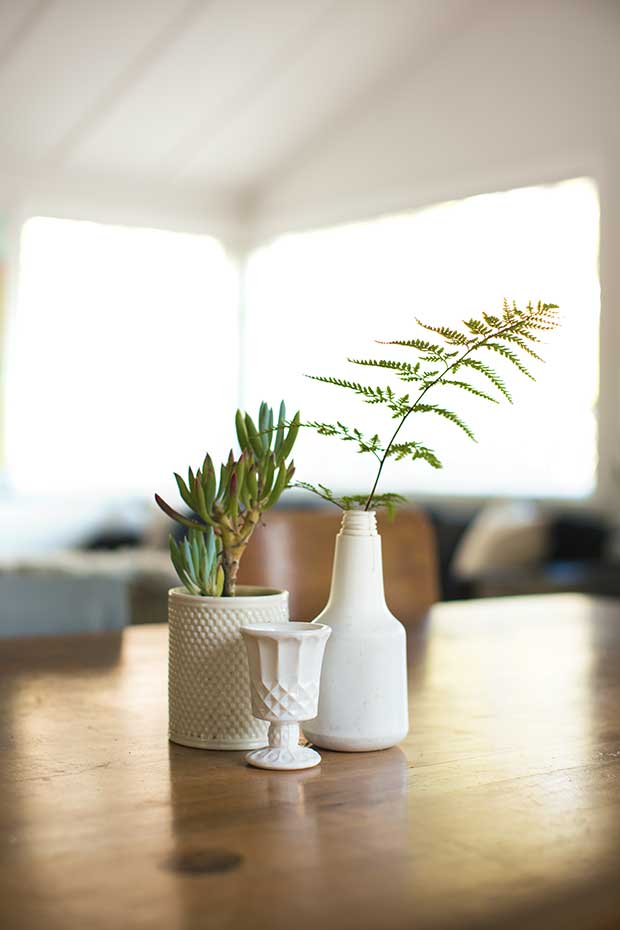 Henry and Truman have found several treasures outdoors, including the white plastic bottle that now lives on the family’s dining table.

“I didn’t know that much about the mining process when I started,” says Ash. “But after researching it, I was shocked at the impact traditional hard-rock mining has on the environment. For example, the production of a single gold wedding ring can generate 20 tonnes of mining waste.” 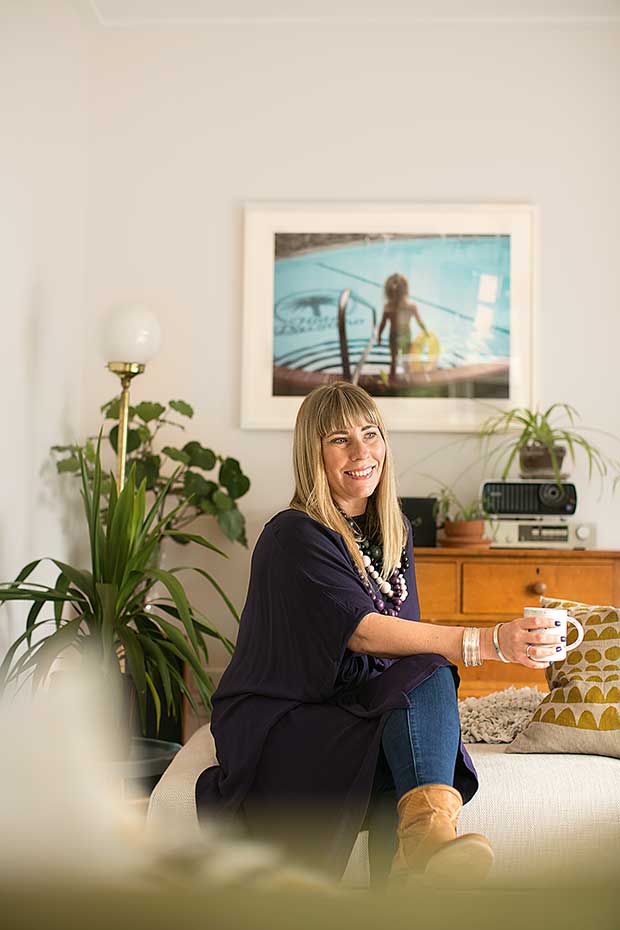 Quite by chance, Ash’s father Jim had once worked with a Coaster who runs a small alluvial black-sand gold-mining operation.

Jim brokered a deal whereby the couple were supplied with New Zealand alluvial gold, which is eroded naturally from the mountains before being collected by hand. 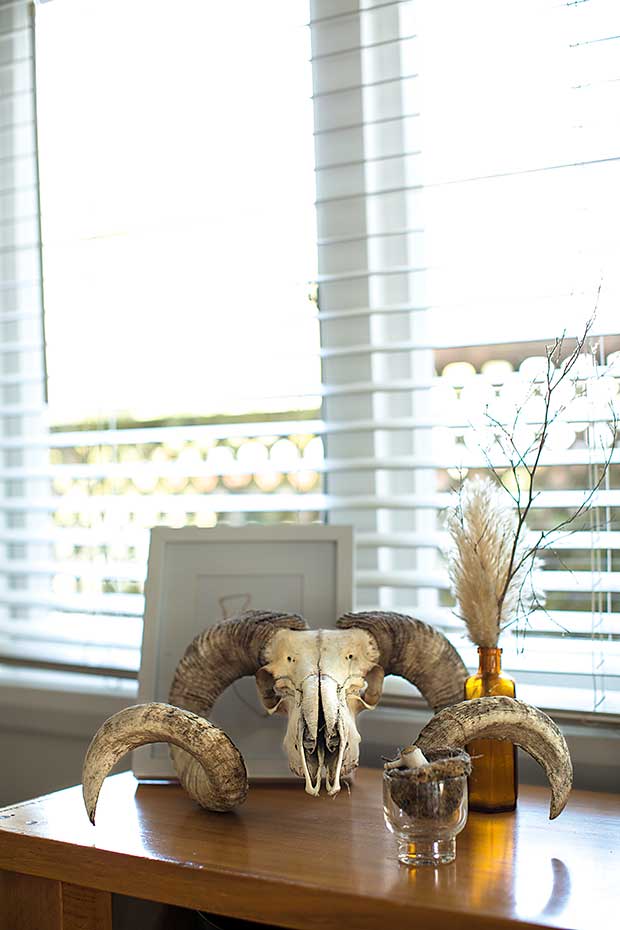 The whole family are collectors, and there are always lots of treasures to be found on the beach and farm tracks around their home. Favourite bones, shells, pieces of driftwood and feathers usually end up on this shelf.

“It’s a tiny operation, literally two blokes, a tractor and a beach, but it means there’s no giant open-pit mines, no displaced communities or mining waste,” says Laurel, a touch of Texas still resting under her tongue.

“We’re really lucky to have Dad hunt down our gold for us because the guys who run these operations are usually quite reclusive,” chimes in Ash. “It takes a special kind of person to be able to rock up and have a yarn and a cuppa with these miners.” 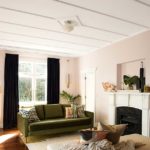 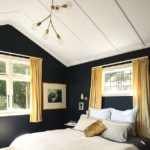 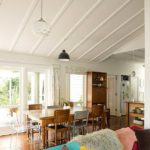 Laurel joined the business full-time nine years ago after a job aligned to her theatre and writing skills failed to materialize. The couple also ran a café for two years, with Ash splitting his time between jewellery-making and cooking duties, while Laurel worked front of house. 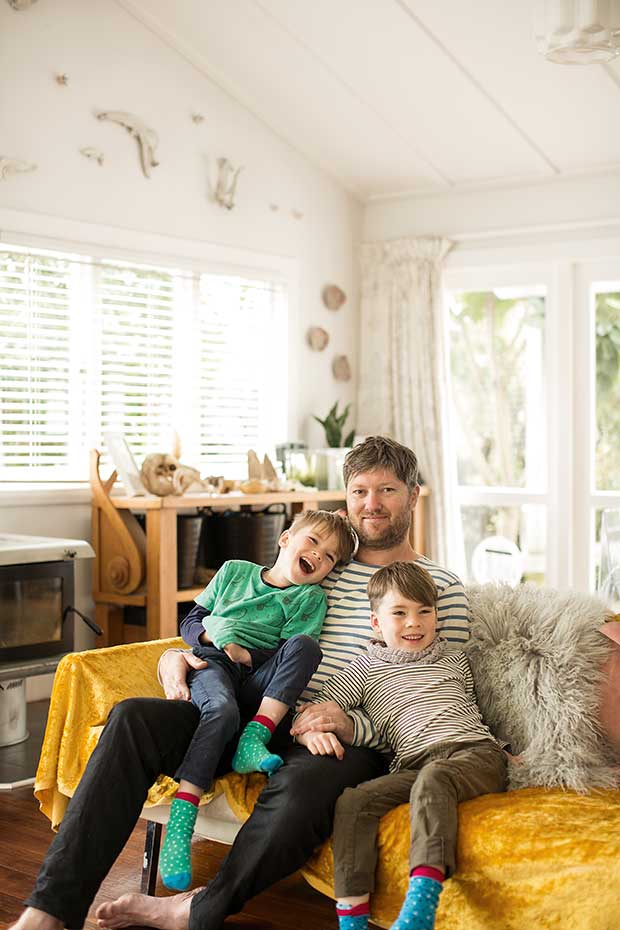 Both the Hilton boys have declared they will be artists/writers when they grow up and their parents couldn’t be more thrilled.

But when the children arrived and Ash’s delicate pieces started to take off, they bought a house with a garage large enough for a studio and decided to focus on the jewellery.

These days, the bulk of their sales, including bespoke wedding rings, comes from overseas (mainly the United States) via their website and Etsy store. Domestically, Ash sells his pieces in 15 galleries throughout the country. 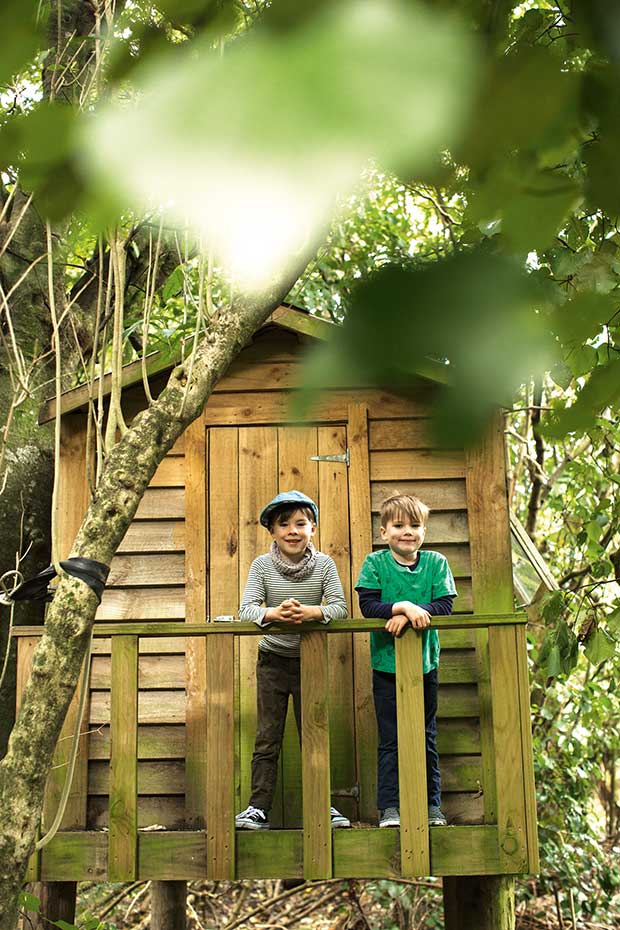 Eldest child Henry is obsessed with interior design shows and renovation, and he’s currently in the process of renovating the tree hut and spent half his total budget on marble floor tiles.

The couple has woven the business around their two sons, and are disciplined about not letting work bleed into evenings and weekends.

“Growing the business is important to us but family is our priority,” says Ash. “We try to spend about 30 hours a week on the business and the rest is for family. It is the perfect lifestyle.” Ash, Henry and Truman are on a mission to clear a shady spot down at the beach for summer days.

HOW TO DESIGN A CUSTOM-MADE PIECE OF JEWELLERY 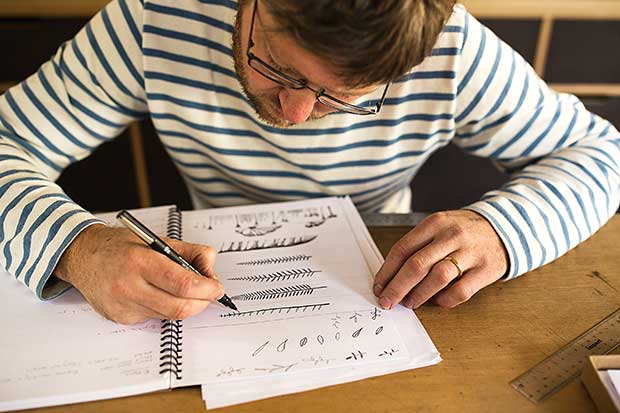 “My vision is for subtle figures etched onto gold, silver and titanium… to have the beauty reflected in the simplicity,” says Ash.

❆ For the best results, convey your aesthetic to a designer by telling them about yourself, advises Ash. That includes what you’re into, where you live, where you’re from and what’s important to you.

❆ Couples often use their relationship as inspiration for wedding rings. Where they met, where they fell in love or some small personal detail that has special meaning for them.

❆ Images are very helpful but don’t limit yourself to Google. Look at other stock photo sites such as Adobe and Getty Images, art gallery websites, the local library, Pinterest and Instagram.

❆ Collect as much inspiration as you can, give it to a designer and then be honest about what you like and don’t like. Their job is to refine ideas down into something that symbolizes you or your relationship. It can be a little daunting at first but also fun.

❆ If you’re designing a piece for someone else, a little social media stalking is a great place to start. Online is good, but you can also find imagery in someone’s favourite album, book or movie.