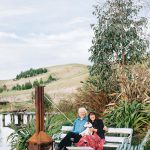 Wine time by the stream (above) where there are plenty of frogs – Helmut loves frogs;

The kitchen cabinetry was built using wood from 30-year-old sheep-yard posts, the green dresser was from a local antique shop, the island bench belonged to Sally’s mother and Sally collects the Buddhas that perch there;.

the mismatched chairs in the dining room were painted and upholstered by Sally and when she has one too many she gives it away. The painting to the right of the doorway was commissioned by Diana in the 1980s and is by artist Don Neilson.

Artmosphere, the couple’s gallery, features the work of more than 80 artists; Helmut’s black and white prints in the gallery are part of a series titled The Forgotten Ones and the wood and metal horned sculptures are by Tracy Skelton from New Plymouth; also on display is a painting by Waipawa artist Gary Waldrom titled Girl and the Horse.

Sally plays guitar in rare moments when she has nothing to do.

Heavenly inspiration in the form of a cross collection beside the guest bed.

Willa’s pink bedroom is her haven. Will she follow into art like her mum? “No,” she says, she’s planning to be a midwife.

Sally Maguire’s dog knew a thing or two when it introduced its owner to the love of her life, Helmut Hirler. They walk us through their beautiful home and art gallery, ‘Artmosphere’ .

When Helmut Hirler was carefully setting up to photograph a shell on Waikanae Beach near Wellington 10 years ago he had no idea his life was about to be blind sided by a small dog and her owner. “Bluebell nooooo…” shouted Sally Maguire as her pooch hurtled towards the tall man with his camera and tripod, completely wrecking his shot.

Sally Maguire and Helmut Hirler on a typical day (for them). There’s a Zen saying: “Before enlightenment, chop wood, carry water. After enlightenment, chop wood, carry water.” It could apply to Helmut whose passion is to collect, store and build with wood. “We have three fireplaces so we need plenty.” The painting studio (below) that Helmut designed and built for Sally was made from an Oregon pine tree. “I bought the tree from a farmer and helped mill it,” he says.

Helmut had parked up for the night at the beach hoping to catch the morning’s first soft rays of light. He was nearing the end of a three-month tour through New Zealand, starting in the South Island and working his way north. A few more days and he’d be on the plane and home to Germany. 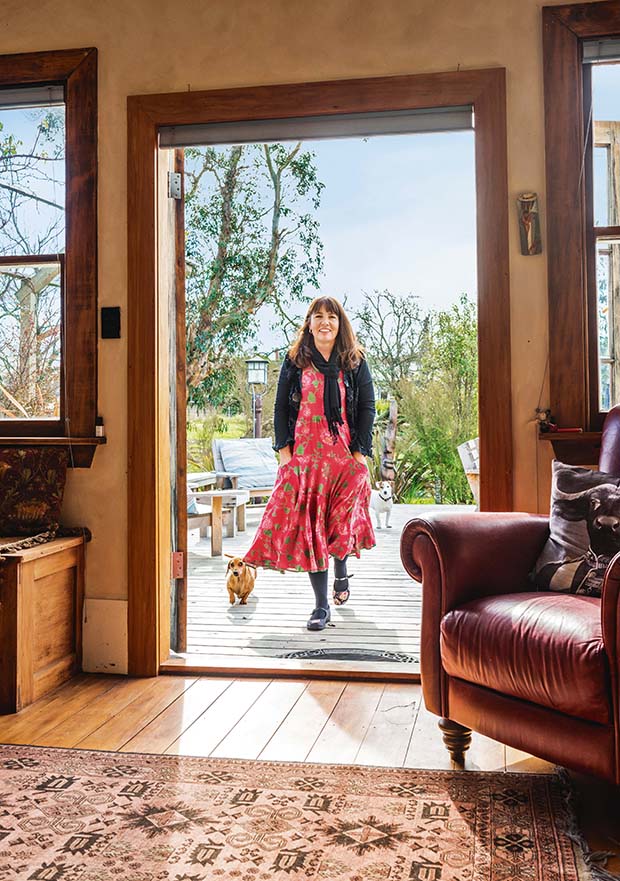 The dogs – Olli the jack russell (who belongs to a neighbour and returns home each night at 8.30pm) and Cocoa the dachshund – follow Sally into the living room. The red leather chair belonged to Sally’s mother Diana.

The body of work he’d amassed was for a book about New Zealand, photographed in his trademark black and white panoramic format. Artist Sally had spent the morning at her easel but nothing was going right. A walk on the beach usually cleared her head. Always keen for a distraction Bluebell bolted out the door with Sally rushing after her.

More stories you might like:
How young creative Sam Mathers flipped his graphic design career to pursue art full time

Call it fate, call it what you will, since that day – 2 December 2006, (Sally remembers it almost to the minute) – she and “Helly”, as she calls him, have been together. “I invited him back to my place for a wine and we discovered we had so much in common and our work covered similar themes. I do a lot of African paintings and he had many photos from there too. We both share a love of derelict buildings and vehicles, roads less traveled and angels in cemeteries.”

Fast tracking through the decade since: Sally and Helmut first had to overcome immigration issues (it was a challenge for Helmut, who was 53 at the time, to gain that status); then he had a cancer scare; then their art gallery Artmosphere that they set up in Woodville in 2009 lost traffic due to the Manawatu Gorge closing for a year. So in 2012 they decided to sell and relocate to Hawke’s Bay where the warmer climate appealed to them both. Having bought a 100-year-old farmhouse, they had it transported to their lifestyle block on the outskirts of Waipawa then spent a year renovating, thus creating both a gallery – also called Artmosphere – and a home for themselves and Sally’s 16-year-old daughter Willa.

Being surrounded by art – the gallery features the work of 80 artists and also includes their own work – is a dream come true for Sally. “I always wanted to live in an art gallery and at age 52 it’s finally happened,” she says. She had always painted for fun but about 20 years ago decided to dedicate herself to it full time. “At first I thought, ‘Oh god, what do I think I am doing?’ But when I sold my first painting for $50 I was beside myself with excitement.” “For me, painting is like meditating. I can’t sit still for a minute but having a paintbrush in my hand calms my mind. At the moment my favourite subject is clouds or scarecrows but hang on… actually, my biggest passion is portraits and while they don’t sell so well, if I could just paint portraits of children that’s what I’d do.” 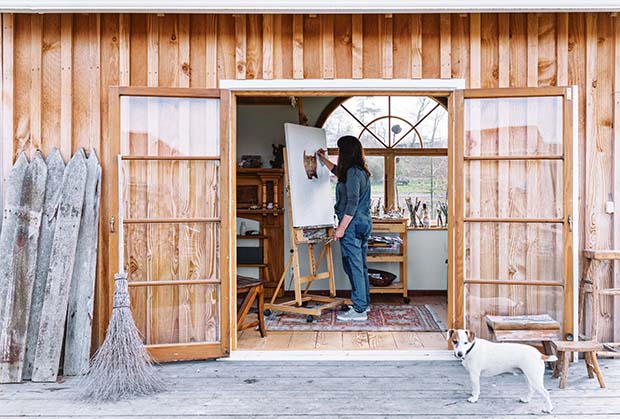 Sally says her mother Diana Maguire was a big influence. The family, originally from Yorkshire in England, traveled because of her engineer father’s work and they lived in Portugal and Yugoslavia, as it was known then, before settling in New Zealand when Sally was 10. “Wherever we went we were always surrounded by paintings. Mum loved and collected art and did it as a hobby.”

Nowadays when nearly everyone owns a digital camera Helmut, who is acclaimed internationally for his work, still prefers to use a film camera – one of his most treasured is a Linhof Technorama large-format camera – and processes all his film in his own darkroom. “Nobody has a clue how to handle black and white film. You don’t get the quality you expect, especially today.” His meticulous approach is reminiscent of old-school craftspeople such as legendary American art photographer Ansel Adams, one of Helmut’s heroes.

Spending hours in the freezing cold waiting for the light to “sing” or trekking to a remote location loaded with camera gear is all part of his quest to create images that make the viewer want to jump into the frame. Sally says, “Helly is very modest. He will never tell you how many medals he’s won. Another one will arrive in the post and I’ll ask, ‘What’s this one for?’” In 2015 and 2016 he won the prestigious Gregor International Calendar Award and he still divides his time between Waipawa and Europe to do photographic assignments. 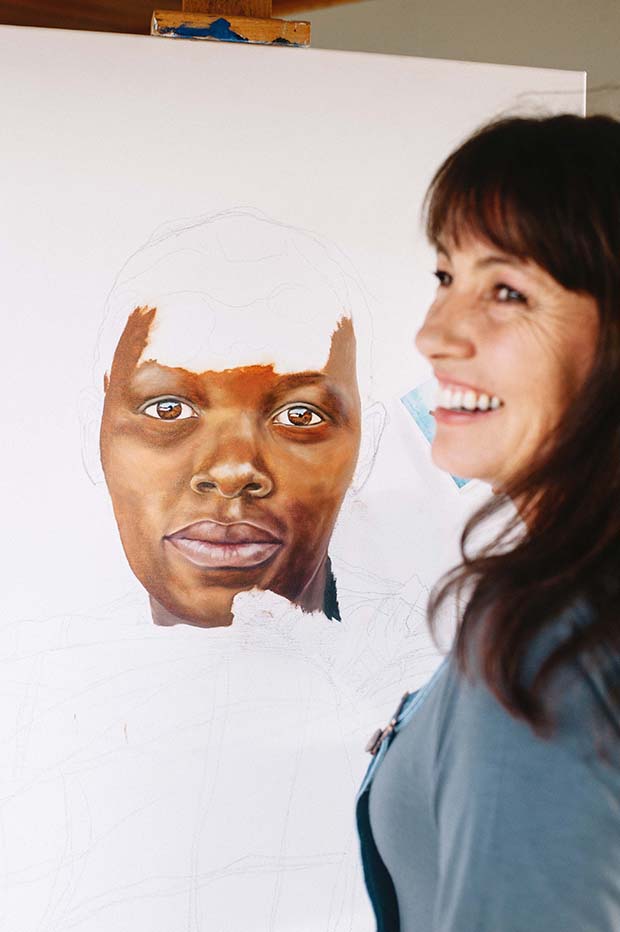 Helmut, like his “soul mate” Sally, crams as much into a day as can possibly be crammed, such as tidying up their property after a storm, neatening the borders of the garden or just tinkering about. Since moving to Waipawa, he’s discovered a passion for milling and gathering wood – and has a neatly stacked woodshed as evidence. Helmut built Sally a Swiss-style studio so she can secrete herself away to paint in peace. That’s often interrupted however. “I’ll say to Helly, ‘you’re on duty in the gallery today’ and he’ll be mucking around in his shed with his earmuffs on and I’ll be painting away, then visitors will arrive and I’ll think, ‘so it’s me who is on call’.”

But mostly, the couple manages to strike a harmonious balance. “We’re a great team,” says Sally. “We encourage and bounce ideas off one another and get enthusiastic and passionate about whatever it is we do. Though I must admit, with all my crazy ideas, I’m a bit like a kite and Helly is the person who holds the strings, but he’s never controlling, which is why we are so happy. We can be together but we also like to do our own thing.” Together is how they choose the art for the gallery. “We struck an agreement early on that we had to unanimously agree on a piece of work. If one or the other doesn’t like it, then we won’t accept it,” says Helmut.

One of the wonderful things about Artmosphere is the many friends they’ve made. “Meeting such fantastic people – both artists and friends – is not like running a business. It’s like being part
of a big family. We understand artists, how they work and why they haven’t painted for months. Or are pleased to see people who remember us from Woodville and come and look us up. A lot of
coffee time goes on around here. Some might think it’s a crazy lifestyle, but we wouldn’t have it any other way.” Sometimes a picture is worth a thousand words. German football charity BigShoe11 recently commissioned Helmut to document the plight of children at Ifunda Mission in Tanzania, Africa. He and Sally and a team of doctors spent a month doing voluntary work there in June this year. The photos in Helmut’s album are heartbreaking and disturbing; many are of children who have had accidents or have birth defects and have not been able to get medical assistance. An exhibition of Helmut’s work will be staged in Germany to raise funds for further medical work and basic resources. Sally and Helmut are also setting up a fund to support the Ifunda Mission, which will help build concrete closed fireplaces to keep children safe. “Most of the homes are mud huts and the fire is open in the middle of the floor,” says Sally. “It only costs $55 to build a secure fireplace. It costs so little but will help so much.”