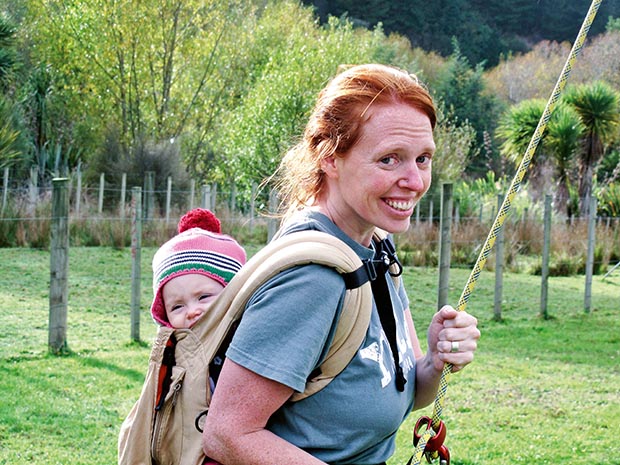 Meet an eco-thrifty, sustainable family who only need to work part-time, have an average monthly power bill under $30, and eat from a permaculture pantry that grows right up to their back door.

This story first appeared in the February 2014 edition of Lifestyle Block.

The light, warm centre of the Lebo’s house in Castlecliff used to be the place they avoided. They nicknamed it ‘the dungeon’ before Nelson transformed it into their living room. Broken windows were covered with roofing iron, wallpaper hung in shreds, and there was a hole in the floor through which a mystery squatter came and went. But that was in 2008 when the section and house was arguably the most dilapidated property in Whanganui. It took the family 20 months to renovate and develop an affordable lifestyle with a low ecological footprint. The house and garden are now classrooms for the couple’s workshops, energy saving, permaculture, eco-renovation and organic gardening, which they run through their Eco School.

“We have consciously chosen to share our home and our lifestyle with the community as examples of affordable approaches to sustainability,” Nelson says.

How they reached this point is well documented on their blog – Eco Thrifty Do Up – which also serves as an ‘eco-thrifty’ learning tool. Next door to the Lebo’s home is the community garden, set up (with permission) on a vacant lot.

For several months they had just one power point and would cycle to the local surf club for showers and drinking water. Dani gave birth in newly renovated living room and today the floor is strewn with toys, but there is no plastic, flashing lights or things that make noise. Dani says their daughter creates her own special effects.

“It was the solar potential of the site that attracted us, and all of this space,” Nelson says. ”We can walk straight out into the pantry.” The ‘pantry’ is an intensively composted and planted, north-facing garden. They can also walk to the beach, the reserve, the bus stop, Plunket and kindy, and there is no through traffic in the quiet cul-de-sac. Nelson has turned their home into what he calls an active solar house. There are passive thermal features but it needs them as owners to be actively involved, following the sun around the house. He gets up several times during the conversation to close some curtains and open others, put up blankets on some windows and take others down. It’s a nippy spring day when we’re talking, but inside their house it’s 23°C.

At the start of the project Nelson redesigned the orientation of the windows and the position of several rooms to allow sun into the living and kitchen areas throughout the year. He piled masses of insulation into the roof cavity and some of the walls, double-glazed windows using a variety of DIY and more technical methods, and made curtain blankets which add another thermal layer to the windows. 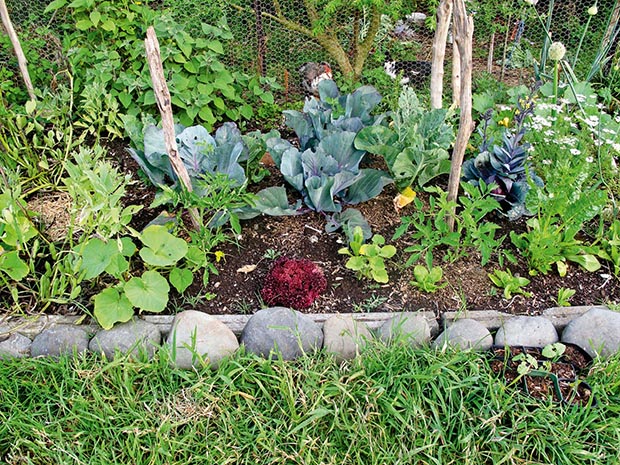 Transitioning from winter to summer gardens.

Solar panels on the roof supply hot water, and in winter the family showers in the afternoon when the sun hits the bathroom, raising the room’s temperature to 22°C on sunny days.

The house has passed many building inspections, and Nelson picked up skills from tradesmen who were prepared to work with him. He completed a PhD in science and environmental education from Waikato University which he wrote while doing the house renovations. “I can only sit on my bum writing so many hours a day. I need [practical] projects to work on,” he says. 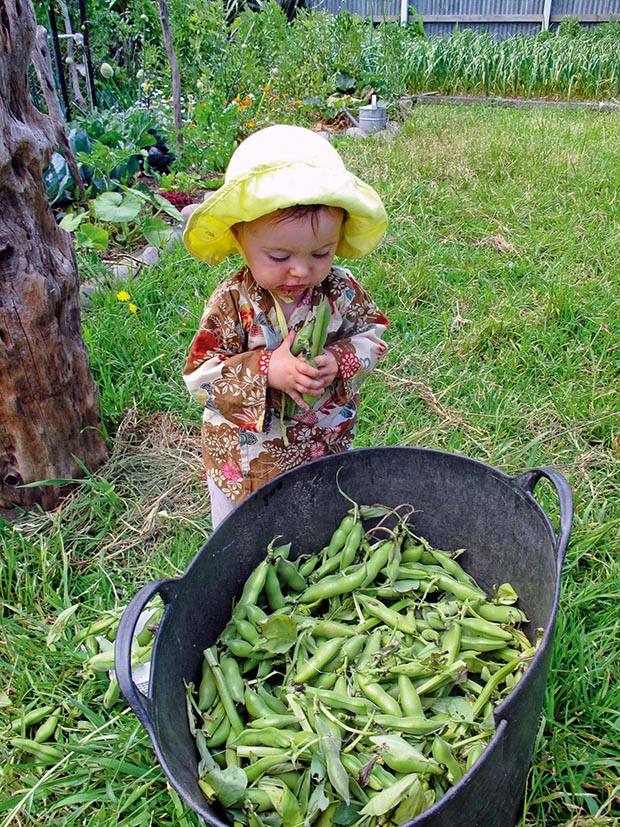 A Shacklock stove he bought on Trade Me sits inside a brick jacket, ready to be fired up for next winter’s heating and cooking. The bricks warm the room with heat they retain both from the sun shining through the kitchen window and from the fire.

Outside, pumpkin simmers on the solar cooker. Nelson bought the cooker in Ladakh, India seven years ago. It packs down to 15cm x 5cm x 90cm so it can fit inside an airline bag, and consists of aluminium fins and a galvanized steel frame, all held together with about 200 fasteners. The Lebos have used it to cook everything including veges, rice, bacon and eggs, and apple crumble, and even roasted a leg of goat for four hours, cooking it with home-grown onions, garlic, and rosemary. 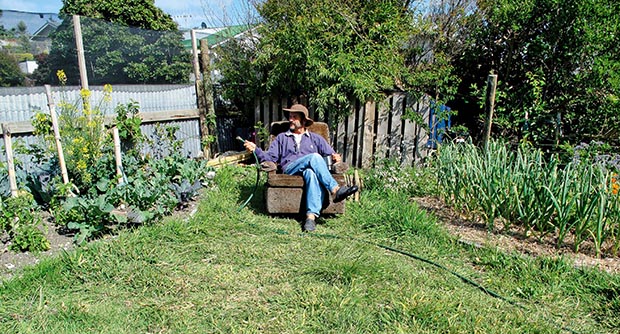 The best thing about permaculture is it’s great for the ‘lazy’ gardener.

The electric stove comes in handy between seasons, but for items such as Verti’s purple sugar-free (apple and blueberry) birthday cake, Dani was happy to use an oven.

Making use of the free energy from the sun is just a small part of the couple’s lifestyle. They decided to spend time with Verti during her formative years, and are involved with a Steiner playgroup and an innovative local school. They do less paid work, earn less money, and enjoy themselves with friends at home or in the outdoors rather than eating out or going to the movies. But the way they re-use and recycle resources and grow their own food is also a form of wage, says Nelson, with their power bill averaging $30 or less per month. The muscovy ducks work as snail hunters and lawn mowers.

Dani works part-time at the Whanganui YMCA. She has a Master’s degree in international education and was a Spanish teacher back home in New Hampshire, USA where the couple met. As well as meeting the demands of motherhood and paid work, she does graphic design and PR for their workshops and various creative ventures that include eco-thrifty toys. Nelson, a teacher with 20 years experience, holds seasonal workshops through the Eco School, does home energy audits and consulting, and writes a pro bono, weekly column in the Wanganui Chronicle.

“People think that eco-thrifty is about giving things up,” Dani says. “[People ask] ‘don’t you miss doing this or that?’ Wouldn’t it be so much easier if you could use disposable nappies? Don’t you miss not having a dryer? No, we don’t. For me it doesn’t feel like that. Every time we make a choice we are thinking of Verti and her future. We have cloth nappies and when we travel people say ‘what a pain,’ but somebody would have to clear up that [disposable] nappy. Maybe it will be my child, maybe it won’t.” 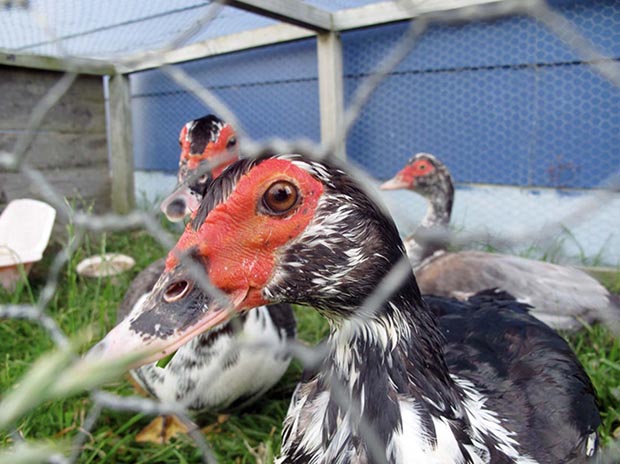 She says an eco-thrifty lifestyle is about what they gain in being with their daughter and spending time in the garden. “I’d give up my dishwasher for that!”

Plants thrive on their land and on the vacant section next door where, with the owner’s blessing, Nelson has established a community garden, pouring 8-10cm of topsoil over sand and replenishing it regularly with compost and sheep manure. He has planted over 100 fruiting trees including plums, peaches, apples, figs, guavas and grapes, and there are always plenty of seasonal vegetables. 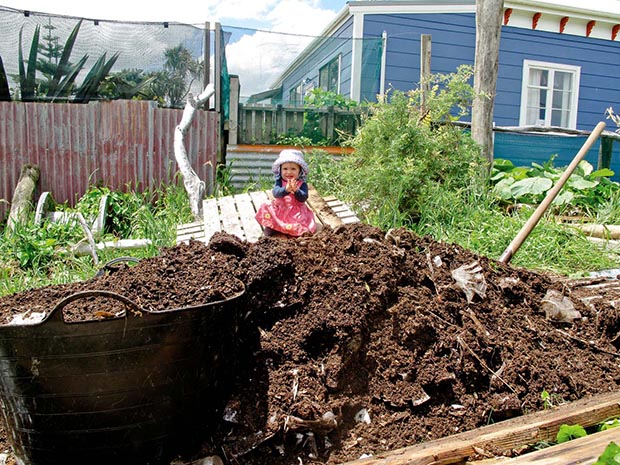 Hot compost is the secret ingredient to this garden’s success.

It’s not without the climatic challenges of sea spray and wind. The property is about 150m from the shoreline so Nelson has built massive fences using roofing iron, topped with shade netting to about 2.5m high, and planted hardy griselinia to protect fruit and vegetable plants from the prevailing wind.

Stone fruit are not easy to grow in this region, so the locals tell him, but Nelson has nurtured Black Boy peaches to an amazing size and state of ripeness. He also grows what he says is “the world’s best garlic.” Customers who buy the $2 heads from the REBS stall at Whanganui’s Rivertrader’s market must agree. Last year he planted 250 bulbs, and this summer he has doubled that amount.

“I sold 80 in one day. They’re large and flavourful, the best tasting ever,” he says. 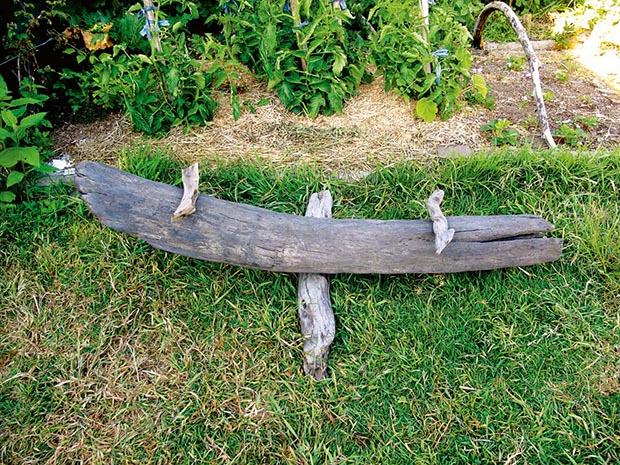 A seesaw made of one of Nelson’s favourite resources: driftwood.

Their pumpkins produced massively, both in size and quantity last year, and early tomatoes were also a good cash crop. A cauliflower tipped the scales at 4kg, broccoli at 3kg, and a red onion weighed in at 1.2kg.

“Hot compost produces really vibrant plants. We also tractor our ducks and chickens around every day and they fertilise the grass. We don’t mow the lawn in winter and scythe it in summer to use for mulch.” Turning the compost is hard work, so Verti takes a break.

A cob pizza oven sits inside a little roofed shelter that Nelson made with materials from the old house. Other more whimsical structures have popped up around the section, such as two huts for Verti, a table, and the driftwood tail of a sounding whale at the gate. Nelson’s workshops include tutorials on the many uses of driftwood.

His career as an educator, living what he teaches, has evolved through some life-changing experiences. As a teacher of environmental science at a secondary school in New Hampshire, he tried to engage students with learning that was “real, relevant and inspirational.” He took them to meet “the greenest people, the coolest houses and the greenest businesses,” such as Abby Rockefeller’s eco-farm, 50km from the school. A semester teaching in Ladakh, India was inspirational. “People living 4000 metres above sea level in a desert, few trees, no coal, oil or petrol, and closed off by snow for seven months of the year. The only road goes over the Himalayas. Sun and earth are the only natural resources, buildings are made of rammed earth and glass and the walls are three feet thick. They have solar electricity and composting toilets.”

He thinks some developing countries are good role models for high resource-consuming economies, which he likens to reverse aid. However the Ladakhians were surprised to hear that back in the land of fast cars and electric appliances, Nelson’s lifestyle in an 18th century New Hampshire farmhouse was much closer to theirs. He too had a composting toilet, solar power and tried living off the land, but the cost of US health insurance made a low-income lifestyle impossible. An eco-design course in Costa Rica and a permaculture course in Nicaragua helped Nelson crystallise his next life goal. “To take my unique skill set and experiences and try to promote a new way of teaching and learning science in the context of permaculture practices.”

Biology, chemistry, physics, hydrology, and even meteorology, can all be taught in the everyday environment he says, and it is relevant to students.
In 2008 Nelson sold the farm and flew to New Zealand where he began a PhD at Waikato University. Dani followed and they lived in a caravan at Solscape backpackers in Raglan for two years while they worked and Nelson studied, but they needed a home.

“One day on Trade Me I looked up Castlecliff and found 20 houses under $100,000. We had already made friends in Whanganui through housesitting and wanted to be near the beach for surfing.” Now there is a house, a garden, a daughter, friends, community, some paid, and plenty of unpaid work, giving them a lifestyle with enough money for present purposes. They are also in the process of adopting either a New Zealand or a Chilean child.

“We just don’t feel right about putting more pressure on the earth by bringing an extra child into the world when there are so many children out there,” Dani says.

And what about Verti’s future, when the potential effects of climate changes seem overwhelming? “It’s really hopeful that there’s this little girl, and who knows what she’s going to do in her life. We hope that in the future she does contribute to making the world a better place and that she’s happy when she does it.”