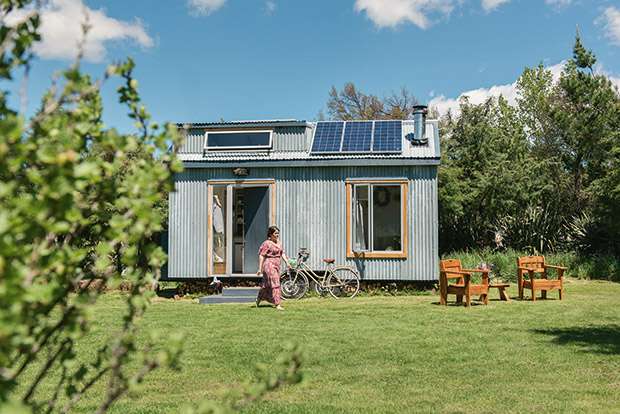 Marie wanted a home that fitted in with its Mackenzie region environment, so she designed the 6 x 2.4-metre dwelling to have the look and feel of a large shepherd’s hut.

Marie Pourcel wakes each morning to goats bleating outside her tiny home in Burkes Pass. It feels like a million miles from the apartment and office job she left behind in France’s fourth-largest city.

A move into a tiny home can involve a lot of head-scratching on how to downsize belongings. Marie Pourcel had the opposite problem. After living from the boot of her station wagon for a year, her move to a tiny home could be considered up-sizing; she had to work out how she was going to fill it.

Marie, 31, arrived in Aotearoa from France two years ago with only a 12-kilogramme backpack, which was just big enough to fit her clothes, hiking boots, an English dictionary and a bottle of bugspray (she’d been warned of Southland’s sandflies). 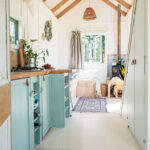 When shops closed during the national Covid-19 lockdown, Marie couldn’t buy the khaki paint she wanted for her kitchen, but she did find a pot of duck-egg blue in builder Dave Taylor’s shed. 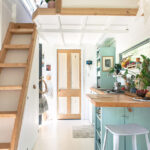 She intended to use it as a primer but fell in love with the colour, and it remains. 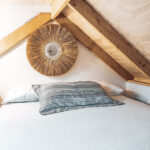 When friends gather at Marie’s, they picnic on the floor, perch on the staircase, or eat outside; she found her straw mirror above the bed at the Cromwell Hospice Shop. It cost her $5. 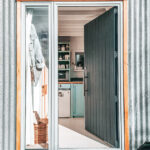 “I headed to Hawke’s Bay and bought a car and started living in it. It wasn’t even a van — it was a Mitsubishi station wagon. It was an old car but I loved it.”

Moving between the country’s DOC campgrounds, free-camp areas (and the occasional driveway), Marie found life on the road liberating. The southern France native left behind an apartment and a job in property management in Toulouse because she felt stuck in a rut. “I decided to quit everything; I was so stressed. I had friends that wanted to come with me to New Zealand, but I told them I needed to do this on my own. I was also going to turn 30, so maybe this was my turning-30 crisis.”

Life, with New Zealand’s mountain ranges and beaches as its backdrop, was good — that is, until winter hit. Now in Central Otago, she began to notice the frost crawling up the station wagon’s windows, and clouds of her breath hung over her oatmeal. “I told myself, ‘I think it’s time to find a room in a real house.’” 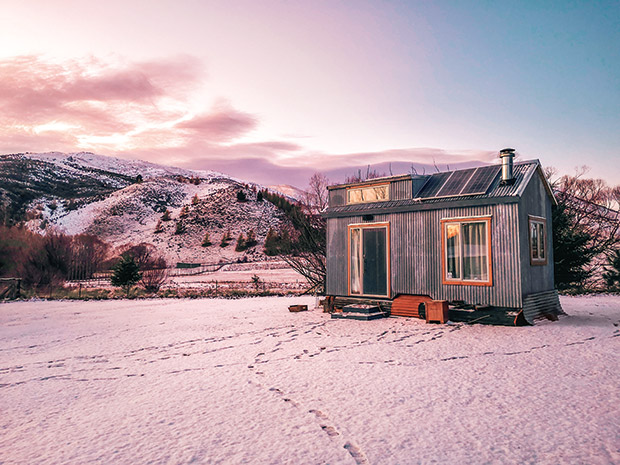 Winter in Burkes Pass — a photo captures the first snowfall on the house, which was built around windows sourced from an earthquake-destroyed building in Christchurch.

Previously, in summer, she had parked at Lake Tekapo for a few nights, waking to the sight of the region’s famous purple lupins. A job offer from Tekapo’s Four Square and a warm room in a flat presented the ideal opportunity for Marie to return as winter set in.

In late 2019, she was in Christchurch for three weeks waiting for a new work visa to arrive when she got hooked on the idea of building a tiny home after connecting with a fellow French traveler who was living in one.

“He happened to be going away that week, so on the first day I met him he just gave me the keys to his house.” Marie said that after three weeks living in his tiny home she was sold (although the composting toilet did take a little getting used to).

Her first day back at work in Lake Tekapo she told her co-workers that she was going to build a tiny house herself. “I don’t think they believed me, they all sort of smiled and said, ‘Oh, good on you.’ I don’t think they thought I’d do it.” 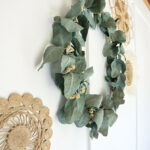 The wreath on the wall is home-made, crafted from a eucalyptus branch. Marie also repurposed the table mats as wall art; her favourite thing about tiny living is that it brings in the outdoors, especially in summer. 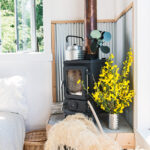 The fireplace, lined with corrugated tin found by Dave, was used regularly in winter to heat Marie’s evening cup of tea or meal. The coldest it got was about minus-eight degrees Celsius.

But Marie had a clear vision, and she set out to find a trailer to build her home on wheels. Only residents and citizens can buy homes in New Zealand in which to live, but as tiny houses can be built on wheels, they’re frequently classified as vehicles. Marie’s mechanic directed her to the owner of a woodwork and antique store called Three Creeks in Burkes Pass, roughly halfway between Lake Tekapo and Fairlie. Among a collection of classic cars, old farm machinery and macrocarpa slab furniture, Marie found Dave Taylor.

“I was there to ask for his help building a trailer, but then I found out he used to build shepherd’s huts, which are basically like smaller tiny houses. He was keen to help me build, so I felt pretty lucky.” Dave is a true craftsman, Marie says. “I’d show him rough sketches of an idea I had for a part of the build, and he would look at them and nod, and then two hours later I would come back and he would have built it.” 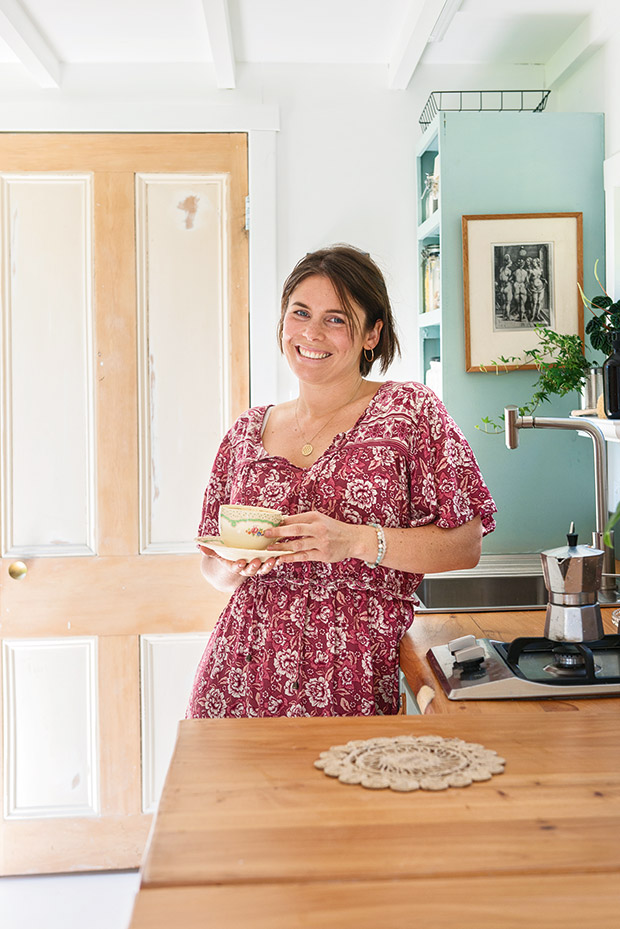 The design for the tiny home was planned around windows Marie found in Christchurch, saved from a house destroyed in the 2011 earthquake. Her find set the theme for the project: everything inside it is second-hand, from the corrugated iron to the paint and sheepskin rugs — even the sink and her doormat.

Marie became such a regular visitor to the Timaru Hospice shop (just over an hour’s drive from her flat in Lake Tekapo) that she started volunteering there twice a month. A list was pinned up of the second-hand items she needed, and she would regularly get calls telling her someone had just dropped off a fridge, or a rug, or a lampshade. It felt a bit like a treasure hunt. 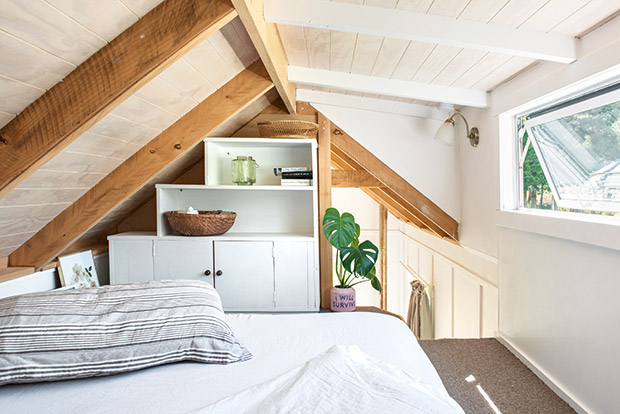 Breakfast is often enjoyed with the birds; the bedroom’s ceiling height is 1.3 metres, just comfortable enough to climb into bed, Marie says. She keeps her clothes in the space under the stairs (not unlike Harry Potter).

The build for her 6 x 2.4-metre home took about seven weeks, and its most complicated aspect wasn’t construction, but finding a place to park it. “Tekapo is touristy, and not many people want a shepherd’s hut on their lawn,” Marie says.

Lockdown threw a spanner in the works, too. Dave and Marie had made the tiny home self-sufficient, but a special plug for her solar panels didn’t arrive in time before the country shut down. Marie had to wait it out in Tekapo, and work on her near-finished home paused. Marie’s furry neighbours like to devour offerings from her compost (kept in an old cake tin). Their favourites include cabbage and broccoli.

Post-lockdown, Dave got chatting to his neighbours in Burkes Pass, who said Marie was welcome to park on their property and plug into their power. Her shepherd’s hut-style home now faces the mountains, perched in front of a paddock with chickens, goats Pete and Percy (who bleat each morning for food), and a small herd of alpacas.

More stories you might like:
Editor's picks: 3 preposterous crime podcasts and a right royal rumble with the Catherine the Great mini series

“Coming from landing in New Zealand with a backpack then living in my car, I could never have imagined this. It’s a dream. I have so much space. It took me a while to gather enough things to fill the tiny house.”

There was a bit of trouble with her water pump when she first moved in, and then her pipes froze, but it was nothing a shower at work and some dry shampoo couldn’t fix. Other than that, rural life has been idyllic. She kept busy in winter, potting at her benchtop. 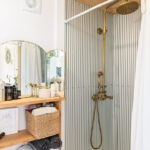 Dave found the shower head online. “We both have very similar taste, which is great. It’s been a bit like a father-daughter relationship”. 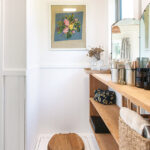 Composting toilets aren’t as off-putting as one might think. “No guest has been afraid to use it,” Marie jokes.

“I was making ceramic mugs, but because the clay and glaze is different to France, it’s been a learning experience. One of my mugs exploded inside the kiln in Timaru.”

This summer, she has her sights set on more travel around the south. She recently bought a 1980s camper van and has challenged herself to rebuild its interior. “I want to build everything for myself this time. It’s going to be my tiny tiny house.”

Certainly, it’s more spacious than living from a car boot, although as she’s learned, any space can feel like a home regardless of size.

“It’s important to know you can handle living in a small space, especially if you are going to share it with someone else. Some friends thought they were into tiny houses, but once they saw mine, they decided it would be too small. It’ll also prove that you can cope with a composting toilet, which are very clean and fine to use.” 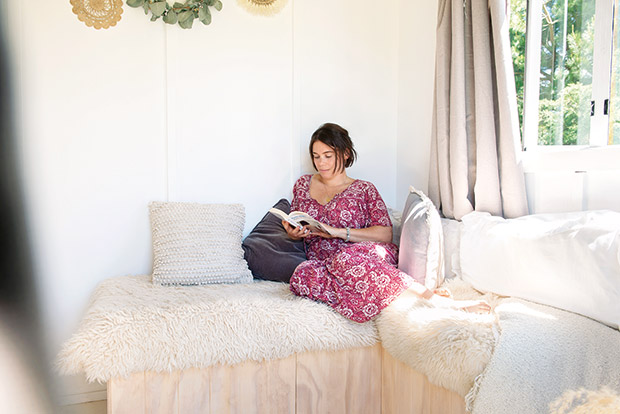 Marie’s “sunset window”, through which the best light filters.

“I was a bit worried because my sink takes up almost half of my counter space, but in a small place, it’s life-changing. I use it to do my dishes, brush my teeth, water my plants — sometimes to wash my clothes. I’ve even used it to wash a dog. It’s also super useful for crafty people like me if you want to do something like pottery or tie-dying.”

“It’s both a wonderful and challenging experience to build then live in a tiny house. There’s freedom and security in knowing that anywhere you want to go, your home goes with you.”