It started as a surfing holiday and ended as a lifestyle choice, growing vegetables and herbs south of the border, down México way.

It took Andrew Walsh, his mate and their surfboards 26 hours to make the 1770-kilometre trip from their homes in Los Angeles down the Baja Peninsula to the big swell windows where the Pacific Ocean crashes into the Sea of Cortez off Cabo San Lucas.

It was the 1980s, and logging into the net to check if the surf was as good as they’d been led to believe wasn’t yet an option. So they took the newly laid, wind-plagued, sometimes dangerous Baja Highway linking Tijuana to Cabo and headed south to see for themselves. They arrived deep in the night, just in time for last-call at the famous — perhaps infamous — El Squid Roe pub with its three floors of tabletop-dancing, tequila-swigging patrons. Andrew and Roxane, who live in Morro Bay in California, keep a beach house near Vida Farms. The property is just 10 kilometres north of Todos Santos, one of about 100 small towns recognized for their natural beauty, cultural riches, or historical relevance by the Mexican government.

It was the start of a most excellent adventure, and although Andrew didn’t know it yet, México was going to continue to play a big part in his life.

And then, of course, there was a girl. Not down there on the Mexican sand but more than 3000 metres above sea level on a mountain back in Southern California. Andrew was also an enthusiastic mountain-biker, and he was impressed to find Roxane Mancini spinning her spokes on the challenging terrain because it was a rugged ride.

Any girl that can make it up here is worth pursuing, thought Andrew, and his subsequent courtship paid off. That was more than 25 years ago, and Andrew’s world has expanded. He and Roxane now have daughters Josephine (24) and Antonia (22), he has United States citizenship, and the couple manage a highly successful organic and conventional culinary produce farm in México and a sales, marketing and distribution house in California. 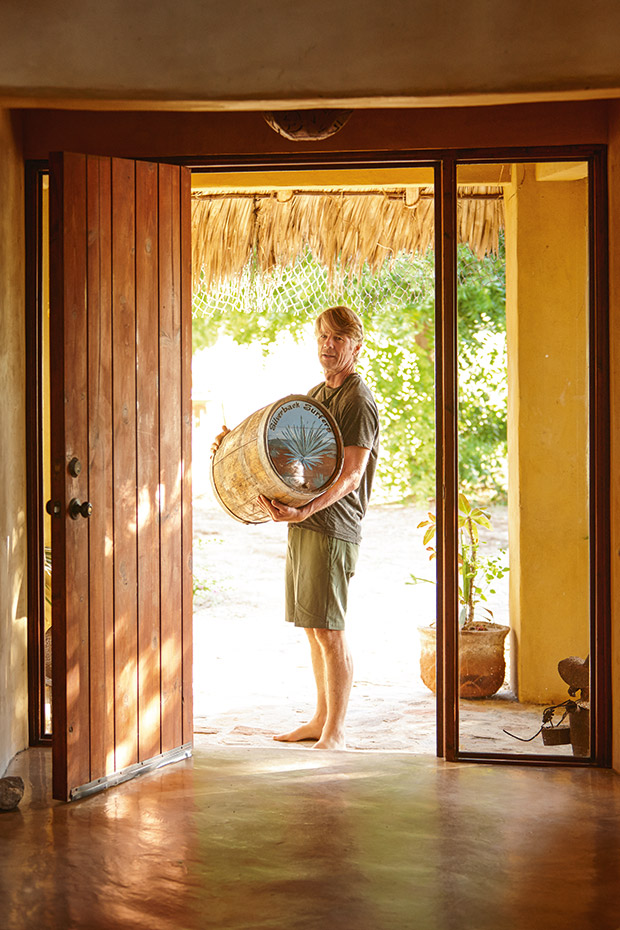 In the beginning, Andrew didn’t know a lot about farming. He originally arrived in Los Angeles as part of a team tasked with finding new products for New Zealand Gourmet (now the Gourmet Trading Company), a large kiwifruit marketer for the United States and Canada.

More stories you might like:
Take a tour of New Plymouth philanthropists Bryce and Delwyn Barnett's Lake Taupō bach

The company was losing its supply of kiwifruit and needed an alternative. Andrew and his colleagues sourced produce from Holland, Guatemala, Perú and Chile for import into the United States. So, no, Andrew didn’t know about growing, but he did know about procuring. 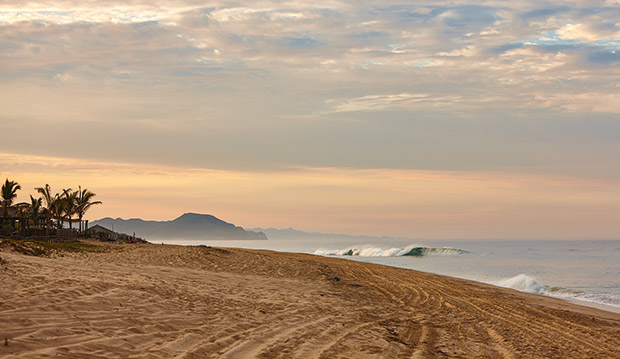 Surfing at La Pastora beach is not for novices, so its lovely stretch of sand is relatively uncrowded.

Back on that now auspicious first trip to Cabo San Lucas, Andrew met Ross Vail, an American farmer and surfer who had shifted his family to southern Baja and grew a variety of herbs and vegetables. The two became good friends, and in 1997 Andrew left Gourmet Trading and joined Ross to hone and develop the business.

“A darle que es mole de olla,” they say in México when faced with what might seem a daunting task. “Get working because this is mole de olla.” The cactus-inspired chandelier is one-of-a-kind and came with the house. It is the home’s most-photographed feature and Roxane and Andrew never tire of it.

It’s the phrase that gets everyone pulling together because it reminds them that no one gets fed without effort. It is even more apt in this case because mole de olla is a spicy and delicious soup that includes herbs such as coriander and mint, and tomatoes.

And it is herbs and tomatoes that Vida Farms is mainly known for, as well as a proprietary variety of mango that Andrew and Ross have developed over 20 years.

They had a headstart on the competition because Ross and his wife, Claudia, had the farms certified organic in 1996, the first farmers to achieve that certification in Baja California Sur. They were also the first growers in México to earn a permit to export basil to the United States. There was an excellent base to grow the business — “grow” being the operative word, really — but it was hard work, nevertheless. 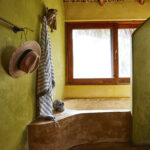 In México, calavera (skulls) represent death and rebirth. It is believed the afterlife is as important — if not more important — than life on earth. 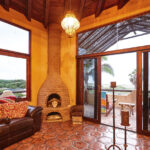 There has never been an occasion to use the fireplace, given the coldest months are still a balmy 18 degrees Celsius, so a clay face lives there instead. When the girls were little, they were told the face was the baby-sitter watching, so they had better behave. 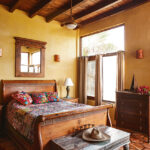 The house is decorated with items from all over México, sourced from local artists and the segundos (op-shops) of La Paz, the capital of Baja California Sur, about 80 kilometres away. 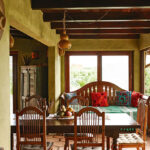 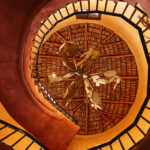 More stories you might like:
Why this Rangitikei pug lover has been rescuing unwanted pugs since the 1990s

How tough? “Extremely,” says Andrew. “Particularly farming organically. Ask any farmer that question, and the answer would be the same — worldwide. Farming is a complicated endeavour. Everything is at the will and whim of weather, bugs, trucks, border agents, food safety, money, and time. It could be a bit daunting, but it was exciting; we had nothing to lose.”

The farm — Sueño Tropical — is located where the Pacific rolls onto the land. The land rises to the peaks of the Sierra de la Laguna mountains, a UNESCO-designated biosphere reserve on the Pacific Coast side of the Baja California Peninsula. The pool belongs to the next-door property, but Andrew and Roxane are allowed to use it. Similarly, the neighbours sometimes use the Walsh/Mancini house for overflow accommodation for their boutique hotel and wedding business.

The 11 farms in their shadow benefit from a so-called “goldilocks zone”, a region that is neither too wet, or too dry, too hot or too cold, too nutrient-rich or too nutrient-poor. It is, as the original naughty little Goldilocks stated, “just right”.

“The fields are far enough south that we can grow for the North American winter market when items cannot be produced in the United States,” says Andrew. “We cross the border with 15-plus tractor-trailers of produce a week between México and the United States. Crops start their lives under net houses to control pests. The shelters are also engineered to withstand hurricanes as Baja California Sur has its share of big storms, some of which have been notable.

“Our produce is harvested daily and packed in a cooled packhouse. Controlling the temperature of fresh produce — herbs, especially — is critical. Our fresh herbs and tomatoes are temperature-controlled from harvesting, packing, trucking, and FDA border inspections.

“They arrive at our warehouse in Los Angeles and are distributed to every major city in the United States and main hubs in Canada. We move our produce very fast; products are in the customer’s hands within four days of harvest. Our goal is to give the shelf life of the products we grow to our customers, so it is a very intense, fast-moving operation.” 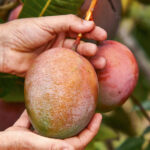 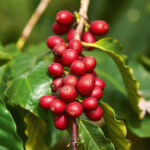 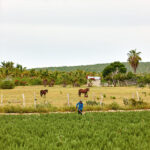 But it’s all worth it in the end, not least because there is always that surf at the end of a hard day, which drew Andrew down the coast in the first place.

The couple keeps a beach house near the farm, where they usually arrive just in time for a sunset drink on the roof deck, sipping a margarita or beer. But their primary residence is in Morro Bay in California, a gem of a place, says Andrew, very similar to a New Zealand beach town. There’s good surf and mountain-biking, agreeable weather, and the people even more so. 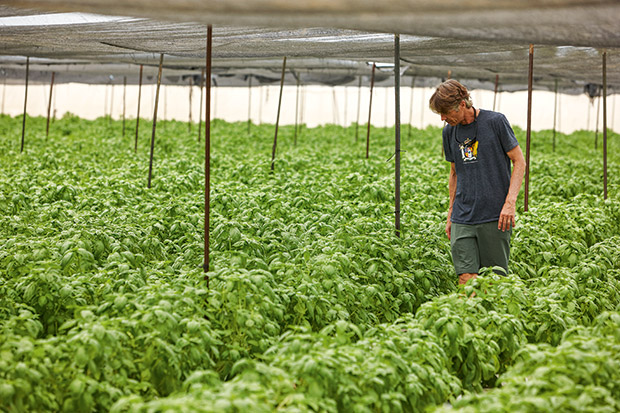 Both houses view the Pacific Ocean, and Andrew and Roxane guess that the grey or humpback whales cruising past both homes on their annual migrations north and south are the same mammals, even though the houses are nearly 2500 kilometres apart. The loyal and inter-generational workforce employed at Sueño Tropical is a huge asset to Vida Farms. Andrew and his business partner Ross support that allegiance by providing medical, childcare, social security, and housing benefits to staff and opportunities for advancement.

“Very early on, we realized our production costs were always going to be higher than larger companies, so we focused on quality, flavour and shelf life to command premium pricing from our customers. To this day, we can say with pride that we produce the best-quality organic beefsteak tomatoes and fresh culinary herbs available in the United States market for the September–July season.”

At the time of writing, Andrew and Roxane were in MIQ in Auckland. In a way, this could be construed as good, because the rules concerning Covid-19 means their regular visit to New Zealand will be at least three months this time or — as Andrew puts it — until the surf runs out.

Their regular visit is for a month or so, especially to catch up with Josephine, who went to university in New Zealand and then set up a fitness business in Hamilton. The pandemic greatly affected Vida Farms. “With our conventional produce going to food service, and with the shutdown in the United States lasting a year, we have lost a lot of that business,” says Andrew.

“Fortunately, we increased our organic production when we saw the early effects of Covid-19 on the market. We have a diverse customer base, so we could increase sales to existing customers to buffer the demand changes.

“The silver lining is that folks have been cooking and eating at home, so our retail business has remained strong.”