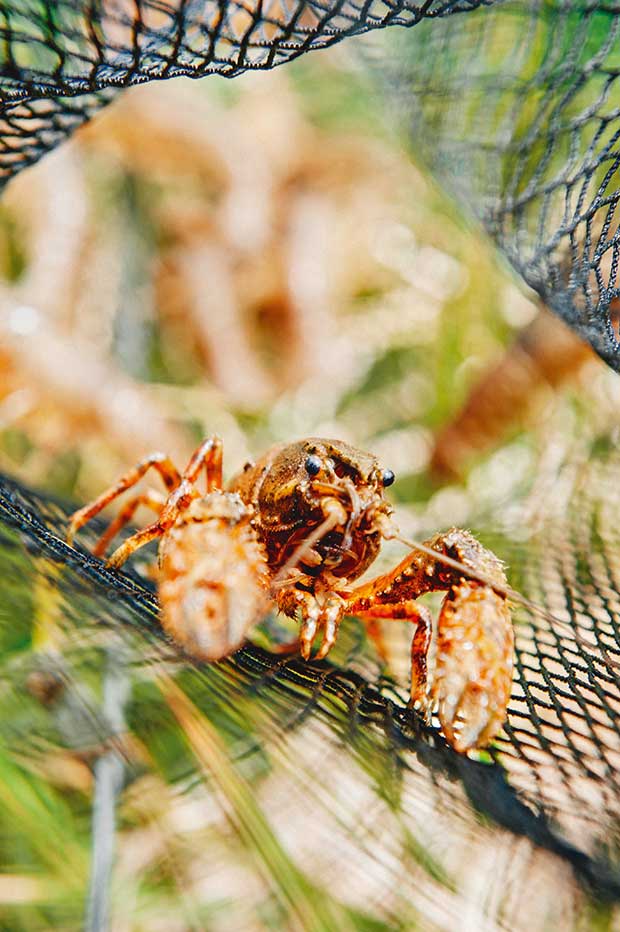 The world wants our freshwater crayfish. Now there’s a practical guide on how you can farm them and get a bite of the juicy price tag.

Not so long ago, when no-one doubted the drinkability of our rivers and streams, when no-one used words like ‘swimmable’ to measure water quality, one of the defining pastimes of a New Zealand childhood was searching for freshwater crayfish. Lifting up rocks and prodding the banks of streams to chase kōura (or crawlies) out of their hiding places was endlessly entertaining, and ultimately rewarding if you wanted a feed.

There were lots of kōura back then. They thrived in forest streams, in lakes and farm ponds, even in streams that flowed through city parks.

But not any more. Kōura are in decline. The blame lies squarely with our failure to care for their habitat. No-one knows more about this than John Hollows. He is a scientist and conservationist who has studied the impact of changing land use on our native crayfish. His conclusion?

“Kōura are on a hiding to nothing.”

The solution: farm them. John believes the global demand for freshwater crayfish can support a profitable niche industry and this will save the species. For the past few years, he’s been developing a unique way of farming kōura in the forests of Southland and Otago. Everything he knows is in a recently-released, how-to guide that he hopes will encourage more people to do so. Freshwater Crayfish Farming: A Guide to Getting Started draws on his experience as aquaculture manager for the Keewai project. This is a business initiated by forestry company Ernslaw One to gain additional revenue from the hundreds of fire ponds in its forests. Normally, they are only used in the event of a fire.

But now, the ponds are steadily being stocked with kōura (brand named Keewai) for the high-end restaurant market. The business is commercially savvy, using existing infrastructure, but also award-winning. It won the Spirit of New Zealand Award in the Outstanding NZ Food Producer Awards 2017, for its sustainable approach and conservation ideals.

Some 500 ponds are now in varying degrees of readiness. Stocking a pond takes time, which means it will be years before the company can guarantee a steady supply, let alone make a profit. Last year John harvested just 250kg for sale. That’s about half the estimated total national production from the country’s four active farms. It’s well short of the 10-tonne minimum needed to attract an overseas market. 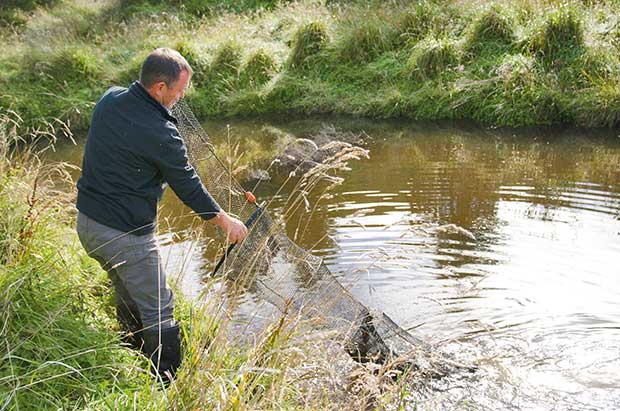 John’s booklet, backed by the Sustainable Farming Fund, is the first attempt to collate what is known about crayfish farming in New Zealand. It’s aimed at everyone: large landowners, farm foresters, small farmers, and lifestyle block owners who want to stock a stream, irrigation canal or garden pond with a native species in need of protection. He’s written it so people can avoid the years of trial and error experienced by the small group of pioneers who set up their own crayfish farms without guidance.

“We’re starting an industry with a blank sheet,” says John. “There is no blueprint so it’s challenging. There’s a lot of misinformation out there. This (book) is a document a lay-person can understand. In a couple of years, I’d like to think we can edit it.” John emptying a fyke net to check on the crayfish; a South Island crayfish ready for sale will weigh about 70-100g.

The information draws on the methods used by farms in Marlborough, Kaikōura and Alexandra. These are all smaller in scale than Keewai, and semi-intensive in the use of supplementary feed and mechanical aeration of water in ponds and water races. But mostly, the guidelines are shaped by John’s own experience, honed from years of research in the laboratory and many hours in a wetsuit observing kōura in their natural habitat.

The Keewai farming system is adapted to New Zealand conditions and is unique in its hands-off approach. Other countries have more intensive systems. In Australia, yabbies and the larger marrons are farmed in dams that are drained once a year. The French écrevisse are harvested from ponds in a similar way. In China and the Southern states of America, crayfish are farmed in rice paddies. Newly-fertilised eggs on the belly of a female.

THE BASICS OF FARMING CRAYFISH

The Keewai system relies on modifying existing fire ponds, or digging new ones, to replicate the kōura’s environment. Riparian edges are planted with native grasses and watercress, which provide both foliage and insects for the kōura to feed on.

New ponds are filled naturally with spring or rainwater and then left for two years. By the time the kōura are introduced, each pond has developed its own ecosystem, filled with everything crayfish like to eat.

Nothing is introduced. The kōura eat everything from plankton to plants, snails, and water boatmen, but they are not at the top of the food chain.

“Eels, trout, water rats, perch, even hedgehogs. Anything you can think of will have a crack at crayfish,” says John. “They’re such a lovely thing to eat.”

To protect them, large branches of twiggy trees like coprosma are dropped into the middle of each pond. These act as natural refuges to save the kōura from harm, particularly when they moult. As a kōura grows, it sheds its outer skeleton, leaving a softer skeleton underneath that needs time to harden. During this time, they are more vulnerable to attack by predators.

The branches also give them a climbing platform from which they can gorge on the plankton that blooms on the surface water in summer. 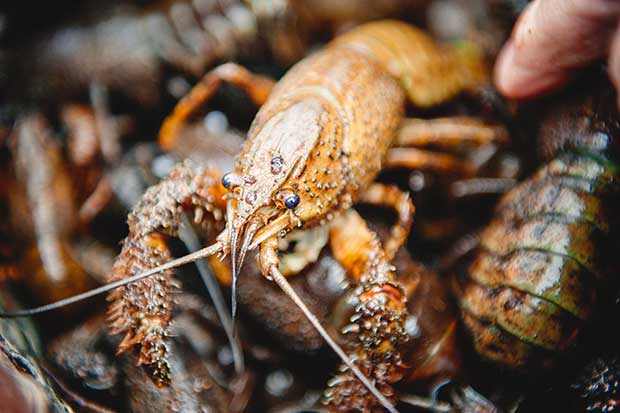 Crayfish shed their exo-skeleton as they grow and breed.

3 REASONS IT’S A GREAT IDEA
• this is an easy form of land-based aquaculture, sustainable, and cheap to run, with returns of $100 per kilogram of crayfish.
• there are no feed costs
• labour is minimal for most of the year 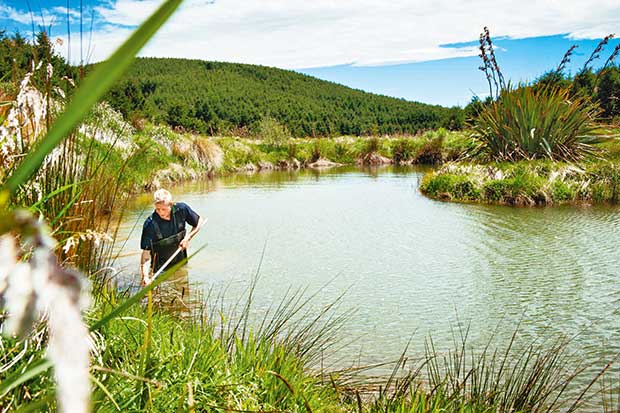 John and his colleagues spend hours finding, checking and measuring their stock.

Labour becomes quite intensive during the short harvest season between February and April. At Keewai, forestry workers lend a hand to set baited nets. There’s no way to drain the fire ponds so the harvest is completed with hand-held scoop nets.

The catch is sorted and the kōura are either thrown back, transported to new ponds for breeding, or taken to a purging facility before being shipped out live in chilled boxes.

The system is low yield because:
• it takes a great many ponds to grow a sizeable population;
• left to their own resources and with no extra feed, only five percent of eggs make it to their second year;
• in these conditions it takes three years to raise a juvenile South Island kōura to a saleable weight of 70g-100g – the North Island species, which also occurs in the north and west of the South Island, is generally smaller and sold at around 50g;
• more intensive systems raise denser populations with faster growth and better yields, but at a higher cost. 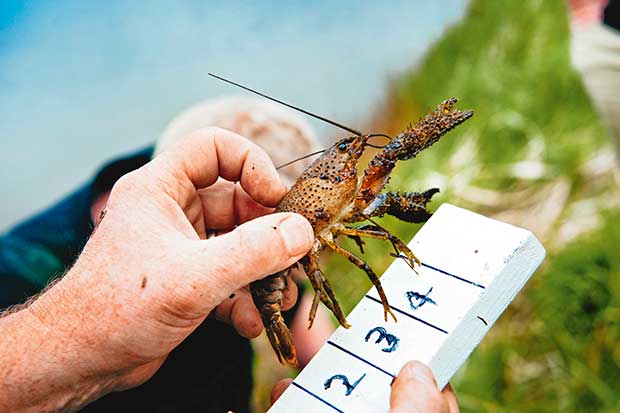 Water is the main consideration. Habitats can be created or modified from new or existing ponds, dams, streams or canals but they need to be clear of sediment. The water source – spring, stream or rain – must be clean. Kōura is extremely sensitive to water quality and will only live in pristine conditions.

“Herbicides and pesticides will kill within hours,” says John. “Keep spraying well away from the water and riparian areas.”

Then there are pests and diseases. New Zealand has a market advantage as it is free from the crayfish plague which has devastated stocks in other countries.

There are one or two other lesser diseases to look out for, chiefly the whitetail fungus. To limit predation by eels and perch, stream-fed ponds should be fenced or fitted with traps. Prospective farmers will also need to source seed stock, dig ponds, set up purging facilities, and maybe hatcheries.

All these activities require consents and permits from government agencies, territorial authorities or other groups. John warns it pays to do the homework before embarking on a commercial venture. 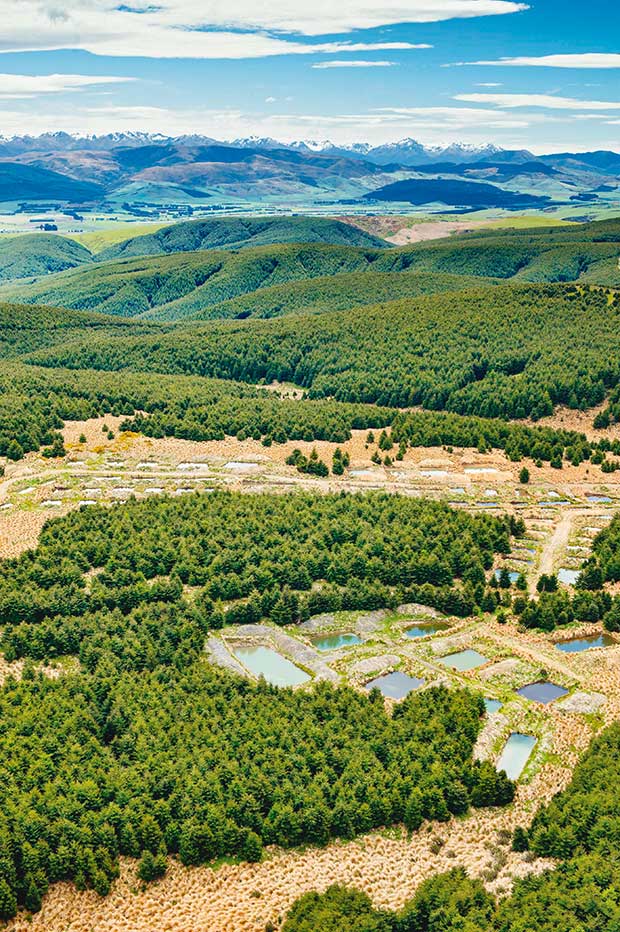 Some of the thousands of ponds John hopes to eventually populate with crayfish within the Ernslaw One forests.

THE FUTURE OF CRAYFISH FARMING

Several parties are already on track. John is working with iwi in Hawke’s Bay and Southland, but he also has small landowners in his sights. He says the beauty of kōura farming is that it doesn’t affect the water source. It can co-exist with other farming activities, adding an additional income stream for vineyards and lifestyle blocks. Where income is not an incentive, he offers breeding stock for stream restoration projects.

He’s also advocating the formation of an industry association to share knowledge and experience, and to promote ongoing research in the following areas:
• selective breeding for faster growth;
• artificial rearing of eggs for higher survival percentage;
• research into the benefits of feeding, eg conversion rates, cost-benefit, and taste profile.

John believes the best way to ensure the survival of a species is to farm it. He says anyone with a garden stream or pond could raise kōura for fun. Children love searching the banks for the nippy little beasts and it’s a great way for them to learn about conservation and their natural environment.

You can read and download Freshwater Crayfish Farming – A Guide to Getting Started here. 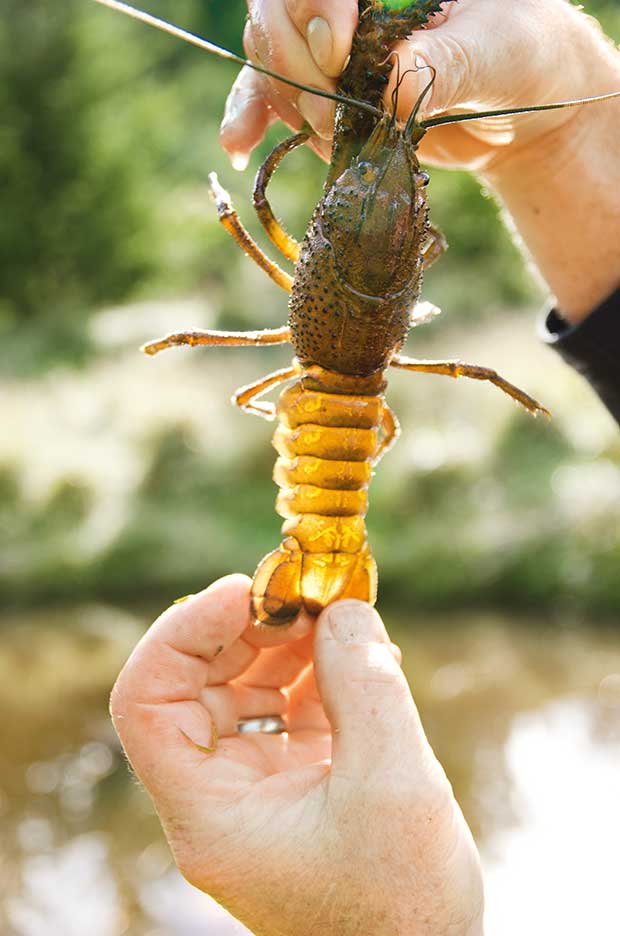 • Kōura are a traditional food for Maori, who have several ways of catching them in the wild. One method is to tie up a large bundle of bracken and leave it on a pond bed attached to a rope. The crayfish climb between the branches and use it as a refuge, effectively trapping themselves. This method of harvesting is still used in the Rotorua Lakes area.
• Both North and South Island kōura are in decline, with the South Island species formally listed as threatened. Despite this, neither species is protected and people can take up to 50 per person per day. However, there are areas where iwi control fishing so it pays to ask. Crayfish from Taupo and the Rotorua Lakes can only be taken by Maori.
• Kōura are night feeders. Try catching them by baiting a stocking with a piece of meat. Lower it into the water and wait. Their claws get caught in the stocking which makes them easy to haul out.
• After years of working with kōura, John likes them too much to eat them himself. But if you do, he says purge them for a couple of days in several changes of fresh water (not tap water) before cooking. Chill them in the freezer for an hour or two until they stop moving, then drop them into boiling water and cook for about 1 minute until they turn red. Alternatively, chill, then spike them in the head and halve them lengthwise. Barbecue while basting with oil or melted butter. Finish with a little salt and a squeeze of lemon or drops of balsamic vinegar.
• The tail has the most meat, followed by the claws. The rest can be used to make a flavoursome stock or bisque.

THE KōURA FARMS OF NZ