Late winter and early spring are difficult times for vegetable growing, but these two nutrient-filled greens love it.

You may think you don’t have corn salad or miner’s lettuce in your garden, but these two hardy plants grow like weeds and often pop up, whether you planted them or not.

If you have miner’s lettuce in your garden, you probably pull it out thinking it’s a weed. That’s what I did.

As daylight hours get shorter in autumn, the dormant seeds pop up. Miner’s lettuce grows prolifically, densely, even finding its way into cracks in concrete. 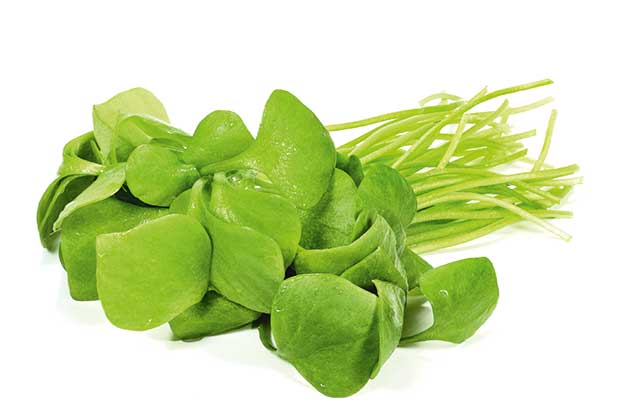 It’s a bit weedy, but very easily pulled out and isn’t a problem over summer. It simply disappears when it’s too hot and bright.

But the thick, succulent, lemon-lime leaves on this spreading ‘weed’ are a reliable source of salad greens when most other greens are scarce and many have stopped growing.

Pick the tender stems and leaves as you would a bunch of violets. The taste is crisp and juicy, with a hint of lemon. It’s so mild in flavour that children will eat it. Chickens like it too.

The leaves are rich in vitamin A, vitamin C and anti-oxidants. They also contain manganese, potassium, iron, copper and calcium. Seeds are rich in omega-3 fatty acids.

The leaves can be useful as a base for raw winter salads, or can be chopped up with the stalks, steamed and served with butter, pepper and salt. The small white flowers are also edible.

As the days lengthen, miner’s lettuce will form brown capsules which then burst, scattering its long-lived seeds. Just a few plants left to seed will ensure it pops up again next year, lying dormant until late summer when the cycle starts again.

It is worth finding a place in the garden where miner’s lettuce thrives so you can harvest this useful winter-into-spring green.

It can be established in pots, in the greenhouse or anywhere moist and shady. It will form a lush groundcover producing plenty of leaves, just when you need them.

HOW TO RECOGNISE MINER’S LEAF

The rounded, fleshy leaves are on long stalks. Two leaves are connected around the stem but appear as one circular leaf. 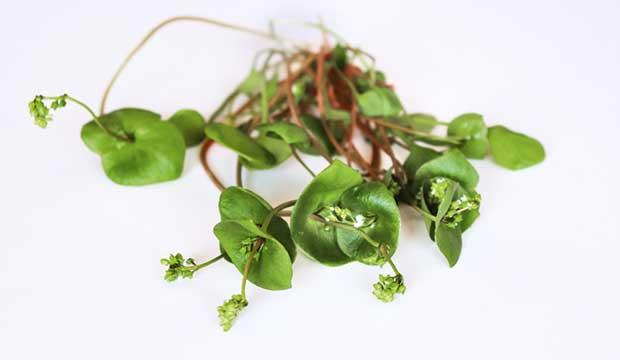 The flowers grow immediately above the centre of the circular leaf. These are quite small and usually white, sometimes pink. They may be solitary or in clusters.

WHY YOU SHOULD EAT IT

Californian gold miners recognised this plant had high levels of vitamin C. They ate it to stave off scurvy, which is how it got its name. 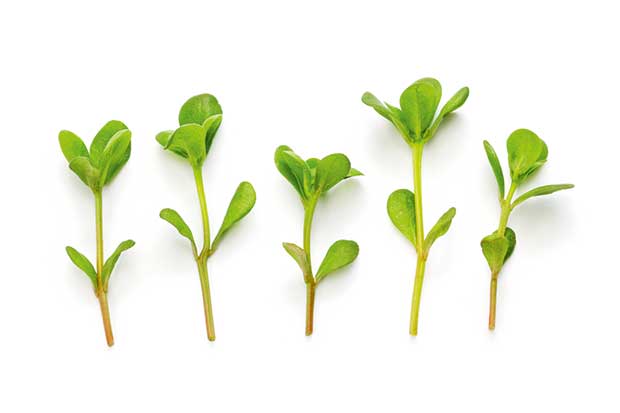 It can be taken as a spring tonic and the soothing mucilaginous properties may help regulate the bowel.

HOW TO USE IT IN YOUR COOKING 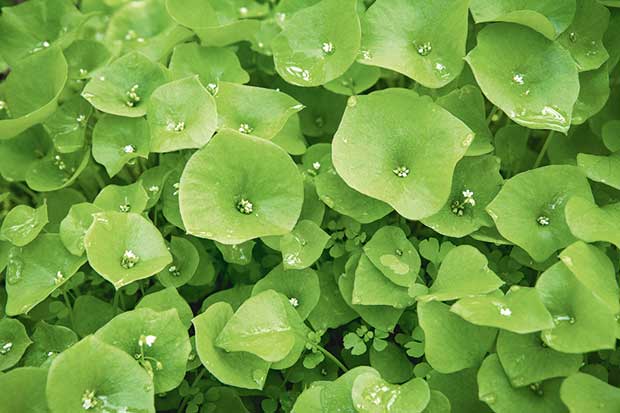 If temperatures get too hot when it’s growing, older leaves can be bitter to taste.

Young leaves can be tossed into flans, omelettes, pies, soups and sauces or added to sandwiches and vegetable rolls. They can also be lightly stir-fried with garlic and butter. 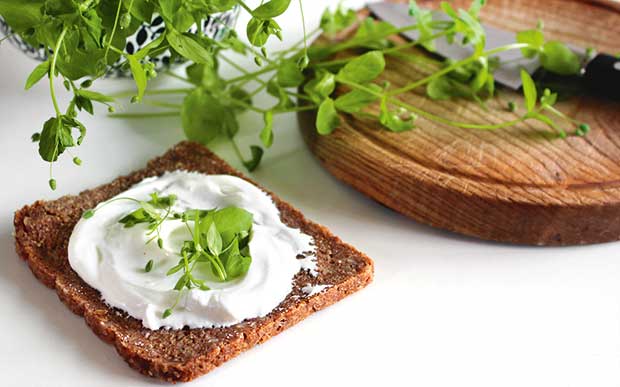 Miner’s lettuce can contain oxalates. It should not be eaten by anyone who may have or who is at risk of gout, kidney stones or rheumatism. 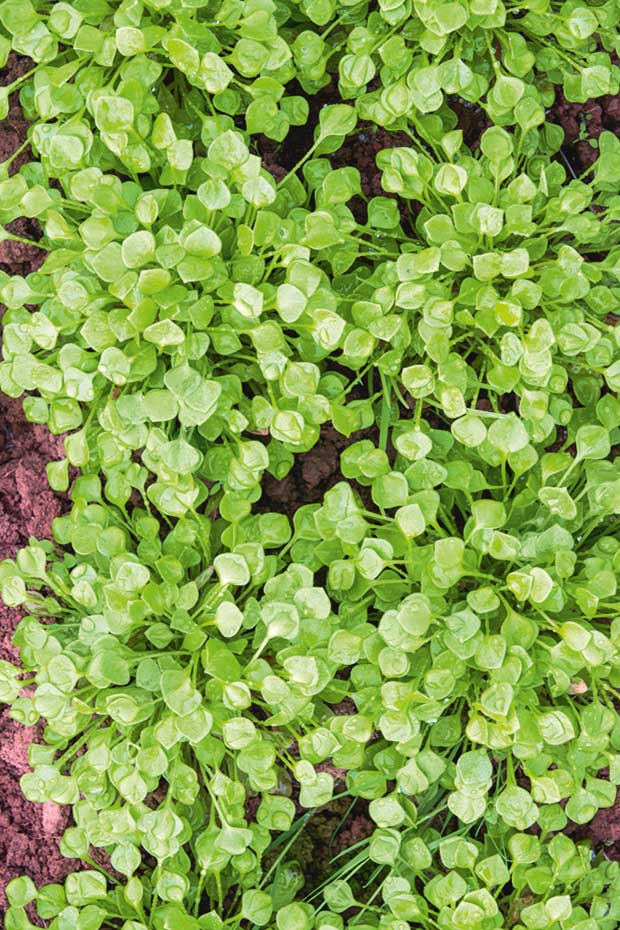 • Miner’s lettuce will grow in sun, light or heavy shade. However, for the best quality leaves, plant in a cool, damp, semi-shade area.
• It prefers a light, sandy soil with enough organic matter to retain moisture.
• Sow in spring or autumn when seeds will usually germinate rapidly. The tiny black seeds should be barely covered.
• It will quickly grow to 30-40cm in the dappled shade of trees.
• If too hot the older leaves can turn a deep red colour and taste bitter.
• Although it is frost-hardy, in colder areas it is best grown in an unheated greenhouse or under cloches.

In its native homelands, corn salad is often found on thin soils around rocky outcrops, scree, sand dunes, and coastal shingle. It grows wild in disturbed ground and is sometimes a weed in grain fields.

More stories you might like:
5 native plants to forage in New Zealand (and how to benefit from them) 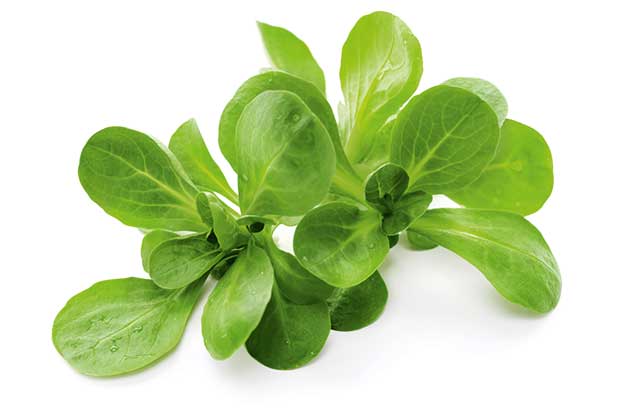 It rose in my estimation when I found it poking perkily out of the snow after a spring cold snap. I shook off the snow and transferred the lush, fresh leaves straight into the salad bowl.

It is the most indestructible of greens, surviving snow, hail, and frost, and temperatures down to -15°C. You can pick the spoon-shaped leaves rimmed with frost and they’ll keep for up to two weeks in the fridge.

The leaves have a velvety texture. Surprisingly, in spite of its hardiness,the flavour is mild, delicate, nutty, with
an almost melt-in-your-mouth quality.

Some people describe it as tasting of primrose and rose petals. The plant forms a loose and wavy, low-growing rosette (5-20cm high) of six to eight leaves on thin stems.

They are fiddly to pick but worth the effort for their taste, high nutritional value, and phytonutrient levels. Corn salad contains substantial amounts of B-vitamins, vitamin C, iron, folic acid, potassium, and omega-3 fatty acids.

HOW CORN SALAD GOT ITS NAME

Corn salad was the main winter salad green for centuries before the development of modern winter lettuce varieties. That long tradition saw it take on different names. ‘Corn salad’ was from its habit of growing between rows of winter wheat (which in Europe is referred to as ‘corn’). 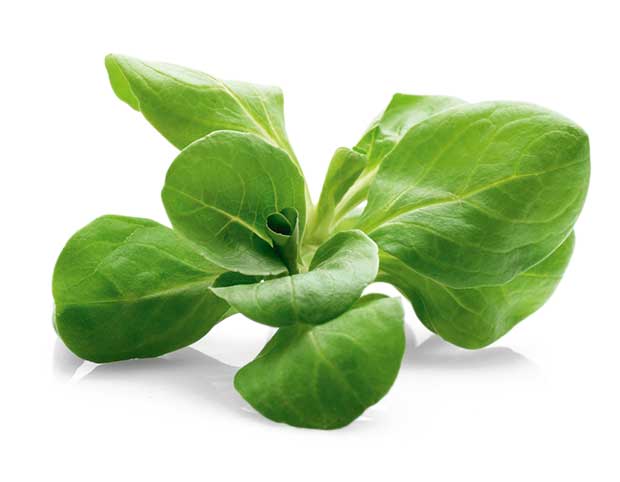 ‘Lamb’s lettuce’ is because it appears in the lambing season, and the rounded spoon-shaped leaves resemble a lamb’s tongue.

In France, it was known as ‘doucette’ or ‘little soft one’ due to the velvety leaves.

WHY YOU SHOULD EAT IT

Corn salad has been regarded as a winter and spring ‘tonic’ thanks to its high vitamin, folic acid, and beta-carotene content. It contains 14 times as much pro-vitamin A as iceberg lettuce. 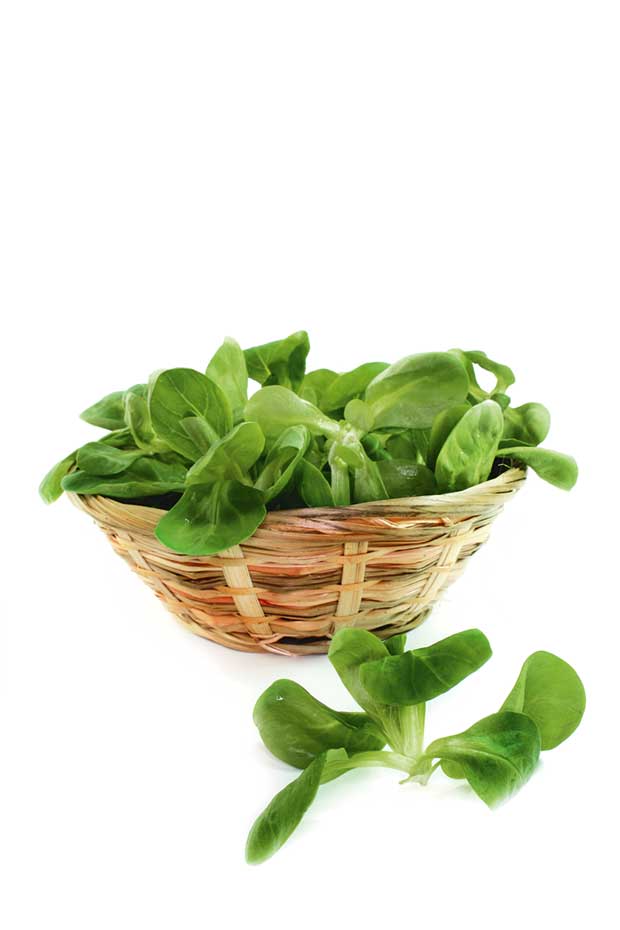 HOW TO USE IT IN YOUR COOKING

Wash the leaves to remove dirt splashes. Remove excess water in a salad spinner, or by patting gently with paper towels. Oil in vinaigrette reduces the crispness of leaves, so reduce the proportion of oil to vinegar. The sharper taste will also enhance their mild flavour. 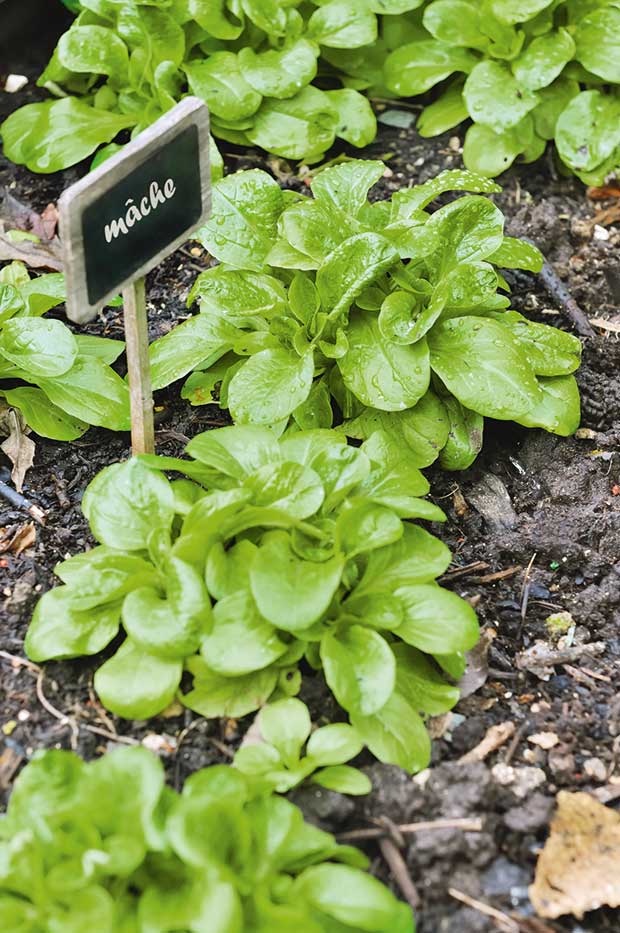 Corn salad contains 14 times as much pro-vitamin A as iceberg lettuce.

• Corn salad is a cold-weather crop, best grown in autumn, winter, and spring. In hot weather, plants grow much more slowly and are more susceptible to mildew and bolting. Above 17°C, seeds will go dormant.
• Sow outside in autumn for winter and early spring crops, and again in early spring in greenhouse beds, or in containers for transplanting out for early spring pickings.
• Corn salad prefers an open, sunny site in a deep, rich, fertile soil for continuous growth, although it tolerates most soils and wet and dry conditions.
• Plants can be grown as cut-and-come-again seedlings or as single plants. Sow for single plants in well-watered drills, 1cm deep in rows 20-30cm apart and thin progressively to 10cm apart. Plants can also be grown in 25cm pots.
• Leaves can be picked as required (be careful not to remove too many at once) or lift whole plants when mature, about 3 months after sowing.
• There are two varieties available in New Zealand. Verte de Cambrai is hardier for winter harvesting and is found in some garden centres in autumn. Dutch Large Seeded has more upright growth and slightly larger leaves. 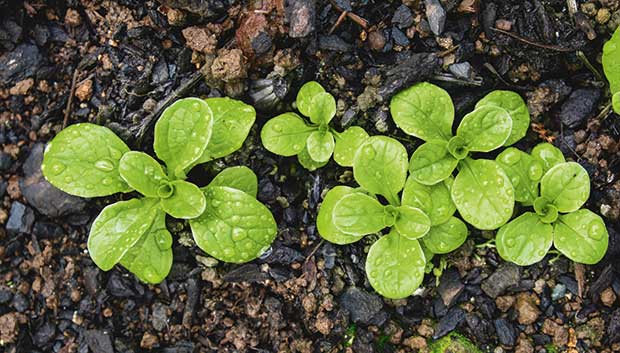 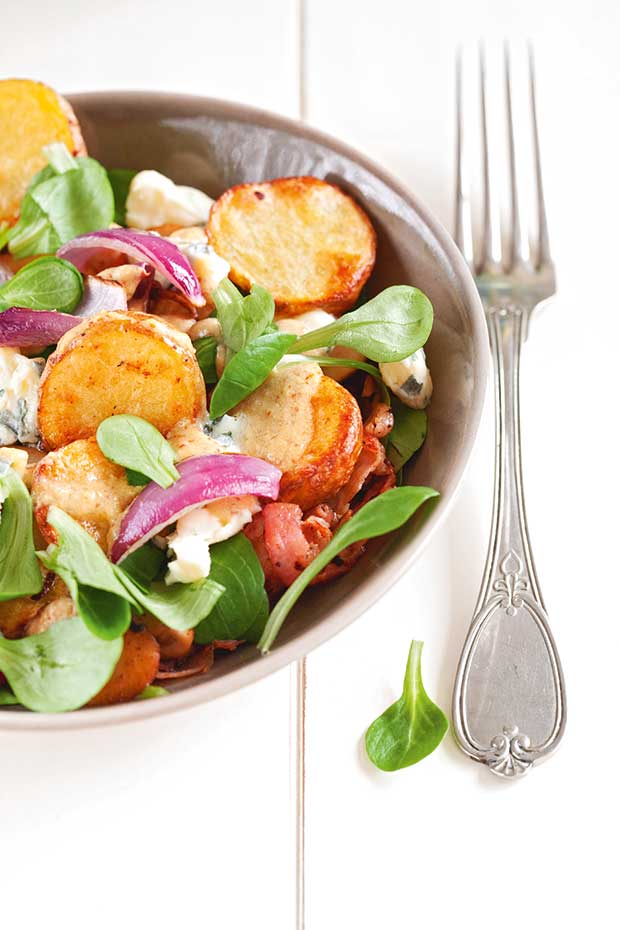 This recipe is adapted from The Cook’s Salad Garden Revisited by Mary Browne, Helen Leach and Nancy Tichborne. You can substitute half the corn salad for young lettuce leaves.

Chop the chervil and mix into the pears. Cube the cheese to approximately the same size as the pear cubes. Arrange the corn salad leaves on a plate or shallow bowl.

Drizzle the remaining lemon juice over the salad then give it a good grind of black pepper and salt.