12 impressive trees to consider for your lifestyle block 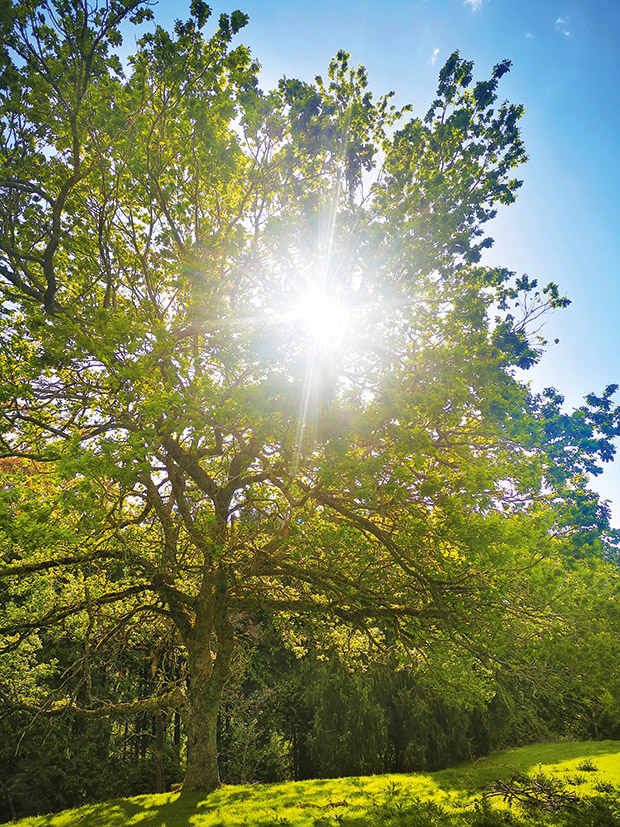 Here are 12 trees you should plant in your paddocks, simply because they’re beautiful.

It must be a fantastic feeling to stand under a majestic, 30m-tall dawn redwood that you grew from a cutting. To shelter under a mighty oak that was once an acorn in your pocket.

Peter can do both. He spent 70 years on his Otorohanga farm, planting forestry blocks for timber and landscape trees for beauty. Now 94, he’s sold the farm, but his son Robb owns the land around the family farmhouse, home to many of Peter’s magnificent trees.

It’s a rare, almost inconceivable opportunity to plant a grand, sprawling tree, then wait 30 years or more for it to reach full size. It’s a joy to tour an arboretum of spectacular trees, guided by the farmer who grew them. 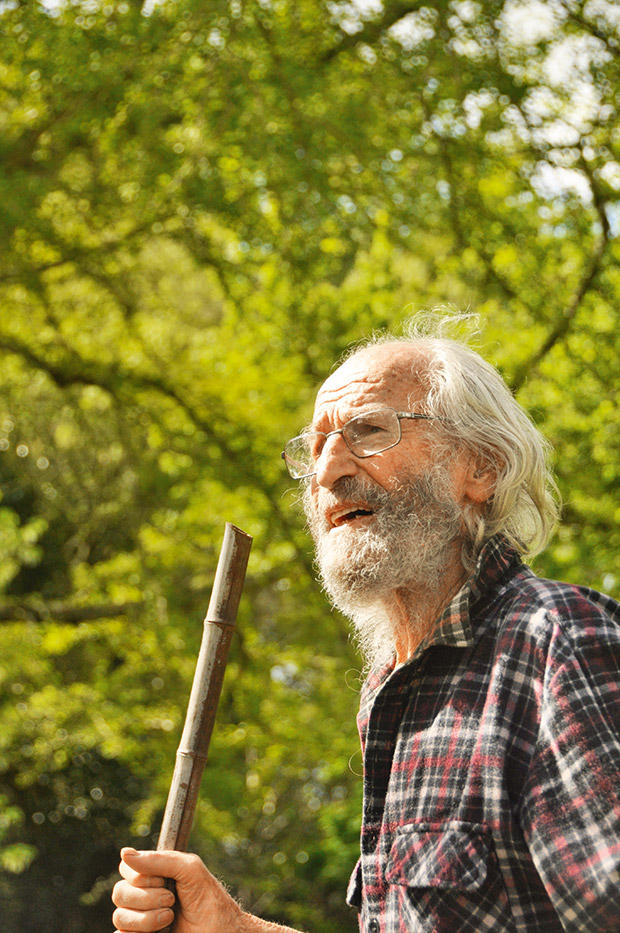 Peter is well known for his contribution to the NZ tree community. He helped plan and plant Brook Park arboretum in Te Kuiti. He’s been a committee member of the Waikato Tree Crops Association since its establishment in 1976, and an active member of the Farm Forestry Association. He still goes to field days, gifting trees or teaching grafting and propagation.

Trees, Peter explains – even grand statement trees – don’t live in isolation. Together, they create a vista. There’s the contrast of the yellow feathery spring growth of a honey locust against the dense hedge of red cedar. The startling red of a copper beach glittering above the smooth green of a magnolia. It’s a palette for the eye.

But there’s also an emotional side to it, says Peter. Every tree soothes the soul. Every tree should be appreciated for itself, for its aesthetics, and its calming effect on the human psyche.

I’ve written previous columns about good trees for firewood and ones suitable for stock. My question for Peter was, if he wanted to plant some impressive paddock trees on a block, where there might only be room for one or two, what would he recommend?

12 trees recommended by an expert

If anyone knows the good and bad points of trees, it’s Peter. But ask him to choose, and he says it’s like asking which is your favourite child. They all have their good attributes, their seasons, their time to shine, and some have drawbacks.

His advice is to think about what you appreciate most:
• flowers in spring?
• summer leaves?
• autumn colour?
• gnarly trunks and bare branches
in winter?

There’s no perfect tree, but Peter came up with 12 that he’s enjoyed over the years. They flourish in Otorohanga (50km south of Hamilton), and suit most North Island climates. However, always check a tree’s suitability for your region before planting anything. A hardy tree that withstands wind, prefers full sun, and tolerates soils with poor fertility. It has a medium growth rate, eventually forming a compact dome shape. Its main feature is its rich claret-red foliage in autumn. The winged seeds, called keys, ripen over summer and can be pickled and eaten. The timber is prized for handles and firewood.

This is a slow-growing tree that needs shelter from strong winds and does best in deep, fertile soils. However, ginkgo is one of the most resilient trees, enduring since the time of the dinosaurs and surviving the atomic bomb dropped on Hiroshima. The fan-like leaves turn a bright golden yellow in autumn. Female trees are preferred in China as the fruit is edible. In NZ, males trees are often preferred over females, as the fruit has a very unpleasant odour when it rots.

Aka: Metasequoia glyptostroboides
Features: up to 30m tall, 8m wide, conical shape, one of the few deciduous conifers 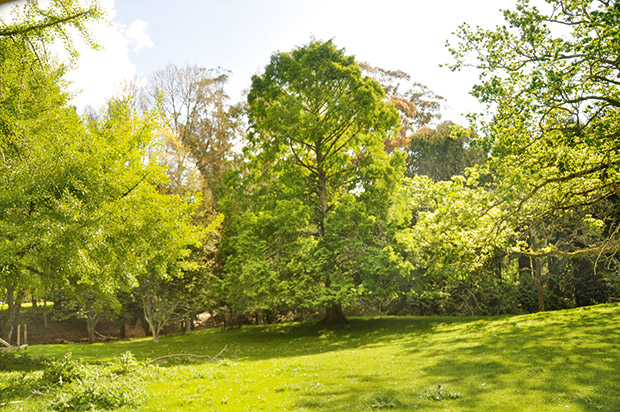 Needs shelter and grows rapidly in moist, fertile soil and even standing water. Has feathery, rich-green foliage that turns pink, gold, and reddish-brown in autumn. Named because its ancestry goes back to the dawn of time. The largest example in NZ is a majestic 32m and grows at Tupare Park in New Plymouth. Quick growing in moist, well-drained, fertile soil but will tolerate clay and some drought. Similar to the Caucasian wingnut (but better, in Peter’s opinion). Has half-metre long pendulous strings (called racemes) of light-green flowers in spring. These develop into eye-catching chains of small nuts, which change from green to brown and (of course) have ‘wings’ attached. Yellowy-green leaves in autumn. New foliage in spring is covered in down.

Aka: Juglans regia
Features: up to 15m, spreading crown up to 10m, deciduous 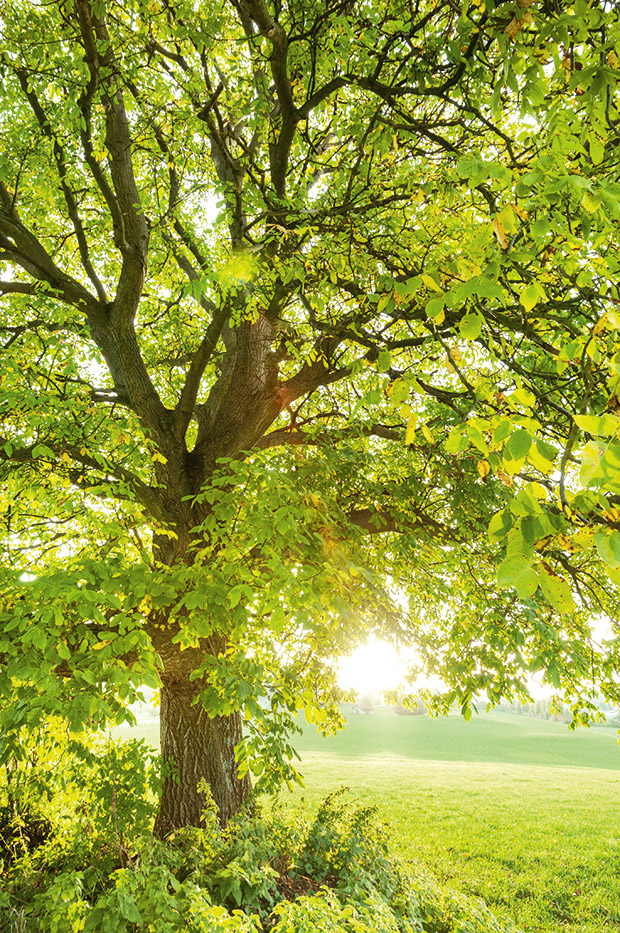 Everyone should plant a walnut tree, in Peter’s opinion. It’s a lovely spreading tree that provides lots of shelter and produces a bountiful crop. The ‘Juglans effect’ – where the roots apparently kill off the undergrowth – doesn’t affect pasture in NZ. Seedling trees are more robust but take longer to produce the male catkins (10+ years plus), so you don’t get fruit until then unless there’s another walnut upwind. 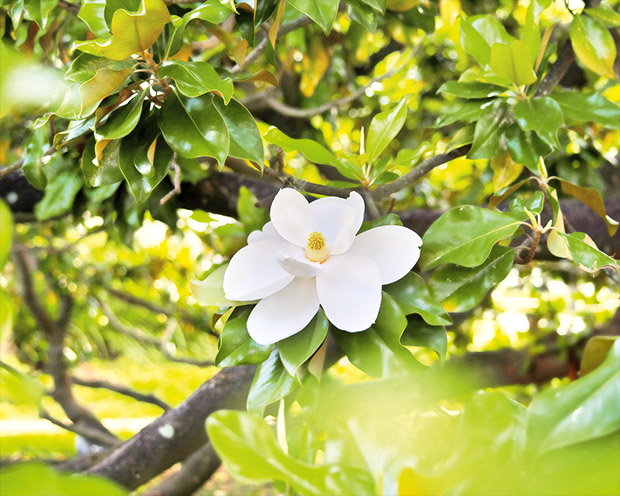 Peter has an extensive collection of magnolia varieties as he enjoys their showy perfumed flowers. The most well-known evergreen is Magnolia grandiflora (pictured above), a compact, dome-shaped tree that’s remarkably tolerant of harsh weather.  However, Peter says its shade is too dense for a paddock tree, and there are other big tree magnolias he considers do a better job, providing shade but also allowing good pasture growth, including: Prefers part shade, is hardy to the cold but doesn’t like wet soils. Has multiple trunks with a textured bark of cinnamon, pink, and yellow, similar to the patterns on a plane tree. In late winter, it puts on a show with deep red flowers on the bare stems. Peter says it’s one of his favourites, for its lush foliage, which transforms from greens and yellows to fiery oranges and reds. 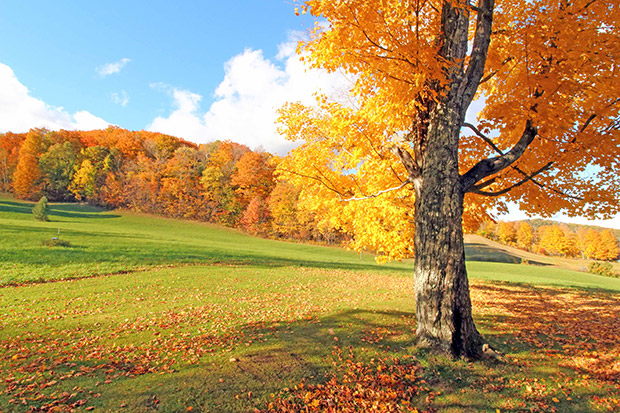 Slow to establish. Prefers moist but well-drained fertile soils. It has stunning, bright yellow-green flowers in spring that are an excellent source of bee food. These then develop into winged fruits, which fall in autumn.

Trees in a sunny position that also get autumn chill produce the most spectacular yellow, orange, scarlet, and crimson colours, which vary from tree to tree. The hardwood timber is prized for furniture.

Aka: Nyssa spp
Features: 20m high, pyramid shape when young, then spreading out to 4m, deciduous Peter has several Nyssa and says they’re all favourites, especially Nyssa sylvatica (pictured, above) and Nyssa chinensis. They have the best autumn colour, lasting on the tree for weeks. The tiny (really tiny) pale blue flowers are a good source of food for bees, and birds love the shiny black seeds.

The wood is very tough and resistant to wear. Twigs were traditionally used as toothbrushes – chew one end to make a brush and use the other as a toothpick. 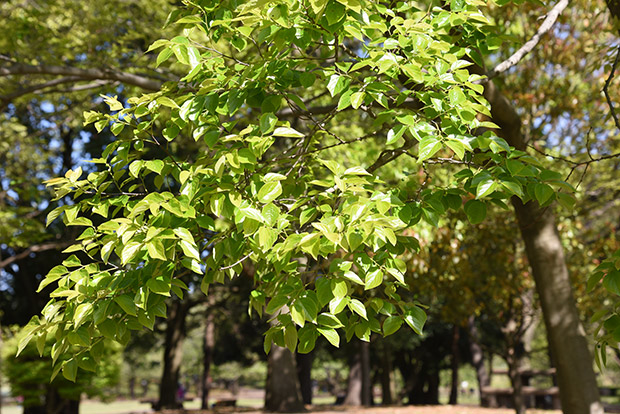 Peter was entranced by avenues of hackberries he saw in Italy and Hungary, and the trees have grown well for him in Otorohanga. It’s sometimes called the sugarberry as it has small fruits that turn orange-red to dark purple in autumn and hang on the tree during winter, or until the birds (or you) eat them. Young trees have distinctive fissures in the bark, and the pale green foliage turns a light yellow in autumn.

Aka: Quercus spp
Features: up to 30m high, spreading to 20m wide, deciduous or evergreen depending on species 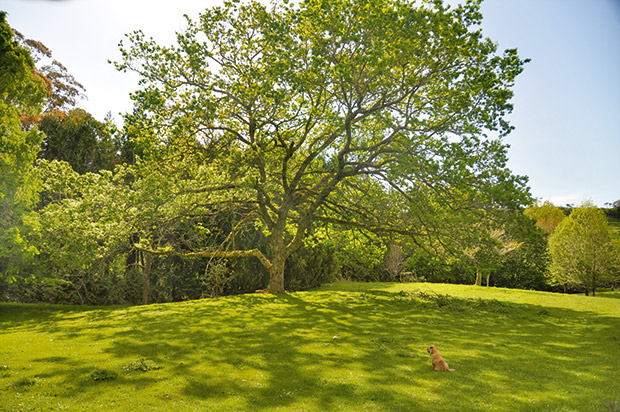 There are more than 500 species of oaks, and their robustness, versatility, and beauty have made them popular with farmers for centuries. They can withstand strong winds and are tolerant of a wide range of conditions, including swampy soils. The acorns are a valued source of stock food, although green ones can be toxic. The leaves are good stock fodder, and the timber is highly prized. 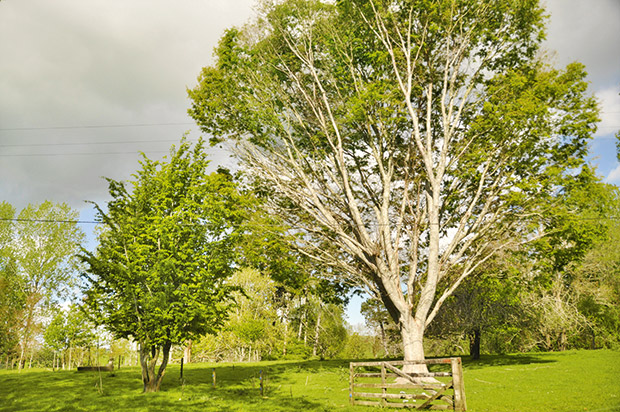 WHERE TO GROW A TREE IF YOU THINK YOU’LL MOVE

If you want to plant majestic trees, but suspect you’ll move on before they’re grown, put them in a spot that’s easy to see from a public road.

I love encouraging children to take ‘ownership’ of a majestic tree. Get them to help plant it, and take a photo beside the little stick. It may not mean a lot to them when they’re small, but it can be thrilling for them to go back as an adult.

WHY YOU NEED OTHER TREES FOR LIVESTOCK

A number of spreading trees can provide excellent shelter for your stock from cold, wet weather, but a single spreading tree isn’t the best choice.

Stock like shade from the sun and shelter from the cold. If they spend a large part of the year camping (and defecating) under one tree, nutrients are concentrated into one small area.

The condensed volume of traffic also turns the grass under the tree into mud. This can result in an accumulation of bacteria in the ground, which can be detrimental to newborn stock and cause health issues such as footrot.

• Plant tall, narrow trees such as the Lombardy poplar or the upright English oak Quercus robera Fastigiata. Their shadows, and the stock, will move with the sun, or;
• create a ‘loose canopy’ using several trees scattered throughout the paddock. Space them far enough apart to let sunshine hit the grass, but close enough to provide an ‘umbrella’ of shelter.

WHY DO SOME TREES TURN BRILLIANT COLOURS IN AUTUMN?

A change in leaf colour is triggered by cold weather in autumn. The basics are plants stop producing chlorophyll (which is green), breaking down and using up the remaining chlorophyll in its leaves. This exposes the underlying pigments of yellow and red.
However, it’s a complex subject. Check out the fascinating read on research into autumn leaves (Why Does Fall Foliage Turn So Red and Fiery? It Depends) on the New York Times website (www.nytimes.com)

WHAT NOT TO PLANT ACCORDING TO PETER

This is one tree Peter rues planting, ironically known as the Tree of Heaven (Ailanthus altissima). The main tree is long gone. What you’re seeing are suckers, still coming up from the roots two years later. These are regularly mowed off (using a tractor) but keep sprouting, tall and strong.

It’s a good demonstration of just how far a big tree’s roots will spread. Suckers are coming up at least 50m from the original trunk. Peter suspects they go further than that, but the driveway nearby stops them sprouting.

Many others aren’t suitable paddock trees, mostly imported exotics that can become weedy in our climate. They’re often regionally specific; what’s considered a weed in Northland may be a useful and beneficial tree in Southland. 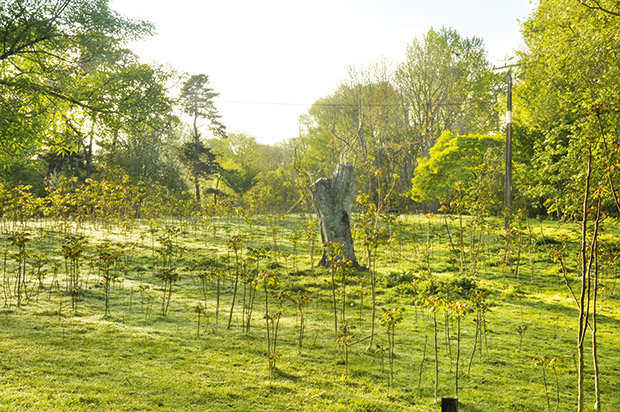 Despite the main tree being cut down more than two years ago, suckers continue to sprout.

Peter and I both like the Taiwanese cherry for its stunning pink flowers that draw tui in by the dozen. DOC isn’t so keen as the birds spread the seeds into native forests, where they sprout like weeds. I also like the strawberry dogwood for its pretty spring flowers, and my pigs enjoy the autumn fruit, but it also infests native bush.

Gleditsia or honey locusts are beautiful trees that fix nitrogen in the soil and drop sweet pods for stock food. But some varieties have thorns long and hard enough to pierce a gumboot. To Peter’s son Robb’s disgust, they’ve even punctured an expensive tractor tyre. If you want to grow a honey locust, choose a thornless variety.

Trees such as yew and oleander are toxic to livestock, and macrocarpa (Cupressus macrocarpa) can cause stillbirths in cattle, sheep, and horses.

Sheryn’s tip: Check with your regional council for a list of banned trees or those not encouraged in your area.

The most beneficial trees for livestock