This old craft is still immensely popular, and encourages a true community spirit on a Golden Bay lifestyle block.

Every winter, Peter Greer invites large groups of strangers onto his Golden Bay block, hands them sharp cutting tools and sends them out to mingle and harvest his willow crop.

It’s an annual winter event not to be missed, a rural working bee and feast with up to 100 people of all ages taking part. He started it over 30 years ago and now it’s something of a tradition, keenly anticipated by those who have participated over the years.

That’s how one fine winter’s day, my partner David and I found ourselves following the ‘Willow Works’ signs up a long driveway with bush and trees on either side, until we got to a shed. We walked with other helpers down a bush track to a clearing by a creek where we could hear the hum of chatter and then rows of people bent over and working. The willow harvest had begun.

How many times do you see that number of people working voluntarily in a paddock, having such a good time chatting and catching up with friends and neighbours? It’s like taking a step back in time to when communities were involved with harvests. Peter Greer is a craftsman and basket maker who uses all the willow for his weaving business. When he started growing willow back in the 1980s he realised it would take him about 300 hours to harvest the crop by himself, a daunting task. Instead he decided to ask his friends around to help and he’d throw have a party afterwards. Now, all the willing participants make an efficient team that can harvest the willow in just three or four hours and feast afterwards.

In the paddock, there are four different varieties of willow which are harvested separately. The rows of willow ‘stools’ have a year’s growth of willow rods of varying lengths and these are cut almost at the base with secateurs.

The rods are then collected and carried, often by children and teenagers, and taken to a central sorting area. Here each variety is dropped into barrels dug into the ground and graded into various lengths before being tied in their respective bundles, then stacked on a trailer. It all runs smoothly, with tea and cake on hand to keep up energy levels. 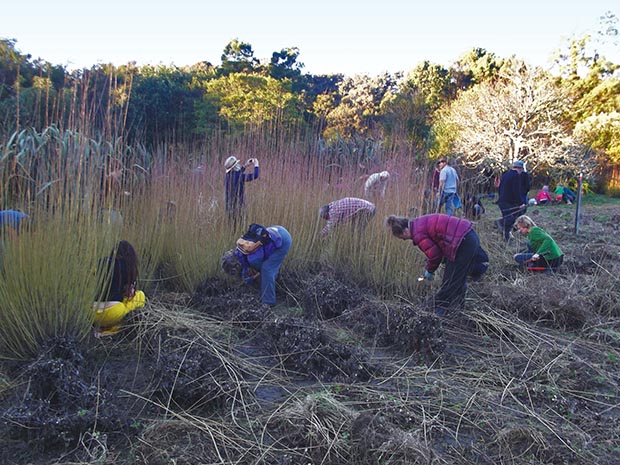 When the final bundle is loaded, approximately half a tonne of willow has been harvested. Backs are straightened in the fading light and helpers drift back to the house that Peter built. Hands are warmed up around the braziers outside and everyone waits for their ‘payment’, created by Peter’s wife Kris and friends. There is never a shortage of food and the feast of locally sourced food is thoroughly enjoyed by the hungry helpers who have shared the satisfying experience of working physically together.

Peter was a builder until his recent retirement, but for most of his working life he’s been a part-time basket weaver as well. The two jobs blended well – when the building work dried up he made baskets. He is self-taught through trial and error and books, his first project a bassinet using supplejack that he made for his firstborn son. He still has it.

He then moved on to using willow, diversifying and expanding the range of baskets over the years.
Now he makes a wide range of wood baskets, laundry baskets, shopping baskets and trolleys, besoms (brooms), umbrellas, willow sculptures and bicycle baskets which are sold at markets, on the internet, and also made on commission. 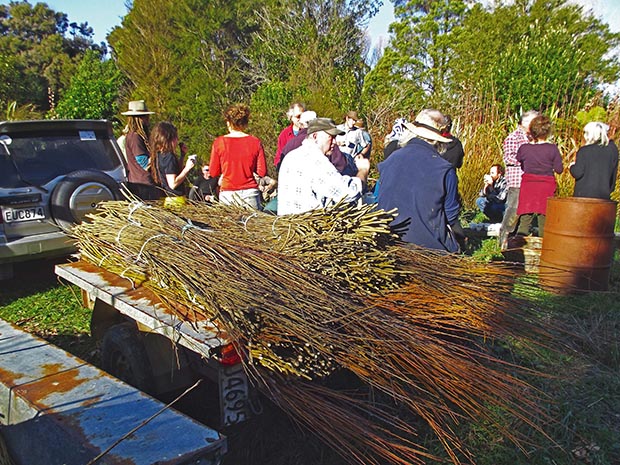 A tea break for the harvest volunteers, with the willow rods loaded on the trailers.

Peter says even after all these years he still enjoys weaving baskets because he’s always coming up with new ideas and making changes so it’s always challenging.

Basket weaving requires just basic tools and most of the willow can be used straight away without preparation. The exceptions are white willow and buff willow. Buff willow is processed by boiling the rods for 12 hours, then stripping off the bark, the tannins having dyed the rods. White willow rods stand in water until the leaves appear and then the bark is stripped off.

Peter has taught hundreds of people to weave baskets through courses he runs twice a year in spring and autumn. These are popular with men and women who come from all over New Zealand to learn this traditional skill and they get to take home two baskets they have made over the weekend course. 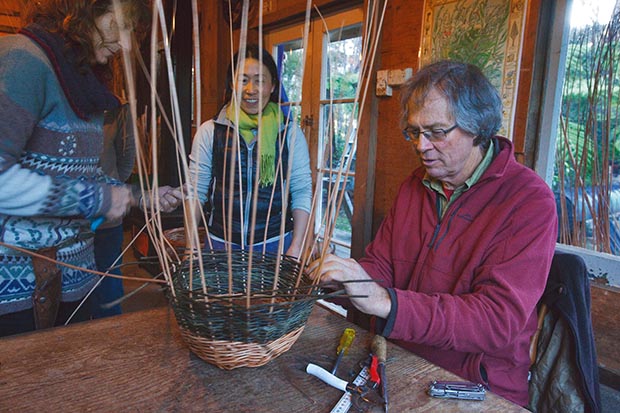 Peter working on a basket.

“There is a lot of interest in learning the craft,” he says.

In a year he estimates he weaves about 100 baskets of varying sizes, taking 4-5 hours to make each one. Smaller ones are more intricate and take almost as much time as a larger one.

“Really it takes a year to weave a basket… some say 40 years!” Peter laughs.

READ MORE: Peter shares how to weave a wattle fence

WHERE EVERY BASKET STARTS Every basket starts out in the paddock, where Peter grows his four varieties of choice on 1000m², or just over a quarter of an acre:

He first planted willow back in 1982, and there is still some of the original crop growing, although he says they need replacing as the plant eventually becomes exhausted.

One planting of willow back in the early days never thrived as the ground was too dry, but when it was replanted in a wetter paddock that floods from an adjacent waterway, the crop markedly improved.

It takes 4-5 years from planting before willow is in full production.

“It’s a lot of work establishing them and attention to detail is important,” he says. “They need to be mollycoddled at first.”

“There is a lot of weeding,” says Peter. “We spend about 100 hours a year with wwoofers, just weeding, as we don’t want to use chemicals.”

Harvest time is in winter when the leaves have fallen and before new buds appear in the spring.
Peter uses almost all of the willow he harvests to make baskets and for teaching the courses, but he also sells rods and cuttings. These are bought by people keen to make living domes and fences or to grow their own willow basket plots.

“This year was a good crop, but pests can reduce the quality of the willow.”

That includes cicadas which damage the stems, and now there is also the willow aphid, an unwelcome newcomer that arrived in the country three years ago and has spread, feeding on the sap and damaging willows.

THE ART OF THE BASKET Basket making has a long history going back to when man first started making tools for himself and the usage of baskets became so important for a variety of purposes like carrying goods and for storage.

By the end of the 19th century, willow basket weaving had started to decline with the advent of modern technology, with the use of plastic products in particular replacing the need for willow baskets. The world’s ‘disposable’ culture rarely values the craftsmanship and work involved in making a hand-made product, especially with imported products like baskets being made so cheaply by overseas labour.

But with renewed interest in learning crafts and more aware consumers wanting to purchase long-lasting and eco-friendly products, this could create a larger market for hand-made baskets produced locally.

Willow baskets are attractive, functional, renewable, recyclable, durable and as far removed from plastic as you can get. Willow baskets don’t harm the planet, and actually benefit it by sequestering carbon as the willow grows. In New Zealand there are only a handful of part and full-time willow weavers, both male and female, but willow may well make a comeback as its popularity increases, with more harvests and feasts for communities
to enjoy.

How to weave a wattle fence